Colorado Women's Hall of Fame announces their Class of 2018 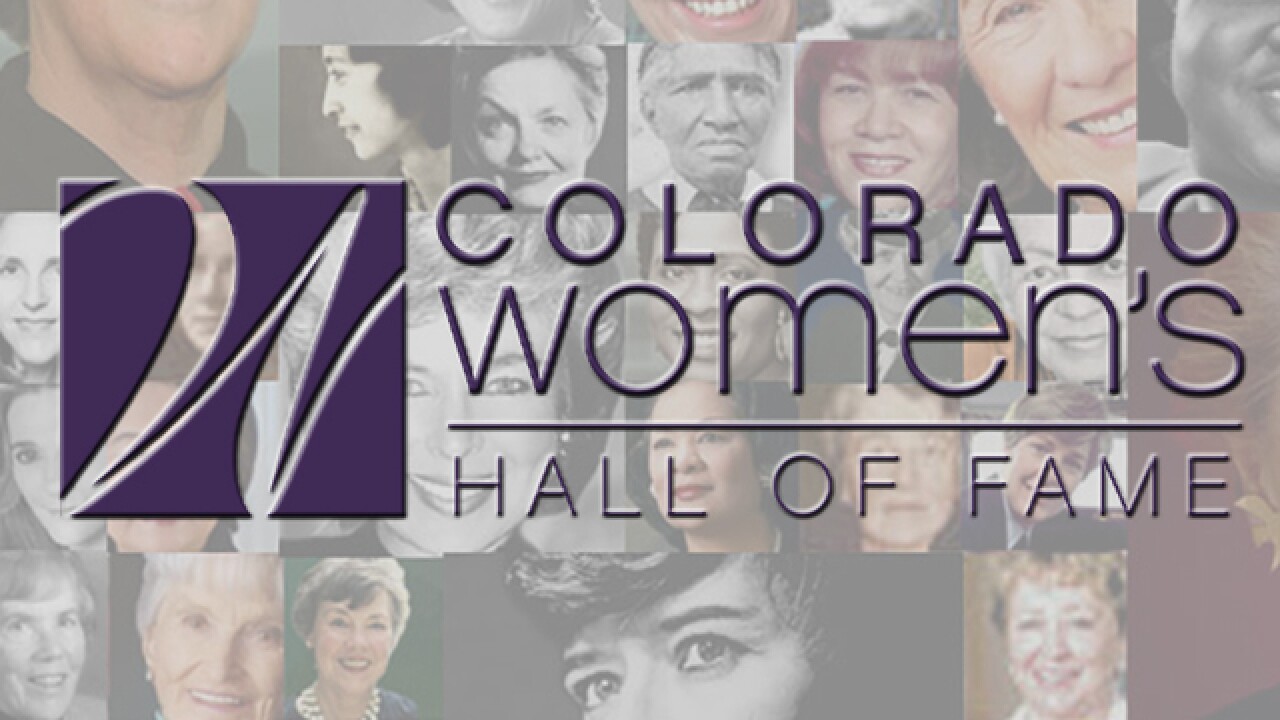 DENVER-- An astronaut, four nonprofit leaders and activists, a university chancellor, a former Colorado Lt. Governor, a journalist and suffragette, an educator of the deaf, and a community builder and cattle owner comprise the Colorado Women’s Hall of Fame Class of 2018.  These ten inductees become the next group of extraordinary contemporary and historical women with significant ties to Colorado, who have made enduring and exemplary contributions to their fields, inspired and elevated the status of women and helped open new frontiers for women and society.

“Extraordinary is the operative word for this class of women,” Beth Barela, Chair of the Colorado Women’s Hall of Fame told Denver7.  “Their beauty, their truth, their grit and grace is extraordinary and they are the unsung heroes of our day.”

Since its founding in 1985, the Colorado Women's Hall of Fame has inducted 152 women from many races, backgrounds, economic levels, career choices, political philosophies, and religious beliefs for their outstanding contributions to society.  The inductees are contemporary and historical and each have not only made exemplary contributions in their fields, but have elevated the status of women, opened new frontiers and been sources of inspiration for others.

This latest class of inductees will officially be welcomed to the Colorado Women's Hall of Fame in March.  Denver7 anchor Anne Trujillo will host that event.

The Colorado Women’s Hall of Fame Inductee Class of 2018 are:

For nearly 30 years, Leslie has devoted her career and her outside activities to transforming the lives of women, children, and people who are transgender by providing positive relationships, resources and a community of support through her work as President of The Gathering Place, a Denver nonprofit organization.  Additionally, Leslie has supported and mentored countless women volunteers, service recipients and professionals who share her desire to improve the world, who value their own strengths, and then who use their strengths to make contributions to improve their own lives and the lives of others.

Gerie Grimes has dedicated and committed her life to the needs of others (especially women and women of color of all ages), building community and using her voice to be a strong advocate for the voiceless. She has dedicated 36 years of her life to Hope Center, originally called Hope Center for the Retarded.  Gerie has dedicated her life to creating the opportunity for all children to have a better early childhood education experience.  She has led Hope Center for the last 12 years.  Her leadership, intelligence and expertise have made Denver’s Hope Center a model for how all children deserve the best education – no matter race or level of capability that society has labeled them.  As Marie Montessori said, ““The most important period of life is not the age of university studies, but the first one, the period from birth to the age of six.”  International research supports this belief.

The first U. S. military woman in space, Susan Helms is a retired Air Force Lieutenant General (LTG) and astronaut who was a crewmember on four space shuttle missions, holds the world record for the longest space walk (8 hours and 56 minutes), and was the first woman to serve on the International Space Station (ISS). She was a member of the first class at the Air Force Academy to include women, flew on over 30 American and Canadian aircraft as a flight engineer and weapons separation engineer (planes including the F-15 and F-16 fighters), and retired in 2014 as a three-star general after serving as the first female commander of Vandenberg Air Force Base.

LTG Helms is a resident of Colorado Springs, where she lives in the home she purchased in 2002, intending to retire there. She is a 1980 graduate of the Air Force Academy. She returned to the academy from 1985 to 1987 to teach aeronautical engineering and was assigned to the Air Force Space Command at Peterson Air Force Base from 2002 to 2004.

Susan Helms is a passionate believer in the power of diversity.  She has experienced this power in her space missions, as a three-star general in command of 20,500 personnel at Vandenburg, and now as she serves on several Boards.  She sees that diversity is the difference that can elevate the results.

Dorothy Horrell - Education Professional and Administrator, Chancellor of the University of Colorado Denver

As a community college president, leader of the state system of community colleges, foundation executive, chair of a higher education governing board, and now university chancellor, Dorothy Horrell has a proven record of transformative leadership. Throughout her illustrious career, she has been a trailblazer, often serving as the first or only female in her position, and along the way has inspired countless others to realize that their full potential.

Raised on a farm and ranch homesteaded by her grandfather in Northeastern Colorado, Dr. Horrell’s roots run deep in the “Centennial State.”  She earned her first paycheck by working summers at the Cherub Home, a residential facility for developmentally disabled children in Holyoke.  Her professional career began as an Adams County high school teacher, moving from there into state administration at the State Board for Community Colleges and Occupational Education.  From there she rose through the ranks to become the first female Director of the Division of Occupational Education, President of Red Rocks Community College for 10 years.  After almost 30 years as an educator, she entered the non-profit sector as President for the Bonfils-Stanton Foundation.  In 2016, Dr. Horrell became Chancellor of the University of Colorado Denver, where she remains today.  Her career choices are highly influenced by her belief that education is an instrument of hope.

Fay Matsukage is an accomplished attorney with a reputation for professionalism and integrity who has dedicated her life and career to furthering the interests of women and those of Asian Pacific descent. Her civic engagement, humility, courage under adversity, work ethic, and her contributions to the Colorado community exemplify the values of the Colorado Women’s Hall of Fame.  She epitomizes her belief that we are all individuals with our unique gifts and it is our responsibility to serve others based on those gifts.

Today, she practices law at the Doida Law Group, LLC, Ms. Matsukage is one of the few female subject matter experts in securities law with her level of seniority and experience. She also has made considerable, long‐term contributions to the legal field and to the Asian Pacific Community. From the beginning of her career, Ms. Matsukage worked in a male‐dominated field as a woman of Asian descent and faced the daily challenge of proving herself as a professional and as an equal. She was inspired by these challenges to start charitable foundations that are so well funded to this day they provide annual scholarships and other charitable contributions to women and individuals of Asian descent.

Gail Schoettler was the first woman to be both Colorado’s Lt. Governor (elected in 1994) and State Treasurer (from 1987 to 1994).  She narrowly lost the election to be Colorado’s governor in 1998.  Prior to working for the State, she had been involved in founding the Children’s Museum of Colorado, based in Denver.  In 1976 she joined the organizational group to file for a National Bank to be located in downtown Denver to serve the needs of small businesses.  The preliminary approval was awarded by the comptroller of the U. S. Currency on 7/7/77.  After raising the $2 million capitalization required, in 1978, she helped found the Women’s Bank N. A. in Denver.  In 1984, Equitable Bankshares of Colorado was formed to own the Women’s Bank and Equitable Bank of Littleton, which Gail chaired.

In 1979, she was elected to the Douglas County Board of Education and served for eight years; she became president beginning in 1983.  That same year, she was named Executive Director of the state’s Department of Personnel under Governor Dick Lamm. In 1986, Schoettler was elected State Treasurer, where she served two terms managing the state’s assets.  In 1994, she was elected Lieutenant Governor with 55% of the vote on a ticket with then-incumbent Governor Roy Romer.

Beyond politics, Gail served as US ambassador to negotiate a global telecommunications treaty in 2000—189 countries, 2800 delegates, in Istanbul for 5 weeks of successful negotiations. The outcome of this treaty positively impacted the development of wireless technology and the capabilities that we use today on our cell phones as well as policies that impact terrestrial and satellite services for the US.    She is one of founders and first president of the International Women’s Forum with forums in 45 countries and thousands of women leaders from all fields worldwide who are members.

Long-standing Colorado resident, Mae Boettcher influenced our state and its citizens as a culture-altering pioneer - a figure who led Colorado in its transition from cow-town days into an era of sophistication through her dedication to higher education, championing children's and women's healthcare, and her selfless philanthropy. Well-respected for decades of tenured leadership with The Children's Hospital and the Boettcher Foundation, her legacy of devotion continues to touch and alter the lives of countless Colorado residents.

She is also celebrated as one of Colorado's first female pilots and a member of the historic Amelia Earhart's 99s, founded in 1929 by Amelia Earhart.

Ellis Meredith is often called the “Susan B Anthony of Colorado” as she was a leader in the women’s suffrage movement in Colorado who also worked nationally for the women’s vote after Colorado gained suffrage in 1893.  She continued to work for American women’s right to vote until the 19th Amendment was finally ratified on August 18, 1920, 27 years after Colorado passed our bill.  Meredith was a journalist who wrote for many Colorado newspapers as well as several national magazines.

Although born in Montana in 1865, Meredith’s family moved to Colorado not long after when her father began working as an editor for the Rocky Mountain News.  She was a Denver resident until 1917 when she moved to Washington D.C.  As a journalist she worked for the Rocky Mountain News for many years writing a column called “A Woman’s World” in 1889 where she promoted many progressive issues and also published articles on women’s suffrage for several other Colorado newspapers.

The impact of Doreen Pollack’s method for teaching children who are deaf to listen and talk has literally been “heard” around the world.  She was a true pioneer in the field of speech pathology and audiology at a time when the medical community did not believe anything could be done for the profoundly deaf child.  Her intellect, dedication and tenacity changed the way we look at, address and treat children with hearing loss both in Colorado and internationally. She immigrated to the United States in 1948 after graduating from London University, moved to Denver in 1951, and lived in Colorado for the remainder of her life.  In 1970, she founded the non-profit The List Foundation in Denver which continues to support families and children who use her methods today.

Amache (Walking Woman) “Amy” Ochinee Prowers was a full-blooded member of the Southern Cheyenne tribe, born in 1846 in the eastern Plains of what is now Colorado.  She and her husband John Wesley Prowers operated a successful cattle-ranching and mercantile business at Boggsville, one of the region’s earliest American settlements, to which Amache contributed her own land, labor, and skills.  At a time when Cheyenne society was under severe attack by Anglo incursions and undergoing dramatic changes, Amache chose the path of an innovator and mediator – successfully negotiating the boundaries between her own Cheyenne culture and language and that of the Euro-Americans (Mexicans and Americans alike) who had intruded into her tribal lands.