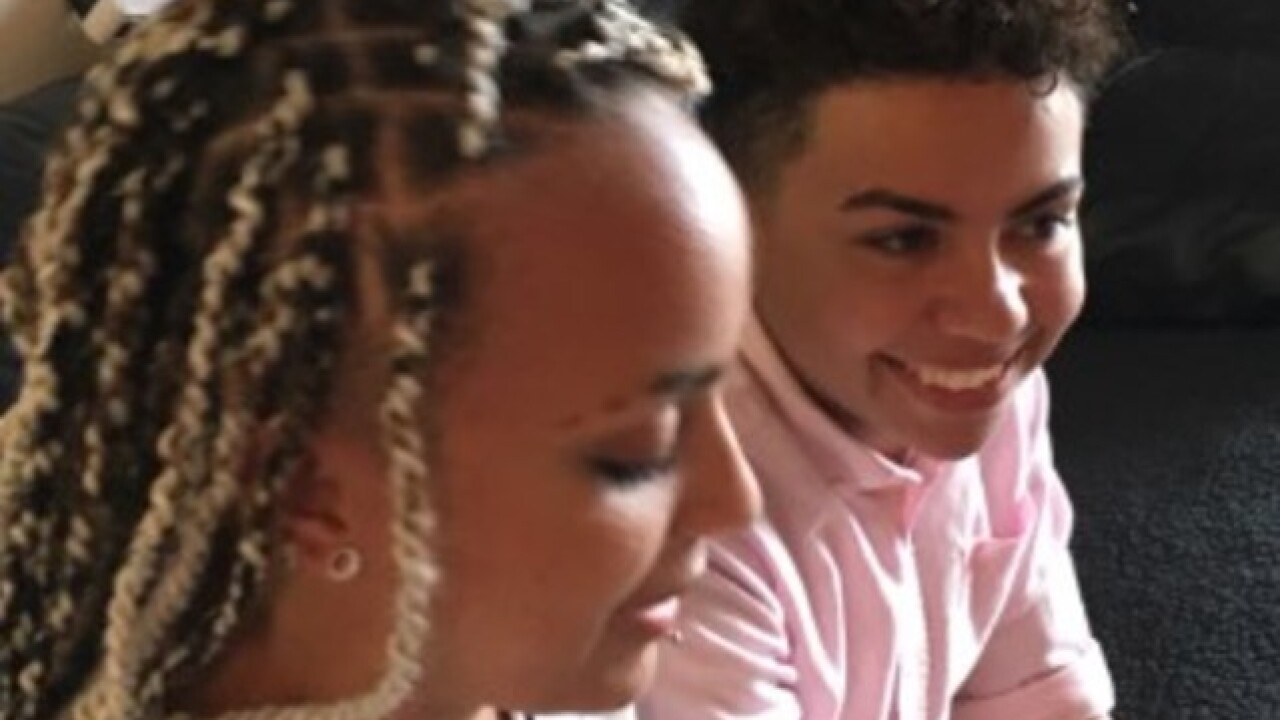 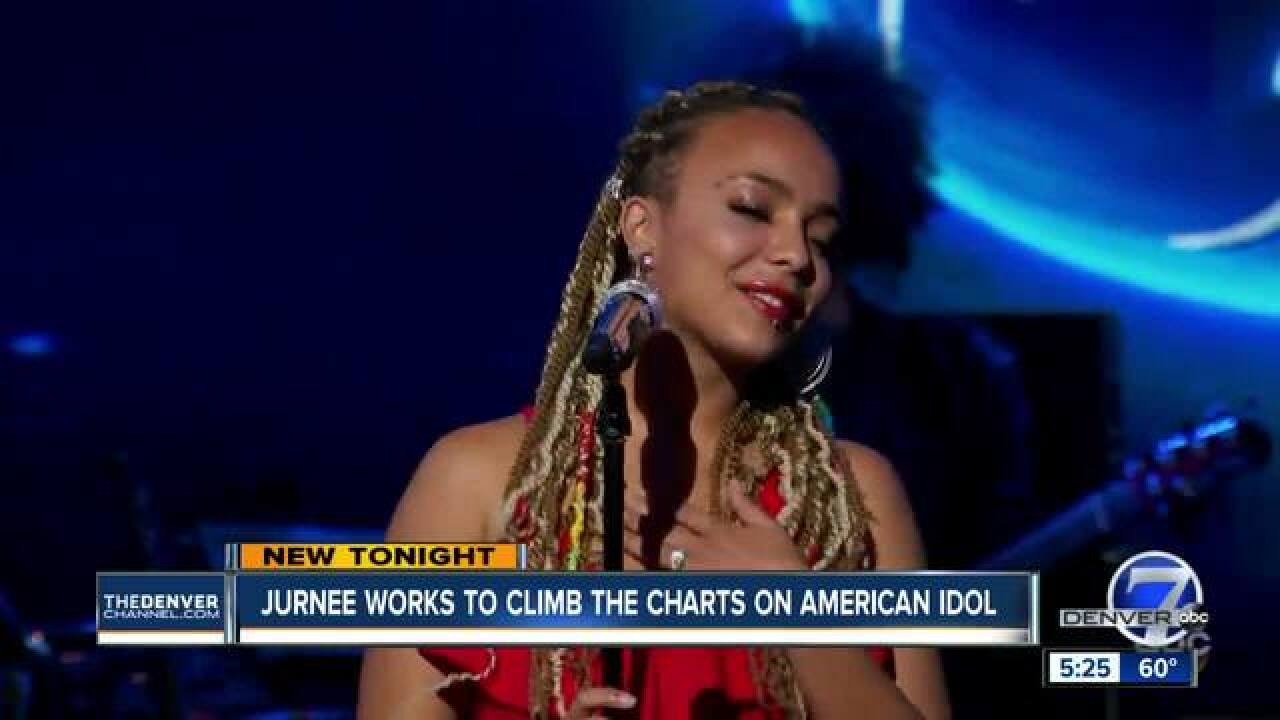 COLORADO SPRINGS, Colo. -- Angelic voiced Jurnee Weathers began performing with her voice when she was 10-years-old.

"I remember the first thing I got to do was the fifth grade musical," she said. "The teacher gave me the leading part and I told my mom, 'I think I can actually do this. I want to keep auditioning for things.'"

She said she tried out for X-Factor when she was 13, but didn't get past the producers.

Five years later, the Colorado Springs teen is competing on American Idol. It's not her first go-round. She'd tried once before.

"I was nervous and had no idea what I was getting myself into," she said. "It was very stressful and hard."

The 18-year-old singer explained that during her first time on "Idol," she was in a "terrible relationship," and got "cut" in group rounds, and then went home and stopped singing.

"I didn't sing anywhere, I didn't do any gigs," she said.

Fast forward to this season, and Jurnee is belting out tunes again and is trying to climb her way to the top on "American Idol." She attributes the turnaround to a new love.

"I met her at a party," she said, referring to Ashley Weathers. "We started dating the first day because there was an instant connection."

That instant connection reignited Jurnee's competitive spirit, led to a 360 degree turnaround and a desire to audition again on "Idol."

"As soon as I found her, I found a part of myself," the singer said. "She motivates me and loves me."

"I really fell in love with her the first time she sang," Ashley said. "I just sat there in awe, like, 'I'm going to marry this woman right here,' and I did."

Jurnee and Ashley have been married for eight months.

"She's crushing," Ashley said. "To know that I'm the driving factor behind her is crazy, because she's what I wake up for every morning when I put on my uniform and look at myself in the mirror."

Ashley, a soldier stationed at Fort Carson, was able to make the trip to California to see Jurnee compete in Hollywood.

"I saw her make the cut to the top 24," she said. "Every time she sings, it's like an angel singing. It's beautiful."

When asked if Jurnee writes songs to her, Ashley replied, "Oh yes! She's written me songs. There was one she wrote to tell  me she loved me. It was the most beautiful song ever. I cried. I still have a recording of it, (on my cell phone) and we listen to it all the time."

"We recently named it the 'I love you song,'" Jurnee said.

The teen singer said the competition on this year's edition of "American Idol" is very tough.

"It's a bunch of competent minded people who know what they want, have the same dream and the same goal," she said. "It's easy to walk into a room and say, 'I want this more than anyone else,' but then you compare yourself to everyone else and wonder who's been working harder, and it really motivates you to do more."

Jurnee told Denver7 that while they are competitors, "at the end of the day, we are friends and learn so much from each other."

She said she's learned to be more confident from Ada Vox, another member of the LGBTQ community, and how to chill from Maddy Poppy.

"Her pitch is perfect," Jurnee said.

When asked if she came out to her family early, Jurnee replied, "I never knew I needed to hide it."

"I was born liking girls," she said, "so I never knew it was a weird thing to do."

Jurnee said she had her first crush in high school.

"I told mom, 'I have a crush on the quarterback,' and she's like, 'okay, cool.'  And I was like, 'the quarterback is a girl, did you put those two together?' And she was like, 'Alright, that's fine.' They were accepting of it."

The Idol contestant is a prolific song writer, but, ironically, can't read music.

"I play the guitar," she said, "and I write music, but can't read it. It's all by ear, all by looking at things, pictures and colors. I really have to match lyrics and the keys they're at with colors, or with what I was thinking of when I was singing that, to remember."

"It's crazy," she added. "When I was in 6th grade, I wrote two lines to a song, and then just the other day, I was in the shower and it was just stuck in my head, and all of a sudden I wrote the whole rest of the song."

"Sometimes we'll just be sitting in the car driving somewhere and I'm like, 'Oh my God, I have lyrics. Hold on, hold on," Jurnee said. "It just comes to me."

"If she just randomly pulls out her phone and goes to her notepad, I know she's writing lyrics," Ashley said.

Jurnee said she wrote "Unstoppable" when she was being bullied. "I actually got a tattoo for it," she said. "It actually became the anti-bullying song for Littleton for that whole year, for middle schoolers."

The "Idol" contestant said she got her first guitar for Christmas when she was in 6th grade. She used it, until it couldn't be played anymore. She's glued several jewels to the front of her current guitar.

"I bedazzled it," she said. "I bedazzle everything."

When asked if she "bedazzled" her first guitar, she said, "I painted it lime green. I think once a guitar can't be played anymore, I'm just going to turn it into an art piece and hang it."

"You'll see me and my best Dione Idol, Ada. We're both singing with Lea Michele."

When asked how it turns out, the golden voiced teen, replied, "The rest is yet to come."