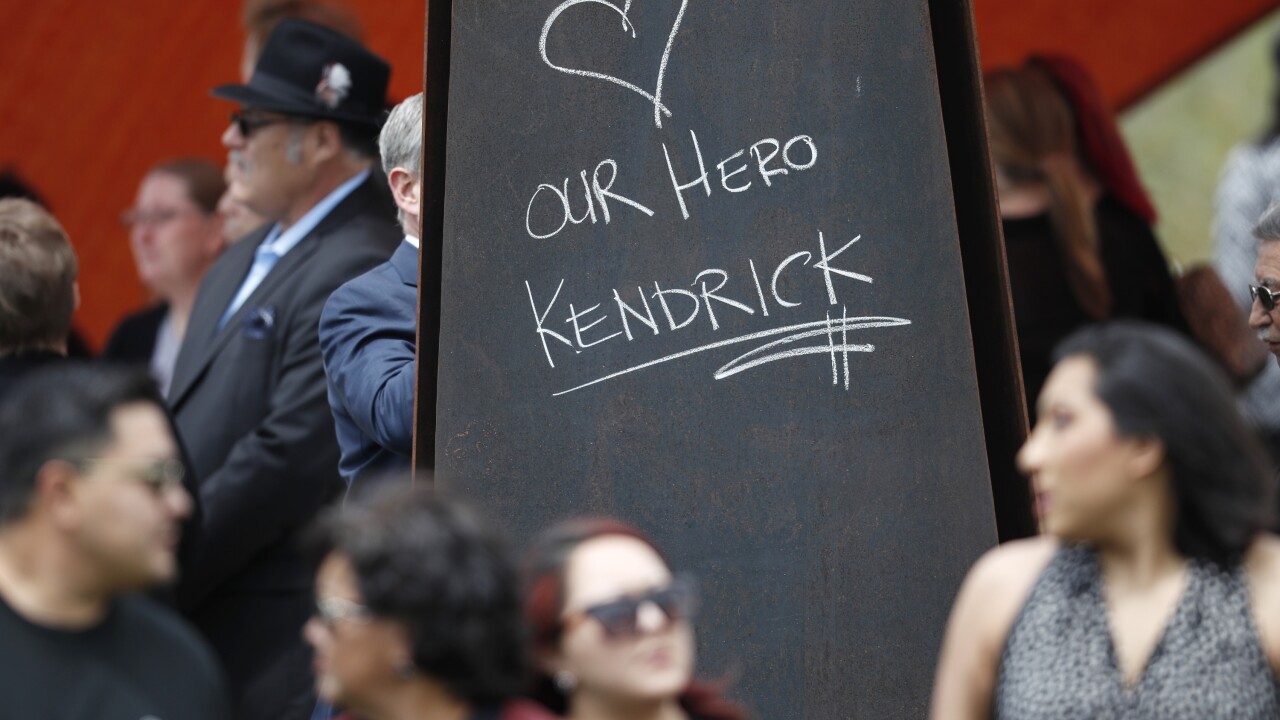 (Copyright 2020 The Associated Press. All rights reserved. This material may not be published, broadcast, rewritten or redistributed.)
David Zalubowski/AP
Mourners pass by a tribute written on a steel beam after the burial of Kendrick Castillo, Friday, May 17, 2019, in Littleton, Colo. Castillo was killed while trying to stop a gunman in his school, STEM School Highlands Ranch, last week. (AP Photo/David Zalubowski)

DENVER – The Colorado Division of Criminal Justice is receiving $2.8 million in grant money from the U.S. Department of Justice to put toward mental health and recovery programs that help the victims of the STEM School Highlands Ranch shooting.

The DOJ’s Office for Victims of Crime announced Thursday the $2,878,767 Antiterrorism and Emergency Assistance Program grant, a grant program which started after the Oklahoma City Bombing to help victims of terrorism and mass violence.

Colorado will use the money to reimburse the STEM Center for Strength and other organizations that help with mental health services, victim compensation and security for victims at court.

The STEM Center for Strength opened after the shooting with support from the AllHealth Network, Colorado Organization for Victim Assistance and Office of Victims of Crime to provide mental health services, counseling and resources to the STEM School community on-site.

The resiliency center has been providing virtual support through telehealth and group online meetings during the pandemic, and some of the reimbursement will go toward the therapists and coordinator at the center.

The grant money will also help reimburse meetings between the community and school crisis and bereavement teams, training for mental health workers, and mental health support for first responders.

Some of the grant money will also go toward providing support and security to victims who have to attend court proceedings.

“The disruption of so many young lives – and the horrific death of one child – continues to send ripples of sorrow through the Highlands Ranch community,” said Jessica E. Hart, the director of the Office for Victims of Crime. “There remains important work to be done and I hope this funding answers the call for assistance by the organizations that provided crisis response services in the immediate aftermath and that continue to serve the victims, their families, and the community.”

Kelly Kissell, the manager for the Office for Victims Programs in the Colorado Division of Criminal Justice, said the division was grateful for the money.

Her office met with the STEM community to identify what resources they might need for victims support in the wake of the shooting and made the request for the grant money based on those needs, Kissell said.

She said that her office asks communities any time they have an event like the school shooting if they would like the financial support and that it is not always needed. She said the last time a complete grant request was made through the Antiterrorism and Emergency Assistance Program was after the Aurora theater shooting.

“It’s a crucial resource to provide support for agencies giving support to the victims,” she said. “…It’s a part of the healing process.”

Kissell said that that her office would be working with the agencies that will be reimbursed with the grant money in the next week and would likely have the money out within a month.

“My hope is that the end effect is that this is one worry [the victims] don’t have to have,” Kissell said. “On top of the trauma they’ve experienced, they know they can get therapy and don’t have to worry about medical bills. Resiliency centers are a place to gather and get therapeutic resources and find positive ways to re-engage.”

“Our community has carried a heavy burden from gun violence and it is critical that we support our families, students, and educators in their path to recovery from the STEM shooting. This federal grant is tremendous news and will play a pivotal role in helping our survivors move forward,” he said in a statement.

Gov. Jared Polis said he was hopeful the money would help continue the community's recovery.

“I keep Kendrick Castillo and his family in my heart,” said Polis in a statement. “It’s our hope that these resources will help other victims and the community impacted by this tragic crime cope with the trauma that has changed their lives.”

Kendrick Castillo, 18, was killed in the shooting on May 7, 2019 and eight others were injured. There were hundreds of other students, teachers and staffers at the school that day and dozens of officers, deputies and emergency personnel who responded to the scene and were directly or indirectly impacted.

One of the shooters, Alec McKinney, was sentenced in July to life in prison with the possibility of parole. The other suspected shooter’s trial is expected to start later this year.

Funding for the grants comes from fines and penalties paid by people convicted of crimes in federal court.