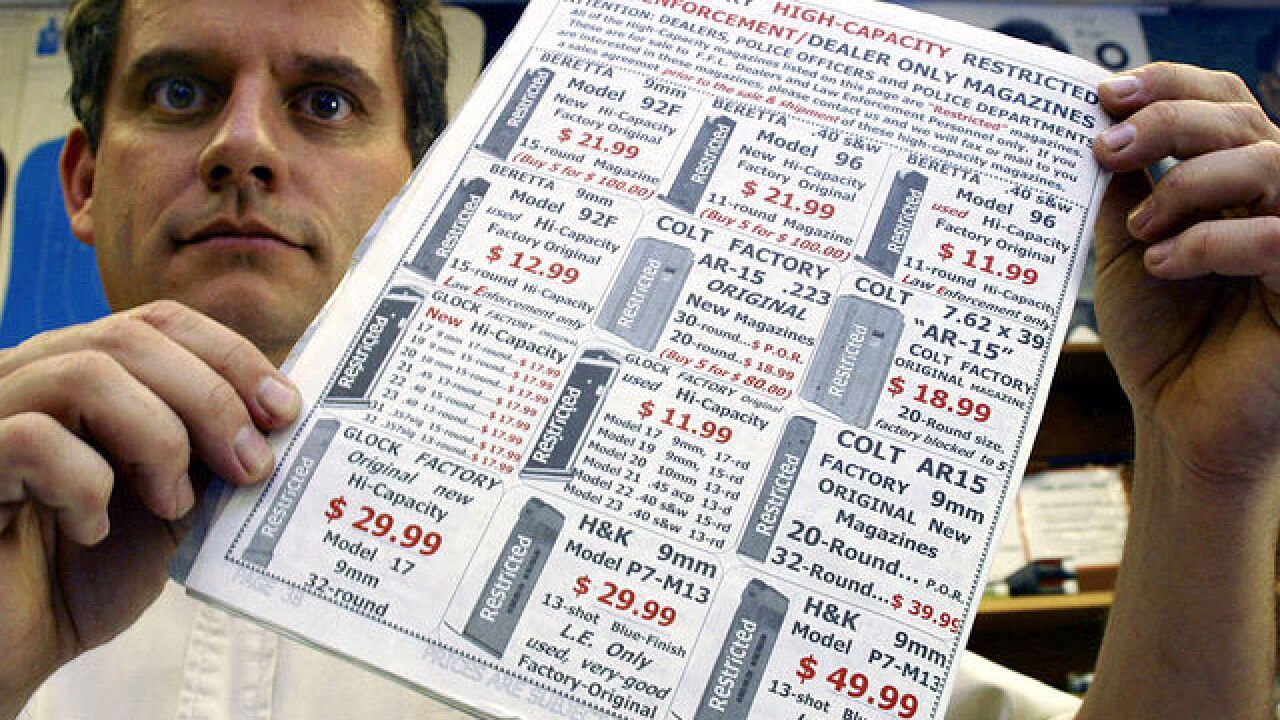 2004 Getty Images
Mario Villafuerte
<p>BOSSIER CITY, LA - SEPTEMBER 11: Paul Murray, manager of Shooters USA target range displays an advertisement for high-capacity magazines on September 11, 2004 in Bossier City, Louisiana. Most high-capacity magazines are only legal for law enforcement officers but when the Assault Weapons Ban expires at midnight Monday September 13 many will be legal to purchase. (Photo by Mario Villafuerte/Getty Images)</p>

DENVER – Two bills introduced in the Colorado Legislature aim to again allow high-capacity magazines in the state and to eliminate a state ban on so-called “gravity knives” and switchblades.

Senate Bill 7, which is sponsored by Sen. Vicki Marble, Rep. Stephen Humphrey and Rep. Lori Saine – all Republicans – would eliminate a section of state statute that bars “large-capacity magazines.”

The statute also banned the possession, sale or transfer of any large-capacity magazines after July 1, 2013, and required any person in possession of or manufacturer who was making such magazines at the time to have a stamp or marking noting it was made after that date.

The bill, which was assigned to the Senate State, Veterans and Military Affairs Committee, would repeal that entire section of state statute.

The bill also contains a so-called “safety clause” that declares that the Legislature finds the bill “necessary for the immediate preservation of the public peace, health and safety.”

The Senate voted to repeal the magazine limit last year, but that bill died before reaching the governor’s desk.

The issue has gone to court several times since Gov. Hickenlooper first signed the high-capacity magazine ban in 2013 but has never been overturned.

OTHER BILL WOULD ALLOW ‘GRAVITY KNIVES’ AND SWITCHBLADES

Gravity knives are currently defined as “any knife that has a blade released from the handle or sheath thereof by the force of gravity or the application of centrifugal force.” Switchblades are defined as “any knife, the blade of which opens automatically by hand pressure applied to a button, springs, or other device in its handle.”

The proposed bill would remove those two types of weapons from a section detailing the possession of “a dangerous or illegal weapon,” but would leave in place bans on metallic knuckles, blackjacks and gas guns.