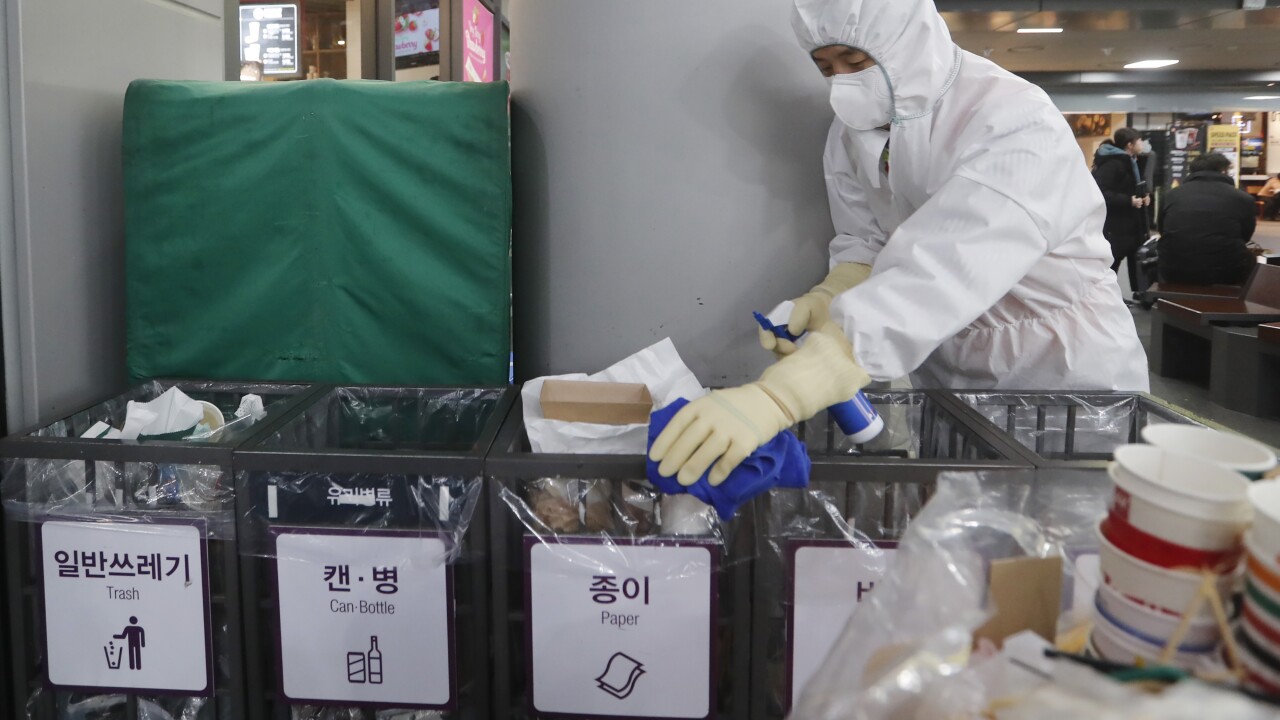 (Copyright 2020 The Associated Press. All rights reserved. This material may not be published, broadcast, rewritten or redistributed.)
Ahn Young-joon/AP
An employee works to prevent a new coronavirus at Suseo Station in Seoul, South Korea, Friday, Jan. 24, 2020. China broadened its unprecedented, open-ended lockdowns to encompass around 25 million people Friday to try to contain a deadly new virus that has sickened hundreds, though the measures' potential for success is uncertain. (AP Photo/Ahn Young-joon)

DENVER – Colorado health officials say they are closely monitoring the coronavirus and its spread, though there have so far been no confirmed cases of the virus, which has led to quarantines in China, in Colorado.

The Centers for Disease Control announced Friday that a second person in the United States was confirmed to have contracted the virus. The confirmed cases involve a person in Washington state and a woman in Chicago who traveled to Wuhan, China – one of the epicenters of the outbreak – in mid-January.

The Colorado Department of Public Health and Environment said Friday there were no cases in Colorado of the virus, whose strain is called 2019-novel coronavirus (2019-nCoV).

However, CDPHE said it investigated a person in northern Colorado who had recently traveled to Wuhan. The department said its investigation and CDC testing determined the person tested negative for the 2019-nCoV.

And St. Anthony Hospital in Lakewood said Friday afternoon said it was working with CDPHE on a possible coronavirus case there. A hospital spokesperson said a person was admitted around 2:45 p.m. with a respiratory illness so they are taking precautions and have placed the patient, an adult, in an isolation unit.

“On Friday afternoon, Centura - St. Anthony Hospital received a patient with a reported respiratory illness. In collaboration with the Colorado Department of Public Health and Environment, we are investigating a possible case of novel coronavirus in an individual with a history of travel from Wuhan. Results of this test from Center for Disease Control and Prevention (CDC) will not be available for several days,” St. Anthony Hospital spokesperson Gianna Lisac said in a statement.

“As with many new cases, upon the patient’s arrival, Centura takes all proper precautions recommended by the CDC. This includes that the patient don a mask and be placed in an isolation unit as a precautionary measure until diagnosis. The health risk to the general public is considered low,” Lisac added.

“Though Colorado has no cases of the 2019-novel coronavirus (2019-nCoV), we’re taking it very seriously, closely monitoring the outbreak and developing Colorado’s response,” said Deanna Herbert, a spokesperson for CDPHE’s Division of Disease Control and Public Health Response.

Herbert said CDPHE was putting together teams to start working on infection control, case investigation, contact and communications plans in the event a case is confirmed in Colorado. And she said the department was “working closely with health care providers and local public health agencies across the state, sharing reporting, testing and infection control guidance.”

As of Friday, there were 63 possible cases in 22 states that were under investigation. Only the two cases had so far been confirmed, the CDC said.

There are several different types of coronaviruses, and some are common in the U.S in the fall and winter, CDPHE said. Herbert said MERS-CoV and SARS-CoV are among the other types that have caused international outbreaks in the past. The symptoms of coronaviruses typically include respiratory illnesses, fever, coughing and shortness of breath, and they often spread through coughing and sneezing.

“It is too soon to know how severe 2019-nCoV is compared too other coronaviruses or how easily it can spread between humans,” Herbert said.

But Herbert added that the health risk from 2019-nCoV is “low” despite the overall public health concern.

“Just as we recommend for other respiratory viruses, the best way to remain health is by washing your hands and staying away from others who are ill,” Herbert said. “And, if you become ill, practice good health hygiene (washing your hands, covering your coughs) and stay home when you are sick.”

There are enhanced screenings in place at five major airports – ATL, Chicago O’Hare, LAX, JFK and San Francisco – but not at Denver International Airport.

Anyone with more questions about the coronavirus and the CDC investigation can click here for more information.