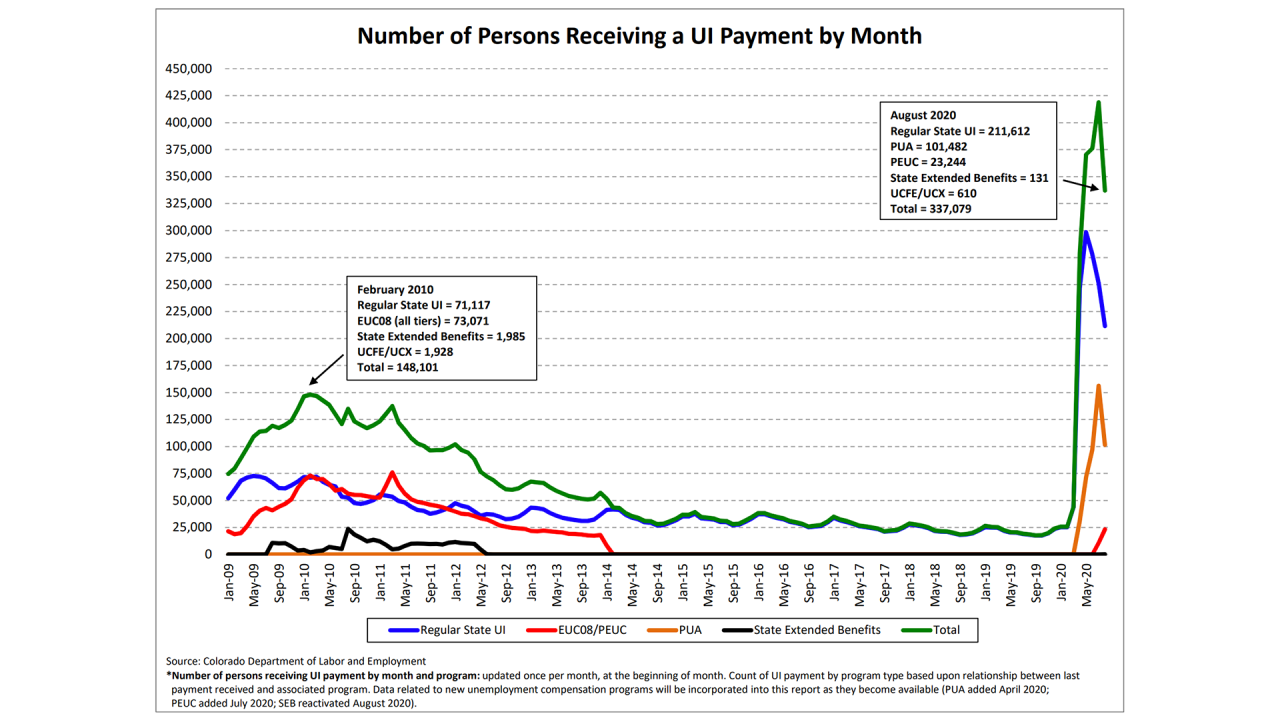 Copyright 2020 Scripps Media, Inc. All rights reserved. This material may not be published, broadcast, rewritten, or redistributed.
Colorado Department of Labor and Employment
This chart shows the increase in various types of unemployment payments made by Colorado over the past decade and how the pandemic compares with the Great Recession.

DENVER – The Colorado Department of Labor and Employment said Thursday that around 48,000 federal Pandemic Unemployment Assistance claims for self-employed workers filed between mid-July and late August were found to be fraudulent.

The department revised the July 18 – Aug. 22 PUA claims down from 62,498 to 14,292 after getting rid of the fraudulent claims, which CDLE officials said Thursday were made sophisticated and orchestrated fraud rings operating both nationally and internationally.

The CDLE officials said they had put in 17 fraud detection triggers since mid-June that was catching some of the fraud that the department has previously discussed, but that an 18th trigger has proved beneficial in further identifying the fraud. The roughly 48,000 fraudulent claims represented about $40 million in benefits, officials said.

In total, the state said it had stopped between $750 million and $1 billion in fraudulent claims from going out the door since mid-June – nearly all of that federal dollars, which are used to pay out PUA benefits.

CDLE officials said Thursday that the PUA fraud problem is widespread across the country and that the fraudsters are becoming more sophisticated in their methods. While the department has removed those roughly 48,000 claims already, officials said there are still other claims that staffers are trying to sort out whether they are fraudulent or made by real people.

Unemployment Insurance Division Director Jeff Fitzgerald said the 18th trigger had stopped thousands of instances of the fraud for the last week of August and first week of September. He said that the increasingly-sophisticated fraud would be something “a common individual would not be able to do” but that he could not elaborate further on what the 18th trigger was so as to not aid criminals in getting around it.

In August, the department said that they were blocking between 30% and 50% of fraudulent claims. That was before the 18th trigger was implemented, officials said Thursday.

CDLE Deputy Director Cher Haavind said PUA – the program for unemployment assistance for self-employed, gig workers and contactors – was the main target because it does not have the same wage verification measures regular unemployment has and people mostly self-attest to their financial and unemployment situations.

She said that the federal government had announced $100 million in funding was available for states to augment their PUA fraud detection systems and that Colorado would be applying for the $2.4 million that is available for it.

Fitzgerald said that the fraud investigation team as a whole is now comprised of around 60 people. In 2019, there were five people working the criminal investigations unit, he said. Haavind said the department continues to work with the Colorado Attorney General’s Office, U.S. Secret Service, FBI and local district attorney’s offices to investigate and prosecute fraudsters.

The CDLE officials confirmed that the Lost Wages Assistance program benefits would start being distributed at the end of next week to the roughly 94% of unemployed Coloradans who are eligible.

The program will provide Coloradans who are eligible $300 a week on top of their regular benefits as long as they are receiving at least $100 a week in unemployment benefits of some kind – whether they be regular benefits from the state or benefits through a federal program, like Federal Pandemic Unemployment Assistance.

Haavind said that Colorado was already approved to pay benefits for the LWA program backdated to the weeks of July 26 through the week ending Aug. 29. Colorado has also applied for a sixth week of benefits, through Sept. 5, and officials said they should know soon if that week is approved by FEMA and the U.S. Department of Labor – which have both said there will be no further LWA benefits after the possible sixth week for any states.

People receiving PUA benefits will not have to take action to receive the LWA benefits, but people receiving regular unemployment benefits will have to certify with the CDLE they are out of work as a result of COVID-19. The CDLE virtual tool will be enabled to do the certification, officials said, which should only take “a minute or two,” according to Haavind

Last week marked the second week in a row in which regular unemployment initial claims were under 6,000 for the week, with 5,974 regular initial claims and 2,216 PUA claims filed last week. More than 700,000 regular and PUA initial claims have been filed since mid-March.

The state paid out $60.5 million last week in regular unemployment benefits and has now borrowed $191 million from the Federal Unemployment Account, which the state will do at zero-interest through the end of the year to continue paying regular benefits.

Senior Economist Ryan Gedney said that 70% of the initial claims activity the state has seen since the pandemic hit came during the mid-March to first week of May period and that there was a substantial drop of continued claims for the week of Aug. 29, indicating more Coloradans were becoming re-employed as the number fell by 11% since the week of Aug. 1.

The department expects to release August unemployment figures for the state next Friday. July's unemployment rate was 7.4% in Colorado.