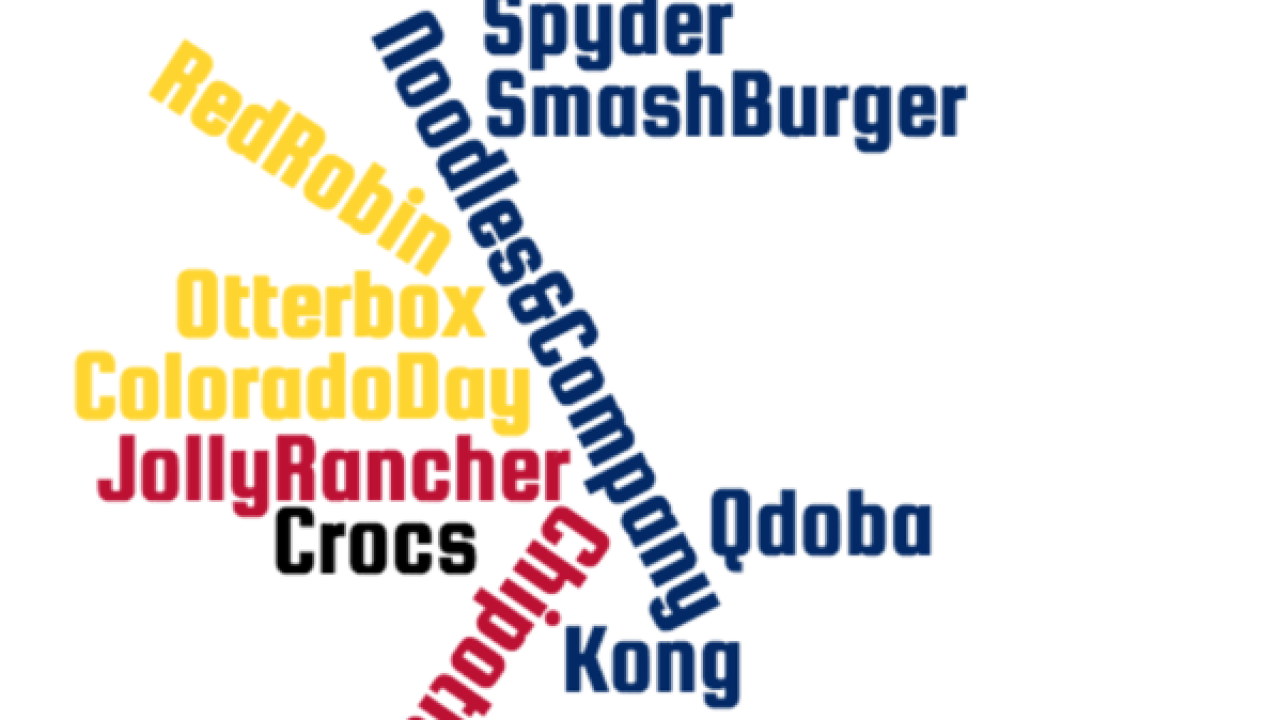 DENVER -- As Colorado Day -- the day Colorado became a part of the union -- approaches for its 140th celebration, many will support local businesses. However, many don't know a host of national brands and icons were born in the Rockies, so to speak.

The rugged smart device case company was founded in 1991 in Fort Collins, formed out of the garage of Curt Richardson, the founder of the company.

Business took off in 2004, when consumers began buying iPod cases. Since then, the brand has become an international name for its quality cases protecting valuable electronics.

Across the globe, extreme sports enthusiasts have certainly heard the name Spyder. Known for the iconic black widow logo, the Boulder-based company has humble roots.

Founder David Jacobs started the company as a mail order business out of his Colorado kitchen, marketing high-quality ski goods to racers who enjoyed the Rockies. Since then, Spyder has become the largest ski-specialty brand on the globe.

Although picturing Dish Network might conjure images of satellites and high-tech gear, the company is very much ground-based in Meridian, Colorado.

Started in 1980, the company provides services to over 10 million customers and employs nearly 20,000 across the globe.

The group launched its first satellite in the 1990s, which is when the company changed its name to how it is currently known.

A relatively new company has taken the footwear world -- like it or not -- by storm. Colorado has the pleasure of calling Crocs a local company.

The rest is history, as the company -- which employs roughly 5,000 across the country -- has become one of the most popular footwear manufacturers in the nation.

WOOF! This Colorado-based company operates one of the largest companies manufacturing dog toys, and their rubber formula is recognized as one of the best for pet owners.

The company, founded in 1976, has patented its trademark shape, but also produces a host of other successful toy lines.

Burritos. Who knew Colorado would be known for them? Two of the best-recognized brands for fast-casual Mexican dining in the nation are based in Denver and Lakewood respectively.

Chipotle, although it has gone through hard times for its hepatitis and E. coli outbreaks, has reformed its brand based on fresh, quality ingredients. The company employs nearly 50,000 across its 2,000 establishments in the U.S.

Qdoba Mexican Eats has just a quarter of the locations boasted by Chipotle, but is popular across the U.S., with some locations in other nations. Although Qdoba is owned by Jack in the Box, it operates as a Subsidiary, wholly based in Lakewood.

Another Colorado fast food chain boasts several hundred locations across most states and a handful of countries. Smashburger calls Denver, Colorado home, and is beloved by many. The company is one of the few fast food options that severs alcohol.

Still a growing company, Noodles & Company started off slow when it was founded by Aaron Kennedy in 1995. Based off other Asian noodle restaurants, Kennedy hoped to distinguish his fast-casual restaurant as a hub for noodle dishes, soups, salads and sandwiches.

Fondly called "Noodles" by locals, the brand has blossomed with over 400 locations across the U.S.

Although not founded in Colorado, Red Robin still ranks on this list as it has been headquartered in Greenwood Village, Colorado, since 2000.

Known as a national brand for casual burgers, dinners and meals to go -- and for their catchy jingle -- consumers have been enjoying Red Robin restaurants since 1969.

Red Robin has over 500 locations across the U.S. and over $1 billion annually in revenue.

This list wouldn't be complete without one of America's most recognizable companies -- Western Union. The financial services company has been around since its founding in New York in 1851, but it has been headquartered in Meridian, Colorado for some time.

Although it got its roots in telegrams, the company has had to change with the times. Telegrams were discontinued in 2006, but Western Union has found legs with money transfers, money orders and other commercial services.

Although these businesses made our top 10 list, there are dozens of other valuable Colorado businesses, including the hundreds of small businesses which call Colorado home.

Here are three honorary mentions which would be included on this list, had they not been bought by larger companies which changed their headquarters.