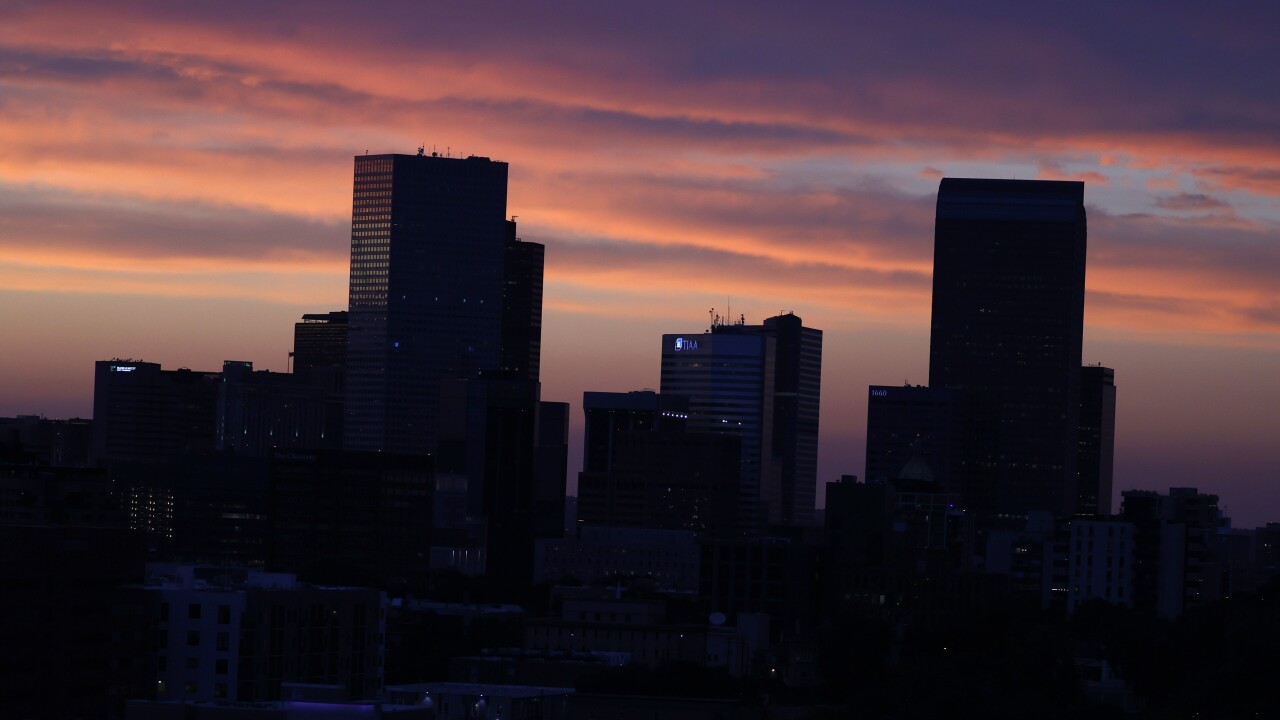 (Copyright 2020 The Associated Press. All rights reserved. This material may not be published, broadcast, rewritten or redistributed.)
David Zalubowski/AP
The skyline is silhouetted against the illuminated sky after the sun set behind the Rocky Mountains late Wednesday, July 15, 2020, in Denver. (AP Photo/David Zalubowski)

DENVER – Fifteen Colorado counties were told last week by the state public health department they needed to submit mitigation plans or lose their existing variances because case rates or positivity rates have exceeded the threshold in each county to have the variances in place.

On Sunday, the Colorado Department of Health and Environment notified the 15 counties that they needed to submit mitigation plans or have their variances revoked because their case incidence rates or positivity rates were above the threshold set by the state in granting the variances from the current phase of COVID-19 response. On Tuesday, CDPHE Executive Director Jill Hunsaker Ryan said that eight counties had not submitted plans, though some have since she made those statements.

“If we can control the spread of disease on a county level, it reduces the need for statewide disruption,” Ryan said at a news conference Tuesday.

While the full state is under the “safer at home and in the vast, great outdoors” phase, many counties have been granted variances over the past couple of months allowing them to open businesses up to larger capacities, or to allow larger gatherings, after demonstrating they have a handle on case counts and positivity rates, have measures in place to limit virus transmission and have tracking, quarantining and contact tracing systems in place.

The letters or verbal notifications went out last week from the CDPHE to counties and notified them either their two-week incidence rates exceeded the 100 people per 100,000 people threshold, or the 5% positivity rate. The counties were told to either submit mitigation plans to the department or to confirm they would be moving back to the safer-at-home phase with no variances.

Douglas County, for instance, had exceeded the incidence rate when the CDPHE sent the letter but had not exceed the positivity rate threshold.

If a county submitted a mitigation plan, it will have two weeks to reverse the trend of virus growth, at which time the CDPHE would re-evaluate case counts and positivity rates in the county and determine whether to again grant the existing variances or leave the county under the safer at home phase.

Currently, any new variance requests are suspended because of increased cases across the state.

The CDPHE said that Lake, Mineral, Sedgwick, Chaffee, Garfield, Prowers, Grand and Pitkin counties either determined that the variances are no longer needed or wanted, as some of the changes from the original “safer-at-home” phase to the “safer at home in the vast, great outdoors” phase increased the cap on indoor and outdoor gatherings.

But the department said that Chaffee, Garfield and Prowers counties had submitted mitigation plans already “in an effort to partner with the state and stop the spread of the virus.”

The state said that counties can start on mitigation plans without being notified by the state they were above their thresholds.

“As soon as they notice that they have passed one of their suppression thresholds they should notify CDPHE and begin implementing their mitigation plan,” the CDPHE said. “Mitigation plans can include strategies such as policies that promote greater social distancing, increased testing and contact tracing, and education campaigns that promote mask wearing and other protective behaviors.”