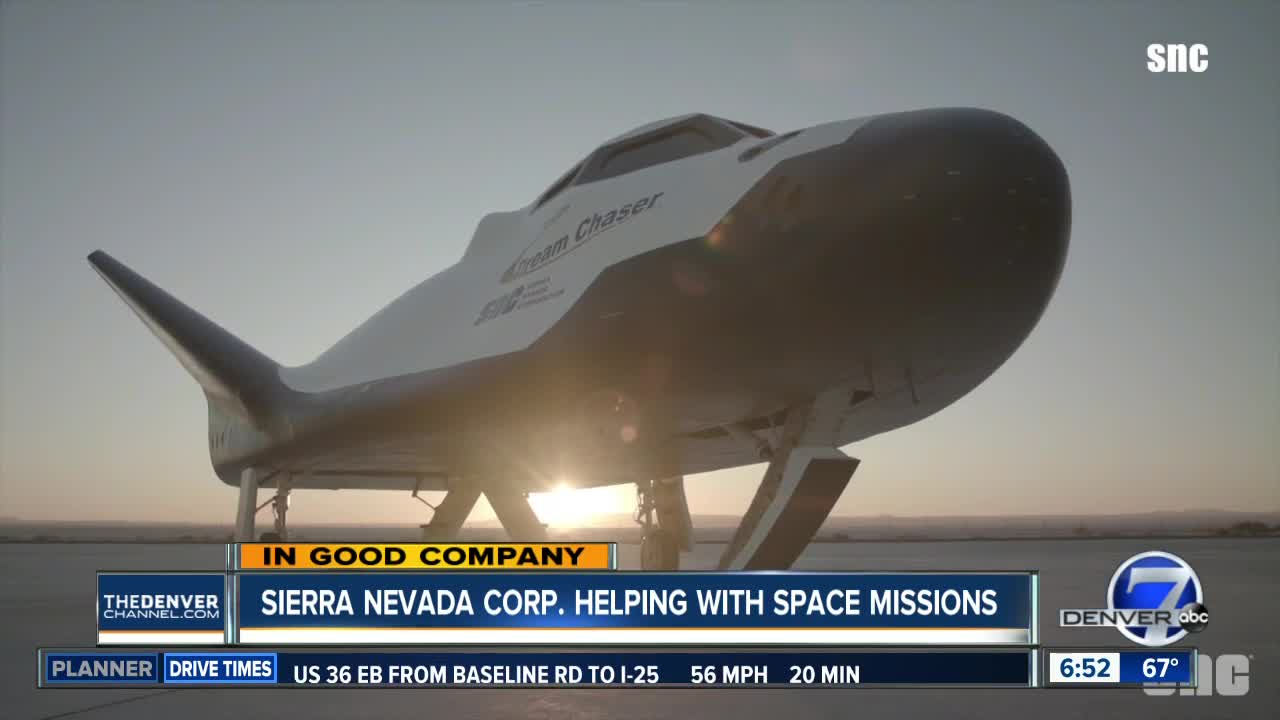 According to the Colorado Space Coalition, Colorado employs 190,290 people in space research and technology jobs. And, the state ranks No. 1 for the number of aerospace employees per capita.

LOUISVILLE, Colo. — Fifty years ago, the crew of Apollo 11 was on its way to the moon. It was a mission that marked a pivotal moment in American history and sparked generations of space exploration.

Today, Colorado is one of the states leading the charge into a new chapter of space travel. According to the Colorado Space Coalition, Colorado employs 190,290 people in space research and technology jobs. And, the state ranks No. 1 for the number of aerospace employees per capita.

One company, Sierra Nevada Corporation, won a prime contract with NASA to fly six missions to space starting in 2021. Their prototype aircraft, lunar habitat and control room are all based in Louisville, Colorado.

Their flagship spacecraft is called the “Dream Chaser.”

“NASA has now moved on to allow different companies — aerospace companies — in the commercial world to start building these vehicles,” said Angie Wise, Sierra Nevada’s director of mission assurance. “And they found that's a lot faster way to get into orbit. And more cost effective.”

Sierra Nevada Corporation (SNC) won a contract with NASA to deliver cargo to the International Space Station, and the Dream Chaser’s winged design will allow it to re-enter the atmosphere and land on a runway.

Spacecrafts from SpaceX, Orion and other similar companies land in the ocean.

“We have a way to bring all the science that the crew members are focusing on while they're living up there, and we can bring it back to a runway in a really gentle landing,” Wise said. “So, we're not disrupting the science as much and we're learning much more about the space environment.”

The ultimate goal is to inhabit space, and sustain life. Kevin Clinton is SNC’s Program Director for the Dream Chaser 2 project and said he was inspired by NASA’s shuttle missions.

“And now, we're getting into a much more exciting regime of exploring the solar system,” he said. “We can push people elsewhere into space to live on the moon, to live on Mars, and I think that's what you're seeing.”

Earlier this year, the team at SNC successfully landed the Dream Chaser in the Mohave Desert through an automated flight without pilots.

Now, they're configuring their Lunar Gateway, an inflatable hub that would house astronauts and orbit the moon.

“Our team here at Sierra Nevada is helping them grow vegetables in space right now,” Wise said. “So, how you can you start making your own food instead of having to bring food up with you?”

It’s part of a collaborative effort by several Colorado companies to exist in ways we only imagined 50 years ago.

Modern technology now makes it possible to live in space, but the call to action has always been the Apollo 11 mission.

“I think everyone in the industry hears that calling,” Clinton said. “We're all pointed in the same direction trying to make it happen for our country and for the species.”

Sierra Nevada Corporation will continue their test flight operations for the Dream Chaser ahead of their first scheduled launch in 2021.