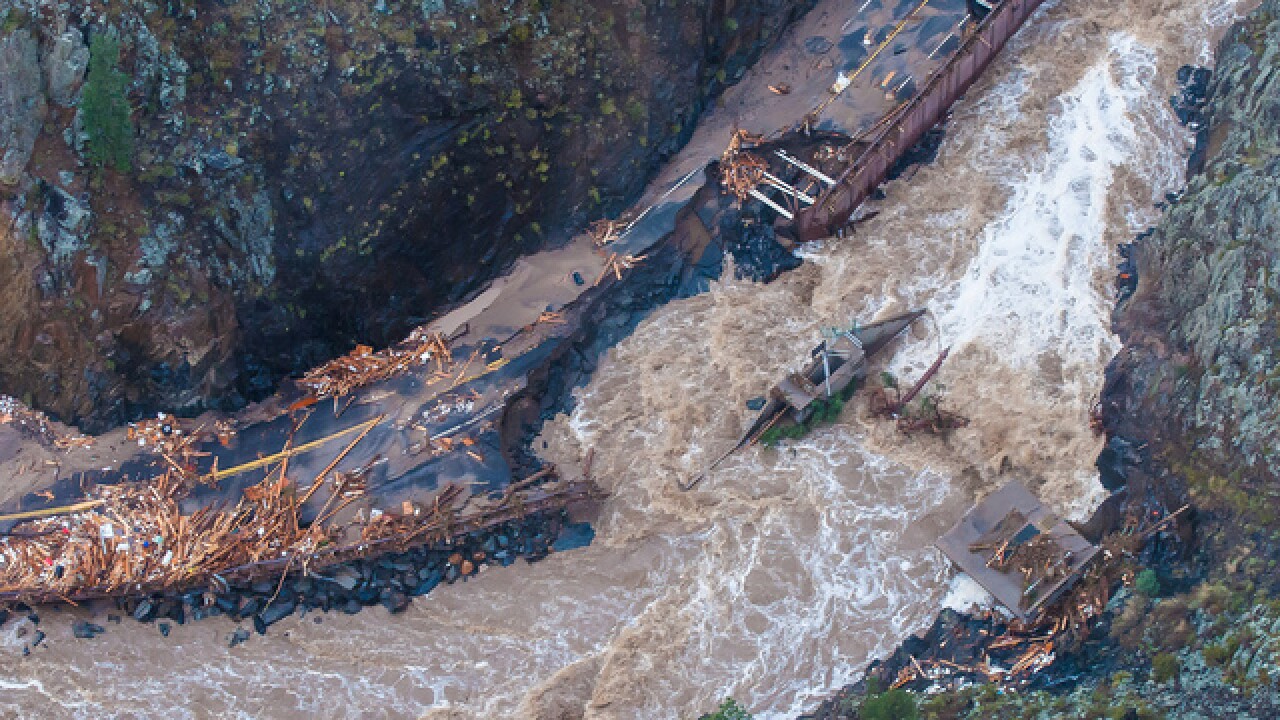 Five years after the 2013 floods killed several people , swept away neighborhoods and damaged or wiped out hundreds of miles of state highways and bridges, repairs on our roadways are nearing completion.

That 2013 storm created mudslides, rockslides, landslides and washouts and left damage in 24 counties across Colorado.

Almost 40 major interstate and highway roadway segments, plus local agency roads, were temporarily closed, according to the state's flood website . All of the impacted interstates and highways reopened, with temporary repairs, by Dec. 1, 2013. However, permanent repairs are still underway.

We checked in with three of the hardest hit counties to ask what transportation repairs are left.

This week, Boulder County is starting on one of the largest remaining repair projects, according to Andrew Barth, the Boulder County Transportation Communications Specialist.

Crews will be working on two sections of lower Fourmile Canyon Drive. The first section starts about a mile from Highway 119, and extends to Poorman Road. The second section is further north, between Logan Mill Road and the Salina Junction. Learn more here .

There are three other projects on Four Mile Canyon Road that are still active.

Crews will start paving one of them, the upper section of Four Mile Canyon Road, on Tuesday.

"Still need to do more work up there," Barth said.

A bridge that was washed out in 2012 on Logan Mill Road has been rebuilt, and crews are finishing up a few things, he said. Paving there is scheduled for Sept. 19.

Other projects are also underway.

Repairs in James Canyon are in the final stretch, Barth said.

"It's now in its permanent alignment, it will be a lot more resilient," he said.

There's also another few months of work on Wagonwheel Gap Road. Crews are finishing the paving there. Then, they have work to on signs, striping and vegetation.

In early 2019, they will work on Sugarloaf Road up in Boulder Canyon, Barth said. Crews will be building new walls to shore that road up.

In Larimer County, the 2013 floods washed away 25 to 30 miles of roadway and damaged or destroyed 65 bridges, according to Road and Bridge Director Todd Juergens.

Juergens said more than 2,000 properties were without access immediately following the flood.

Damage was estimated at $106 million.

Despite that long list, only three projects are yet to be completed.

Juergens said the bridges are under construction, but are not complete.

While U.S. 34 in Big Thompson Canyon was a CDOT project, and not a Larimer County project, it finally reopened this summer after several long closures for repair work. Read more here .

Weld County had more than 654 miles of roads impacted by the 2013 floods.

"At one point, every north/south road from I-25 to east of Kersey was closed in Weld County due to the flooding," said Weld County Communications Director Jennifer Finch.

Finch said that the floods happened during harvest season, so the county worked hard to get the north/south routes reopened with temporary repairs as quickly possible so farmers could get their produce where it needed to go.

"The CR 53 bridge is a very big project, that probably won’t finish until the beginning of next year," she said.

The CR 87 project could be done next month.

Relford said nearing completion is very exciting for those who have been involved in the repairs since the beginning.