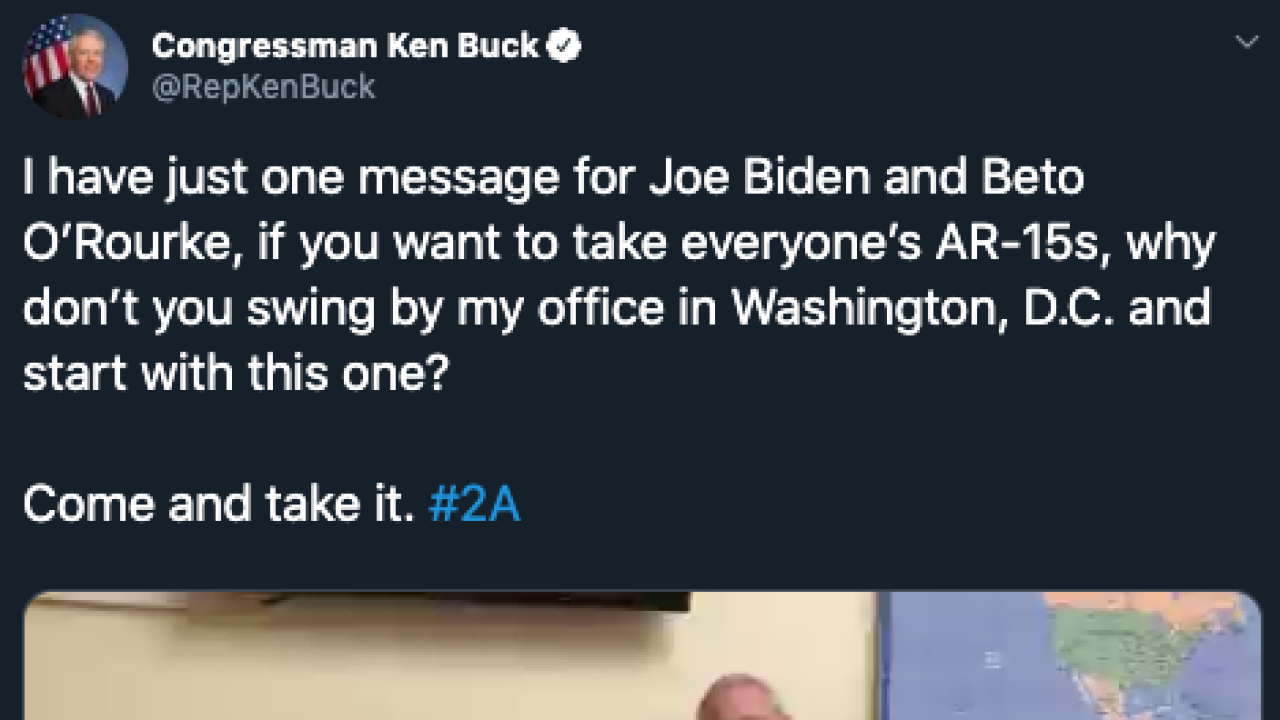 WASHINGTON, D.C. — In the wake of a viral tweet from a Denver councilwoman last week, Colorado Congressman Ken Buck drew attention from both sides of the aisle Friday morning with a controversial tweet and video where he's seen holding a AR-15 and dares Joe Biden and Beto O'Rourke to take it from his office.

"I have just one message for Joe Biden and Beto O’Rourke: If you want to take everyone’s AR-15s in America, why don’t you swing by my office in Washington, D.C. and start with this one? Come and take it," he says in the tweet's video, as he takes the gun off its display on the wall and holds it.

The Republican from Windsor represents Colorado's 4th Congressional District. He's been a strong supporter for the Second Amendment.

According to a press release sent out later in the morning about the tweet, Buck's office said the video is a response to O'Rourke's comment from September 2019 about taking away Americans' AR-15s and AK-47s, and Biden's announcement on Tuesday that he'd put O'Rourke in charge of his gun control efforts should he be elected president. In the release, Buck said he will continue to stand up to any attacks on law-abiding gun owners in his district.

The release read that Buck had permission from U.S. Capitol Police to display the gun, which has an American flag skin on it, in his office. It is unloaded and locked, according to his office.

Responses to the tweet varied from a concerned Twitter user who wrote, "Honestly, it sounds like @RepKenBuck is making a threat of bodily harm to a current coworker and a former Vice President (and possible future President). Shouldn't this be investigated?" to supporters who wrote, "That’s why I continue to vote for you Congressman Buck. You stand up for our constitutional rights."

On March 10, Representative Tom Sullivan posted a retort tweet aimed at Buck and Senator Cory Gardner showing the large white cross for his son that was placed outside the Aurora movie theatre after his son, Alex Sullivan, and 11 others were murdered. He keeps it in his office. He also showed a picture of the gun used in the crime.

On Feb. 28, Denver City Councilwoman Candi CdeBaca quoted a tweet — sarcastically, she later said — from another Twitter user that said if they got COVID-19, they'd go to a MAGA rally. This tweet drew similar criticisms as Buck's tweet Friday regarding what's a true threat and what's a sarcastic remark or joke.