CDOT, private company working to figure out why US 36 collapsed, next steps in rebuild 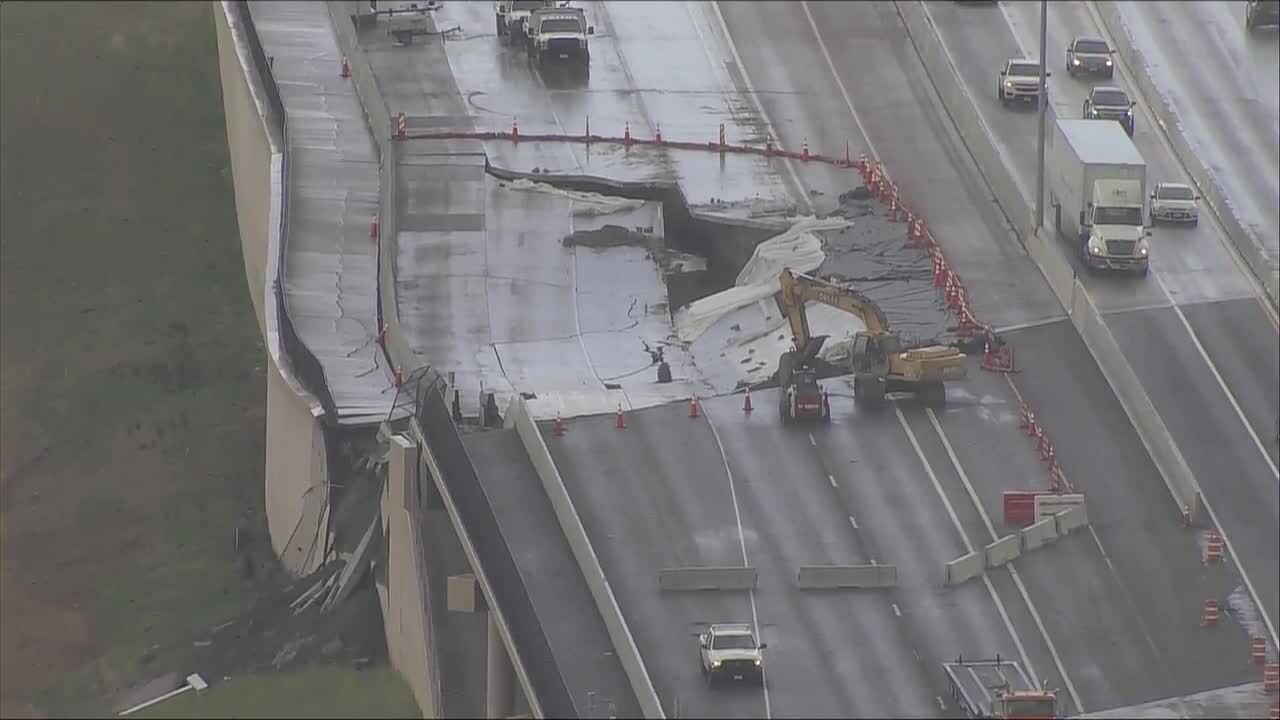 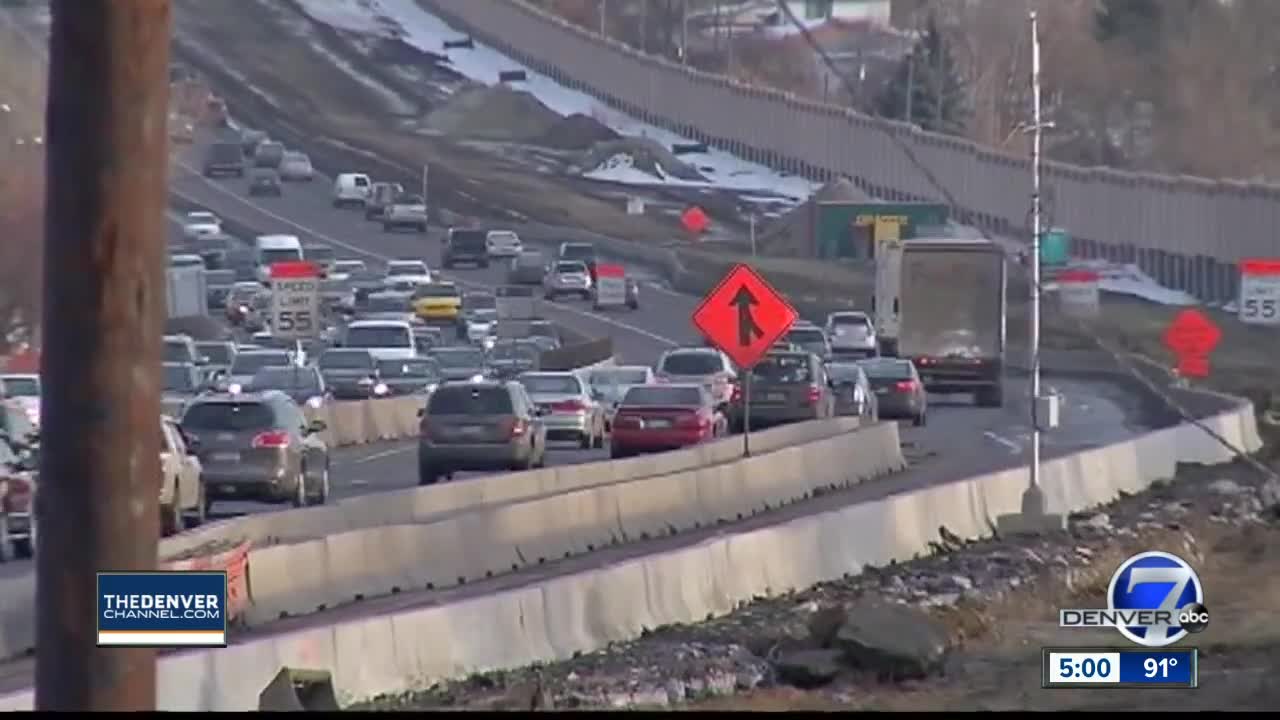 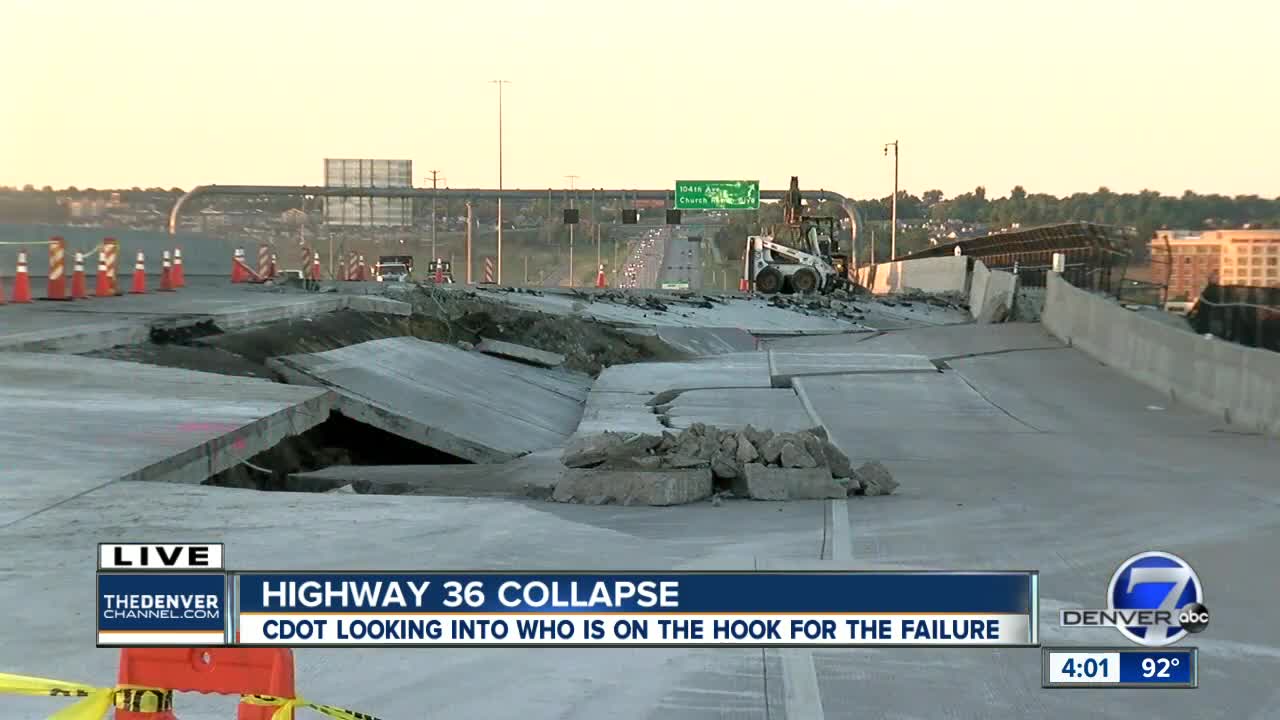 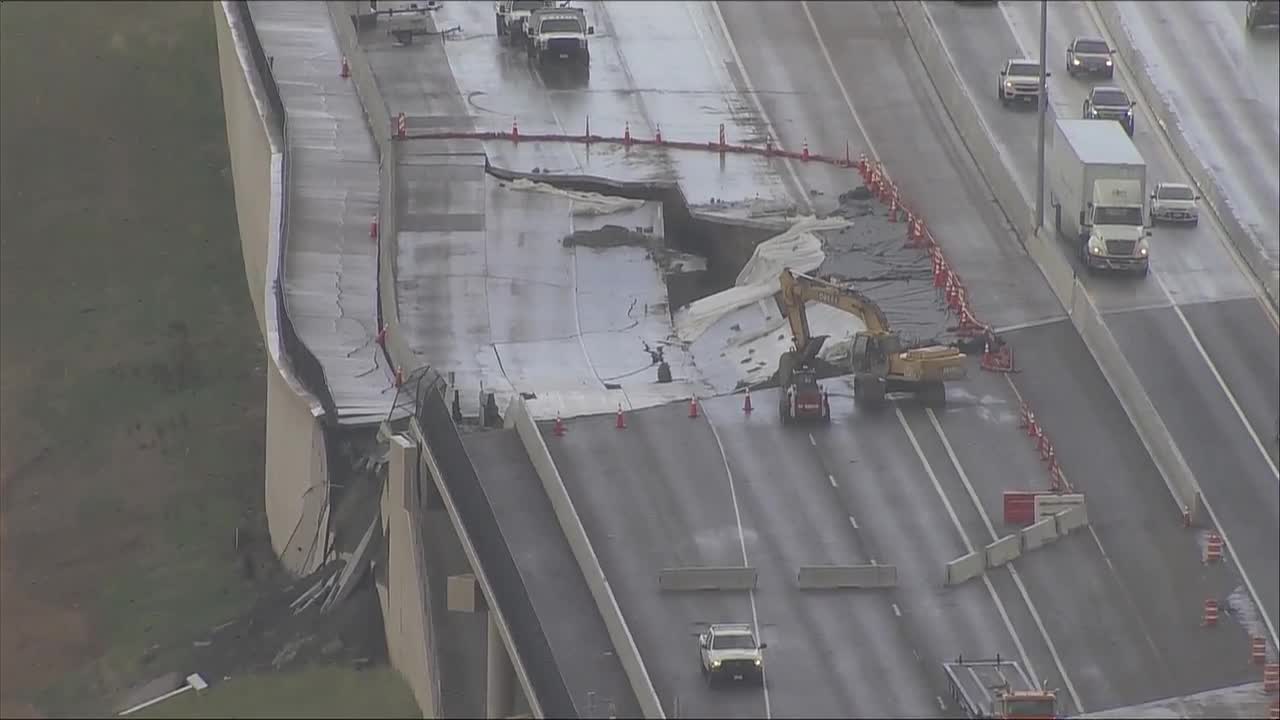 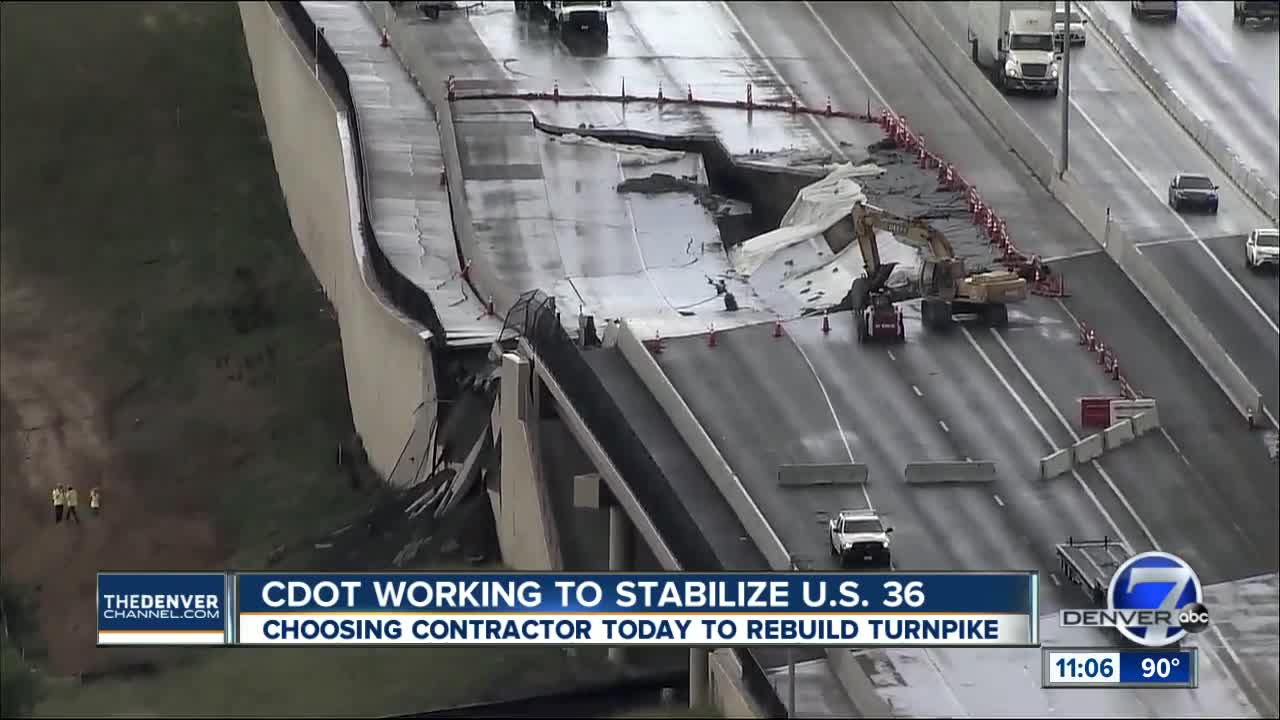 WESTMINSTER, Colo. – The eastbound lanes of U.S. Highway 36 continued to collapse Tuesday near its intersection with Church Ranch Blvd. and as the Colorado Department of Transportation and the private company that maintains the highway said they were working to figure out why it happened, along with the next steps.

CDOT crews opened two lanes typically used for westbound traffic to let eastbound drivers through Tuesday morning after working around the clock for the past four days.

Crews first noticed cracking in the road last Monday and closed the eastbound lanes on Friday morning as they expanded. But they continued to expand over the weekend and by Monday, the hole in the road had expanded to be more than 300 feet long and 60 feet wide and was sinking an inch each hour.

Aerial footage of the bridge taken Tuesday afternoon showed the road continues to collapse. If you want to avoid the whole area, here are some alternative routes.

CDOT said Tuesday morning that the westbound lanes and bridge “are safe and in good condition” and said the damage was isolated to that lone stretch of eastbound U.S. 36.

Denver7 spoke with CDOT and Plenary, the company hired for Phase 2 of the U.S. 36 project who is now tasked with maintaining the entire highway, even though it was not involved in the construction of the stretch of the highway that has collapsed, which was done during Phase 1.

Ames Construction and Granite Construction were in charge of the design-build aspect of both phases, and Plenary provided the funding and received a 50-year agreement to perform both routine and lifecycle maintenance on the entire stretch of the highway from Denver northwest to Boulder.

Neither Ames nor Granite responded to requests for comment on Tuesday.

A spokesperson for the company said Tuesday it was working with CDOT and the High Performance Transportation Enterprise (HPTE) to figure out what happened and the safest and most efficient way to get traffic moving and to permanently repair the road.

“We are all too aware of the inconvenience this is causing commuters, and our complete focus at this time is on getting the roadway open – safely and quickly,” said Gil Rudawsky with GroundFloor Media, which is handling communications for Plenary for this incident.

CDOT officials declined formal interviews on Tuesday and said they were in meetings about the highway. It said the HPTE would lead the forensic and financial analysis of the bridge’s collapse.

“Independent experts will be hired to perform engineering analysis, financial analysis and provide reports that identify the cause(s) of the failure along with associated responsibility and impacts,” said Matt Inzeo, the special advisor to the executive direction and public information officer for CDOT. “Concurrently, CDOT will maintain their focus on the safety of the public, repair, temporary traffic control and restoration of normal operations on the corridor as quickly as possible.”

The private-public contract allows for Plenary to recoup lost toll revenue if the toll lanes are out of service, but Rudawsky said the company’s focus was getting the road fixed. Rudawsky said, “No decisions about this are being discussed at this time.”

CDOT and private officials are now working to figure out what caused the collapse and how to ensure it doesn’t happen again, they said Tuesday.

CDOT Chief Engineer Josh Laipply over the weekend described the problem as a "pretty large slope failure," in which the soil beneath the road settled and shifted and caused the highway to buckle. He said that crews tried to stabilize the soil over the weekend, but it continued to shift and settle.

An environmental impact study from CDOT completed prior to the project getting underway noted that there were some geologic hazards, including collapsing soil and dipping bedrock, that inspectors found could cause trouble in the future.

The report found collapsing and corrosive soils in the Westminster segment of the project and along much of the entire stretch from Denver to Boulder.

“Expansive soils and bedrock and corrosive soils may cause damage to transportation system components over a period of years. Steeply dipping bedrock has locally demonstrated severe damage to pavement and transportation structures from differential movement. Collapsible soils can damage the system infrastructure by either large settlement areas of differential settlement,” the report noted. It suggested designing a deep foundation system to keep those things from affecting the roadway.

But the report also noted that “[t]here is no clear distinction between direct impacts to geology, geologic hazards, soils, or mineral resources associated with the US 36 corridor under any of the proposed build packages.”

Danny Katz, of the Colorado Public Interest Research Group, analyzed the private-public contract when it was agreed upon and said while many people had initial concerns about the agreement when it happened, that he thought the agreement made sense in order for the state to complete the stretch of highway. He also said he didn’t think the state would end up having to pay Plenary any lost toll money because of the public safety hazard.

“I think there’s some clear language in there that allows law enforcement to come in and say, ‘Hey, this road is clearly unsafe. We’re not going to be sending cars over it; we need to shut this road down,” Katz said. “But I think the clause is pretty clear that if you have law enforcement involved and it’s a safety issue, they’re saying we need this road closed down, then we should not be on the hook for this lost toll revenue.”

Gov. Jared Polis responded to a question from reporters about the next steps at a Tuesday news conference, saying the state planned to hold people accountable.

“Certainly, we have indicated to CDOT, and it’s certainly the Department of Transportation’s approach, that they will do their best to hold parties accountable and to make sure that taxpayers are made whole to the extent possible, and that people are accountable for their work,” he said.

During a tour of the damaged area, Polis also thanked crews working to repair the highway and for making "a big difference" for so many people who drive the highway.

"Thank you all for your extra work because that reacting and going in, just made an enormous difference for so many people who travel up and down, and having two lanes each way is about as close to normal as we can get while they do the heavy work."

CDOT said late Tuesday afternoon that it will close both directions of the highway at Church Ranch Blvd. to Wadsworth Blvd. from approximately midnight to 3 a.m. overnight into Wednesday in order to move a fiber optic cable. A detour will be in place for those hours.