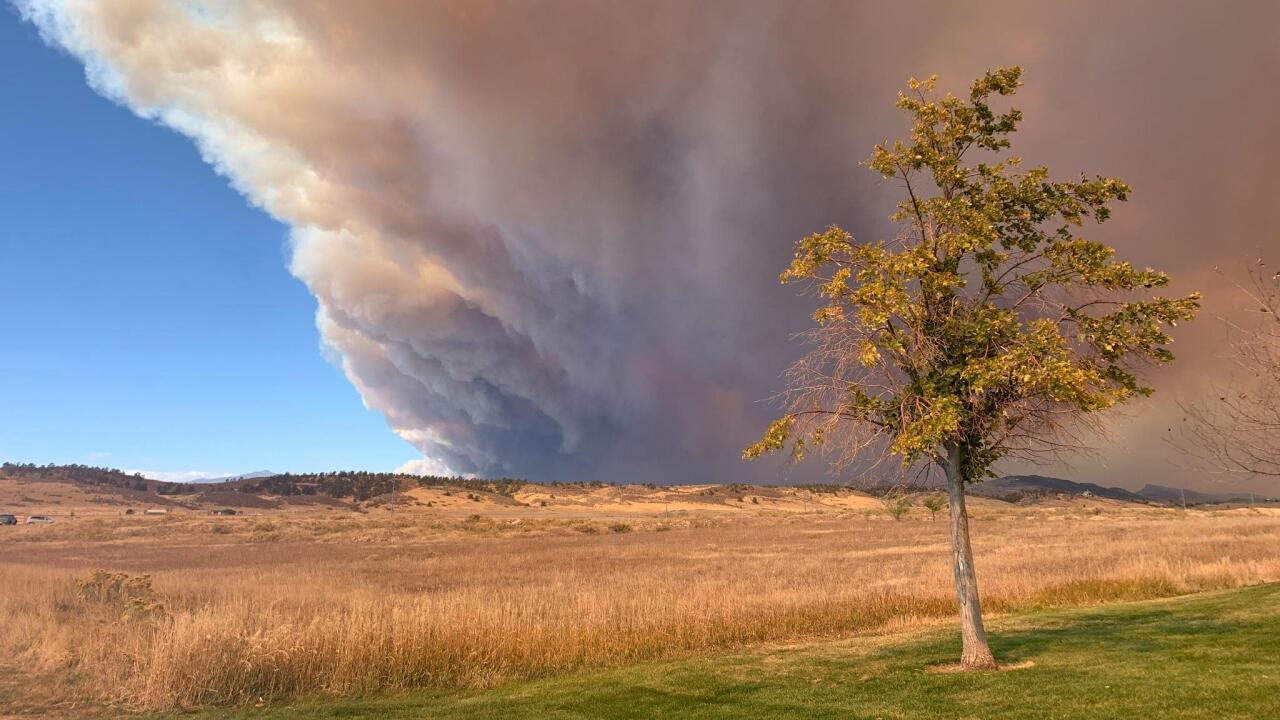 Maggie Merrill Brown / Our CO | Through your photos
A giant smoke plume from the Cameron Peak Fire can be seen from the west side of Loveland on Wednesday, October 14, 2020.

FORT COLLINS, Colo. – The Cameron Peak Fire, which has burned west of Fort Collins for a little more than two months, has become the largest wildfire in Colorado history, fire officials said during a virtual community meeting Wednesday evening.

The fire, which started on Aug. 13 at approximately 1:48 p.m. 15 miles southwest of Red Feather Lakes, flared up overnight after 60 mph gusts were reported in the fire area, prompting new mandatory evacuations throughout the day. It grew to 164,140 acres in size by Thursday morning.

"It was a bad day," said Larimer County Sheriff Justin Smith during the virtual community meeting, "but it very easily could have been a lot worse."

Smith, who wrote in a Facebook post later in the evening that it was "absolutely heartbreaking" to see homes go up in flames because of the fire, said during the virtual briefing no lives were lost and there were no reported injuries.

Watch the full briefing in the video below:

On Wednesday, those sustained winds between 40-60 mph pushed the fire east and south, fire officials said, but officials were mostly successful in keeping the fire south of the Buckhorn 44H Road. Their main focus Wednesday night was structure protection for the next 48 hours in the Retreat, Glen Haven, and Storm Mountain Cedar Park areas.

Voluntary evacuations were also ordered for people in the area of Highway 34 from Drake to just west of the Dam Store. The highway was shut down in both directions between Loveland and Estes Park to help with evacuations.

An American Red Cross evacuation center has been opened at the Embassy Suites in Loveland, located at 4705 Clydesdale Parkway. The Red Cross has also set up a new phone line (800-417-0495) for evacuees to call for information. Those affected can also go to the Hilton Garden Inn at 821 E. Harmony Rd. in Fort Collins, where volunteers will assist whoever is in need.

Cass Cairns, the public information officer for the fire, said Wednesday afternoon that winds were gusting up to 60 to 70 miles per hour on Wednesday, making for a challenging day for firefighters. Cairns said the fire had crossed Pingree Park Road on Wednesday, but it was unclear how far it had moved.

The fire had burned into the burn scar from the 2012 High Park Fire over Labor Day weekend and was again burning in the same area Wednesday.

Cairns said the high winds were creating spotting on the fire Wednesday and that firefighters were keeping a close eye on whether they should disengage because of danger.

The Cameron Peak Fire, which was the third-largest in Colorado history before nightfall Wednesday, remains 56% contained.

The state's 10 largest wildfires in history, ranked by acreage, are: