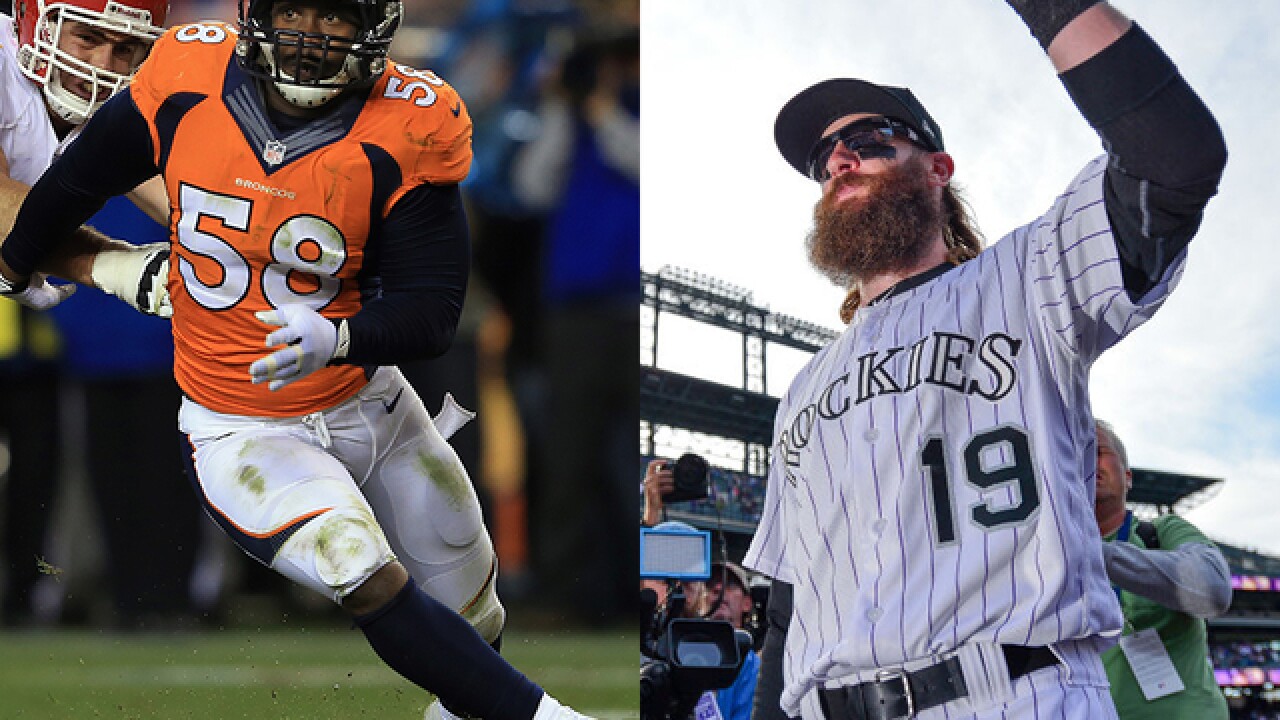 Getty Images
<p>Monday is one of the biggest days in recent memory for Denver sports teams and their fans, as the Rockies have a chance to win their first-ever NL West championship and the Broncos host the Chiefs on Monday Night Football. (Photos: Getty Images)</p>

DENVER – Monday is one of the biggest days in recent memory for Denver sports teams and their fans, as the Rockies have a chance to win their first-ever NL West championship and the Broncos host the Chiefs on Monday Night Football.

After the Rockies' 12-0 drubbing of the Washington Nationals Sunday, they have a one-game playoff in Los Angeles with the Dodgers Monday to see who will win the division and who will go play a Wild Card game in the Midwest on Tuesday.

The Rockies and Dodgers are tied atop the NL West with identical 91-71 records and will win the division with a victory Monday.

Outfielder David Dahl was named the National League Player of the Week on Monday after hitting .333 with six home runs, 15 RBI and eight runs scored over seven games last week. His performance kept the Rockies in the chase for a playoff berth.

The first pitch Monday is slated for 2 p.m. MT. The game will be broadcast on ESPN. The Rockies will start German Marquez (14-10, 3.76 ERA) and the Dodgers plan to start Walker Buehler (7-5, 2.76 ERA) on the mound for the final regular-season game for the two teams.

The loser of the game will play the loser of the Milwaukee Brewers – Chicago Cubs game, which is being played in Chicago ahead of the Rockies game, in a Tuesday Wild Card game.

If the Rockies win Monday, they would host games 1 and 2 of the NLDS starting Thursday.

The Chiefs and undefeated and quarterback Patrick Mahomes set a new NFL record for the number of touchdown passes thrown in the first three games of a season.

A Broncos win would keep the team into a first-place division tie with the Chiefs heading into the second quarter of the season, though a loss could spell trouble for the Broncos, who would sit at 2-2 if they lose.

The Broncos game will be televised on ESPN and locally on Channel 20. Kickoff is scheduled for 6:15 p.m. MT.