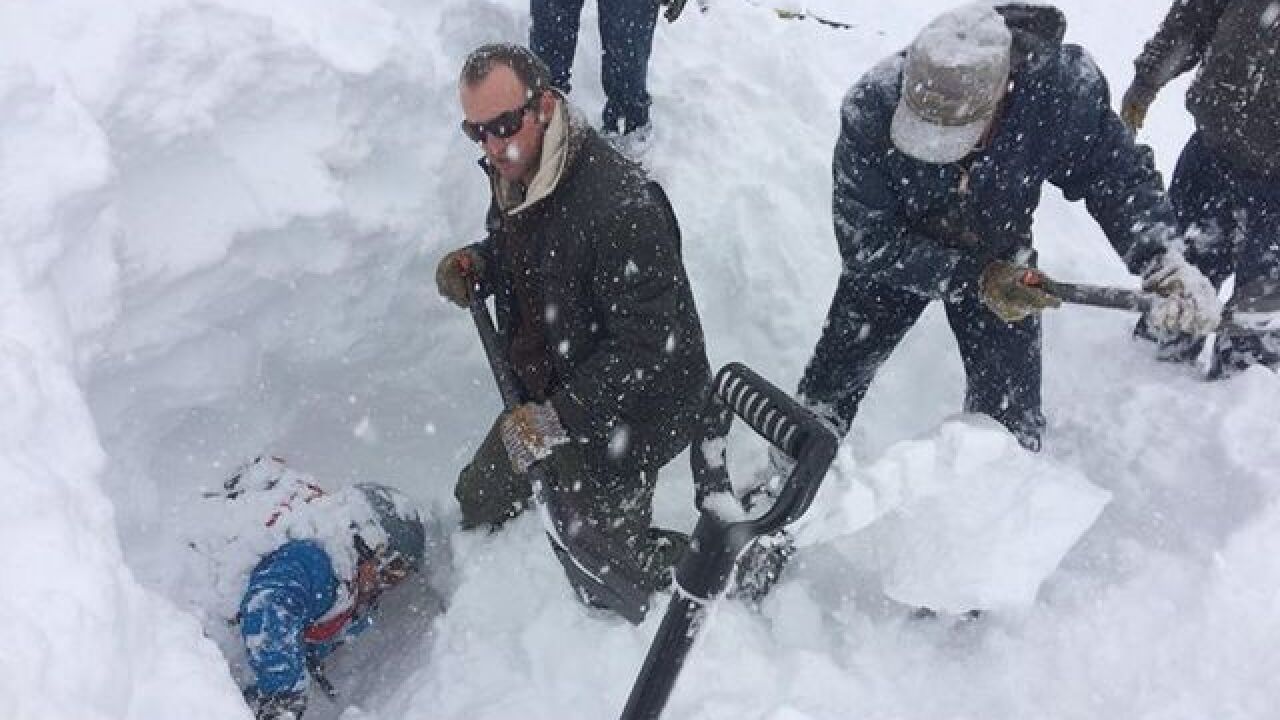 Sallie Barney
<p>The skier's rescue was captured by people who came upon the avalanche Monday.</p>

SAN JUAN COUNTY, Colo. – A backcountry skier was rescued by his ski partner and a happenchance encounter with a Silverton avalanche professional after an avalanche dumped him off a cliff and onto U.S. 550 below, trapping him under several feet of snow.

The man and a friend had been backcountry skiing and were trying to get back to U.S. 550 when the weather deteriorated. One of the skiers got too close to the edge of a cliff and triggered an avalanche that pulled him off the edge.

The skier went down a 25-foot cliff with the slide, which ended on top of the highway.

The skier was buried under at least four feet of packed snow, according to Jim Donovan, the director of the Silverton Avalanche School and San Juan County Emergency Manager.

His companion jumped down a 15-foot cliff and used a beacon locator to find his buried friend, whose transceiver had been activated.

As the friend was digging the skier out, Mike Barney, an avalanche professional based in Silverton who is also a heli-ski guide in Alaska, South America and Iceland and is also on the Board of Directors for the Silverton Avalanche School, happened to come upon the avalanche as he and his wife headed back to Silverton from Durango.

Barney had avalanche gear with him, and helped the skier’s friend and another person who happened upon the avalanche dig the trapped skier out.

“It was a big relief, because when I showed up, I added up the minutes of how long this guy had possibly been under the snow,” Barney told Denver7. “And when I was able to clear his airway with my hand and I asked if he could breathe and he said, ‘Yes,’ in a clear voice, I was relieved.”

Donovan said the trapped skier had an Avalung device on him that he was using to breathe. The device is used by backcountry skiers and snowboarders to breathe in the event they are trapped in an avalanche, and likely helped save the man’s life.

“Everything went really well – just that he ended up on the highway and there were other people to help was a plus for them,” Barney said. “He had an Avalung, which remained in his mouth. His partner did a great search and we had multiple shovelers.”

Donovan said the skier suffered no injuries in the slide.

Several avalanches have been reported in the area in the past week after feet of snow fell in waves along U.S. 550. The area is also one of the most popular backcountry skiing destinations in Colorado.

Avalanche dangers remains “considerable” in the northern and southern San Juan regions through Friday at the earliest.