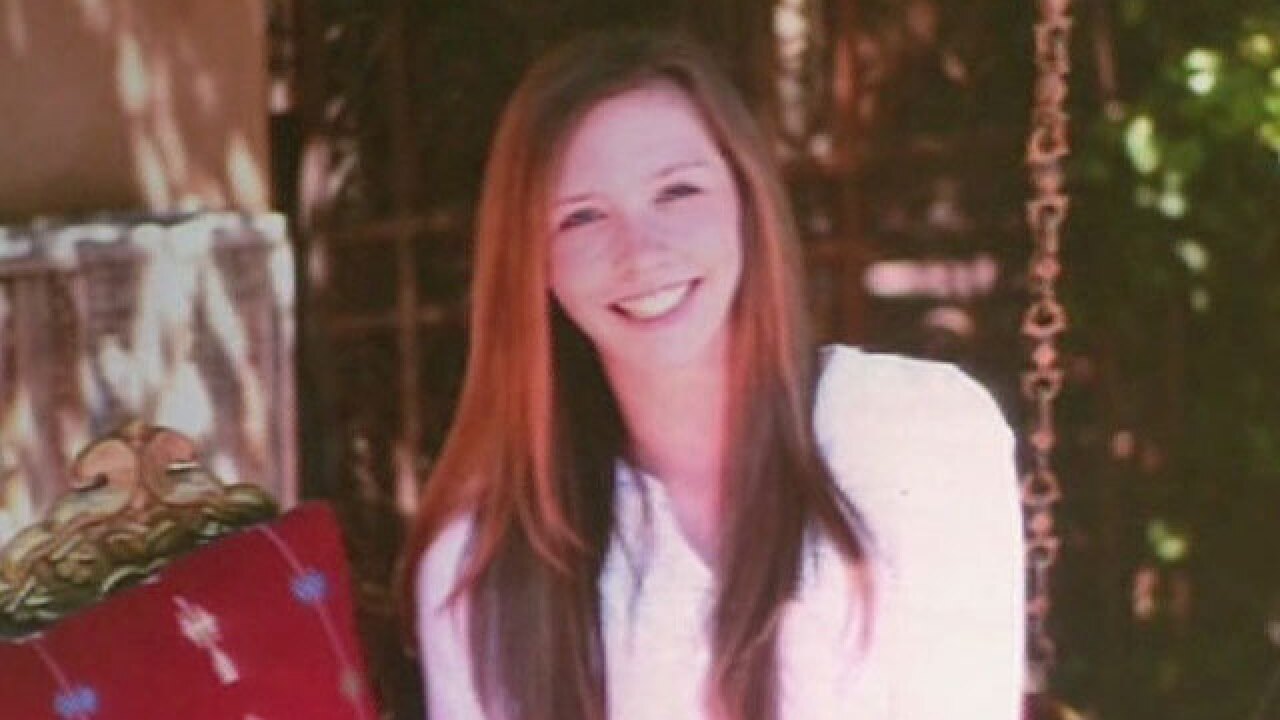 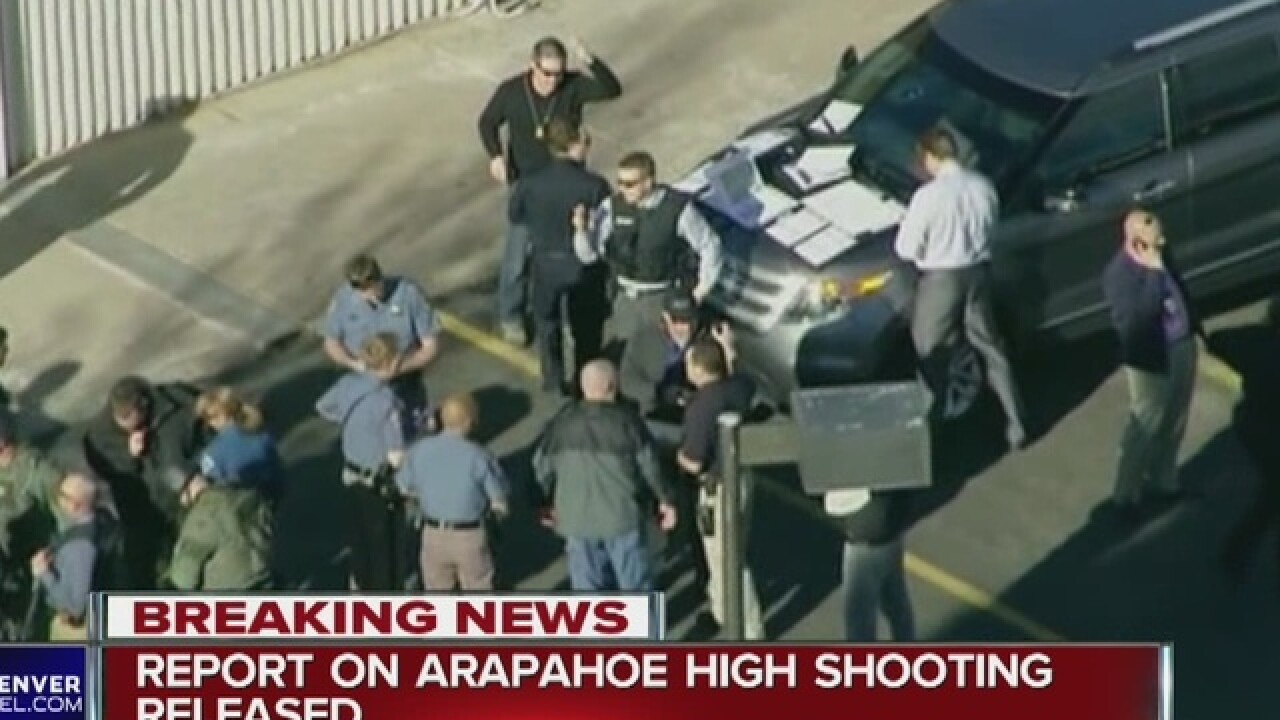 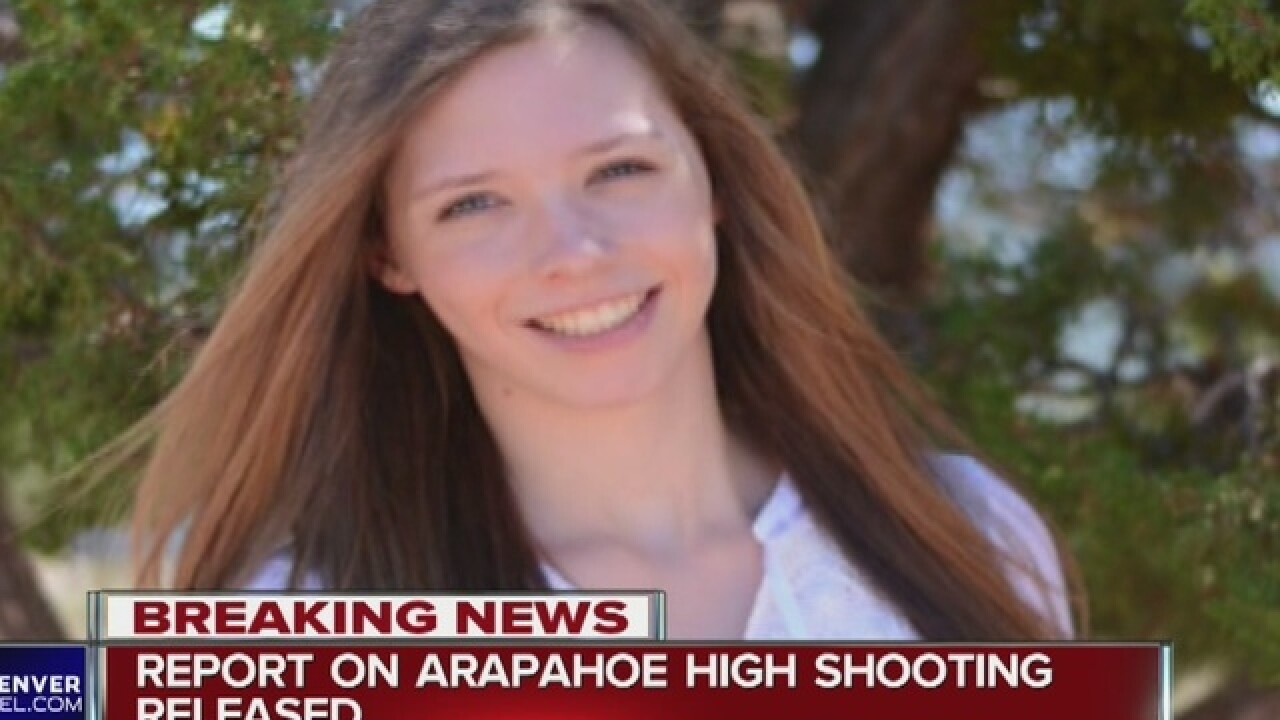 Investigators who looked into the deadly shooting at Arapahoe High School say "many small errors" were made and there were "many missed opportunities" to intervene with the gunman prior to the shooting.

The report released Monday was done by The University of Colorado Center for the Study and Prevention of Violence and the University of Northern Colorado's Department of Criminal Justice. It was commissioned by the Arapahoe High School Community Fund Honoring Claire Davis, a donor advised fund of The Denver Foundation.  The purpose was to understand the school’s threat and risk assessment procedures and responses.

Senior Karl Pierson shot and killed fellow student Claire Davis on Dec. 13, 2013, and then killed himself.

The report’s findings revealed three major failures within AHS and Littleton Public Schools in the months and years leading up to the shooting:

According to the report, there were "many missed opportunities" to share information about the gunman's "concerning behaviors" and to intervene with the gunman before the shooting.

"If just one student or teacher, had called Safe2Tell, this tragedy might have been averted," said the report, referring to a tip line for reporting possible threats.

Authorities believe the gunman was targeting his debate coach when he entered the school with a shotgun, machete, homemade bombs and 125 rounds of ammunition. Investigators said he shot and killed Davis, 17, before turning the gun on himself in the school library as security officers closed in. The coach escaped unharmed.

Two school security guards told investigators they saw the gunman looking at pictures of guns and mass shootings on his computer six weeks before the shooting. Also, police found a book about the Columbine High School attack when they searched his mother's home.

Arapahoe County Sheriff Dave Walcher said school officials did not suspend the gunman in September and allowed him to return to class after he threatened to kill the debate coach, who had recently demoted him as captain of the team.

“We don’t want to be overly critical of Arapahoe High School,” Woodward said, “but yes, their own policies and procedures were not followed in terms of how you complete a threat assessment.”

He also said the myriad of small issues with “systems thinking” ended up “putting Karl Pierson in a position where he could commit the crime he committed.”

The report listed a series of errors the school and the school district made involving the gunman (referred to as "KP"):

The victim's parents wrote about the lack of intervention in an introduction to the report.

"The angry young man that murdered our daughter was a student in crisis who desperately needed guidance in a different direction from the one he pursued," wrote Michael and Desiree Davis. "The lesson to learn is not that our schools should be less tolerant and more punitive, rather that our schools are now, as never before, in a unique position to identify and secure help for troubled students."

The report quotes AHS Assistant Principal Darrell Meredith as saying, "We all carry some guilt" for the deadly shooting.

The report states that improvements have been made but more needs to be done to ensure student safety.

The report also makes several recommendations, among them:

"Counselors, psychologists and administrators should follow up regularly on how anger management is coming along, therapy, classes and academic progress," Goodrum said. "So that you don't just threat assess the student and then send them on their way, but instead, you build a support plan around that student to get them through the crisis."

LPS Superintendent Brian Ewert said he agrees with this report that warning signs were missed.

“My initial reaction to the findings is that there were warning signs,” he said in an emailed statement, “each in isolation and to some degree disconnected. The challenge was connecting the many isolated incidents into a significant threat.  The district and school failed to connect the dots.

Ewert said “LPS will own and learn from the missed opportunities we had to disrupt Karl Pierson's path to violence with effective interventions and countermeasures.  This will come from a much improved "systems-thinking" approach to information sharing, communication, and training, that includes district personnel, school personnel, law enforcement, external mental health professionals and agencies, and parents.”

Ewert said the district’s schools are safer now than they were two years ago.  He also said the Board of Education and administrators will be relentless in their pursuit of continuous improvement in the areas of safety and security…”

The Superintendent said there will be a special Board of Education meeting on Thursday at 4 p.m. with a press conference that will follow.