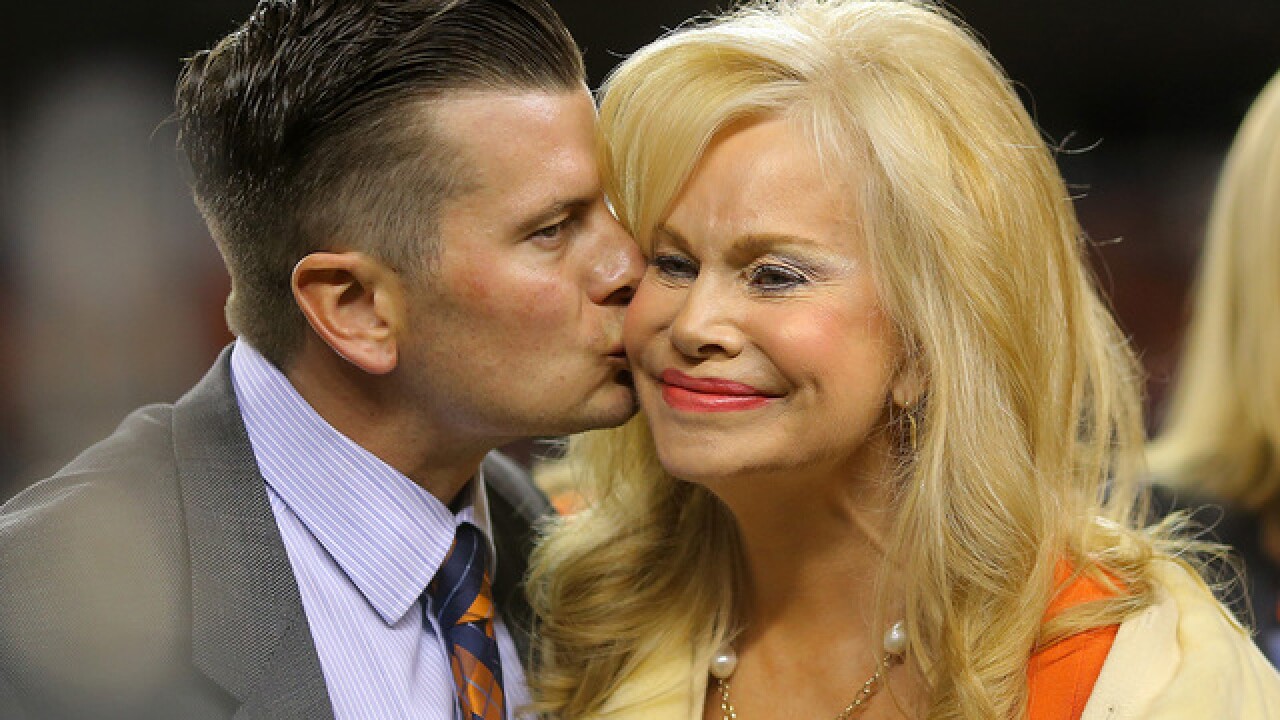 Image copyright 2018 Getty Images. All rights reserved. This material may not be published, broadcast, rewritten, or redistributed.
Justin Edmonds
<p>DENVER, CO - NOVEMBER 01: Annabel Bowlen, wife of Denver Broncos owner Pat Bowlen, is kissed by their son John as the two celebrate Pat Bowlen's induction as the 28th member of Denver Broncos' Ring of Fame during the game against the Green Bay Packers at Sports Authority Field at Mile High on November 1, 2015 in Denver, Colorado. (Photo by Justin Edmonds/Getty Images)</p>

DENVER – Annabel Bowlen, the wife of Denver Broncos owner Pat Bowlen, announced Wednesday that she, too, has been diagnosed with Alzheimer’s disease.

The announcement comes just four years after Pat Bowlen announced his own battle with the disease.

Annabel Bowlen released a statement through the Broncos saying that she decided to make her diagnosis public in an effort to help others who are fighting the disease:

"I recently learned that I've joined my husband Pat and the millions of others who have been diagnosed with Alzheimer's disease.

Since Pat's diagnosis, I have gained a vivid understanding of this disease’s progression and its effect on those living with it as well as their families. My family and I have been — and will remain — dedicated supporters of Alzheimer's awareness, treatment and research funding.

I decided to make my diagnosis public right away in the hope that it continues to raise awareness for those battling Alzheimer's and their loved ones. With June also being Alzheimer's & Brain Awareness Month, the timing was right for me to share this personal update with everyone.

I feel that it is important for people to know that those in my situation do not need to completely withdraw from their daily activities. Based on my own experience with Pat, there will still be many joyous and rewarding moments for me as well as my family and friends.

I intend to proceed in life with the same strength, courage and endurance that Pat has shown in his battle with this disease. Like Pat, I know there will be good days and bad days ahead. I'm grateful to have the support of my family and especially my children — Patrick, Johnny, Brittany, Annabel and Christianna.

It's my hope to remain involved in various Alzheimer's events as my health allows. And of course, I'll be cheering on our Broncos.

Most importantly, thank you to all of our incredible fans for the compassion and support you've given to me, Pat and our entire family."

"All of us at the Broncos are behind Annabel and know she'll face this challenge with courage and determination,” Ellis said. “Our support extends not only to Annabel and Pat, but also to their children. While having both parents diagnosed with Alzheimer's is daunting, they’ve already demonstrated such strength and compassion in their roles as caregivers. We commend Annabel for her brave public announcement and look forward to increasing our involvement in the Alzheimer’s community.”

The team said Bowlen’s announcement will not affect the team’s operations or Pat Bowlen’s plan for succession.

Since 2014, the Bowlens and the Broncos have raised more than $500,000 for the Alzheimer’s Association Colorado Chapter, the team said.