"I am not crazy. I am just a religious zealot," Dear said in court. 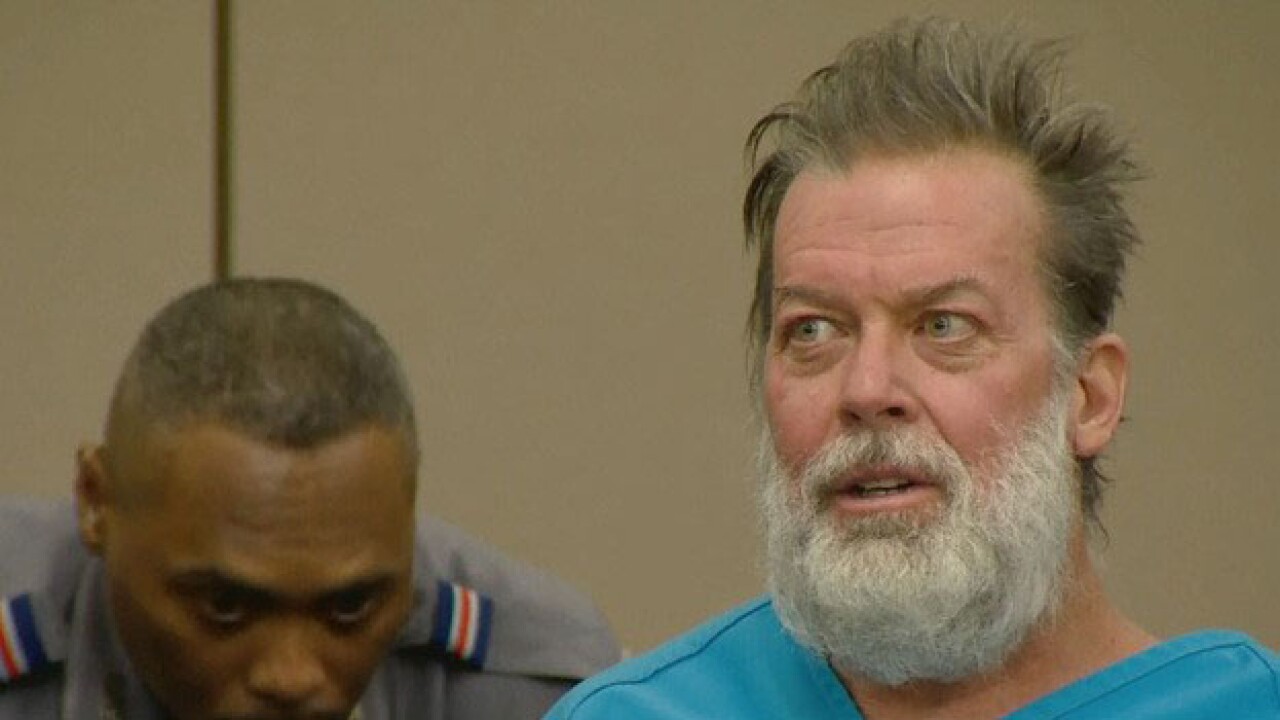 DENVER – Robert Dear, the man accused of shooting and killing three people at a Planned Parenthood clinic in Colorado Springs in November 2015, was indicted by a federal grand jury on 68 counts, the U.S. Attorney for Colorado announced Monday.

Robert Lewis Dear, Jr., 61, appeared before a federal magistrate judge at 2 p.m. Monday in Denver after he was taken into custody Monday morning at the State Mental Hospital in Pueblo, where he has been held as his state mental competency hearings have been ongoing. But he waived his first appearance, which will now be held on Friday.

However, Dear did speak in court on Monday, telling the judge, "I am not crazy. I am just a religious zealot."

He also told the court that "they are afraid of the truth about abortions and selling of baby body parts" while on a rant in which he said he had a right to represent himself. Dear will be held in federal custody and not returned to the mental health facility in Pueblo pending his Friday court appearance.

Dear is charged with 65 counts of violating the Freedom of Access to Clinic Entrances Act (FACE Act) and three counts of use of a firearm during a crime of violence resulting in death where the killing is a murder, according to the indictment.

Dear has been undergoing treatment at the state mental hospital in Pueblo every 90 days for years after he was charged with 179 counts, including murder and attempted murder, in the shooting. He has been deemed incompetent to stand trial and represent himself each time – the first judgment coming in May 2016. A judge ruled in 2017 he could be forcibly given an anti-psychotic medicine.

The U.S. Attorney’s Office said that if Dear is convicted in the federal case, he could potentially face the death penalty – but if that is not considered, he could face a minimum of 10 years and up to life in prison.

U.S. Attorney for Colorado Jason Dunn has not decided whether to seek the death penalty in the case, and the office said it would consult with victims’ families in making that decision.

“The dozens of victims of this heinous act, as well as the Colorado Springs community itself, deserve justice,” Dunn said in a statement. “After four years of lengthy delays in state court, and in consultation with the 4th Judicial District Attorney and victims, this office made the decision to charge Mr. Dear.”

University of Colorado – Colorado Springs Police Officer Garrett Swasey, 44, Jennifer Markovsky, 36, and Ke'Arre Stewart, a 29-year-old Army veteran, were killed in the attack and nine others were injured.

Dear is accused of trying to wage "war" on the clinic for offering abortions and came to the clinic on Nov. 27, 2015 with six rifles, five handguns, more than 500 rounds of ammunition and propane tanks. He shot several people in the parking lot, forced his way into the clinic, and attacked several people inside before he barricaded himself. After a five-hour standoff in which Dear allegedly fired nearly 200 rounds, including at the propane tanks, he was taken into custody.

According to the U.S. Attorney’s Office, the statute of limitations under the FACE Act is five years, and the decision was made to charge Dear under those statutes before the statute expires and as the state case remains pending.

The Fourth Judicial District Attorney's Office, which is handling the state case, said that case remains open and will continue to move forward independently. Dear's next state court appearance is still set for Jan. 9, the office said.

Whitney Phillips, the vice president of communications and brand experience for Planned Parenthood of the Rocky Mountains, issued a statement Monday afternoon.

"Despite the passage of time, the memories of November 27, 2015, remain all too fresh for many of us, and our hearts go out to all whose lives were forever changed by the actions of the gunman,” Phillips said. “We look forward to the day when we can all have an element of closure and until then we continue to come together as an organization to recover and to thrive. Given that this is an ongoing legal matter, we are unable to speak any further on the topic."

The office said that U.S. Marshals will determine if Dear will be held in federal custody after his federal detention hearing. It said that there is not a federal homicide statute under which Dear could be charged.

The death penalty decision would have to be approved by the U.S. Attorney General.