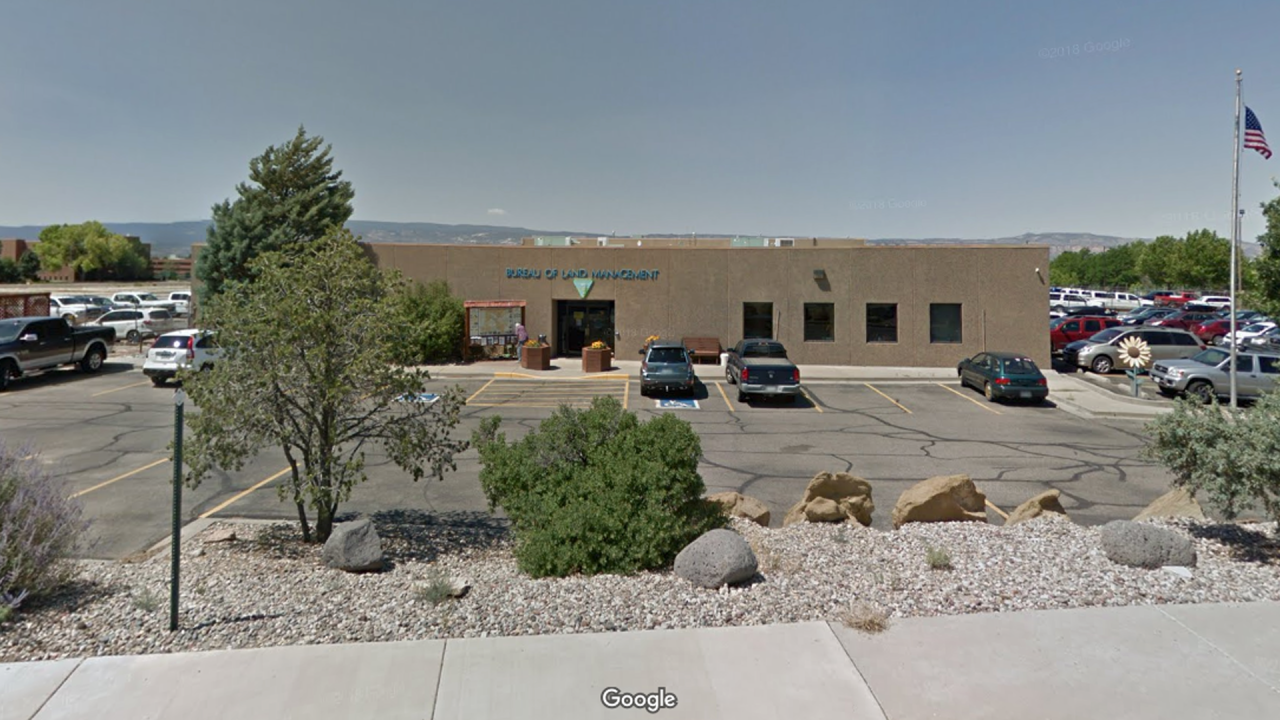 Copyright 2019 Scripps Media, Inc. All rights reserved. This material may not be published, broadcast, rewritten, or redistributed.
Google Maps
The Bureau of Land Management office in Grand Junction, Colo.

LAKEWOOD, Colo. – A total of 85 jobs will be moving to Colorado from Washington, D.C. if the Bureau of Land Management is allowed to relocate its headquarters to Grand Junction – but the majority of those jobs will be based in Lakewood, and the proposed move and restructuring still needs approval from appropriators in Congress.

Twenty-seven positions will head to Grand Junction to begin to establish the new headquarters, including the BLM director, deputy director of operations, assistant directors and some of their staff members.

That’s according to a letter sent Tuesday to Sen. Lisa Murkowski (R-Alaska), the chair of the Appropriations Committee’s subcommittee on interior and environment and Sen. Tom Udall (D-N.M.), the ranking member, by the Interior Department’s Assistant Secretary of Land and Minerals Management Joseph R. Balash, which was shared publicly by Sen. Cory Gardner, R-Colo.

But the chair of the House Appropriations Committee’s Subcommittee on Interior and Environment said Wednesday she only learned of the proposed move from media reports and was not told by Interior until she received a letter on Tuesday.

“The relocation of these leadership positions will significantly benefit the Bureau’s day-to-day operations,” Balash wrote. “The position returns will be realized in cost (e.g. lower office lease costs and locality pay costs) and time savings; enhanced coordination with employees, external partners, and stakeholders; and more informed and improve decision-making based on on-the-ground experience.”

The announcement that BLM headquarters would be moving to the West was made Monday, though officials and Gardner did not release specific details about the move. Both Gardner and Sen. Michael Bennet, D-Colo. – along with other Colorado politicians and leaders – have sought the move for years. They sent a letter in March 2018 arguing that a better quality of life and more-reasonable cost of living would be attractive to “high-quality employees.”

Gardner and Bennet both praised the planned move in statements on Tuesday.

“This is a smart decision that transcends political parties and will generate a positive economic ripple effect through the state of Colorado,” Gardner said. “I commend the Department of Interior for relocating the Agency closer to the people it serves and the public land it manages. Government is best when it is closer and more accountable to the American people, and relocating the directorate of the BLM to Western Colorado will ensure our public lands are protected for many future generation to enjoy.”

Bennet was slightly more restrained in his statement after reading the letter from Balash. He praised the move but said it was simply a step in the right direction to establishing a true Western headquarters.

“This announcement is a step in the right direction and a testament to the work of local leaders,” he said. “But the details released today also suggest more needs. To be done to establish a true national headquarters in the West. We look forward to working with the Department of the Interior to permanently secure BLM headquarters in Grand Junction.”

His office said it was having discussions about the next steps and hoping to get more answers from the Department of Interior about having a full-fledged headquarters in Colorado.

New Interior Secretary David Bernhardt, who is from Rifle, had also pushed for the move.

Jefferson County officials praised the number of jobs coming to Lakewood. Lakewood Mayor Adam Paul said in a statement: “Lakewood has a rich history of working with the U.S. Department of Interior and Bureau of Land Management and we are pleased that they will be entrusting us with more of their talented employees.”

In total, 222 positions will be moved from Washington, D.C. and scattered through the western region under the proposal.

Rep. Betty McCollum (D-Minn.), who is the chair of the House Appropriation’s Subcommittee on Interior and Environment, said in a statement that the subcommittee did not receive notification of the planned move from Interior before it was reported publicly.

“Later in the day, Interior staff members briefed Appropriations Committee staff on the details of the plan,” McCollum said in a statement. “Appropriations Committee staff members identified areas where more information is needed and are submitting questions to the Department. Concerns about costs, employee relocation, and more must be addressed to ensure that any outcome is in the best interest of the American people and Bureau employees.”

“It’s unfortunate that the Department did not find it necessary to consult with Congress either,” McCollum added.

A spokesman for the House Appropriations Committee said that the subcommittee on Interior and Environment believed that the planned move and restructuring constitutes what is called a “reprogramming” by the committee – meaning that it would take funds that have already been appropriated and put toward a different purpose.

The spokesman said that should the move be approved, it would affect FY2019 and FY2020, and possibly beyond, so Interior would have to keep coming back to the committee to address costs related to the move.

Interior believes that the 27 employees could be relocated to Grand Junction this year through voluntary reassignments but I s seeking those commitments by 2019. Balash’s letter to the subcommittee said it planned to relocate employees and realign offices “over the next 15 months until the BLM’s M Street Office lease expires at the end of calendar year 2020.

Interior believes the restructuring and moves could lead to a $50 million payback. Part of that, according to Balash, would come from leasing office space in Grand Junction at about $18/square foot less than an office lease in Washington, D.C. costs. He also wrote that travel costs between the nation’s Capital and the West would be significantly reduced.

As to the impact in Colorado, Balash wrote that positions from almost every directorate within BLM would be located in Lakewood. The letter says that relocating staff will enhance overall operations because of better communication and a closer proximity to local field offices.

“Having these positions relocated to Colorado will enable these professionals to integrate into existing BLM work groups and networks and improve their functional capabilities,” Balash wrote. “This initiative brings employees closer to the land they manage, which will result in more informed and better coordinated decisions made in the work the BLM does, so that land management decisions affecting the way of life for residents across the West will now be made and advised by staff based in the West, not in Washington, D.C.”