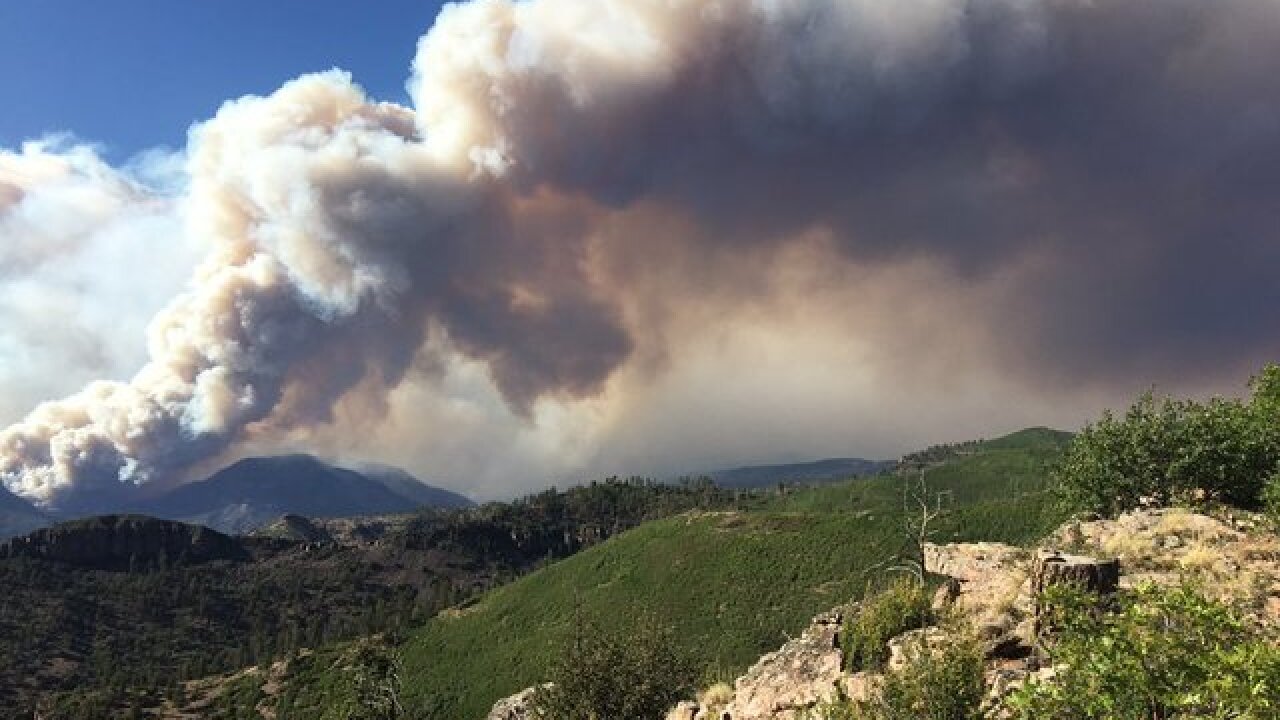 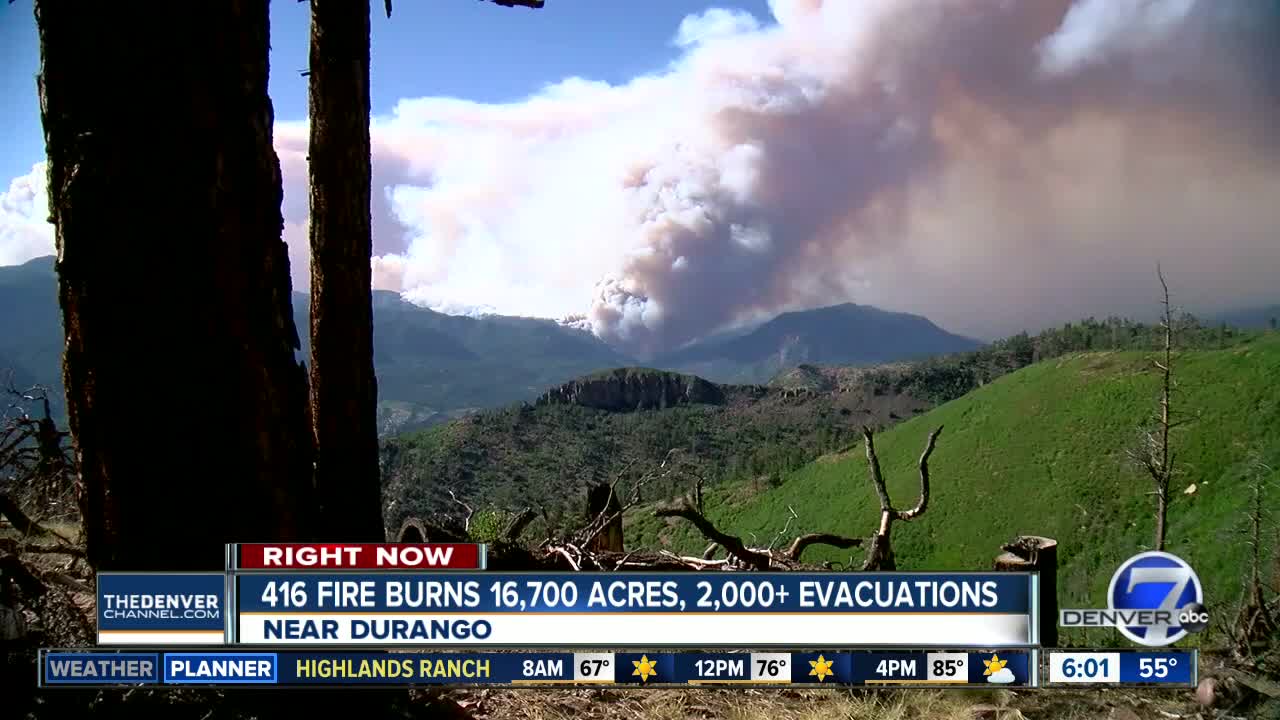 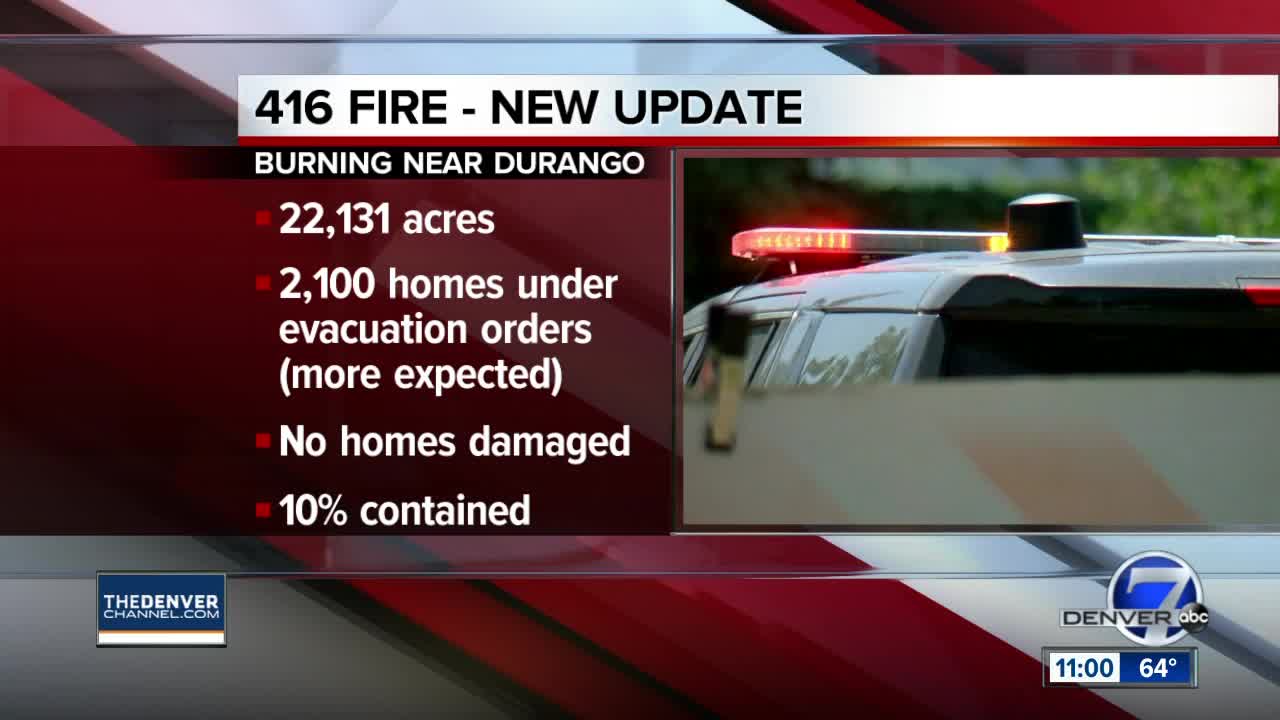 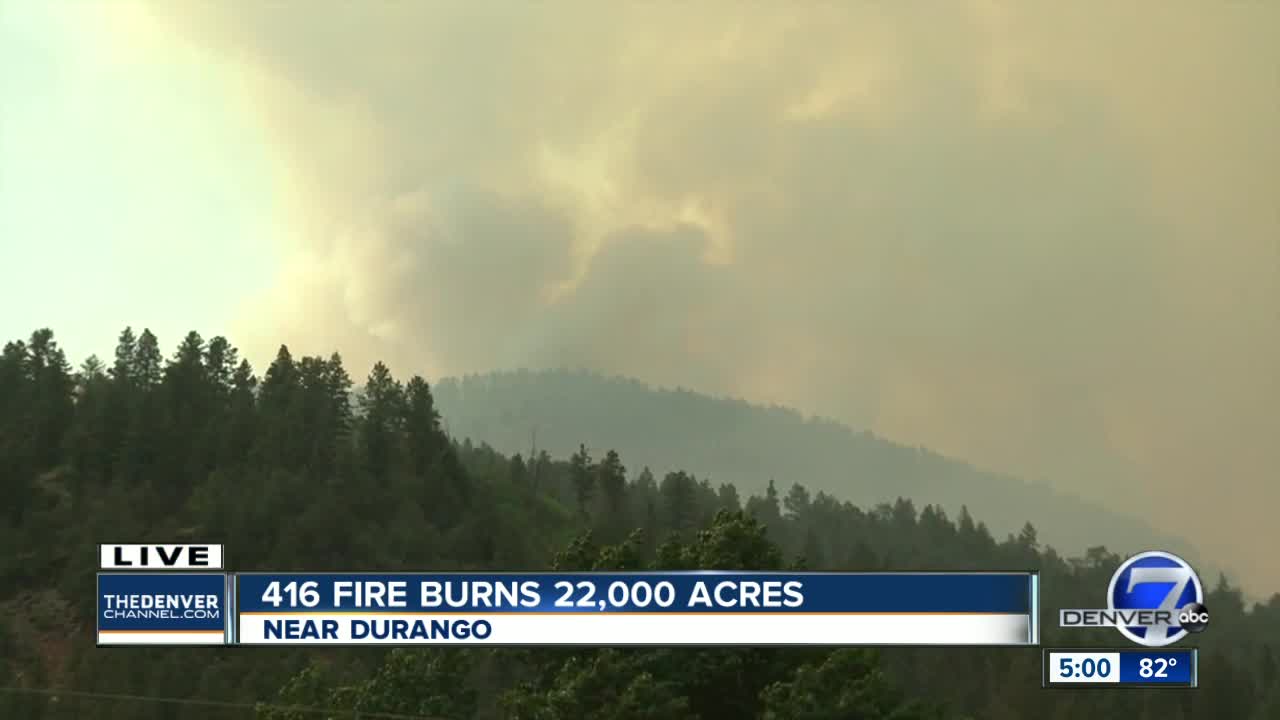 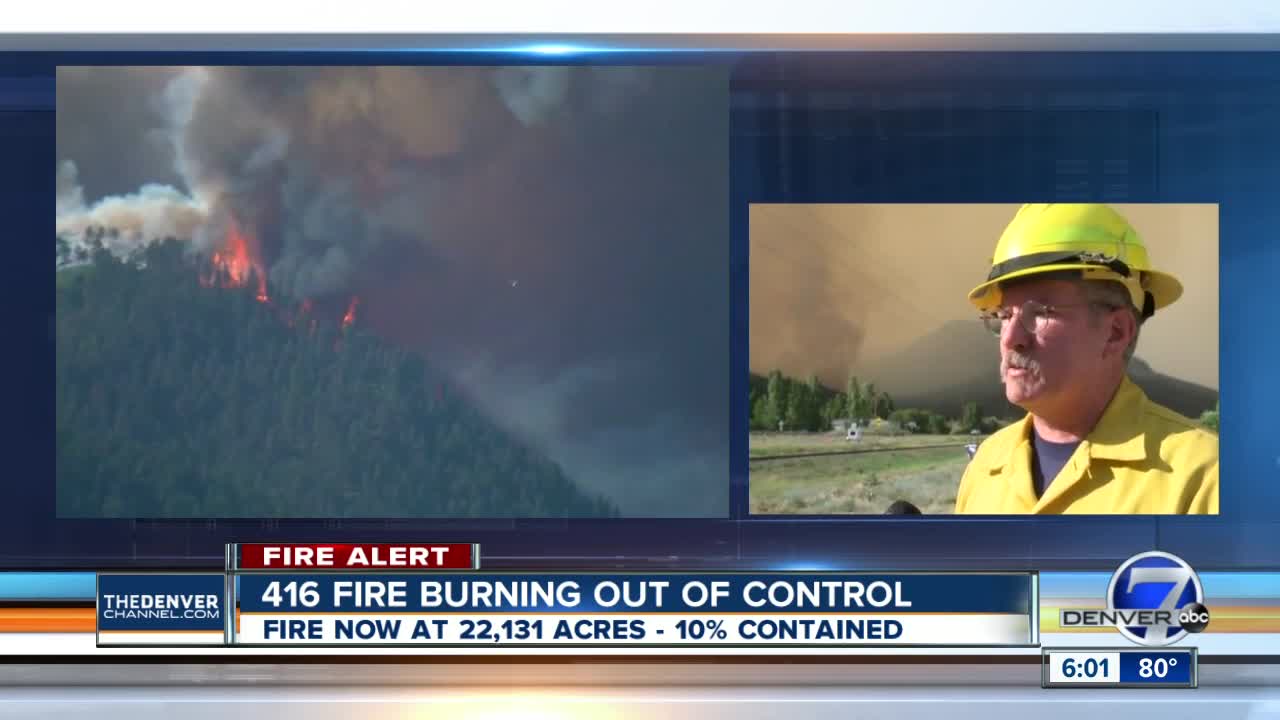 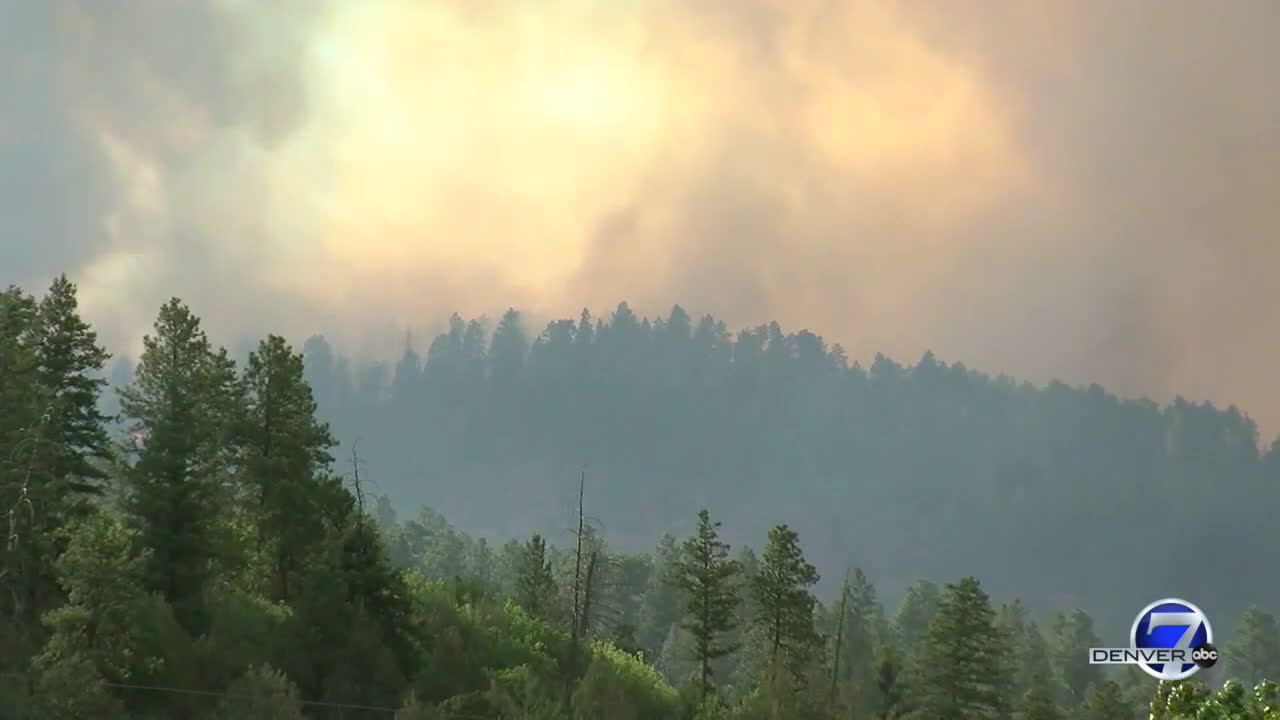 DURANGO, Colo. – The 416 Fire in southwestern Colorado is now more than 22,000 acres in size following a weekend of significant growth.

Officials said Monday morning that the burn area was estimated to be 22,131 acres. That's up from an earlier estimate of 19,500. The fire, which is burning about 10 miles north of Durango, remains 10 percent contained. An evening update had slightly different figures as to the acreage and the containment of the fire, and also contained more information about the Burro Fire burning west of the 416 Fire.

Here’s the evening update from the #416Fire team pic.twitter.com/1wZhkP4Gez

Though the fire has continued to move closer to homes, no structures have been damaged or lost as of Monday. More than 800 firefighters are working to get the blaze under control.

Forestry officials announced Sunday evening that they would be instituting a stage three fire closure in the San Juan National Forest, meaning the entire 1.8-million-acre will be closed to the public.

Officials expect the order to be signed on Tuesday and remain in place until the region receives enough rain to improve fire conditions.

Firefighters expect warm, dry conditions to persist on Monday with temperatures in the high 70s and low 80s. Humidity will remain low and winds should be calmer than over the weekend but firefighters said conditions are ripe for continued fire growth.

With new evacuation orders sent out over the weekend, the total number of homes evacuated due to the fire exceeds 2,100.

On Saturday, evacuation orders were issued for homes in the Falls Creek Ranch and High Meadows subdivisions and for homes on the west side of County Road 203 between Trimble Lane and Cometti/Mead Lanes. On Friday, residences were evacuated on the east and west sides of U.S. Highway 550 from Electra Lake Drive to Hermosa Cliffs Road and the north end of Two Dogs Trail.

In addition to the evacuation orders issued Friday and Saturday, residents from Mead/Cometti/Albrecht Lane west from the Animas River north to Electra Lake Road are under mandatory evacuation orders.

Pre-evacuation notices are in place for homes and businesses on the east side of County Road 203 east to the Animas River between Cometti/Mead/Albrecht Lanes south to Trimble Lane as are the Celadon, Red Tail Mountain Ranch, Elkhorn Mountain, neighborhoods and subdivisions, officials said Sunday.

Additionally, pre-evacuation notices have been made for residences from Mead/Cometti/Albrecht Lane south to Trimble Lane west from the Animas River, Dalton Ranch north of Trimble Lane, Durango Regency, Red Rock Range, Estancia, and the Cottonwoods neighborhoods and subdivisions.

And on Monday afternoon, a new pre-evacuation notice was sent to 127 homes along County Road 205, north from where it intersects with County Road 204 to the Falls Creek Ranch subdivision.

For up-to-date information on evacuations or pre-evacuations, call the La Plata County Emergency Operations Center at (970) 385-8700 or visit www.co.laplata.co.us.