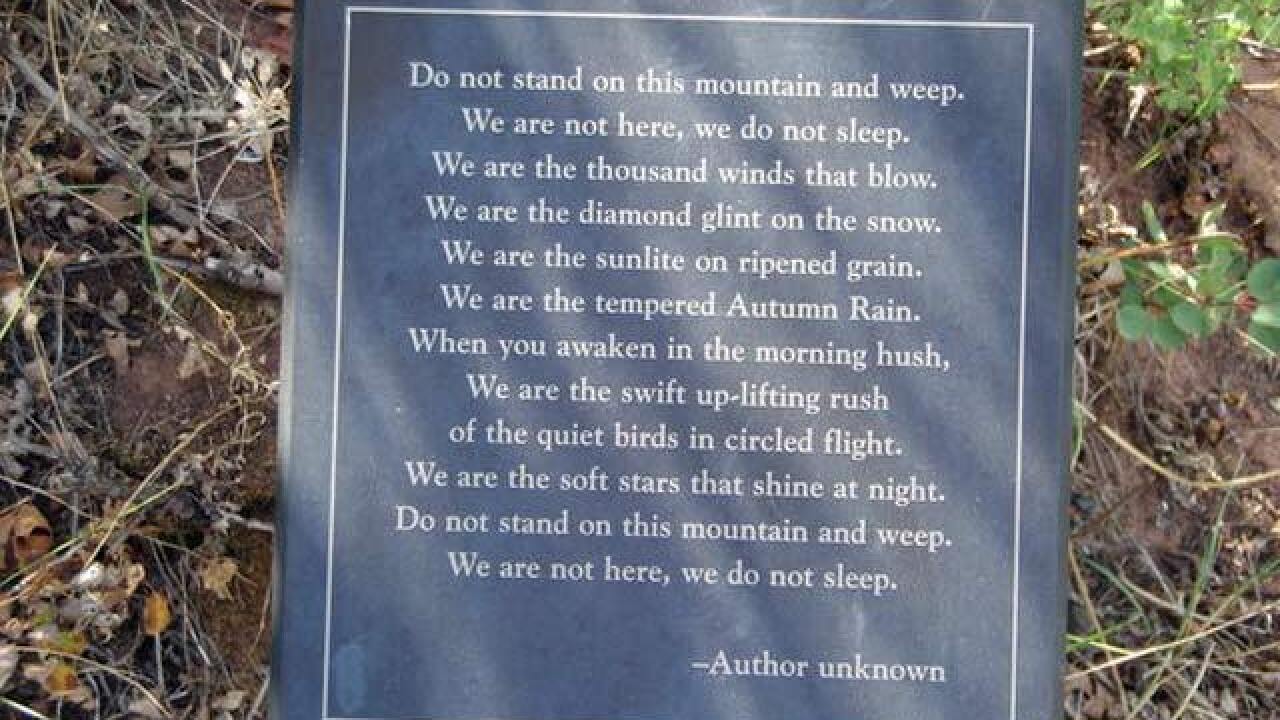 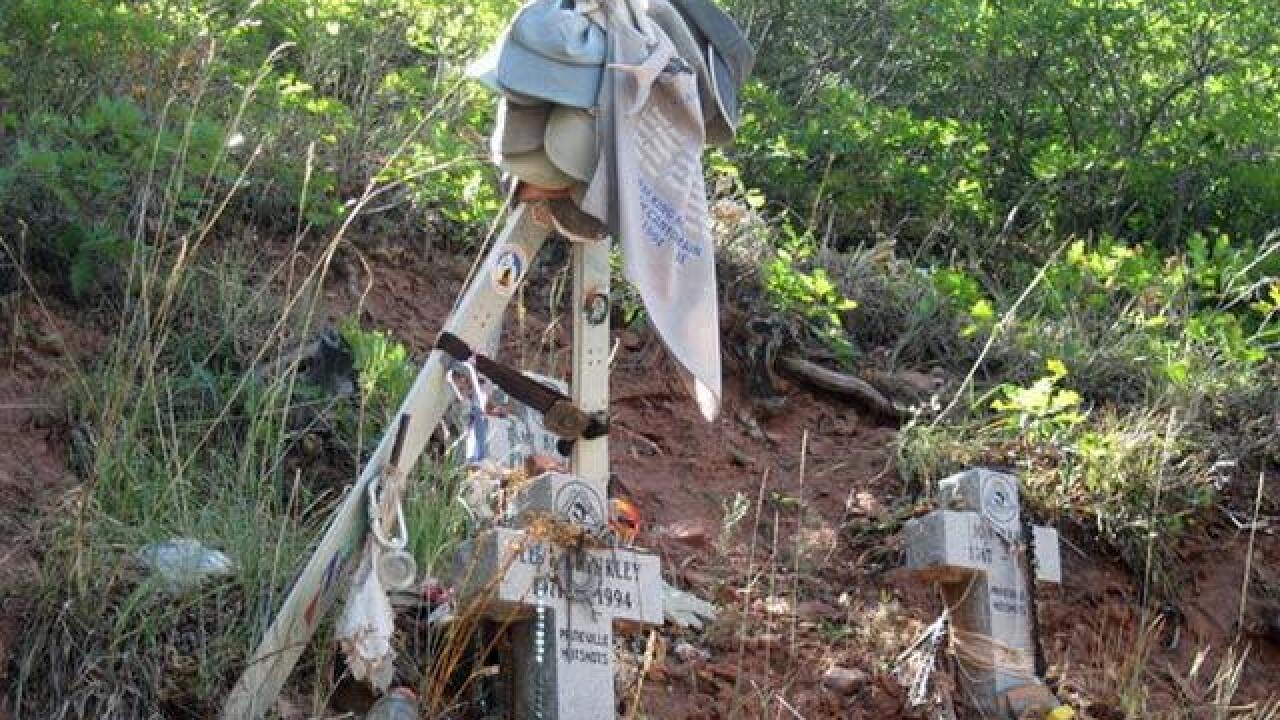 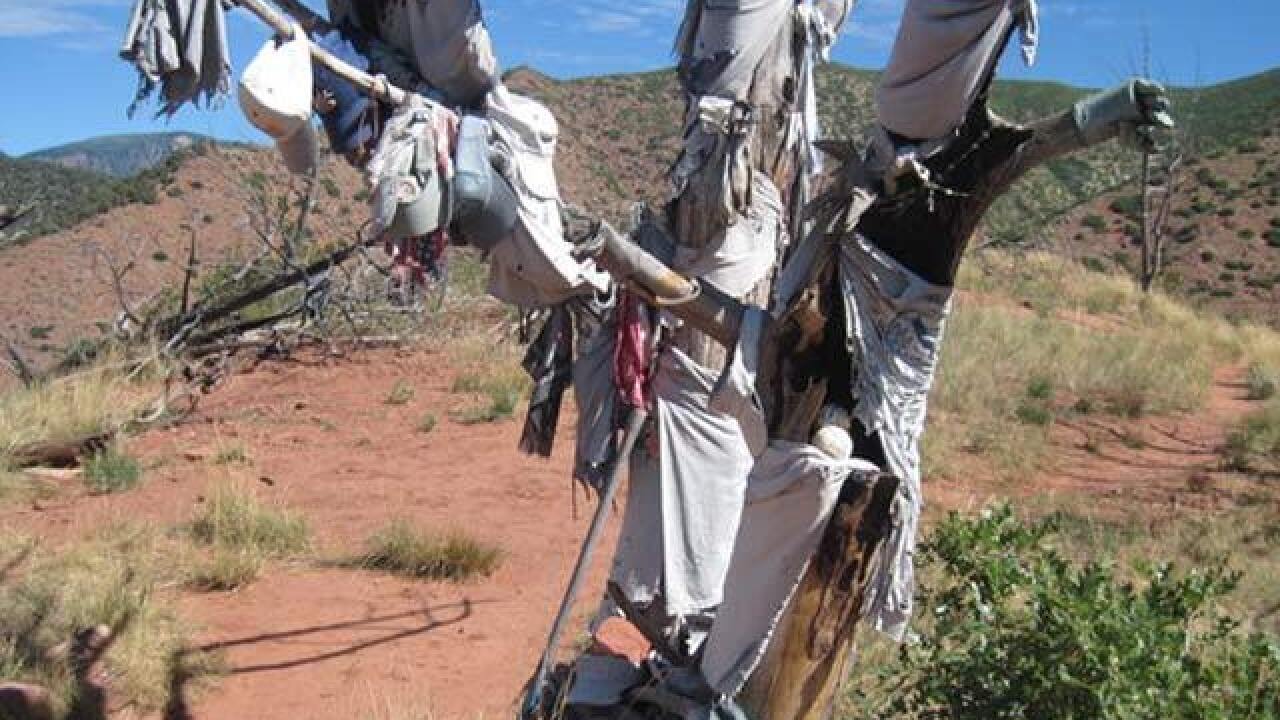 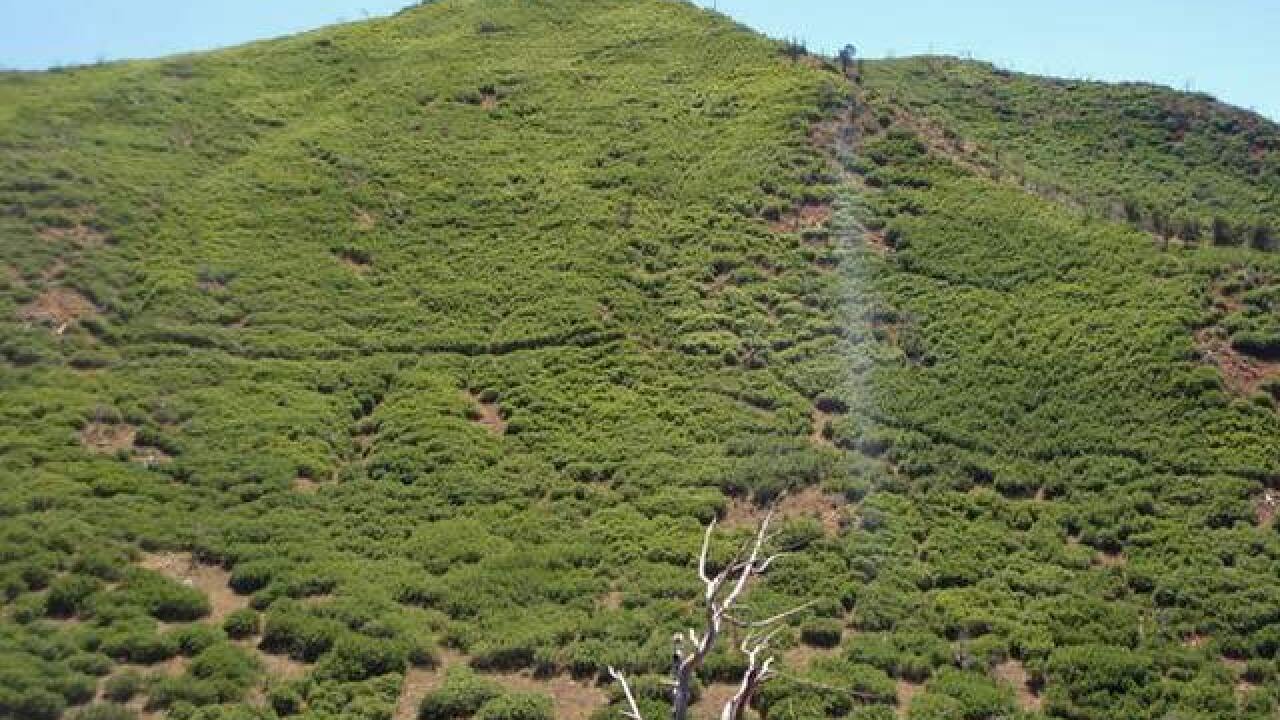 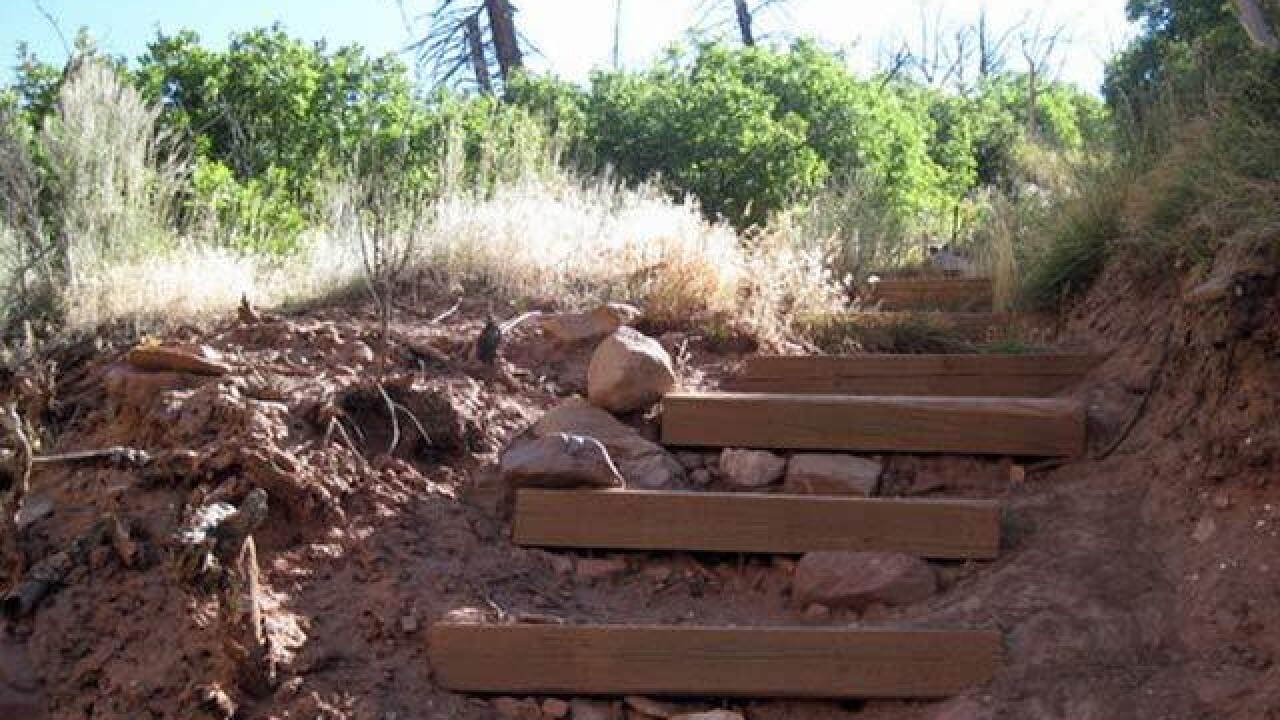 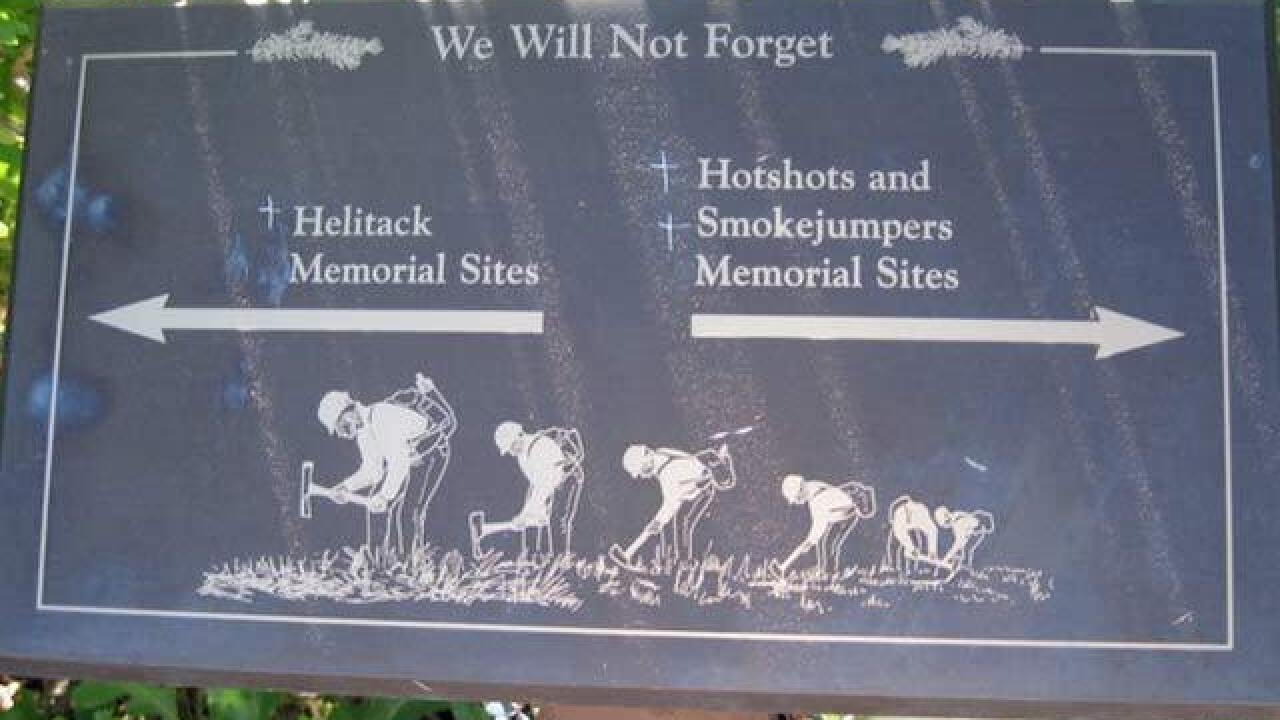 GLENWOOD SPRINGS, Colo. — As hundreds of firefighters from Colorado and other states fight multiple wildfires in Colorado, Friday will mark the terrible day that 14 firefighters lost their lives battling a Colorado wildfire.

In 1994, a group of wildland firefighters from Oregon left their homes, their families and their friends to come to Colorado and save lives and property from an out-of-control wildfire.

On July 6, 1994, some 50 firefighters were fighting the South Canyon Fire on Storm King Mountain near Glenwood Springs when suddenly the winds shifted and increased and the fire blew up.

The trail guide at Storm King says between 4:14 p.m. and 4:18 p.m. the fire was below a crew of firefighters walking out to the west flank of the fire. Two minutes later the fire reached the ridgeline and overtook 12 firefighters. There were no survivors.

Two more firefighters were 0.3 miles away working at a helispot. They also tried to outrun the fire and were overcome.

A trail has been built on Storm King Mountain as a tribute to these 14 men and women.

The trail starts near Interstate 70 about 5 miles west of Glenwood Springs. At the trailhead, hikers will find several signs explaining what went wrong on July 6, 1994 and the stories of the people who lost their lives that day.

The hike starts with a 1-mile trek to the observation point. The trail is quite steep at times, climbing about 700 vertical feet in one mile. Along the way, there are signs about other fires in the area and a sign that explains what the area looked like in 1994 and how the winds blow in this valley.

At the observation point, look across the valley at the place where the firefighters were building the fire line for the South Canyon Fire. In 1994, the slope was covered with 15-foot oakbrush so thick it was almost impossible to walk through.

The firefighters carried 30 to 60 pounds of equipment each. Now imagine trying to run for your life up that slope. One word comes to mind -- impossible.

You can stop here, but the trail continues on. The trail drops into a valley below the observation point, then it begins a 500 foot vertical climb over the next half mile.

The trail is still as rugged and steep today as it was for the firefighters that day. There are stairs to assist visitors in making the climb. However, Imagine this climb with no stairs, 30 to 60 pounds of gear and July temperatures.

At the top of the rise, turn right. At an unmarked trail split, you'll see trees covered in T-shirts, many from firefighters who've made the hike here to remember the fallen. There are also other items like caps, sunglasses, baseballs, gloves and scarves.

The high trail goes to an overlook, the low trail drops to the spots where the 12 smoke jumpers and hot shot firefighters were killed.

First, you'll come to the memorial of Scott Blecha, 27. Friends, family and even strangers have left binoculars, necklaces, a signal mirror, hats and other items.

Continue hiking down the steep trail to the place where five more lost their lives: Jim Thrash, Kathi Beck, Terri Hagan, Doug Dunbar and Roger Roth. Some were right next to each other when the fire swept over them, taking their lives.

At the very bottom of these memorials is a moving poem on a plaque (read it below).

As you hike back up with tears in your eyes, again try to put yourself in their boots. You've been working in the heat when suddenly you're running up this steep slope for your life. Amazingly, more than two dozen firefighters managed to get to safety. This trail is a memorial to those who did not.

When you return to the main trail down, take the side trail 0.3 of a mile to the second memorial site. Two more firefighters had been working at a helispot here. They tried to outrun the fire, but were overcome.

While a plaque honoring Richard Tyler and Robert Browning, Jr. sits on the trail, their crosses are actually in a nearby valley. It looks inaccessible. That's where these two men were running for their lives trying to escape the fire.

As we mourn the lives of 19 lost in Arizona, we also must remember the 14 who came to Colorado to help people they didn't know and never returned home.

The plaque at the bottom of the memorial reads:

Do not stand on this mountain and weep.

We are not here, we do not sleep.

We are the thousand winds that blow.

We are the diamond glint on the snow.

We are the sunlite on ripened grain.

We are the tempered Autumn Rain.

When you awaken in the morning hush,

We are the swift up-lifting rush

of the quiet birds in circled flight.

We are the soft stars that shine at night.

Do not stand on this mountain and weep.

We are not here, we do not sleep.

The Storm King Memorial Trail is off I-70 at exit 109/Canyon Creek. Take the frontage road east about 1 mile to the trailhead.