Meet the 13th Floor Haunted House scare actress who will frighten you (almost) to death.

DENVER — Has Scarlett Casados ever looked in a mirror at Denver's 13th Floor Haunted House, in full costume and makeup, and scared herself? You betcha.

“We have a mirror maze and there was a time I was walking through and I was looking at myself in the mirror because I was waiting to scare a group and I remember staring and I was like, ‘Oh, they did my makeup too good. I’m a little creepy tonight,’” she said, laughing.

It’s easy to believe her as she sat in a makeup chair in the basement of 13th Floor Haunted House getting ready for a night of scares.

The 23-year-old Henderson resident had transformed from an upbeat Halloween enthusiast to a possessed creature with yellow teeth, unnaturally light eyes, a cracked face and large, wild hair. Her skin was blotched purple and yellow, like bruises.

Casados had friends who worked at 13th Floor, which recently moved to its new location at 3400 E. 52nd Ave., and encouraged her to audition for a scare actress position with the company in 2014. She remembers being nervous, but they taught her how to play some of the spooky roles — a victim, a zombie, a witch. She auditioned, landed the part, and has been a scare actress ever since.

“Halloween for me is every day,” she said. “For me in my mind, everything I look at is Halloween-themed-ish. My house is constantly decorated with Halloween decoration.”

In the basement of the business, Lili Aguilar asked Casados to stand up for a picture and smiled at her masterpiece. Aguilar is the artist behind the monstrous look. She has a background in art, she said as she sprayed dark makeup on Casados’s lips, and loves creating monsters out of actors and actresses.

Aguilar spends about 30 minutes on average completing the alcohol-based makeup for each scare actor, depending on their character. It takes roughly as long to remove the makeup with cold cream when the night is through.

READ MORE: 17 scary Colorado haunted houses and attractions to get spooked at before Halloween

This year, Casados said she has enjoyed acting as a witch, particularly a sea witch. In past years, she embraced other characters, like clowns, possessed tongue-twisters and others. Sometimes, it can be hard to shake the characters after work, she said.

She still remembers her first scare — she was dressed as a possessed little girl and hid behind a screen as a projector played.

“I would pop out of it and crawl out,” she said. “I had actually fallen out of it a couple times just because I got so into it and scaring people.”

That excitement hasn’t gone anywhere. She still gets an adrenaline rush when she really scares somebody. And her favorite place to do that? The Swamp Room.

Complete with darkness, lasers and fog, the Swamp Room provides coverage for somebody to crawl along the floor unnoticed.

“So, sometimes, if I’m following a group and they know I’m there, I’ll duck under and they won’t know I’m there and I’ll come up (next to them) and pop up,” she said.

As 13th Floor’s performance manager during the day, she works to think of new creative ways to frighten guests. 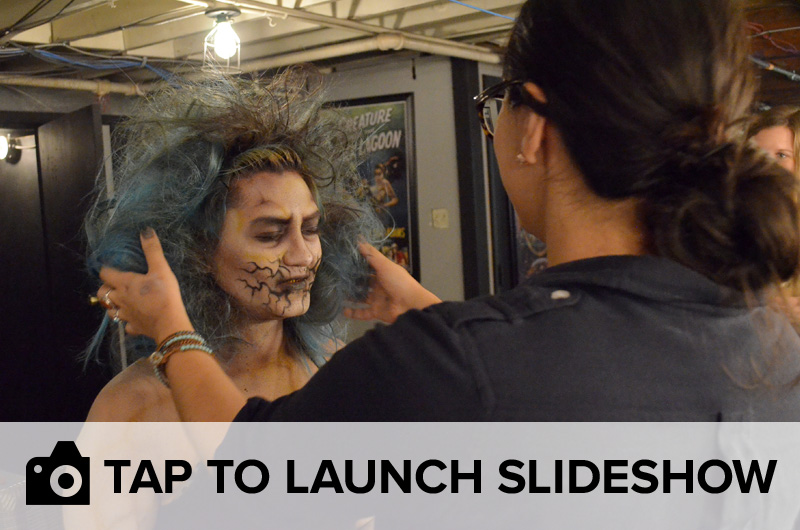 </p><p>On performance nights, the actors will perform these scary stunts for hours. While it may not come as a surprise that the actors and actresses spend the off-season training their bodies for the strength and flexibility required to play the creepy characters, they have to practice for other aspects of the job, too. Take screaming, for example.

“If they try to scream and are not projecting, just using their vocal chords, their voice is gone by the end of the night,” she said.

Every evening during the on-season, the group warms up both their bodies and vocal chords, and stretches before heading into the house to their positions.

Even with the training and preparation, Casados said the sign of a good night is sore muscles the next day.

And that goes to good use when game time comes around. Casados said the haunted house regularly has “scare-outs,” when a person is so terrified in the house that they need to be escorted out.

“I have seen people just drop and cry,” she said. “We’ve had people pee themselves. Or defecate themselves. We definitely are doing a good job if that’s the case.”

It takes a lot of talent and practice to scare somebody that much.

“If I tell people I work at a haunted house, they’re like, ‘Oh, that’s cool,’ but honestly, haunting is a lot bigger than people might think,” Casados said. “There’s a lot of passion and a lot of that goes into this art. It’s not just we just pop out of a hole or whatever… We’ll come here rain, shine, sick, not (sick), tired, dead. We’ll come in and scare so we can do what we love.”

And while getting that good scare offers a rush and sense of pride, it’s the people she works alongside — lovingly called a “haunt family” — that’s the best part of the job, she said.

“We literally go through blood, sweat and tears together and we are a community,” Casados said. “It’s just really cool to see that culture and also do something that we love.”

13th Floor Haunted House is a PG-13 rated event. It will close for the season Nov. 4. There are three new themes this year: Half Alive, where scientists performed experiments that went wrong, the Possession House, where a possessed nun oversees an orphanage, and Trick-of-Treat, a festival-turned-massacre.

“We scare from all angles,” Urban said. “People don’t understand where it’s going to come from and to me, that’s the best part. You’re not going to know what’s gonna hit ya.”