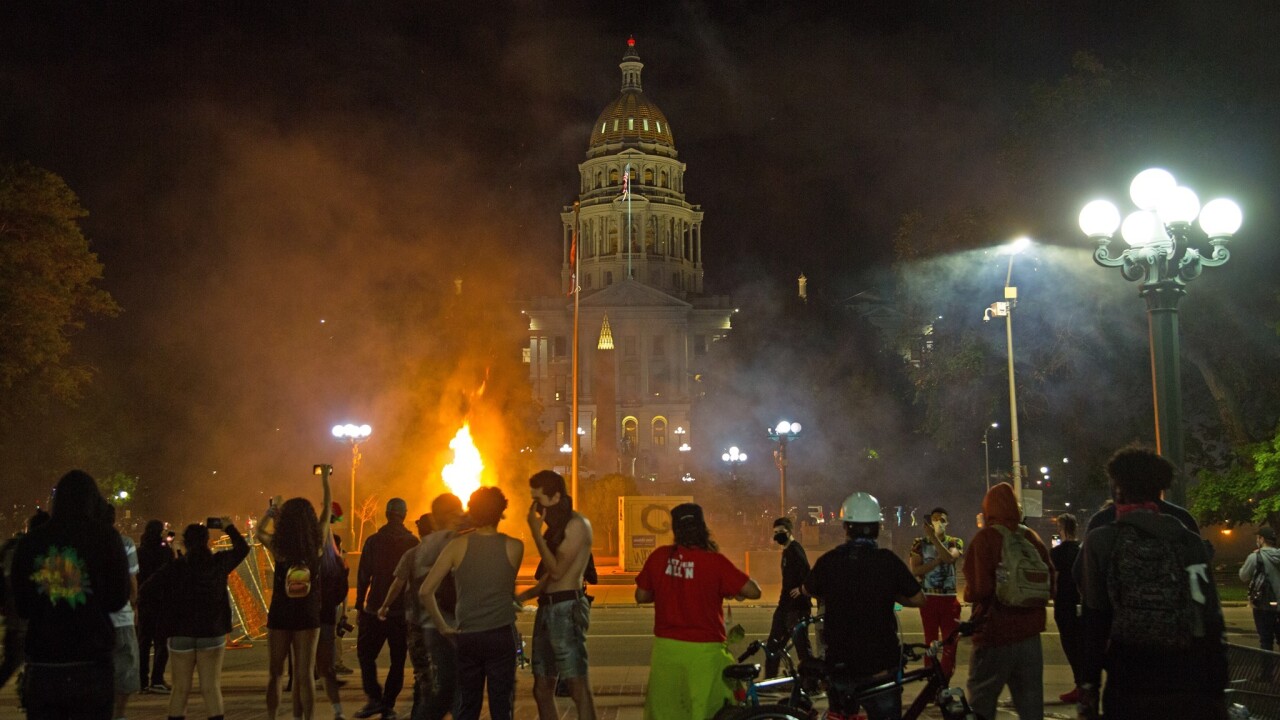 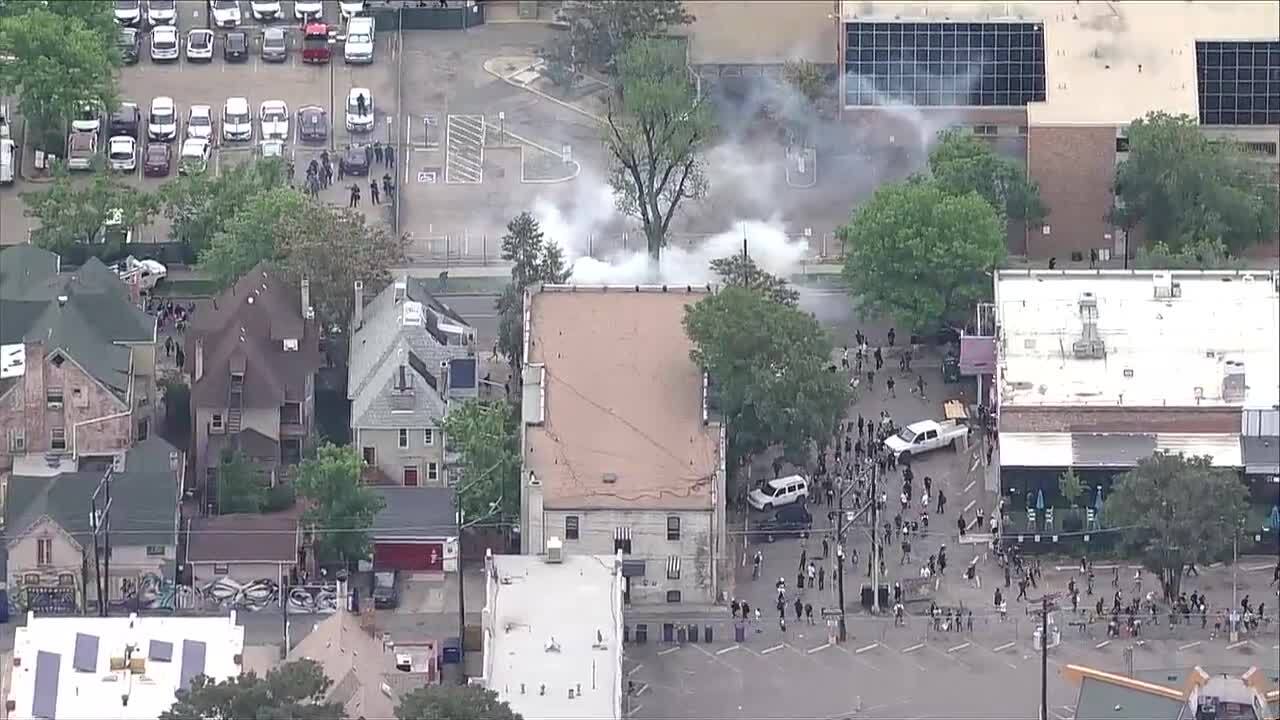 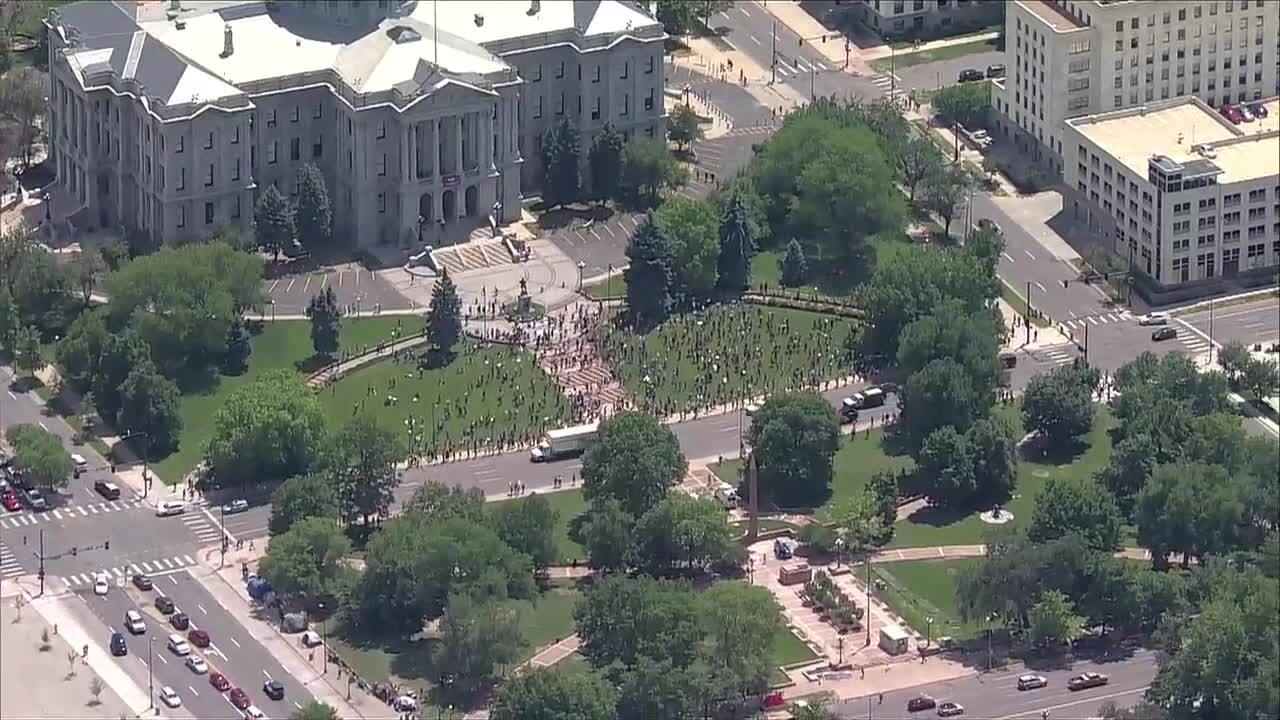 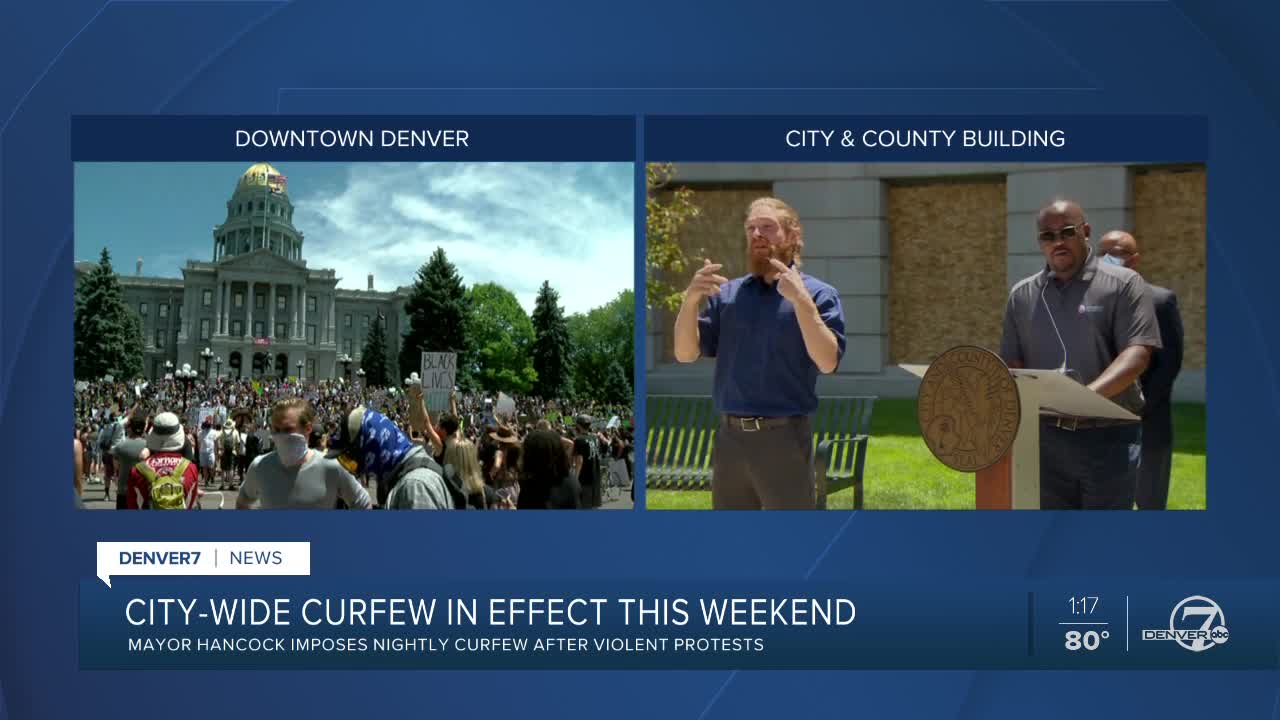 DENVER — City officials were bracing for a third straight night of potentially violent protests in the downtown area, but within an hour after a new 8 p.m. curfew went into effect, most of the large crowds that have gathered near the State Capitol this week had been pushed out of the area by police.

There were several small fires and instances of fireworks, and crowds of protesters built makeshift fences to try to hold their ground as officers began to enforce the curfew.

But by 9 p.m., much of the crowd had dissipated, as protesters scattered into the Capitol Hill neighborhood to the southeast of downtown. Police Chief Paul Pazen said 18 protesters were arrested, including two for felony charges, but that the night was more calm than Thursday and Friday. No officers were injured Saturday night.

"We are grateful, we are thankful, that we are having a more peaceful night than nights in recent past," Pazen told Denver7 Saturday night.

The third day of rally demanding justice for George Floyd had drawn thousands of people to downtown Denver throughout the afternoon Saturday, as crowds protested peacefully. Still, tensions between some protesters and police rose dramatically in the evening hours as the newly-implemented curfew of 8 p.m. drew near.

When 8 p.m. arrived, officers began pushing hundreds of protesters out of the area near Colfax and Lincoln, breaking down a makeshift fence that some protesters had constructed shortly before the curfew.

Police were moving the protesters in one area from east to west, working to establish a perimeter as they slowly pushed protesters out of the area. Officers in other areas were pushing protesters further south.

Protesters later built another makeshift fence, momentarily stopping the officers' push toward the crowd. But again, officers pushed forward, knocking down the barrier constructed by the protesters.

In several instances, small fires broke out, in dumpsters and from fireworks that were set off as protesters were pushed back. But the brief incidents of violence appeared to be contained and by 9 p.m. the crowds had dissipated, as protesters scattered through the Capitol Hill neighborhood.

Earlier officers began deploying tear-gas canisters to disperse crowds about 6 p.m., and noises similar to flash bangs could be heard throughout the crowd. Police appeared to be trying to push protesters out of an area near Civic Center Park.

With the curfew looming, the overall size of the crowd was smaller Saturday night than Friday night, but hundreds of people still roamed through the area after 7 p.m., near Colfax and Lincoln. Dispersion methods such as tear gas and pepper balls were being deployed, but the majority of the crowd appeared to remain relatively peaceful into the evening hours.

Police Chief Paul Pazen said officers would be patient with protesters when the 8 p.m. curfew began, while still enforcing the measure.

"Our mission, truly, is to keep this city safe," Pazen said.

Police were working to prevent the protests from escalating to violence, similar to Thursday and Friday night. Pazen said officers had confiscated weapons and gasoline canisters that had been planted in the protest area.

"These types of weapons are not what you would expect in a peaceful march," Pazen said.

Watch live coverage in the video player below:

7:30 p.m. | Officials had boarded up some government buildings in the downtown area, but some protesters were seen pulling the boards off the windows and spray-painting the buildings.

7:15 p.m. | With the citywide 8 p.m. curfew looming, hundreds of protesters still roamed the area of Colfax and Lincoln near Civic Center Park and the State Capitol. Dispersion methods such as tear gas and pepper balls were being deployed, but the majority of the crowd appeared to remain relatively peaceful into the evening hours.

6:03 p.m. | Police appear to advancing toward protesters, attempting to move the crowds out of Civic Center Park.

5:57 p.m. | Pepper balls being used to disperse crowds that moved up to a police line near Civic Center Station.

5:49 p.m. | Police use tear gas to disperse crowds that had gathered around the RTD Civic Center station across the State Capitol building.

5:40 p.m. | Police say they found and confiscated weapons and gallons of gasoline planted around parts of downtown Denver.

3:51 p.m. | Police launched what appears to be be a smoke bomb or tear gas into a crowd of protesters outside a police precinct building at North Clarkson and East Colfax in Denver.

3:44 p.m. | Crowds have gathered at a Denver police precinct at North Clarkson and East Colfax.

3:06 p.m. | A second rally for George Floyd planned for today is underway at the State Capitol while another group marches through the streets of Denver.

2:01 p.m. | Protesters moved from the capitol building and began marching through downtown Denver.

1:09 p.m. | Denver Mayor Michael Hancock has has implemented a curfew from 8 p.m. until 5 a.m. Saturday through Monday. He also sought and received authorization from the governor to utilize National Guard members to enforce the curfew.

12:45 p.m. | So far, protests have been peaceful. There are police in the area watching the crowd.

12:31 p.m. | Thousands of people — chanting "hands up! Don't Shoot!" and "I can't breathe! George Floyd!" and holding up signs — are peacefully marching around the State Capitol building.

After two straight days of what started as peaceful protests devolved into violence, Denver Mayor Michael Hancock announced that a curfew has been implemented and will be in place from 8 p.m. to 5 a.m. starting Saturday through Monday. He also said the National Guard will be in place to enforce the curfew.

“What happened in our city last night – a city we love, a city we are still working to keep safe from a pandemic –was reckless, inexcusable and unacceptable,” Mayor Hancock said. “We cannot and we will not continue to put the lives of residents, peaceful protesters and law enforcement at risk. We are taking additional steps to help keep people safe and protect public and private property in Denver.”

Exemptions for the curfew include travel for essential activities needed for health and safety and employees traveling to and from work. A fine of up to $999 and/or one year in jail are the possible penalties if caught violating the curfew, the mayor said.

The Denver Police Department has made 34 arrests over the past two nights. Below are the names of 13 suspects arrested Friday night: