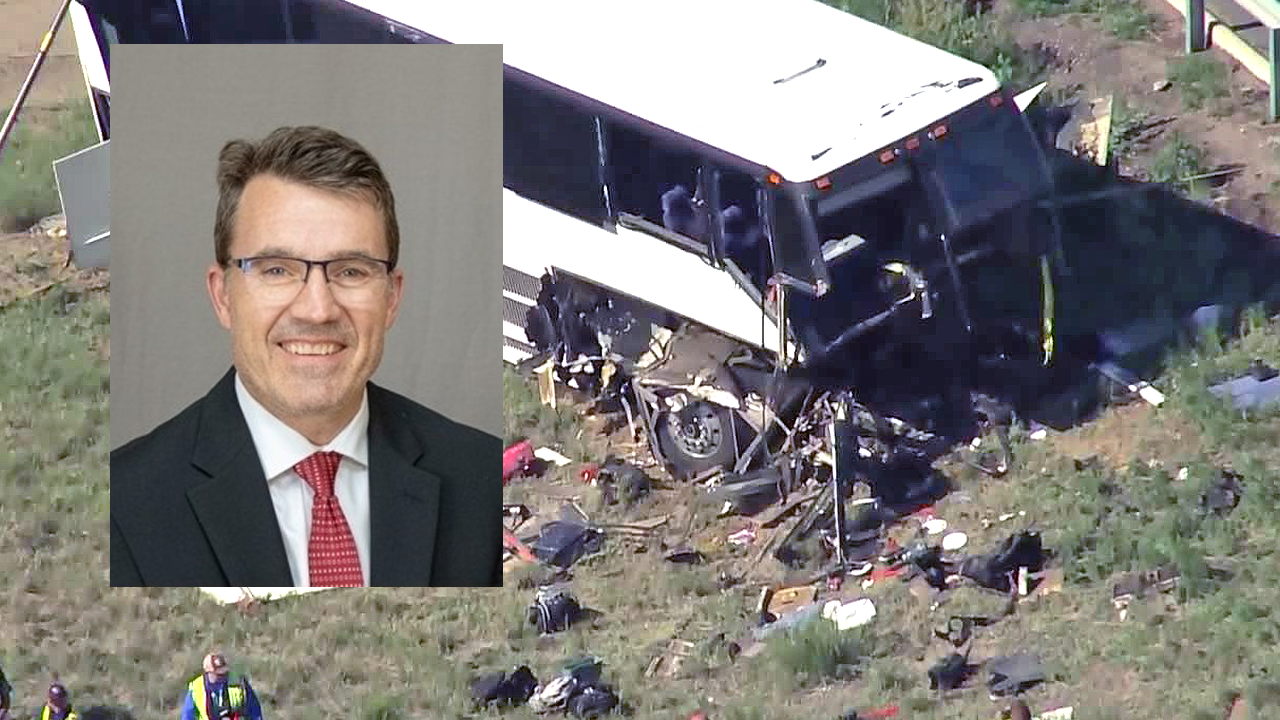 PUEBLO, Colo. — Two men killed in the Interstate 25 crash of a charter bus carrying a church youth group Sunday near Pueblo have been identified.

Officials with the Archdiocese of Santa Fe, New Mexico identified one of the victims as seminarian Jason Paul Marshall, 53. He was training to be a priest and was with the youth group at the time of the accident. The 36-year-old male driver of the charter bus was also killed. The University of New Mexico's Aquinas Newman Center identified him as Anthony Padilla.

Colorado State Patrol confirmed Tuesday that Padilla is 36 years old, not 22 as was originally reported.

The crash injured 13 other passengers — 10 children and three adults. Six people injured in the accident were treated and released Sunday from Pueblo hospitals. Three additional passengers were released Monday. Four others remain hospitalized, with one listed in critical condition. On Tuesday, CSP said the remaining people hospitalized "continue to be released."

The bus, carrying a group from the UNM Catholic organization, was traveling southbound on I-25 when it veered off the highway and struck part of a bridge embankment structure around 2:30 p.m. near mile marker 109. They were returning home to New Mexico from the Steubenville of the Rockies Catholic conference in Denver when the crash occurred 10 miles north of Pueblo.

State Patrol Cpl. Ivan Alvarado said Padilla might have suffered a medical incident, possibly a seizure. He was ejected from the bus when it veered west off the roadway and struck the dirt embankment, Alvarado said. The front of the bus sustained significant damage, leading to the two deaths, he said.

The crash is under investigation.

Follow the Sun, the bus company that owned the bus, issued a statement about the crash on Tuesday:

"The entire Follow the Sun, Inc., team is devastated by the accident that took the lives of one of our passengers and our driver yesterday. The 36-year-old driver was a beloved colleague who, according to initial accounts by Colorado State Patrol (CSP), appears to have suffered a medical episode prior to the accident. CSP also has indicated the bus was traveling below the speed limit at the time of the accident.

"We are actively working with CSP as they conduct their investigation to determine all the facts. It is very important that we understand exactly what happened in case there is anything we or the transportation industry as a whole can learn from it.

"We extend our deepest sympathies to the families and friends of both the driver and the passenger. Our prayers are also with those who were injured."