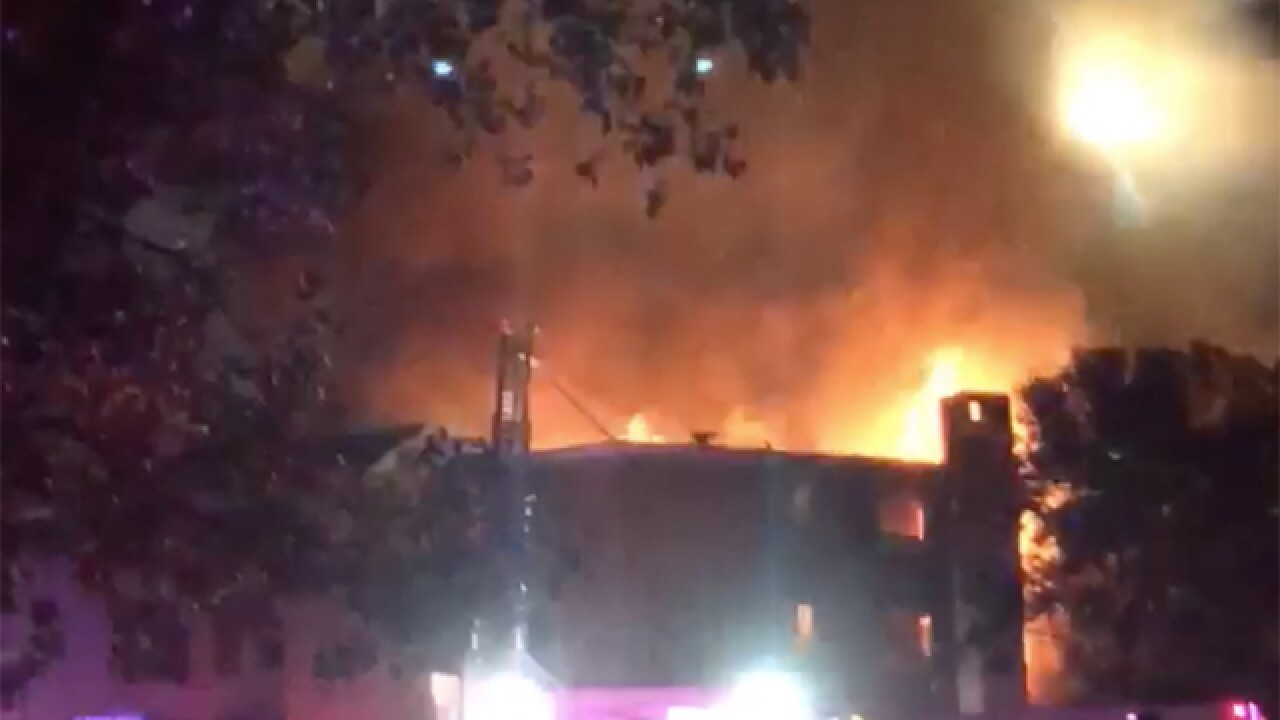 WESTMINSTER, Colo. – The person who had been unaccounted for after a fire tore through a Westminster apartment complex, killing two and injuring at least nine, has been found and is safe, authorities said Monday as they revealed that the building in which the fire happened did not have fire sprinklers inside.

The Westminster Fire Department also said Monday that there were no fire sprinklers in the 69-unit Building E at the Westbury Apartments in Westminster where the fire burned.

"The Certificate of Occupancy for the structure was granted in 1974. At that time fire sprinklers were not required by the fire code," the fire department said in its update.

Multiple people reportedly jumped from second- and third-story windows to escape the fire, which was reported shortly after 2 a.m. Sunday.

"They said they'd catch us," resident Danielle Fasen told Denver7 Sunday, describing how neighbors encouraged her to have her 7-year-old daughter jump into their arms. "I don't know what came over me. I had a sense of calm, and put (Abi) in literally a basket toss like this and threw her over the balcony."

Nicolas Gallegos, who lives in the apartment adjacent to the building that caught fire, said he woke up to a woman screaming and telling people to get out.

Speaking in Spanish, he said he saw heavy smoke billowing from the building first before he saw the flames.

“People started jumping out of the windows and we started catching them but some we couldn’t catch and they fell,” Gallegos said.

Gallegos hurt his shoulder while trying to catch a woman that jumped from her window.

He worked with other Good Samaritans and two police officers to try to help people get out of the building before firefighters arrived. He said it took about 15 minutes for the building to go up in flames.

“Some people that were burned so we put them in the sprinklers in the garden,” Gallegos said.

While he worked to get people out of the building, his wife ran into their apartment to grab clothes for people since some came out wearing nothing.

Meanwhile, Juan Conde and his family saw the damage to their home for the first time Monday morning. They were on vacation in Las Vegas when a neighbor called and told them what happened.

“We (arrived) here and we found everything destroyed, everything lost,” Conde said.

Conde’s apartment is right next to the part of the building that sustained the most damage. He hasn’t been allowed in but says he doesn’t think there’s anything left.

“I was saving some money in my house but I don’t think it’s there. The way I see everything now, I don’t think there’s anything left there,” Conde said.

He says he’s glad his family is safe and that they were not here when the fire ignited but he doesn’t know what they are going to do next.

“Everything is gone so I need to see what’s next and what’s going on with this, what I have to do. I don’t know; I’m lost,” Conde said. “I want to cry but we have to be strong.”

Around 20 members of the Bureau of Alcohol, Tobacco, Firearms and Explosives (ATF) said Monday they had been activated to help Westminster fire and police determine the cause of the fire. This is the 15th time the ATF has been activated during the fiscal year.

“Our heartfelt sympathies go to families of those who died in this fire. Our goal is to find answers for them and the city of Westminster,” ATF Special Agent in Charge Debbie Livingston said in a statement. “ATF’s highly experienced investigators conduct thorough and methodical investigations based on the scientific method, approaching all scenes with an open mind and no preconceptions.”

The Westminster Police Department will make the final determination if anyone will face criminal charges in connection to the fire.

The Westminster Police Department said Monday it was hoping to talk with four people, who they believe are juveniles, whom witnesses said were seen using fire extinguishers to try and put out the apartment fire.

"We do not think these individuals are responsible for starting the fire," Westminster Police Investigator Cheri Spottke said in a Monday news release.

The department asks anyone who witnessed the fire or knows more about its cause to contact the department at 303-658-4360. Anyone with more information about the juveniles seen using fire extinguishers are asked to contact Detective Gordanier at 303-658-4264. Anyone needing assistance after the fire is asked to call the American Red Cross at 1-800-417-0495.