Is Colorado's emissions testing a waste of time and money? Mechanics say yes 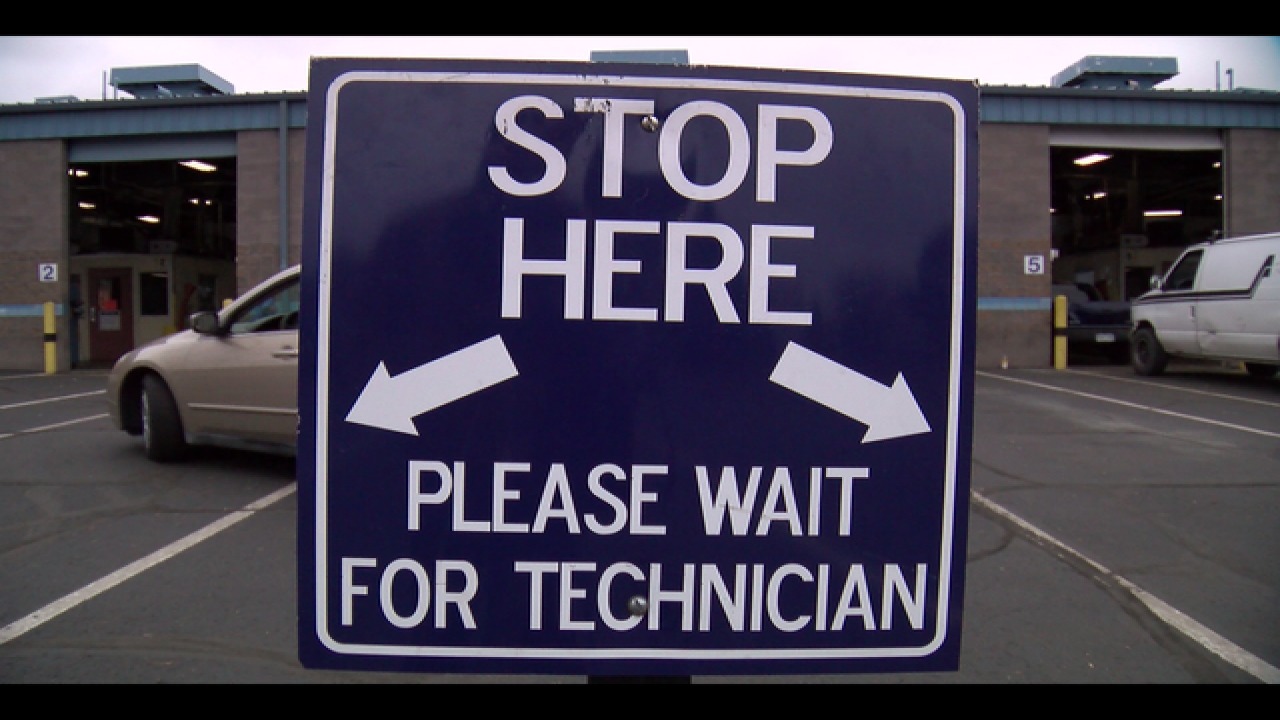 DENVER -- Mechanics don’t often complain about getting too many referrals, but a Denver garage says it’s being asked to repair too many cars that are unnecessarily failing state emissions tests.

The Downing Street Garage is registered with Colorado’s private emissions testing program, Air Care Colorado, to offer repairs on failing vehicles. The garage’s staff reached out to Denver7 Investigates claiming they believe some drivers are losing time and money unnecessarily.

“If we're testing a car four or five times and it's just fine, that's a huge waste of time and money for us to pay someone to bring it down, and now we're repaying test fees over and over as well,” Downing Street’s Tyson Cogley said.

The garage’s main complaint is with the state’s IM 240 emissions test. State regulations require vehicles 12 years and older to be tested on a treadmill-like device called a dynamometer and driven up to 60 miles an hour by a technician as a computer analyzes the emissions coming from the tailpipe.

Colorado’s emission testing program also looks at results from the vehicle’s onboard computer – but only relies upon those results for vehicles eight to 11 years old. Several states rely primarily on those tests for all vehicles with onboard sensors – those made in 1996 or later. And Downing Street’s staff argues the test should be sufficient for Colorado too.

“Every car has the ability, since 1996, to actually store information -- not just currently what's happening, but what has happened,” said Downing Street’s David Guthrie. “It checks things like the oxygen sensors, the catalytic converters, the fuel evaporative emissions system … any one of those items, if they were failed, they would definitely be picked up on by that computer system that the car has on board naturally.”

One of the garage’s customers had to have her car tested four times before finally passing -- without the garage making any repairs. Gayle Lalich’s 1996 Toyota RAV4 failed the first time for having a leaky gas cap.

“I said to myself, ‘No big deal, I'll go get a new gas cap.’ They gave me a printout of the other tests that they had run and the other tests came back, 'Pass.' Looked good,” Gayle Lalich told Denver7.

But when Lalich returned with a new gas cap, her vehicle suddenly failed on the IM 240 testing measures it had passed before. At that point she took her RAV4 to Downing Street.

“We actually confirmed there wasn't anything drastically wrong with the vehicle,” Guthrie said.

The garage’s technicians tested Lalich’s vehicle with their own equipment, which they say indicated it should pass. But when they drove her RAV4 to a testing station, it failed again. Three days later Downing Street’s staff took the vehicle to another station, where it passed. The whole process cost Lalich $200 in labor even though her car did not require any repairs.

“To have climate change happening and that's, in large part, due to emissions-- we want to be checking what we can do about protecting the environment and I totally support that aspect,” Lalich said. “What I don't support is that we have a program that's not working, that's inaccurately giving us results and putting people to unnecessary effort… I don't think it should be that hard to do this accurately.”

State emissions experts told Denver7 Investigates there is likely a scientific explanation for what Lalich experienced. Experts said the test results were likely affected by the new gas cap causing a temporary build-up of pollutants in her gas tank.  They said they conducted a study of that issue a few years ago and determined every vehicle is different in how it purges those pollutants.

Denver7 Investigates obtained a full year of results from the state’s vehicle emissions testing – more than a million test results involving more than 878,000 vehicles. Of those vehicles, the large majority passed on the first test.

But nearly 10,000 vehicles – about 1 percent of the overall total – appeared to fail only the IM 240 test even though it passed every other major diagnostic measure including the onboard diagnostics results. Downing Street’s staffers say when they get calls from these drivers they often just tell those drivers to go back and get tested again.

“If their numbers are very close to the threshold, often times what we'll recommend people do is take it back and get a more experienced person to drive that car on the test … more often times than not, we found that people have surprisingly got through without performing any additional repairs," Guthrie said.

Guthrie argues the IM 240 test is more susceptible to human tester error than simply plugging in to the on-board computer.

"This test revolves primarily around the individual tester who's performing the test and whether or not they drive the car appropriately,” Guthrie said.

Air Care Colorado argues its equipment is calibrated daily and its technicians are trained on how to operate the dynamometer correctly.

“Our dynamometers and our equipment here is basically laboratory-grade, high-end equipment that is very sensitive to the emissions,” Air Care Colorado spokesperson Renee Allen responded.

Air Care Colorado officials said vehicles that fail with results close to the emissions threshold are given an automatic re-test on the spot free of charge. If the vehicle still fails, the driver can get another free test within ten days, with the option of yet another free re-test on the spot if the vehicle fails by a small margin again. Beyond that, drivers typically have to pay a $25 fee for each additional test.

“Colorado has one of the best vehicle testing programs in the nation.”

State officials strongly defend the program, which costs drivers about $50 million in fees and repairs per year according to the state’s most recent audit.

“We take a number of measures in order to make sure we run a good program. I think we do run a good program,” said Chris Colclasure, deputy director of the air pollution control division for the Colorado Department of Public Health and Environment (CDPHE.) “We take people's time and money seriously.”

A state audit in 2012 raised questions about whether the overall environmental benefits of the emissions testing program are worth the costs. The audit also suggested the state consider simply relying on the onboard diagnostics for cars from 1996 and newer and phasing out the dynamometer test to save drivers money.

In response to the audit, the state narrowed the model years of cars subjected to the IM 240 test. But state officials argue the IM 240 test does have value.

“It’s not about finding a test that a vehicle will pass.  It’s all about finding excess repairable emissions from broken vehicles.  IM 240 is better at this on older vehicles. OBD and IM 240 are different tests and they measure different things. If Colorado applied an OBD test to these older, broken vehicles, then yes, these high emitting vehicles would continue to produce repairable, excess precursors to ozone air pollution,” CDPHE spokesman Mark Salley told Denver7 in a written statement.

“Is the IM 240 test more beneficial than an onboard sensor on a vehicle -- even going back to 1996?" Denver7 investigative reporter Ryan Luby asked Air Care Colorado’s spokesperson.

“I wouldn't necessarily say more beneficial. I think that they're very similar tests in terms of what they're looking at,” Allen responded.

Allen later sent a written statement, adding in part, “As vehicles age, OBD's ability to discriminate high emissions is reduced, so Colorado uses the IM 240 tailpipe emissions inspection on these cars because it is a better indicator of high emissions on older vehicles.”

Denver7’s analysis of one year’s data found about 2000 drivers failed on IM 240 tests more than three times before ultimately passing. The data does not indicate how many of those vehicles had to be repaired in order to pass. But the state said there are limits to the number of times it is willing to test those vehicles free of charge.

"The emissions from any one car, as we say on our website, can vary from day to day or test to test.  That's one reason we give people a second chance test,” Colcasure told Denver7 Investigates.

"There's not a penalty for failing your test. You can have your car tested as many times as it takes in order to [pass],” he continued.

"You have to pay for it,” Luby responded.

“I realize every penny someone has to spend is a burden, but we have a reasonable program,” Colcasure continued.

State and Air Care Colorado officials say they are always looking for ways to make the program more convenient for drivers, including implementing RapidScreen drive-by roadside tests that allow “exceptionally clean” vehicles to skip a trip to the inspection station.