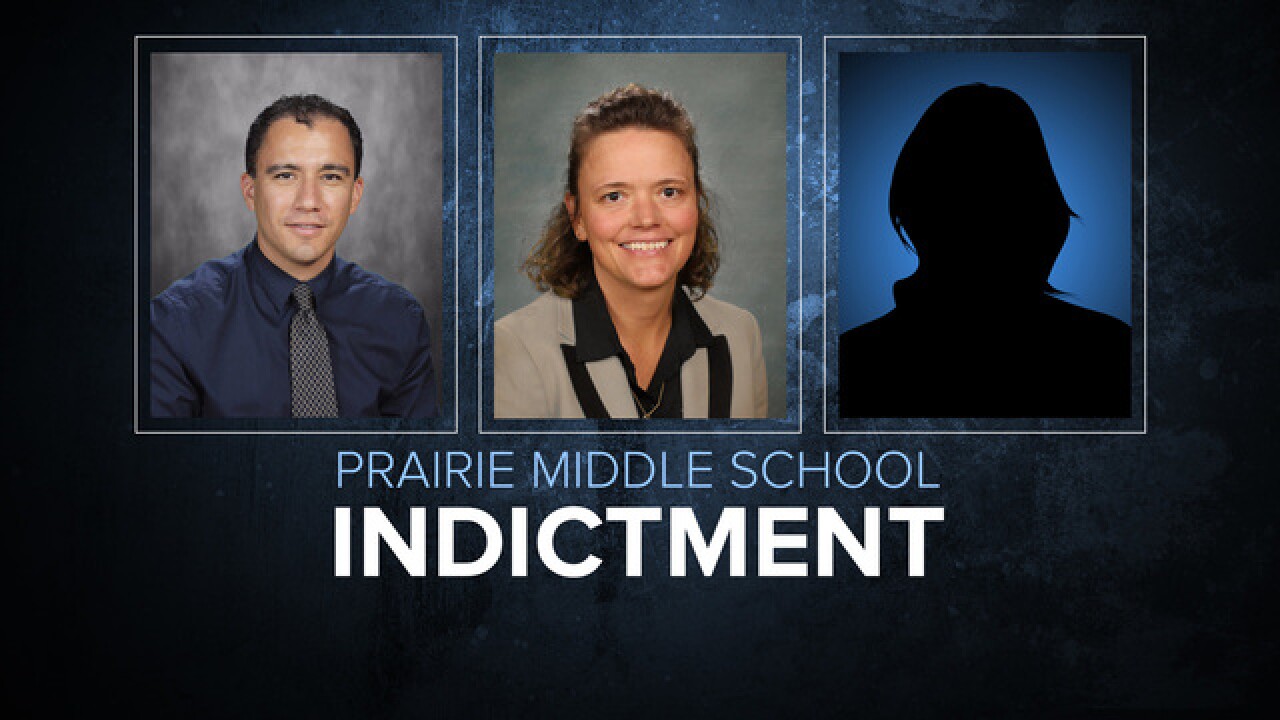 AURORA -- Three Cherry Creek school leaders -- a principal, assistant principal and former counselor -- were indicted on a charge that they failed to properly report claims of sexual assault by a teacher on a 14-year-old student and, in fact, suspended the student.

The claims arose after Aurora Police arrested Prairie Middle School social studies teacher Brian Vasquez in August 2017 and accused him of physical abuse and exchanging nude photos with several students over the course of several years.

The indictment centers on allegations made by a specific student in 2013. The student, identified as "child victim" or "CV," said Prairie Middle School Assistant Principal AJ MacIntosh and Principal David Gonzales told her the accusations would be devastating to Vasquez's career.

Both Gonzales and MacIntosh are currently on administrative leave, according to the Cherry Creek School District.

According to the indictment, the student said MacIntosh pressured her "to recant her disclosure of sexual abuse by Vasquez." It also says school personnel notified Vasquez of the allegations who later met with the victim to "impress upon her the devastating effects her disclosure would have on his career and family."

As the student met with MacIntosh and Gonzales together, she stated that she had "made up her disclosure," and was then told she would be suspended from school for several days, according to the indictment.

But four years later, according to the indictment, Vasquez admitted to police he did in fact sexually assault that student and several others.

According to that affidavit, Vasquez told police last summer he "understood the relationships were illegal and he was waiting for the time when they were all revealed. Vasquez advised that he told himself that when his relationships with the juvenile students became known, he would take responsibility for his actions and pay the consequences."

During testimony to the grand jury, the indictment says MacIntosh said she was "generally aware of the District's expectations regarding the immediate reporting any allegations of sexual abuse, she nonetheless believed it was her individual responsibility to conduct her own personal investigations of allegations of impropriety of any type on the part of school staff, before complying with her obligations under the law."

Furthermore, the indictment says MacIntosh remembered "CV," but claimed that she did not remember the sexual abuse claims. "MacIntosh further claimed that she could not remember her involvement in any aspect of the disciplinary process resulting in CV's suspension from school, even when presented with official documentation from the school district bearing her signature, and confirming her presence" at a meeting with the child victim, the girl's parents, and Vasquez himself.

The indictment says Cherry Creek Schools superintendent Harry Bull testified that it would be inappropriate to question an alleged victim of sexual abuse with the alleged perpetrator in the room, as Macintosh and Gonzales are accused of doing.

Gonzales also claimed to have no memory of the sexual abuse allegations against Vasquez, according to a summary of his testimony to the grand jury seen in the indictment.

Also named in the indictment is Cheryl Somers-Wegienka, a former Prairie Middle School counselor, who was involved in the student's suspension.

Somers-Wegienka, MacIntosh and Gonzales face a misdemeanor charge of failing to report child abuse or neglect.

"This letter is to inform you that two Prairie Middle School administrators, Principal David Gonzales and Assistant Principal A.J. MacIntosh, have been placed on leave pending the outcome of legal proceedings related to charges for failing to report child abuse. Former school counselor Cheryl Somers, who no longer works for the district, has also been named in the legal proceedings, all of which stem from a grand jury investigation. We will continue to cooperate fully with law enforcement in this matter. It is important to note that at this time none of these three have been convicted of any crime.

"Prairie has a strong school community and we will continue to work together with staff, teachers and parents to provide outstanding educational opportunities to all of our students. A plan is being developed to provide interim administrative support. We will communicate additional details by Friday, January 12."

"We are aware of the indictments. The two individuals who are employed with Cherry Creek Schools, Prairie Middle School Principal David Gonzales and Assistant Principal A.J. MacIntosh, have been placed on administrative leave pending the outcome of the court proceedings. We will continue to cooperate fully with law enforcement and the District Attorney’s Office."