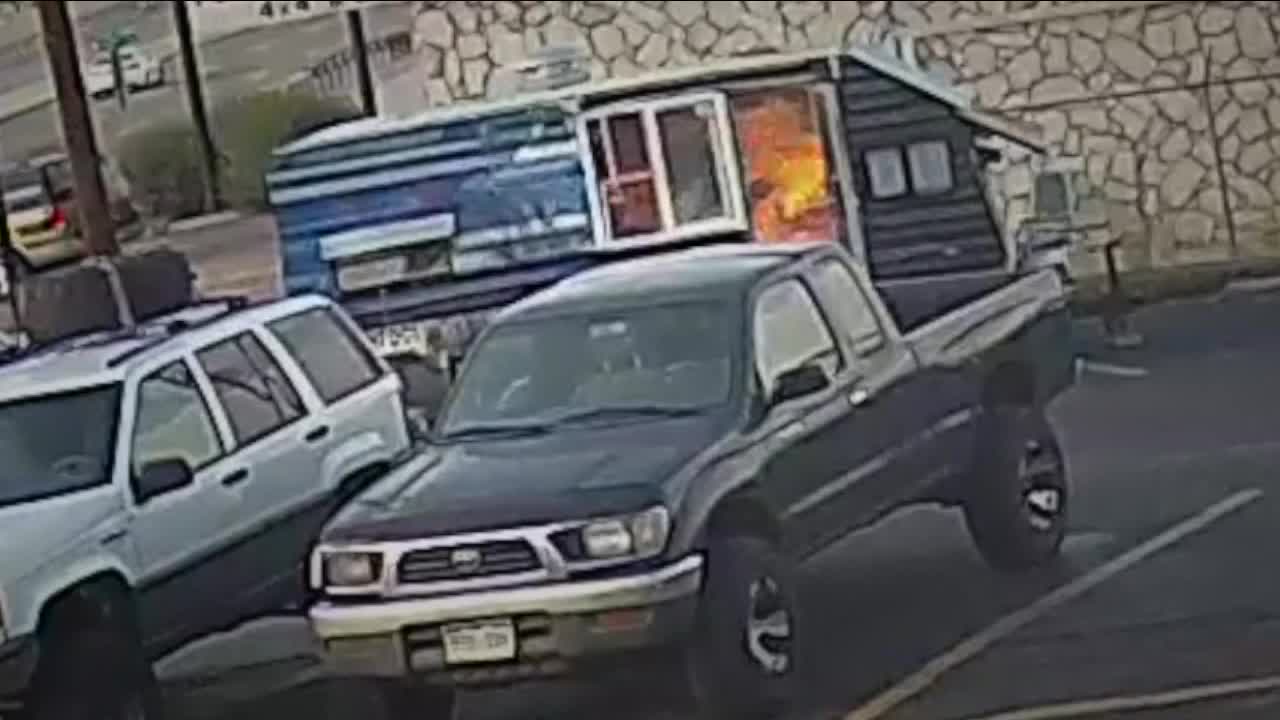 When Denver7 Investigates first started investigating a Colorado food truck salesman two years ago, the reports were about rip-offs and fraudulent, unsafe parts. Now, that same salesman is back on the radar after fire tore through a food trailer he was paid to modify.

DENVER — When Denver7 Investigates first started investigating a Colorado food truck salesman two years ago, the reports were about rip-offs and fraudulent, unsafe parts. Now, that same salesman is back on the radar after fire tore through a food trailer he was paid to modify.

Captured on surveillance video, the explosion took place while her entire family was inside her food trailer.

"I see my kids, and they're burnt," said Ordibes, wiping tears from her eyes. "How did we survive? How did we live?"

In the beginning, owning a taco truck was a dream come true for Ordibes and her family, she said, until they met Larry Perez.

"This is my very first receipt that I received from him: Restaurant Equipment Warehouse. Different receipts have different business names, but his name is right here. This is my proof," she said, showing another receipt from when she paid Perez to modify her food trailer. "See here, it says 'Two gas lines.'"

Ordibes also showed texts from Perez telling her the food trailer was ready for pick up on Sept. 23. That same day, while she and her family were setting up to serve tacos in the Players Club parking lot, a ball of flame blew up into her face, rupturing her ear drum and causing minor burns over much of her body.

"I was just cooking like this, and we were laughing, and all of a sudden I saw a ball of fire. Boom! Hit me," she said.

Amazingly, her family made it out of the food truck, but their burns are still healing.

"I think it was because negligence," she said. "We paid him to hook up the vertical grill, but he didn't hook it up so it was leaking gas the whole time."

In a statement to Contact Denver7, Adams County Fire Rescue stated what caused the fire: "A gas supply line was found in a disconnected position to a cooking appliance."

Ordibes said Perez sent her $200, but that does not pay for her family's medical bills or damage to the trailer. When she reached out to Denver7 Investigates, the name Larry Perez was very familiar. Back in 2018, Denver7's investigation into Perez and his many businesses exposed fraudulent practices, including taking thousands from clients who received little in return.

The attorney general reported that the food trucks Perez was supposed to build were either never delivered, were equipped with "unsafe, fraudulent parts" or "frequently failed safety inspections."

The fraud was so widespread that last year a Denver District Judge ordered Perez and his business associate to pay $4.5 million in the case, issuing a permanent injunction for any involvement in the food truck fabrication process.

Since, then Denver7 Investigates found Perez has been working out of his father's business, selling restaurant equipment.

"He doesn't work here anymore," said one employee, who said Perez lists their equipment online, but he is not supposed to have anything to do with the food truck industry.

Ordibes took us to the unmarked location where she said Perez and a man named Miguel had been working on her truck. Workers there said they did not know when Perez would show up, saying they had not seen him that day.

On the phone, Perez referred Denver7 Investigates to his attorney, stating that he is only selling restaurant equipment and is not involved in food trucks.

Ordibes said she has also paid Perez $6,500 to build her a new taco truck, and he has not delivered or responded to her calls since the fire.

"I want people to know this is serious, and it's still going on," said Ordibes. "These are people's lives that he's playing with."

A spokesman with the Colorado Attorney General's Office stated that his office cannot report or comment on ongoing investigations, but anyone violating a court order could face fines and possible jail time. They welcome tips or complaints regarding violations.

Meanwhile, Ordibes and her family are struggling after their main source of income was destroyed. They have launched a GoFundMe to help pay their bills and buy a new taco truck.