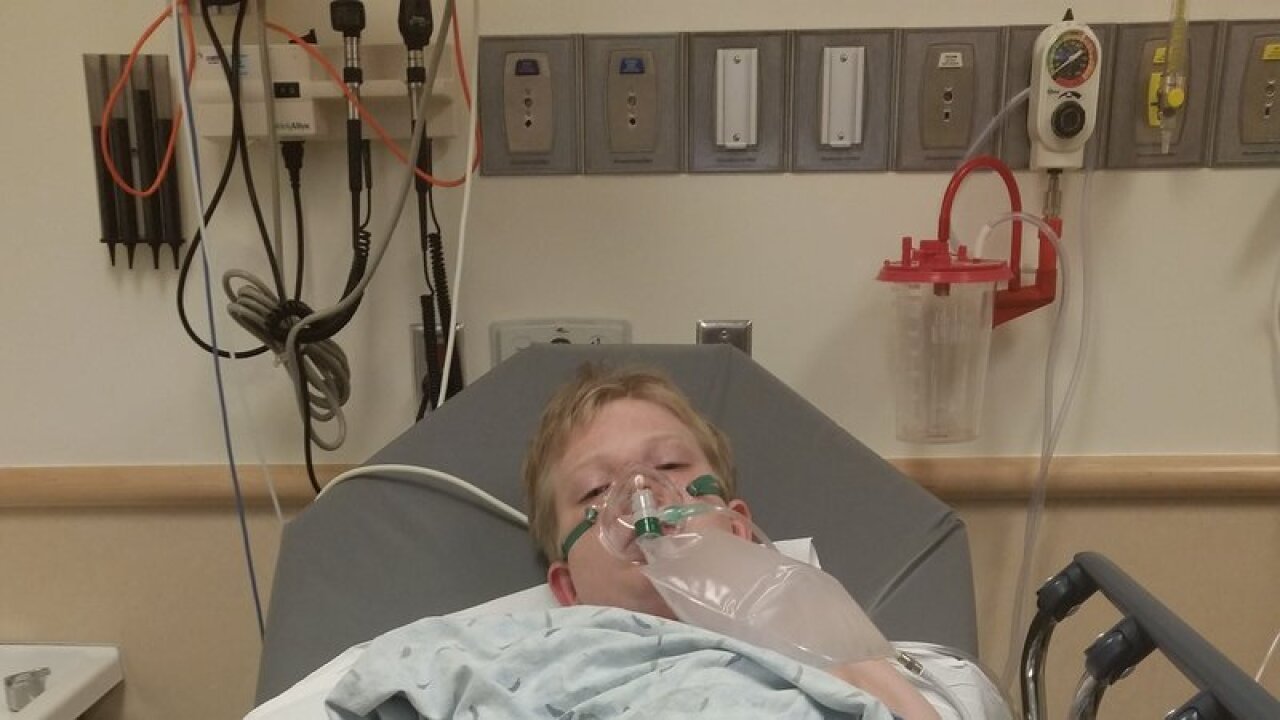 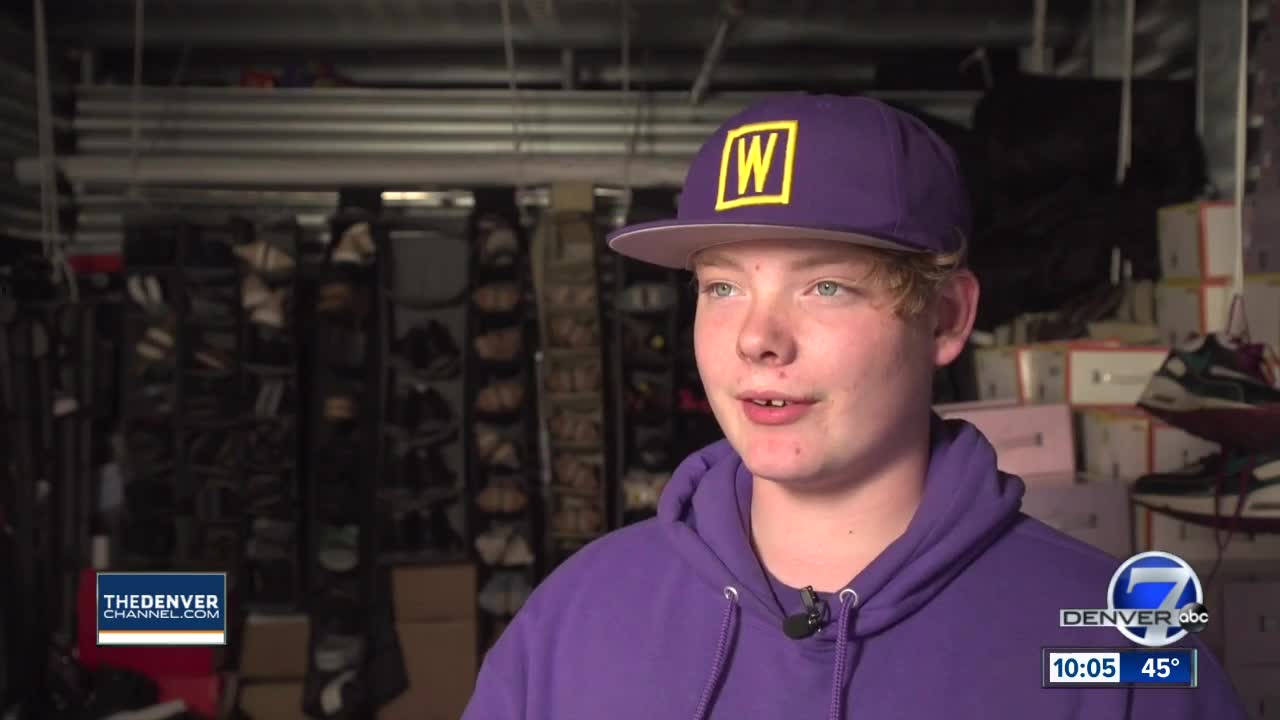 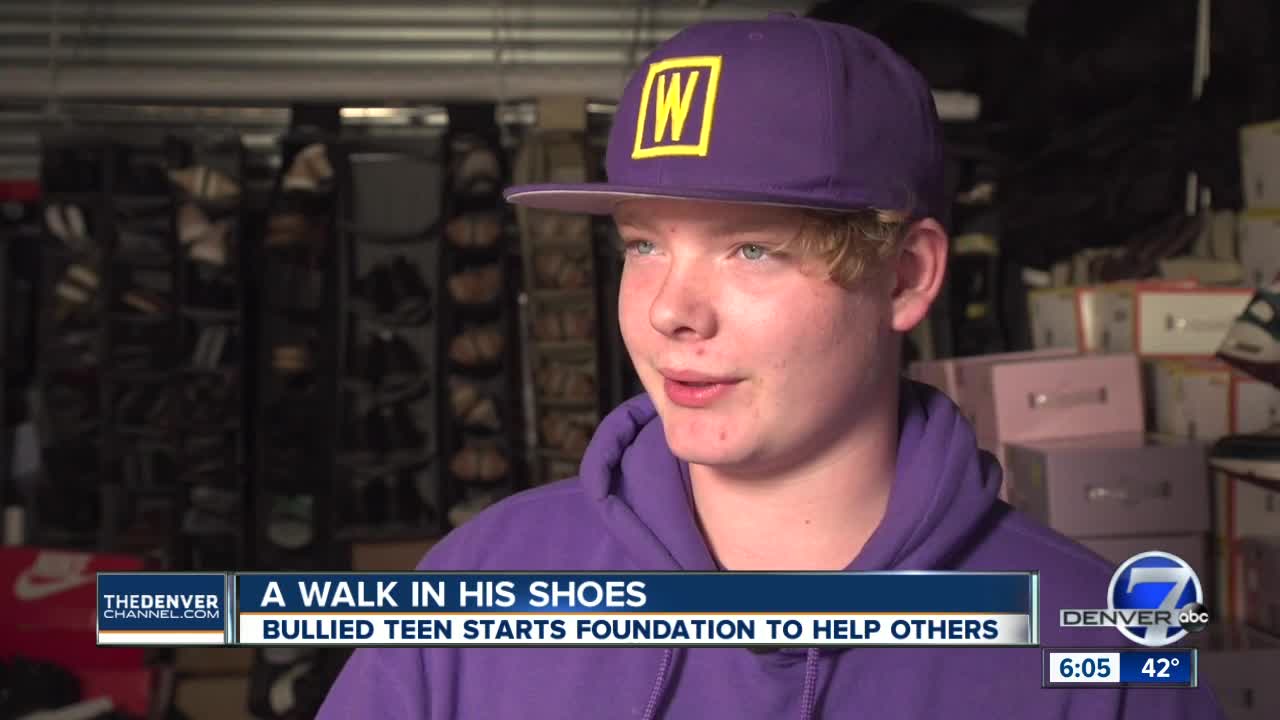 DENVER -- Every day Kyler Nipper, 14, wakes up and looks at his collection of shoes. Rows and rows of shoes, from Uggs to Nikes, he has shoes stacked to the ceiling inside a Nevada storage unit.

"We've given away over 28,000 pairs of shoes," Nipper said. "We accept used shoes, new shoes, any shoes you have in your closet."

Kyler is giving shoes away to kids like him who couldn't afford the coolest shoes.

"All the kids in school had Jordan's, Adidas, New Balances, Pumas and I always wanted them," he said. "I'm stopping what happened to me from happening to anybody else."

What happened to Kyler almost killed him.

"On October 7 when I received that phone call, that was one of the hardest moments of my life. I felt like I couldn't get to him quick enough," said Kyler's mom, Sherise Nipper.

A bully had just stabbed her son in the chest with a sharp pencil at Carmel Middle School in Colorado Springs.

"I felt like I had failed him as a parent, and all I did was send him to school," she said.

Kyler was 11-years-old, he walked a little differently than most of the other sixth graders and didn't have the coolest shoes.

"As a parent, shoes are very expensive to afford," said Sherise.

"Walmart was my place to go shop for shoes all the time," he said.

Eventually, Kyler had to trade his shoes for casts to fix a walking disability.

"I was being bullied in my school and I was eventually stabbed in the chest over my shoes," he said.

The Nipper family is now trying to hold the school district accountable for not doing enough to prevent what happened to Kyler.

"I definitely think they could have done more to prevent this," said Debbie Taussig, a Boulder attorney representing the family. "These schools and where Kyler went to school, I think they should be held accountable."

Taussig is taking their fight to federal court where the family filed a civil rights compliant against the Harrison School District.

The suit claims, "no one at the school ... took any action to prevent bullying." Despite Kyler's parents, "repeatedly reporting the bullying to school authorities."

Kyler's stabbing came after he endured more than a year of physical and verbal abuse, according to the complaint.

"He had kids kicking him and pushing him over, even when he was wearing his casts," she said.

In the two months leading up to the stabbing in October 2016, records show Kyler's parents called the school 15 times to report the bullying. Only making matters worse, after Kyler was attacked, the school failed to call police or send help.

"We drove him to the hospital from the school. So, the school never called an ambulance," his mom explained.

The pencil went through Kyler's chest and punctured his right lung, requiring emergency surgery and a breathing tube for three days.

Nonprofit "Kyler's Kicks" is taking off

Three years since the attack, Kyler's physical wounds have healed but he's still grappling with PTSD.

"He wakes up about every two hours, all night long, whimpering, crying, flashbacks still even to this day, three years later," Sherise said.

But with each shoe he gives out, Kyler's mom said he is slowly healing.

"He's like Popeye, the shoes are his spinach. They help him to go and do bigger things," she said.

"Recently we figured out that all you have to do is give away shoes," said Kyler.

His family recently moved to Nevada where his nonprofit, Kyler's Kicks, is taking off.

"We lost a piece of Kyler the day he was stabbed, but he grew into something more beautiful," his mom said.

While the Nipper family is choosing kindness over hate, what they don't want lost is the need for schools to take bullying seriously before it's too late for someone else.

The case is set to go to trial in Denver Federal Court next April.

Kyler's family is seeking money to pay for overwhelming medical bills that forced them into homelessness as a result of the stabbing. They also want to see changes to how the district handles bullying.

The Harrison School District had no comment about the pending lawsuit.