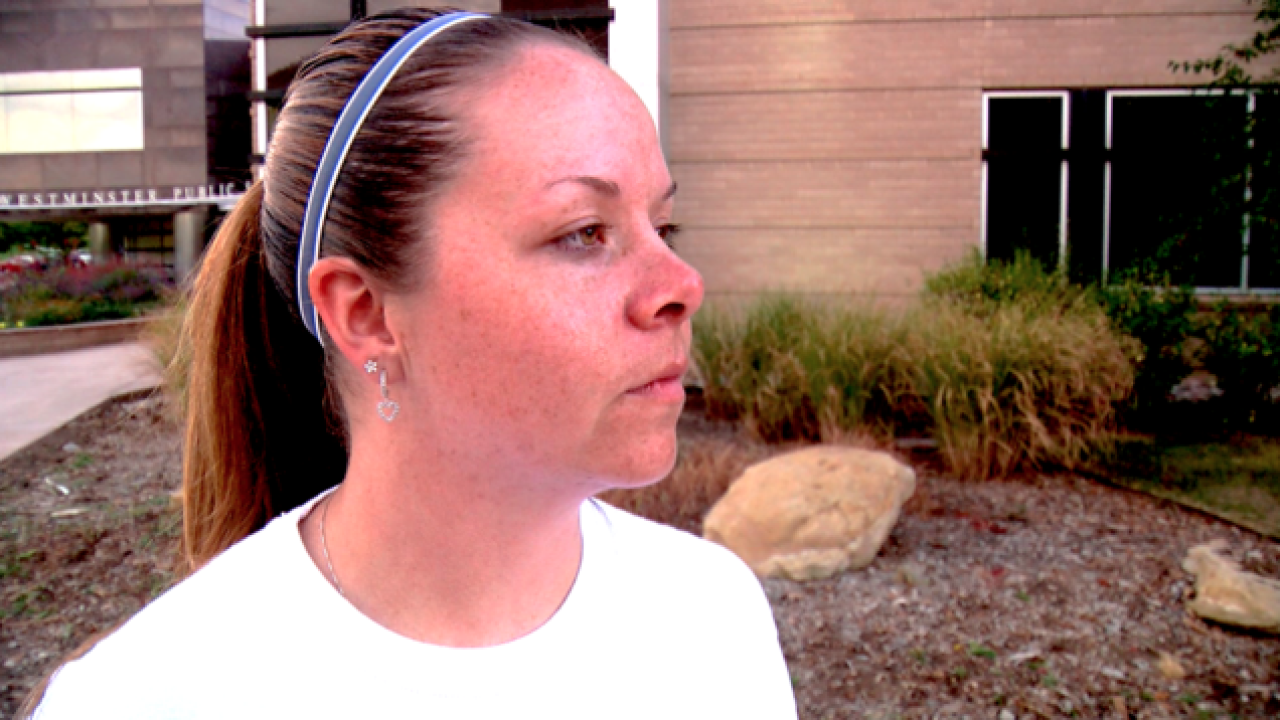 WESTMINSTER, Colo. -- A state subcommittee found the Westminster Police Department did not comply with Colorado’s Victim Rights Act when officers failed to seek charges against a domestic violence suspect.

The state report, uncovered in a public records request by Denver7 Investigates, says police made an “inappropriate and untimely offer” of movie tickets to the victim after telling her no charges would be filed because of a paperwork error.

Elizabeth Steadman tells Denver7 Investigates she walked into the Westminster Police Department in 2012 to report a series of violent attacks by her ex.

A Westminster police report shows officers asked Steadman to call her accused attacker, with the police listening, to see if she would admit to the abuse. The report quotes parts of the conversation, such as:

Steadman: You had your aunt’s gun and you pointed it at me and said, “I have the ability to use this against you.”

Suspect: Ok, well.. what do you want?

Steadman: Are you accountable for the things that you did?

Steadman: Did I do something to deserve to have my life threatened?

Suspect: We’re not together, it’s done and over with … move on… simple as that.

In the report, a Westminster detective wrote, “I completed an arrest warrant affidavit for felony menacing, third-degree assault, and harassment…and forwarded it to the Adams County DA’s Office for review.”

“He warned me that it would be an intense trial. I'd have to face the perpetrator again…I said I'm willing to do that. I want to do that. I need to find justice in this case,” Steadman said. “He said that I would be contacted when the trial date would start, when the trial process would begin, and I never heard back.”

Steadman tells Denver7 Investigates she checked in regularly with the detective handling the case until he told her he would contact her when the district attorney made a decision. But state documents show a police supervisor mistakenly closed the case instead.

Westminster police did not discover the mistake until 2015 when Steadman reached out again for an update on her case.  At that point, the statute of limitations had expired so police told Steadman that charges will never be filed.

“He said, ‘You know what, I dropped the ball in this case. I let it fall through the cracks,’” Steadman said.

About six weeks after a detective told Steadman by phone her case could not be prosecuted, police officials met with her in person to explain what went wrong with the case.

“I felt like I was being blamed in that meeting,” Steadman told Denver7 Investigates.

Steadman says during the meeting, police officials asked her why she waited so long to ask for an update on her case. (Police denied making those statements, according to state records.) State documents do show police admitted to discussing challenges in the case that may have ultimately prevented prosecution. Steadman felt those “challenges” were irrelevant considering police mistakes prevented her case from ever going to trial.

Steadman says she left the meeting frustrated but what happened in the parking lot during an encounter with a commander left her infuriated and insulted.

“As I was walking out in tears in frustration, he said, ‘You deserve a day to yourself. Here's a pair of movie tickets,’” Steadman told Denver7 Investigates.

“They don't file felony charges; they admit they dropped the ball. And they hand you a couple of movie tickets?” asked Denver7 chief investigative reporter Tony Kovaleski.

“Two individual tickets to go see a movie, and I filed those tickets away, and it felt like a slap in my face,” she said. “He might have thought he was doing good but he does not understand how insulting it was.”

Amy Miller, executive director of the Colorado Coalition Against Domestic Violence, also called the offer of movie tickets an insult.

“When you weigh movie tickets with somebody not being treated with fairness, dignity, and respect as a victim of any crime or a victim of domestic violence, it just doesn't compare,” she said. “Somebody could have lost their life.”

That law is intended to protect the victims of certain crimes through the criminal justice process by requiring law enforcement, prosecutors and courts to communicate with victims about the process, notify them of their rights, and treat them with respect.

Victims who feel their rights have been violated can file a complaint with the state. Complaints are reviewed by the Victim Rights Act subcommittee.

In January, the VRA subcommittee reviewed Steadman’s complaint and found some of the department’s actions to be “egregious.”

“The Westminster Police Department made a commitment to a victim that they failed to keep and this failure is a violation of the victim’s right to fairness, respect and dignity,” the subcommittee wrote.

The subcommittee wrote that it “could not understand why members of the Police Department would discuss with Ms. Steadman the merits of her case, or lack thereof, after it had already been determined that the case could not proceed … Although unintentional, discussing the problems of the case was an unnecessary diversion to the real issue of the meeting.”

And when it came to the movie tickets, the subcommittee wrote it “appreciated their positive intention. However, in this case the timing of the gift was inappropriate and the offer appeared to be insensitive to Ms. Steadman’s situation at that particular moment.”

Amy Miller, executive director of the Colorado Coalition Against Domestic Violence, reviewed the VRA subcommittee’s findings and told Denver7 Investigates she agrees with them.

“I'm glad that we have a Victims Rights Act in the state of Colorado that says that victims of crime deserve to be treated with fairness and dignity and respect, that they deserve the same rights in the criminal justice system that defendants and suspects have,” Miller said.

Denver7 Investigates reached out to Steadman after reading the VRA subcommittee’s findings and she agreed to tell her story.

“Honestly the department made me feel after that meeting … like I did something wrong, that I was to blame for this being let go,” she said. “Once you guys reached out, I was like wow. This is not something little or to be brushed off like it has been.”

Denver7 made repeated requests to interview Westminster police chief Tim Carlson to discuss what happened and why in Steadman’s case. Through a department spokesperson, the chief declined an on-camera interview, asking instead that the station send a list of questions about the situation.

“What does this say when a police chief of a department the size of Westminster doesn't want to answer questions, doesn't want to explain what happened in your situation?” Kovaleski asked Steadman.

“They can't own up to what they're not doing. They're not serving the community like they say they're going to and like they should be,” she responded.

“If you feel that something rises to a certain level of seriousness, then you're going to be accountable for that action. Because ultimately the actions of that police department lie at the feet of the chief,” Miller said.

The VRA subcommittee’s records say Westminster police did reprimand the officers involved in the mistakes that led to the lack of prosecution in the case.

The VRA subcommittee required all Westminster police staff to “receive training offered by the [Department of Criminal Justice] or the Ending Violence Against Women Project at the Colorado District Attorney’s Council on Victim Empathy.” Westminster police provided records showing it complied with the requirement.