Dying for Help: A Mental Health Crisis in Clear View

Copyright 2019 Scripps Media, Inc. All rights reserved. This material may not be published, broadcast, rewritten, or redistributed.
Chad Skinner/Denver7
After months of investigating by the Contact7 Investigates team and multiple state and federal agencies, the state of Colorado has moved to revoke the psychiatric hospital license for Clear View Behavioral Health in Johnstown, Colo. Contact7 Investigates has compiled more than seven months of into a 30-minute special: “Dying for Help: A Mental Health Crisis in Clear View.” 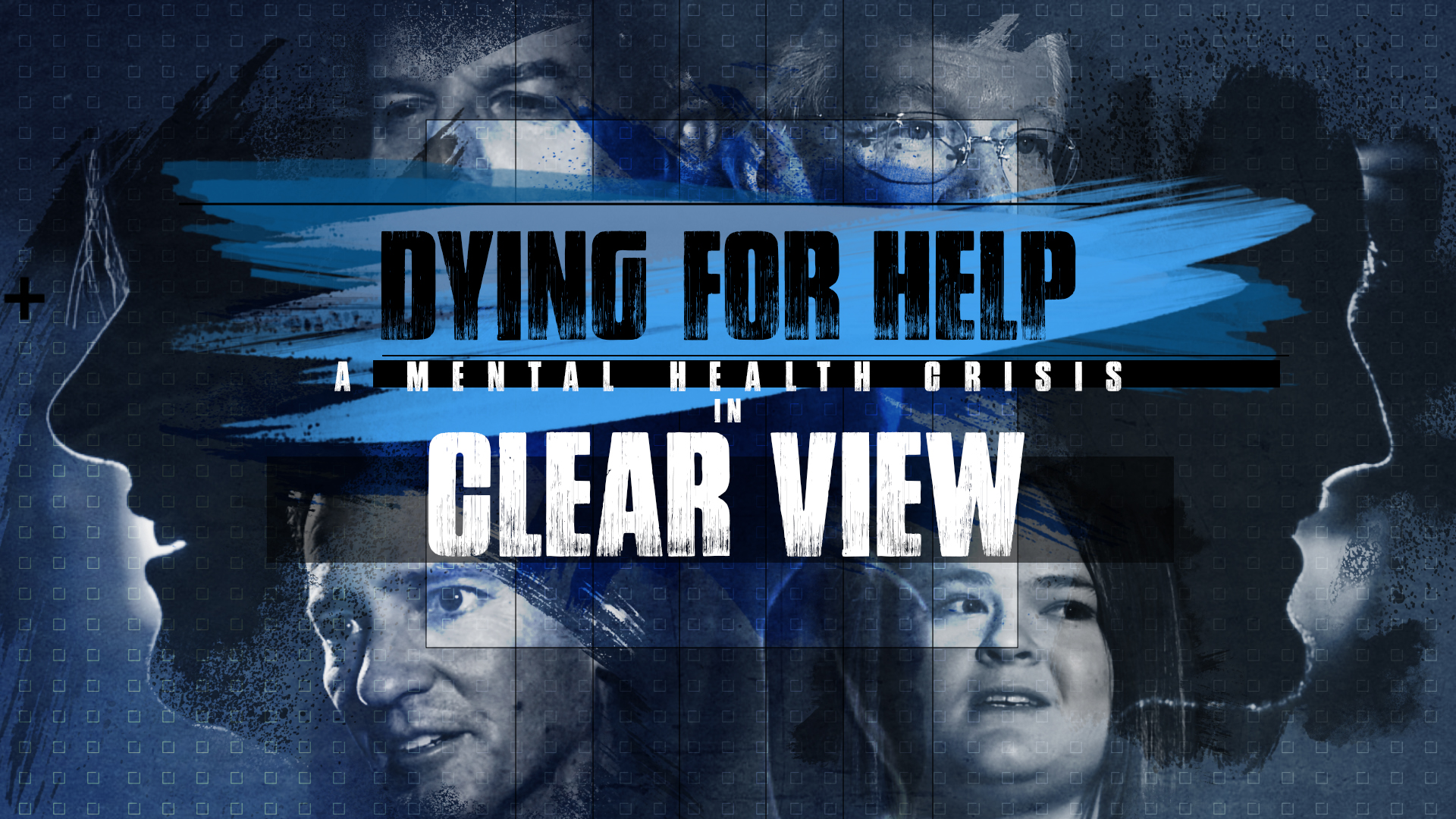 DENVER – After months of investigating by the Contact7 Investigates team and multiple state and federal agencies, the state of Colorado has moved to revoke the psychiatric hospital license for Clear View Behavioral Health in Johnstown, Colo.

The state outlined findings from its Department of Public Health and Environment and federal investigators in a 32-page revocation notice sent to the mental health facility and its administrators in late June. The 92-bed facility about an hour north of Denver will have 30 days from June 24 to respond.

Contact7 Investigates has compiled more than seven months of reporting – which included interviews and discussions with more than five-dozen current and former patients, their family members and employees, along with state of Colorado officials and investigators – into a 30-minute special: “Dying for Help: A Mental Health Crisis in Clear View.” (You can watch the special in the player above.)

The piece goes into depth on the allegations of unsafe facilities, questionable intake and discharge practices, insurance and billing questions, and patient deaths that the family members and staffers – both current and former – have made to Contact7 Investigates and state and federal investigators.

Many of the facility’s administrators have stepped down and been replaced since Contact7 Investigates first started reporting on the facility.

Facility brass and administrators from Clear View’s parent company, Strategic Behavioral Health, respond in the special to the allegations and discuss what steps they say they are taking to improve the facility and its standing with the state.

The Contact7 Investigates probe started in December with two families, who claimed their family members had been held for the purpose of insurance money without receiving proper medical attention. In the initial January report, several current and former employees raised concerns about “inadequate” patient care and staffing issues contributing to what they said was a dangerous working and patient environment.

By Feb. 1, the state had downgraded the facility’s license to a conditional license, and four state and federal agencies were investigating the claims made by the patients, their families and employees current and former. The downgrading of the license came after multiple unannounced visits to the facility by the agencies and a 173-page report.

The conditional license meant that the facility had to improve its care, better-train its staff and determine its proper staffing levels, and to also correct some of the issues investigators had found there.

The report concluded that patients received care in an unsafe and unsanitary environment. The deficiency findings led the state to issue two separate “immediate jeopardy” designations to Clear View – the most serious label regulators can hand out.

At the time, then-Clear View CEO Rick Harding sent a 10-paragraph response to Contact7 Investigates’ report on the conditional license, saying that Clear View was “committed to providing safe, high-quality care … while working collaboratively with regulators to ensure we comply with all laws and regulations.”

But the allegations about poor working and patient conditions continued, with one former facility nurse saying: “It’s all about the money, and it’s fraud and it’s not patient care.”

The former President and CEO of Mental Health Colorado and now-Senate candidate, Andrew Romanoff, said the allegations outlined in the reporting and investigations amounted to “a matter of life and death.”

In early March, the allegations of improper billing and care from families of former patients continued. One woman said she was charged for three days of care for her 13-year-old daughter who was feeling suicidal but reported her daughter saying she had seen a doctor for less than 10 minutes total.

A former facility administrator said she had seen several patients be held for longer than necessary during her time there, and a former therapist said management asked her to lie in order to keep patients longer.

Many of the current and former patients and employees agreed to speak on the record with Contact7 Investigates only on the condition they remain anonymous out of fear of retaliation.

By mid-March, Harding, Clear View’s CEO, had resigned along with at least five others from the facility’s senior management team – including the chief operating officer, chief financial officer, director of business development and two other senior managers.

A week later, Contact7 Investigates told the story of a woman who alleged that $400 of her 70-year-old father’s cash had gone missing from his valuables after he was admitted to Clear View. A former therapist and a former administrator confirmed they had heard of several other complaints that valuables would go missing during patients’ stays. The former administrator says they reported it was happening but that “nothing was ever done.”

Clear View at the time declined requests for an interview but its new CEO, Dan Zarecky, sent a statement saying the facility had “rigorous procedures in place to register and secure belongings when patients are admitted.”

The investigations by the state and federal agencies continued, as did Contact7’s reporting.

In early May, we highlighted the death of 47-year-old Tibor Hetei, who died hours after he was given a powerful B-52 tranquilizer. Larimer County Coroner Dr. James Wilkerson said there was reason to believe the cocktail contributed to Hetei’s death: “That cocktail is intended as a tranquilizer for somebody who is very agitated and confrontational. Those situations did not exist. He was not agitated, and he wasn’t confrontational.”

Dr. Wilkerson said that Clear View gave his office “inaccurate and misleading information in the initial investigation” and said facility staff members failed to monitor Hetei’s condition every 15 minutes as had been required at the time.

Additionally, the Colorado Department of Public Health and Environment confirmed shortly after the story about Hetei’s death was published that his death had sparked the initial investigation into the facility. The CDPHE also confirmed that the Centers for Medicare and Medicaid Services had placed Clear View on a 90-day termination track to remove its certification.

Two weeks later, Colorado Attorney General Phil Weiser confirmed the state, along with Larimer County prosecutors, were conducting a criminal investigation into Hetei’s death and claims of insurance fraud. Contact7 Investigators also obtained a state report that followed some of the visits made to the facility by investigators and outlined significant mistakes and oversights at the facility.

“The facility failed to provide care in a safe setting for all patients admitted to the facility. Specifically, the facility failed to ensure patients did not have access to contraband; failed to increase levels of observation after suicide attempts; failed to monitor patients who required increased observation; failed to discharge patients in a safe manner; and admitted patients with unstable medical conditions who met exclusionary criteria,” the report stated. “These failures resulted in negative patient outcomes and potentially contributed to a patient's death. Additionally, these failures resulted in patients having access to heroin.”

The report also outlined another death at the facility involving a patient with a kidney condition who received a medication with side effects that could have contributed to his death, the state wrote.

And a former mental health technician at the facility discussed with Contact7 Investigates another death that he witnessed, which he said was “highly preventable.”

Clear View again declined to be interviewed and released a written statement that said, in part: “We want to assure our community and the providers who refer patients to us that these problems are behind us.”

"We appreciate that the people are coming forward. They deserve to be heard. We are doing our best to not let this sort of thing happen again," he said.

Following Contact7’s first report on Hetei’s death in May, attorneys hired by Clear View sent a letter demanding all stories be removed from our website, that the raw interviews be published, and concluded: “Lastly we encourage you to review the above-reference Story (and others that aired previously) and take whatever other action you deem appropriate to address Mr. Kovaleski’s unethical, inaccurate and unbalanced reporting.”

Denver7’s lead attorney declined to adhere to the demands made by Clear View’s attorneys and responded, in part: “The Station’s reporting on Clear View is true, substantially true and is supported by extensive investigative records.”

The report issued mid-May proved to be consequential to the late-June news that the state had moved to revoke Clear View’s license.

In the notice to Clear View, the state said that Clear View has been “unable to sustain compliance with state licensing and/or federal certification requirements” and has been cited by CDPHE for 85 deficiencies. The notice also says that the facility “has been out of compliance for eleven (11) months” and that administrators “have failed to demonstrate evidence that the Facility’s compliance is improving.”

The state wrote that investigators made another unannounced visit the last week of May and found the facility “had not achieved compliance” with the terms of the conditional license – noting that Clear View failed to track contraband properly and did not properly care for those under observation for suicide attempts, among other things.

The notice also said that the facility broke its own rules, along with the state's, for how it accepted and admitted patients based in its own ability to meet those patients' needs, including some of the instances previously cited in earlier reports.

Clear View’s latest CEO, Sharon Pendlebury, said the facility was “disappointed” by the notice and said it was working with the state.

"The Health Department approved our improvement plan and we have been working collaboratively with them as we have implemented it,” Pendlebury wrote. “We were disappointed by the notice we received yesterday, and are in communication with Health Department to determine how we can address their concerns so that Clear View can continue its vital role of providing much-needed behavioral health treatment to the people of our region.”

Clear View Behavioral Health and the other respondents to the notice have until late July to respond to the license revocation notice from the state.

The investigations by state and federal agencies – and the Contact7 Investigates team – continue.

If you have a tip for Contact7 Chief Investigative Reporter Tony Kovaleski Call him at (303) 832-0172 or email him at tony@thedenverchannel.com