DENVER — Drive through the gates of the Village at Castle Pines and it’s easy to see why so many families and retirees feel they’ve found their paradise here. It’s a gated, Front Range golf club community with every amenity imaginable.

“We’ve been here for 20 years and we love it,” said homeowner Jerry Schofield. “And we are trying to preserve it for those who come after us.”

One of the amenities you’ll hear Schofield and others here brag about is the water – pristine, crystal clear, drawn from the aquifer running hundreds of feet below the village, and a precious resource that water managers here say must be conserved to ensure the future of Castle Pines.

So, it made little sense to Schofield and other neighbors here that for months, huge water tankers were pumping out that precious resource from a village hydrant on Happy Canyon Road six days a week – with each truck making up to 10 trips a day for four months.

“It became obvious that something wasn’t right with the process,” Schofield said. “And things were happening that I felt were very detrimental to the community.”

For months, Castle Pines Metropolitan District Manager Jeff Coufal told his board, the village homeowner’s association and the residents the water was going to Franktown to cover their water demands while a new municipal well was being dug. Castle Pines, the homeowners thought, was just being a good neighbor.

But Schofield wasn’t convinced. After all, Franktown doesn’t have a municipal government. Franktown’s fewer-than-300 homes are all on private wells and private septic systems.

So, he followed those water tankers for nearly 20 miles. They were not going to Franktown after all.

The water was actually being used for dust control and soil compacting at a massive construction site in Elbert County. By the time Schofield took a photograph of the meter back on Happy Canyon Road, more than 7 million gallons were gone. 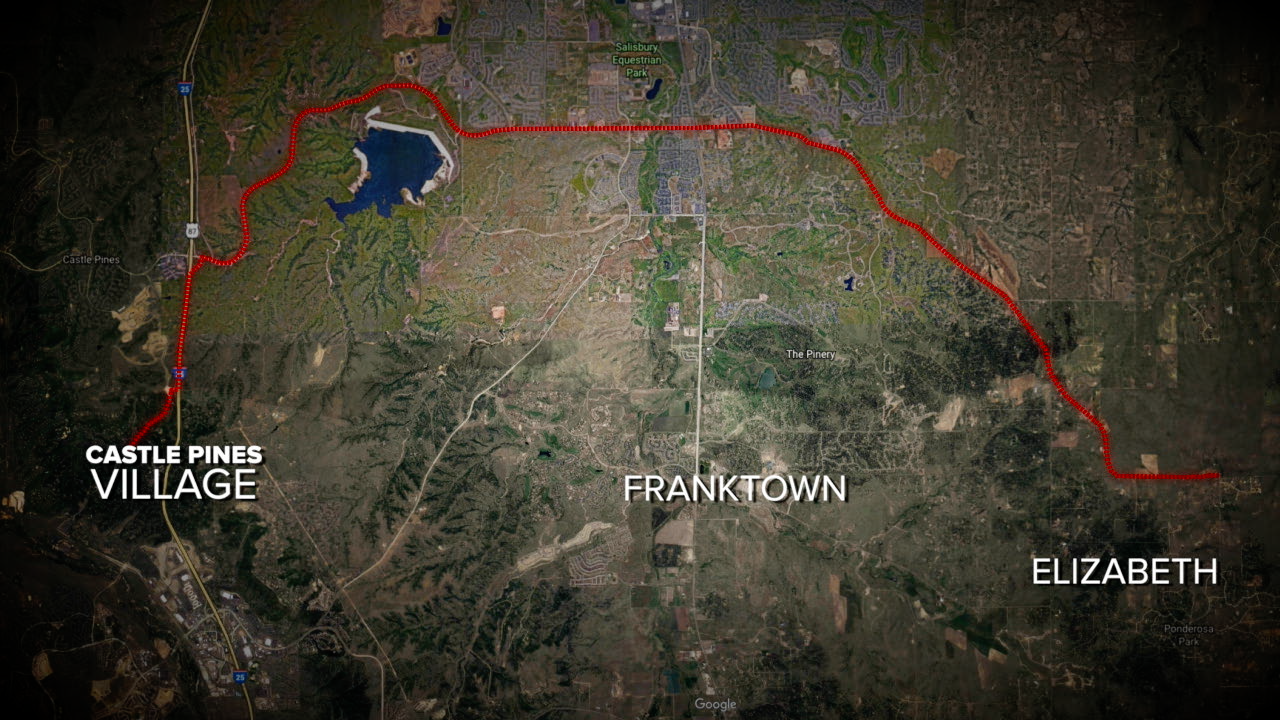 “I was mad. Understatement of the day,” Jerry told Contact7 Investigates.

Fellow homeowner Tad Waldon was on the same page.

“This is a wasteful decision by any stretch of the imagination,” Waldon said. “Whoever made the decision needs to be held accountable.”

But the district board’s president and chairman, Richard Munday, did.

“I still believe he had wrong information when he agreed to sell this water,” Munday insisted.

Asked if he would call what happened a mistake, Munday told Contact7 Investigates that it was “absolutely a mistake.”

It’s a mistake Munday says would never have been made if the board had known what the water was being used for.

“We would never do this if [Coufal] came to us and said, ‘Hey, we want to help a developer to build a development in Elbert County,’” Munday reiterated.

But after reviewing the board minutes from last September, Contact7 Investigates discovered that manager did tell the board. Munday even asked Coufal for how long the construction company would be drawing the water.

Those minutes read: “Mr. Coufal reported that Elbert County, east of Parker is drilling a new well and cannot keep up with the current water demands. In the interim, they are buying water from the District.

The water trucks are filling up from a hydrant on Happy Canyon Road. Director Munday asked how long this will take, and Mr. Coufal said it will be several months.” September 26, 2018.

Munday claimed he had no recollection of that information coming out back in September, saying just the idea that water was being sold to a construction company in Elbert County would have raised a red flag for the board.

But after taking the time to review those minutes himself, Chairman Munday’s tone quickly changed.

We asked again whether or not the board’s district manager had made a mistake. This time, Chairman Munday’s answer was very different.

“No, he did not, retrospectively,” Munday said.

He went on to explain that selling 7 million gallons of fresh water to a construction company outside the district and outside the county was perfectly fine under the old rules. However, since that sale, the rules have changed.

Suddenly, the reporting on the sale of millions of gallons of water and of the water manager’s less-than-truthful description of that sale to village residents became the problem for the Metro District chairman, Munday.

“Look at what you guys have done here,” Munday said angrily. “You’ve made this into a federal case. We are embarrassed by that. We don’t like it and so it causes us to go back and say, ‘Did something wrong happen here?’”

Talk to those who pay for the water and they’ll tell you there’s no question someone messed up. And according to Tad Waldon and Schofield, someone tried to cover it up.

“You have a group or individual – that’s unclear – that has made a decision for $53,000 to allow a developer in another county to bring in semi-trucks to syphon off more than 7 million gallons of water – pure clean drinking water,” Tad Waldon said. “Yet at the same time, the same entity that’s approving that and allowing that to happen – the governing body – is asking the residents that pay for the water, that support the board, that elect the members, to conserve that same water.”

“I’ve asked myself 20 times,” said Schofield. “What am I missing here? And believe me, there’s nothing missing. It’s just sad that this water has been depleted and there’s nothing we can do about it. It’s gone. And when it’s gone, it’s gone.”

The real question for these homeowners is simple: Was the Metro Board’s actions, and the water manager’s misleading statements to the board, HOA and homeowners intentional? Or as Munday says, was it a total lack of communication?

Richard Munday says the board will now publish an apology in the local newsletter.