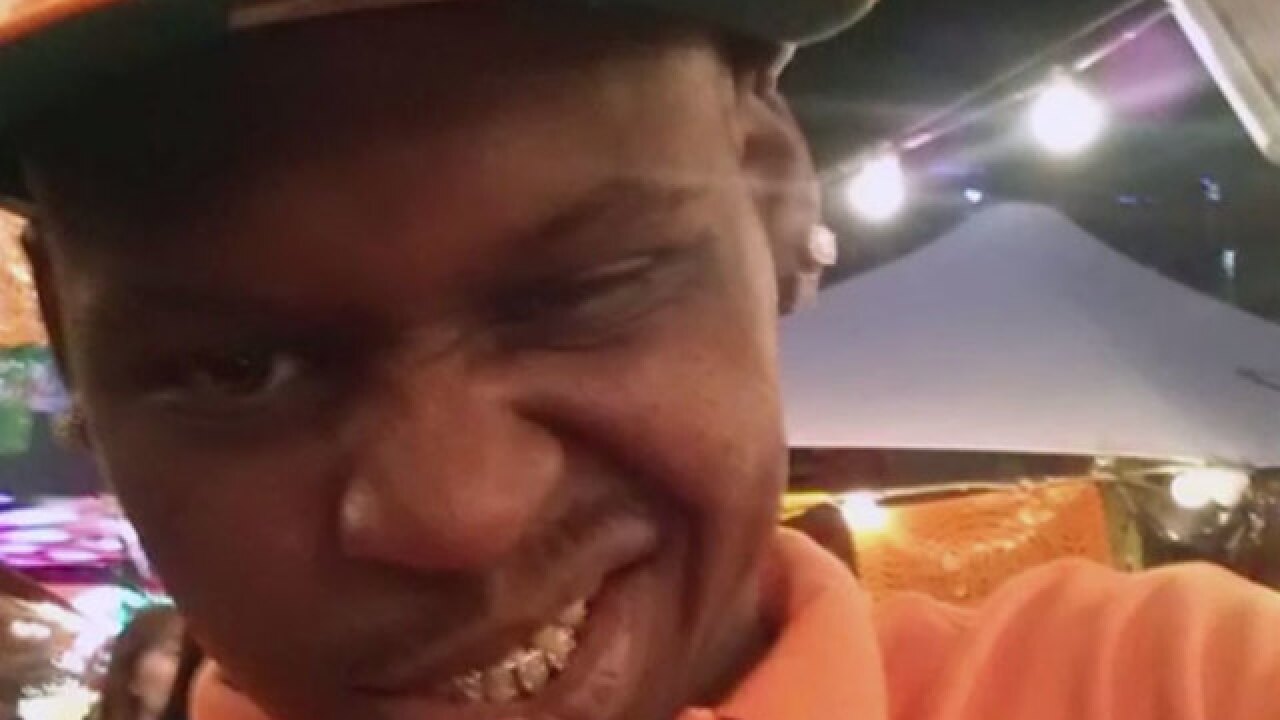 Courtesy Ben Stewart
<p>James Edward Strong Jr. was shot to death in a police shootout during a drug raid at his Northglenn home in 2015.  </p>

NORTHGLENN, Colo. -- A federal lawsuit has been filed against the Northglenn, Thornton and Westminster police departments in a 2015 drug raid shootout that left a 32-year-old suspect dead and a Northglenn officer wounded.

The lawsuit and law enforcement documents highlight the conflicting accounts of what happened on the morning of May 28, 2015 when officers shot James Edward Strong Jr. 22 times – according to a family attorney -- while his wife and two young children were in the Northglenn home.

Northglenn Officer Nicholas Wilson was shot in the arm and the thigh and his armored vest stopped a third bullet.

Ben Stewart, the Strong family’s attorney, said that during the drug raid, SWAT officers were “shooting blindly through bedroom walls” and floors, sending bullets into bedrooms where Strong’s wife and the couple’s 14-year-old son were. Neither the children, nor their mother were injured.

The lawsuit claims police used excessive force, shooting Strong in the head at close range after he’d collapsed in a “fetal position” on the floor and jeopardizing and traumatizing his wife and children and two visitors in the home.

However, Adams County District Attorney Dave Young’s review of the deadly shooting concluded that the evidence did not support filing criminal charges against the two officers who shot Strong, because they acted in self-defense, fearing for their life and the life of fellow officers.

The North Metro Drug Task Force, which is comprised of officers from local police departments, had begun an undercover investigation of Strong about a month before the shooting.

A confidential informant had told task force investigators that Strong was selling cocaine from his home at 10909 E. 109th Place in Northglenn.

According to the district attorney’s shooting review report, the informant arranged to have an unnamed individual buy cocaine from Strong and deliver it to the informant. In May, the informant conducted two cocaine purchases from Strong that were monitored by narcotics investigators.

But Stewart, the family’s attorney, said investigators did not frisk the informant to make sure he didn’t have drugs on him before he did the alleged drug transaction with Strong. This is a standard police practice to ensure the informant could only have received the drugs from Strong.

The district attorney’s report said the informant received several grams of cocaine from Strong during the two undercover deals.

Yet, the lawsuit says that, during the ill-fated raid, no drugs were found in Strong’s home.

Investigators found evidence that Strong was a convicted felon who had a “violent gang affiliation and access to multiple firearms,” the district attorney’s report said. Police said Strong also had criminal history for possession of a controlled substance, aggravated assault, forgery and identity theft.

Armed with this information that Strong might be dangerous, the drug task force obtained a “no-knock” warrant that allowed SWAT officers to burst into Strong’s home without knocking on the door.

Stewart acknowledged that Strong had trouble with the law as a young man in Tennessee, where Denver7 found he had convictions for assault and identity theft. But, since moving to Colorado in 2008, Strong had stayed out of trouble, settling down as a family man who worked for a moving company, the family’s attorney said.

Investigators had been conducting surveillance of Strong’s home and noted that the suspect’s wife and children tended to leave the home about 8:30 each morning for school. So, police planned to execute the search warrant at 10 a.m. -- after mother and children were out of the home, according to the district attorney’s report.

Stewart said police missed a key point – the school year had ended a day before the raid. This meant the children would not have left home early for school.

On the morning of the raid, members of the Northglenn-Thornton SWAT Team gathered at a nearby school for a briefing and to rehearse on the operation.

Then they got into an armored vehicle and drove down the street to Strong’s house.

Yet, Strong’s family members and visitors said they never heard the intruders identify themselves as police.

SWAT officers found Strong’s brother and a friend, both visiting from Tennessee, in the living room area and ordered them to get down on the floor.

Then Northglenn Officer Nicholas Wilson and Thornton Detective Jason Schlenker went down a hallway toward bedrooms as they searched for Strong. Both officers were wearing SWAT gear and carrying semi-automatic rifles.

Wilson looked in an open bedroom door, and “saw a little girl on a bed,” the DA’s report said. Schlenker also saw “a child sitting on the bed looking at the officers.”

Wilson turned to the left and saw another bedroom door that was opened about an inch. The officers pushed the door open. It was dimly lit inside. Wilson saw a woman on the far side of the bed. He heard movement behind the door.

Suddenly, Wilson saw a muzzle flash and heard a gunshot. He saw a man who “appeared to be holding a handgun held up,” according to the DA’s report.

The man kept shooting and Wilson felt a burning in his arm, near the elbow. He knew he had been shot. Wilson began firing back at the man. Wilson moved past the open doorway and saw the gunman go to the ground, but the gunman kept shooting. Wilson felt pain in his leg, according to the officer’s account in the district attorney report.

“At that point, Officer Wilson began shooting through the wall from the hallway into the bedroom in the general direction of the male on the ground,” the DA’s report said. Talking later with shooting investigators, “Officer Wilson expressed that he was in fear for his life, the lives of the other officers and the other individuals in the home.”

“Officer Wilson did a quick look into the child’s room and observed the girl stuffing herself between her bed and the wall,” the DA’s report said.

Detective Schlenker came up to the bedroom door and saw a man lying on his back on the floor holding a pistol and firing at Wilson. Schlenker saw Wilson firing through the hallway wall into the bedroom toward the gunman, the DA’s letter said.

Schlenker aimed his rifle at the gunman and “fired until he observed the male go limp and stop shooting,” the DA’s report said.

According to the lawsuit, Lanhisha Richmond, Strong’s common-law wife, “was yelling at the Schlenker to stop shooting as Strong Jr. was in a fetal position on the floor and not resisting.” The lawsuit said Schlenker kept shooting as he walked toward Strong, lying on the floor.

Schlenker estimated that his last shot was about 18 inches to 2 feet away as he fired a shot into the man’s head, the DA’s letter said.

According to a forensic expert hired by the family’s attorney, the final shot was 10 inches from Strong’s head.

“Schlenker’s actions amounted to the execution of Strong,” the lawsuit said.

Schlenker later told shooting-review investigators he “felt he had to kill the male or the male would kill them.”

Strong’s wife later told investigators she and her husband were asleep in their bedroom when they were awakened by a rumbling sound.

According to the lawsuit, “James Strong Jr., upon waking to loud noises coming from down stairs in his home and with his minor child in the next room feared for the safety of his family.”

Strong pulled a handgun from under the mattress and went to the bedroom door, which was opened a crack, his wife later told police.

She said she saw green army fatigues. The door opened wider and “SWAT officers had guns in their faces and started shooting.” She told investigators Strong fell to the ground as the officers continued shooting. She said she didn’t remember Strong firing his handgun.

The lawsuit says Strong was “standing behind the door with the gun pointed upward, to defend his family from whoever was intruding on their home. Once the intruders began to enter his bedroom, James Strong Jr. fired two shots at the intruders, who had not yet identified themselves as law enforcement.”

An autopsy found that Strong had 19 bullet entry wounds, including shots to his face, neck, chest, arms and lower extremities.

“The remains of Strong’s body were described as pulpified in the coroner’s report,” according to the lawsuit.

Stewart said Wilson firing “blindly” through the walls into the bedroom could have struck Strong’s wife. The attorney said that shots Schlenker fired into Strong’s body on the floor went through to the basement and into a couch where the couple’s 14-year-old son was sleeping.

The lawsuit claimed the police departments failed to properly train their officers on how to execute a no-knock search warrant.

Thornton Police Chief Randy Nelson issued this statement on Friday in response to the lawsuit:

"The North Metro Drug Task Force and the cities of Thornton and Northglenn stand by the facts, evidence, and merits of the investigation in the James Strong case. In May 2015, the Northglenn/Thornton SWAT Team carried out a valid and necessary court issued no-knock search warrant. Upon authorized entry into the home SWAT Officers clearly announced their presence, purpose for entry, and instructions to the occupants. SWAT Officers were immediately met with lethal force by James Strong in a back bedroom. A Northglenn SWAT officer was struck and wounded by three rounds fired from James Strong’s weapon. James Strong’s firing of a weapon at officers caused officers to return fire, mortally wounding him. Narcotics evidence and stolen property were obtained from the residence as a result of the search warrant.

"In August 2015, the Adams County (17th Judicial District) Critical Incident Team completed an independent investigation and presented its findings to the Adams County District Attorney whose legal analysis of the officers’ actions during the James Strong case resulted in the conclusion the officer’s use of lethal force was justified."