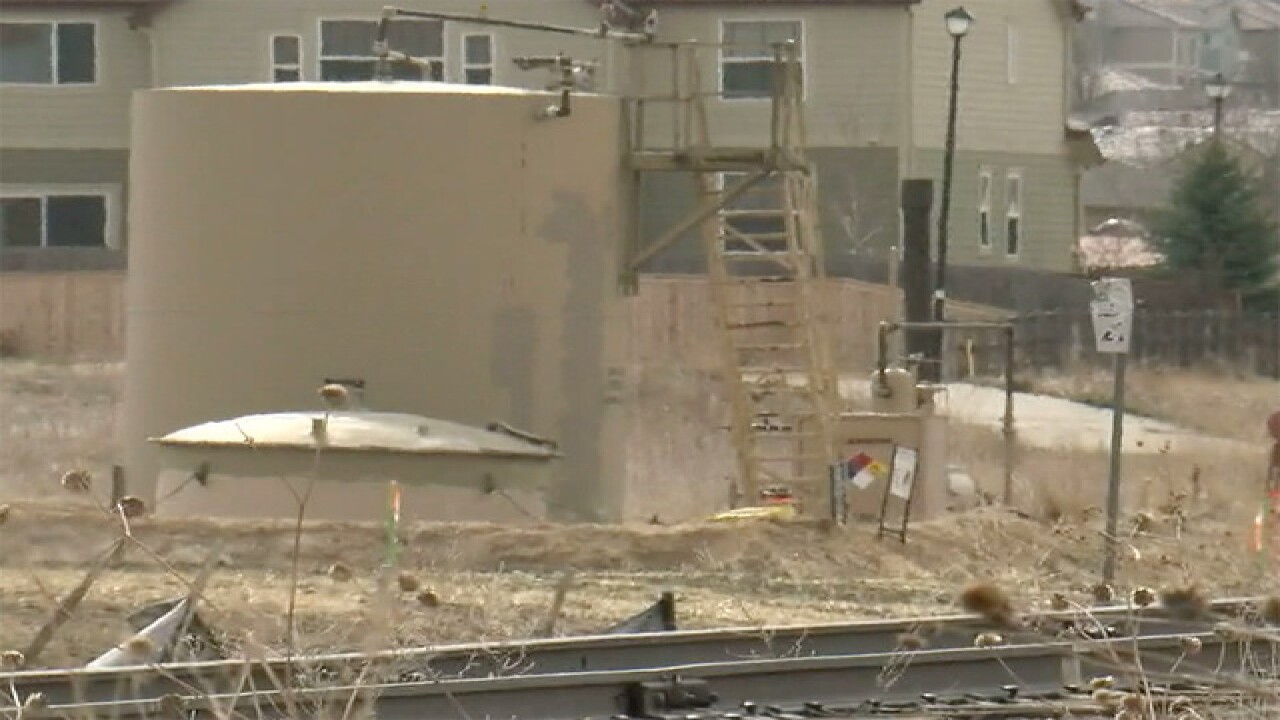 The Colorado Supreme Court has ruled that locals bans and moratoriums on fracking in Longmont and Fort Collins are "invalid and unenforceable."

At issue was whether home-rule cities should be allowed to ban hydraulic fracking in oil and gas operations, and the storage of such waste products.

Longmont created new regulations for fracking and voters added a ban on fracking to the City Charter in 2012.

The Colorado Oil and Gas Association sued over both issues. The regulations issue was dismissed as part of a compromise brokered by Gov. John Hickenlooper before the 2014 election.

However, in 2014, District Court Judge D.D. Mallard ruled that the ban conflicted with existing state law and changing that was up to either the Legislature or a different court. Since then, the fight over the ban has continued to move through the courts.

Fort Collins has a five-year moratorium and that was also part of the issue before the court.

"The supreme court [sic] concludes that Fort Collins’s five-year moratorium on 14 fracking and the storage of waste within the city is a matter of mixed state and local concern and, therefore, is subject to preemption by state law," the judges wrote. "Applying well-established preemption principles, the court further concludes that Fort Collins moratorium operationally conflicts with the effectuation of state law."

"Accordingly, the court holds that the moratorium is preempted by state law and is, therefore, invalid and unenforceable," the judges wrote.

The Colorado Supreme Court ruled it was also affirming the district court’s order enjoining Longmont from enforcing the fracking ban.

"Applying well-established preemption principles, the supreme court [sic] concludes that that the City of Longmont’s ban on fracking and the storage disposal of wastes within its city limits operationally conflicts with with applicable state law," the judges wrote. "Accordingly, the court holds that Longmont’s fracking ban is preempted by state law and, therefore, is invalid and unenforceable."

Colorado has emerged as a leading oil and gas producer with more than 50,000 active oil and gas wells and more than 45,000 inactive wells, according to our partners at The Denver Post.

“We appreciate the Supreme Court's guidance on balancing private property rights and local government jurisdiction of oil and gas operations in Colorado. Striking the right balance is not only important to public health and safety, it has enormous implications for our state's economy.

"Colorado has come a long way on these issues over the last decade. The work of the Task Force amplified the role of local governments in siting large oil and gas facilities and built a stronger connection between state and local regulators. Communities are working more productively with operators, crafting solutions that take into account local concerns while respecting property rights. These steps come on top of several major rulemakings since 2011 that reduce the impacts of oil and gas development on surrounding areas.

"We believe collaboration is better than litigation and careful regulation is better than legislation to strike balance. We'll continue to work creatively and energetically with communities and industry to ensure our world-class environment is protected while remaining a place that is welcoming to business and jobs.”

“It is premature to comment until we have had a chance to review the Supreme Court’s decision carefully and fully evaluate how it affects the City. These issues are complex, and we’ll thoroughly examine the decisions relative to Fort Collins and Longmont. However, it is clear that the Supreme Court has found that the Fort Collins moratorium on hydraulic fracturing is in operational conflict with Colorado law and is therefore preempted.”

“Today’s decision protects private property rights, which are a main driver for the energy renaissance in this country. The U.S. was counted out as an oil and natural gas superpower, but with states like Colorado leading the way, the U.S. defied the odds to become the world’s largest producer of natural gas and a world leader in crude production.

“Energy development has been a driver of economic growth in Colorado. More than a thousand businesses spread across the state are part of the larger oil and natural gas supply chain. Vast supplies of clean, affordable natural gas unleashed by hydraulic fracturing have allowed natural gas to produce much more of American’s electricity.   In other words, were it not for hydraulic fracturing, our carbon emissions would be much higher.

“Effective regulation results when regulators and all stakeholders can work together to ensure safe development. We have that in Colorado. The Colorado Oil and Gas Conservation Commission ensures participation and input from all stakeholders as well as vital scientific data and expertise for safe and responsible development of Colorado’s oil and natural gas resources."

Several groups against the decision, including Food and Water Watch, EarthWorks and Our Health, Our Future, Our Longmont issued a statement saying the "Colorado Supreme Court struck down the rights of Coloradans to protect their health, safety and wellbeing from fracking through the use of local bans."

It went on to say:

The justices denied residents their "right of enjoying and defending their lives and liberties; and of seeking and obtaining their safety and happiness” as outlined in the Colorado Constitution, by determining that oil and gas development is pre-empted by the state. This decision overturns the democratically enacted measure to ban fracking passed overwhelmingly by Longmont residents in 2012 and strips all Coloradans of their Constitutional right to say “no” to fracking in their communities in order to prevent problems inherent in fracking, including air pollution, health complications, water contamination and reduced property values.

"It is beyond comprehension that the Colorado Supreme Court still fails to recognize the rights of people to live in a safe and healthy environment," said Kaye Fissinger, President of Our Health, Our Future, Our Longmont. "The state has declared that fostering oil and gas development is in its interest. That the court apparently equates a government interest superior to human rights is a severe slap in the face. Our country's founding fathers are most certainly turning over in their graves," Fissinger said.

In 2012, residents in Longmont passed a city charter amendment, Measure 300, which banned fracking and the disposal of its waste products, including injection wells within city limits, to protect homes, schools and public parks. The local ban passed with an overwhelming 60 percent majority despite being outspent 30-1 by the oil and gas industry. Governor Hickenlooper and the oil and gas industry sued Longmont over this democratically enacted measure.

“Today’s decision deals a devastating blow not just to Longmont residents, but to all Coloradans who have been stripped of a democratic process that should allow us the right to protect our health, safety and property from the impacts of this dangerous industrial activity,” said Lauren Petrie, Rocky Mountain Region Director of Food & Water Watch.

“Straight out of Orwell’s Animal Farm, the Colorado Supreme Court just decided that the oil and gas industry is ‘more equal’ than other industries,” said Earthworks energy program director Bruce Baizel. “Turning democracy on its head, today’s ruling prohibits local communities from deciding whether and how to balance their health against the fracking industry’s profits.”

Physicians, Scientists & Engineers for Healthy Energy conducted an analysis of peer-reviewed studies on the impacts of fracking and shale gas development. It found that 21 of 25 papers published on the health impacts show potential risks or actual adverse outcomes, including increased incidence of cancer and birth defects associated with living in close proximity to oil and gas wells. The group’s survey also showed that 33 of 48 water quality studies find either the potential for, a positive association with, or direct evidence of water contamination. In addition, 30 of 34 focused on air quality found elevated levels of air pollution, and that children are especially vulnerable to exposure to such pollution, according to the scientists.

As these inherent harms of fracking become ever-clearer, Governor Hickenlooper’s failed task force—formed in 2014 as a way to keep several anti-fracking measures off the ballot—has left municipalities frustrated as proposals to drill continue to encroach closer to homes and schools. In Adams County, a recent proposal to drill several new mega-facilities could place fracking wells within 100 feet from homes and a middle school. The Governor’s task force has failed to provide Coloradans with a way to protect their homes, families and futures from this dangerous, industrial activity.

“As a retired RN I am horrified that we continue to allow this toxic industry to operate next to our homes and schools,” said Karen Dike, of Rocky Mountain Chapter of Sierra Club. “The Colorado Supreme Court ruling discounts the inherent rights of the people of this state to have clean air to breath, fresh water to drink, land free of contamination and safe places to live, go to school and work. The ruling places profit of corporations before people and will allow the continuing toxic onslaught of this dangerous industry.”

"Today’s Colorado Supreme Court decision is an enormous win for individual property rights and responsible resource development in Colorado,” said Colorado GOP Chairman Steve House. “The over 1000 Colorado businesses connected to our energy industry are vital to our economy and our local communities. It is outrageous certain far-left extremists continue to peddle baseless pseudoscience to directly attack the livelihoods of middle class Coloradans.

“Low cost and cleaner burning natural gas derived from hydraulic fracturing presents Colorado with an incredible economic opportunity. We are pleased the Colorado Supreme Court has affirmed the appropriate role stakeholders and regulators at the Colorado Oil and Gas Conservation Commission should play in ensuring environmentally responsible resource development.”

Michael Freeman, staff attorney for the Rocky Mountain office of Earthjustice who filed a friend of the court brief representing Conservation Colorado on the Fort Collins case, said the ruling likely would increase the pressure across the state to change the law.

“We’re still reviewing them, but we're disappointed by the decisions. Fort Collins and Longmont lie right on the edge of some of the most heavily-fracked areas of Colorado, where drill rigs have gone up next to elementary schools and in the middle of residential neighborhoods. These two cities have seen the oil and gas industry routinely contaminate rivers, streams and land in nearby areas with spills of toxic fracking wastes.

“Local governments should be able to use their authority to ensure that fracking doesn’t cause the pollution, 24-hour noise and semi-truck traffic that have occurred in numerous Colorado communities.

“These rulings are not the end of the story, however. Communities will now find other ways of protecting their citizens from fracking, and the supreme court's ruling likely will give even more momentum to efforts at changing the law in Colorado.”

“Today's ruling protects Colorado's robust energy portfolio and energy independence, and sends a strong message to the deceptive anti-energy extremists. The Colorado Supreme Court is protecting our democratic process and their ruling will help protect our health, safety and property from the attacks of dangerous special interest groups.”

Congressman Jared Polis, who filed an amicus brief in support of the City of Fort Collins, said about the decision:

"I am extremely disappointed with the bad decision today to overturn the will of the voters in Longmont and Fort Collins. It's a blow to democracy and local control.

"While at least the courts found today that local government land use authority and regulations can coexist with state regulations, the communities being hurt by unregulated fracking are looking to enact stronger measures to protect homeowners, and this case doesn't help.

"Now that the law has been interpreted, it's up to the state legislature or the people of Colorado to act to protect our neighborhoods and homes. I look forward to continuing to help advocates in these efforts to protect our communities.”