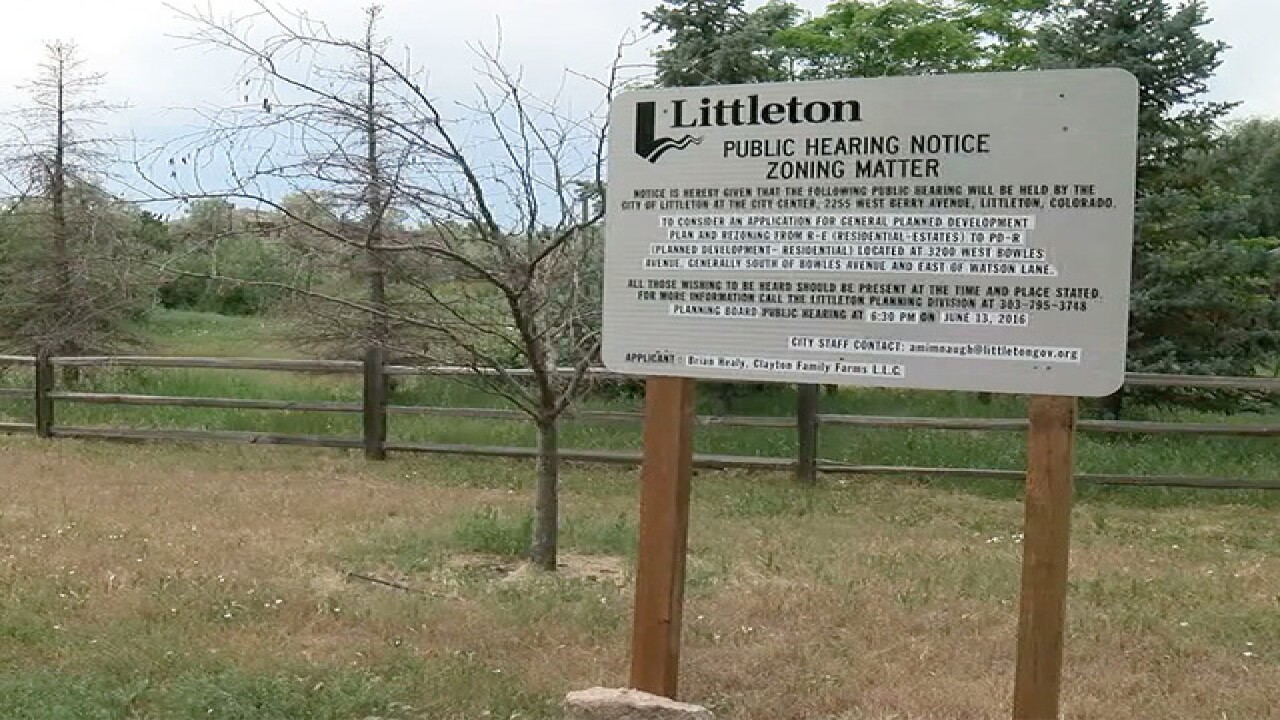 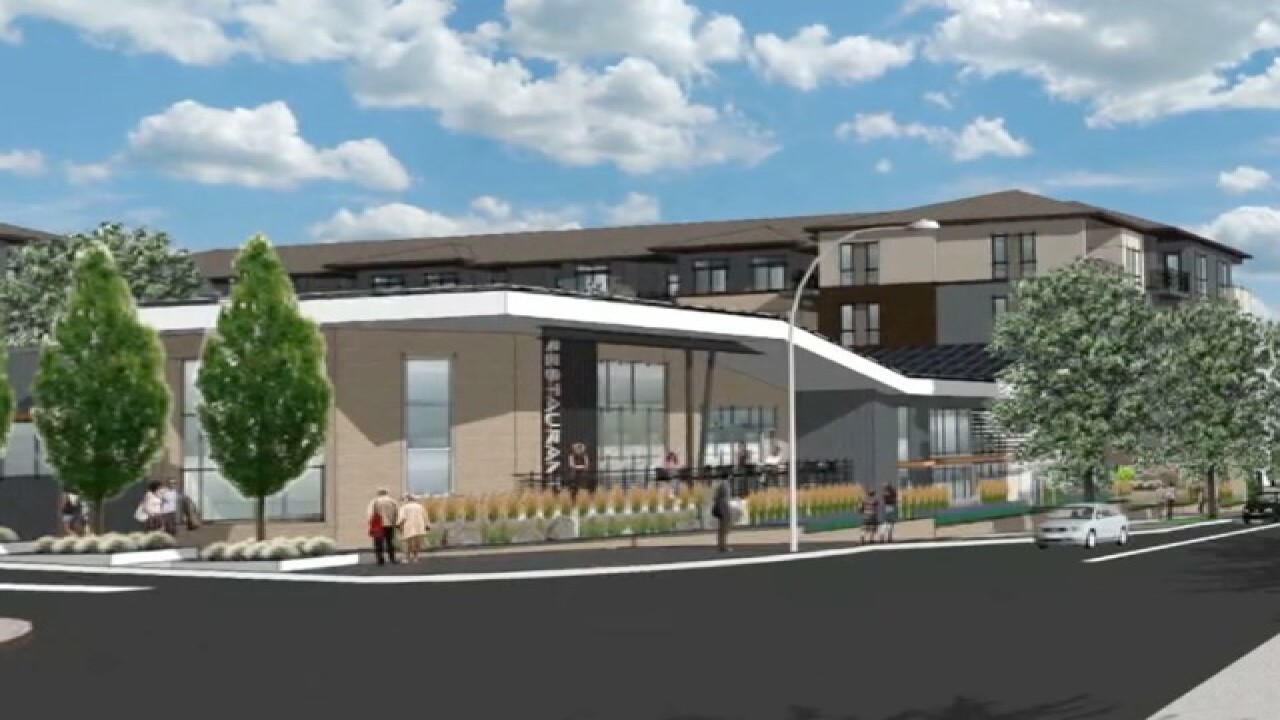 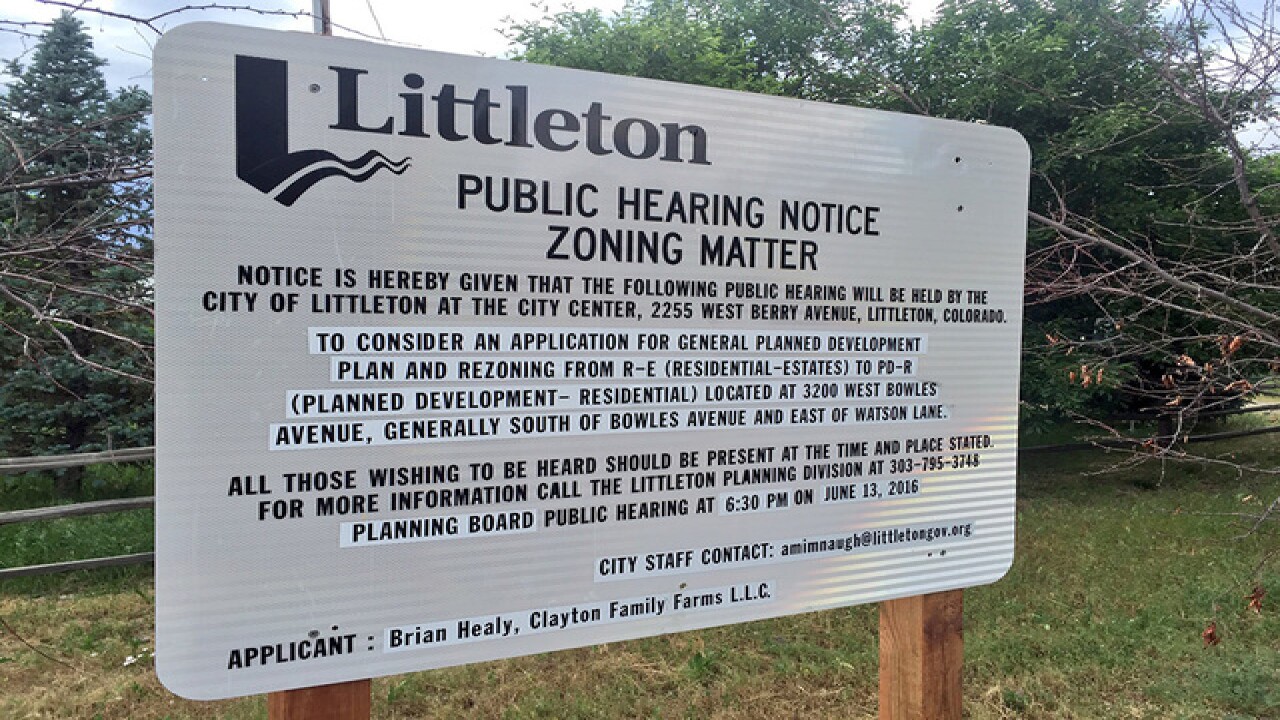 Homeowners who live in the Watson Lane neighborhood off West Bowles Avenue and Federal Boulevard are fighting back against efforts to re-zone four acres of land in their community.

'It's such a radical departure from what we have along this road and through this neighborhood," said homeowner Frank Trainer.

Trainer has lived in the community for six years and while it's not far from busy Bowles Avenue, he said the current zoning provides more space between homes and gives the neighborhood a rural feel, which is why he's concerned about what's being proposed across the street.

"It's gonna [sic] be cramming a lot of houses in a very small space," said Trainer.

Developer Brian Healy with Clayton Family Farms is asking the City of Littleton to re-zone four acres of land to build a new single-family home subdivision.

"There's a tendency in Littleton towards higher density," said Trainer.

For neighbors, that's their biggest concern because not far away, the city recently approved the controversial "Grove" project. A high-rise with 160 new apartments for seniors.

Spagnolie said the neighborhood is not against development on the land.

"The current zoning has it zoned for seven homes and we're happy to work with a developer to approve that kind of development," she said.

They just don't want to see the character of their rural neighborhood forever changed, all in favor of growth and more homes.

The city released its recommendation to the planning board Friday, and a public hearing will be held on Monday evening.

Denver7 reached out the land's owner and received this response from Clayton Camozzi:

Our family has owned this land for 53 years. It appears the neighbors are characterizing the property as rural. When we purchased the land in 1963 it truly was a rural farm on a dirt road. There were no homes across from us and it was open fields all the way to the Platte River. Since then, we have watched quietly as the property around us grew into bustling, suburban neighborhoods, and over thirty thousand cars that pass by on Bowles Avenue every day.  While we may not have thought that this change was a good fit for the land, we respected their property rights and the fact that people live differently as time passes. This area is right outside of downtown Littleton and now walking distance to the light rail station. Zoning put in place over 104 years ago in 1912 for this site cannot be expected to be appropriate for today’s Littleton. We have been working with the city of Littleton on this project for the past few years. We are proposing 22 single-family homes, a use that is compatible with the City’s Comprehensive Plan. We have tried to reach out to the neighbors to address their concerns many times, but they have continually refused to meet with us.  Regardless, from the beginning of the process, we have made a concerted effort to accommodate our neighbors.

City of Littleton staff are recommending the council approve the proposal to build 22 homes instead of the seven the land is currently zoned for, according to a report just released by city officials.

The report states the community will benefit from more homes close to employment opportunities and retail, while using existing utility lines.

Neighbors who are against the development plan to voice their concerns during a public hearing on Monday at 6:30 p.m. at the Littleton Center, 2255 West Berry Avenue.