Megan Olson was angry about lack of tip 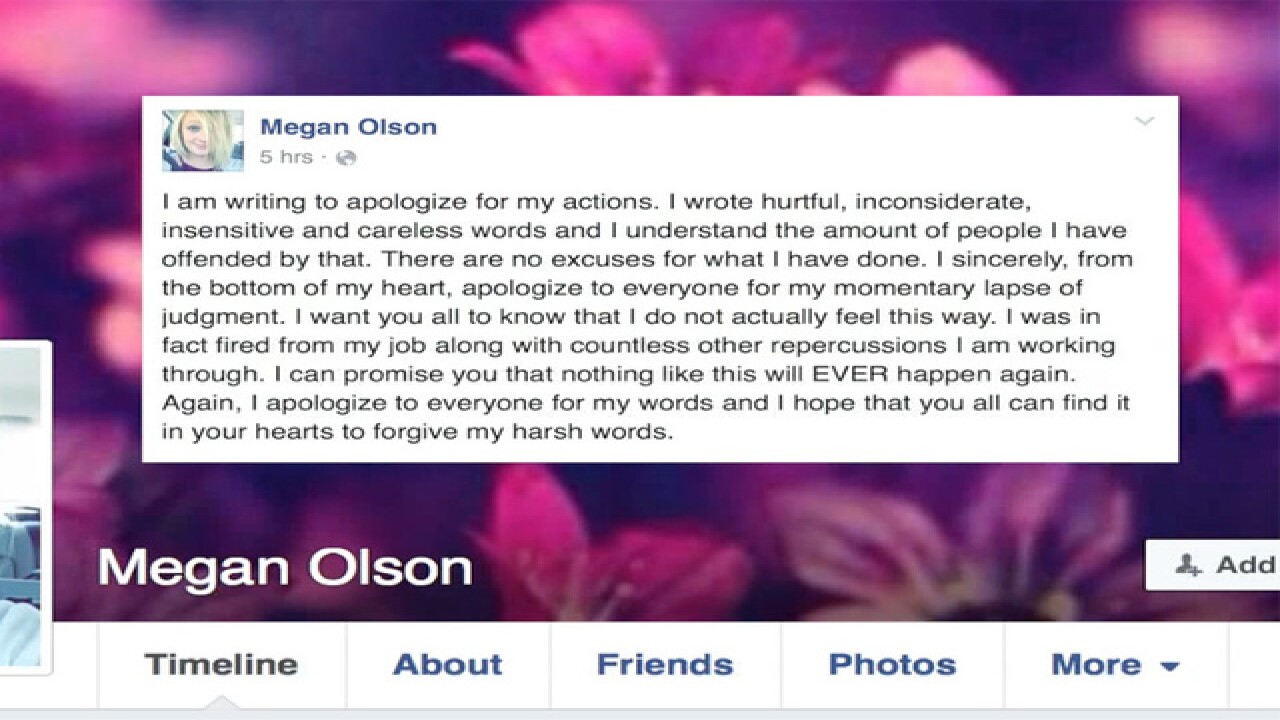 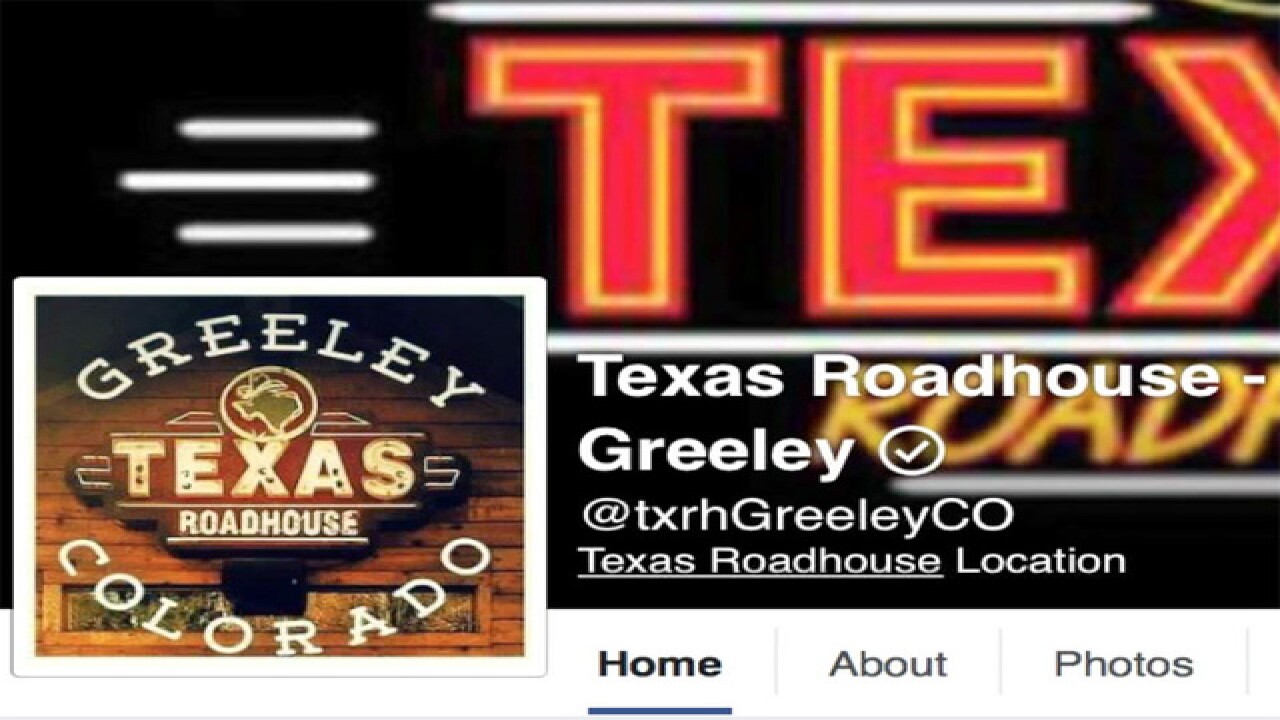 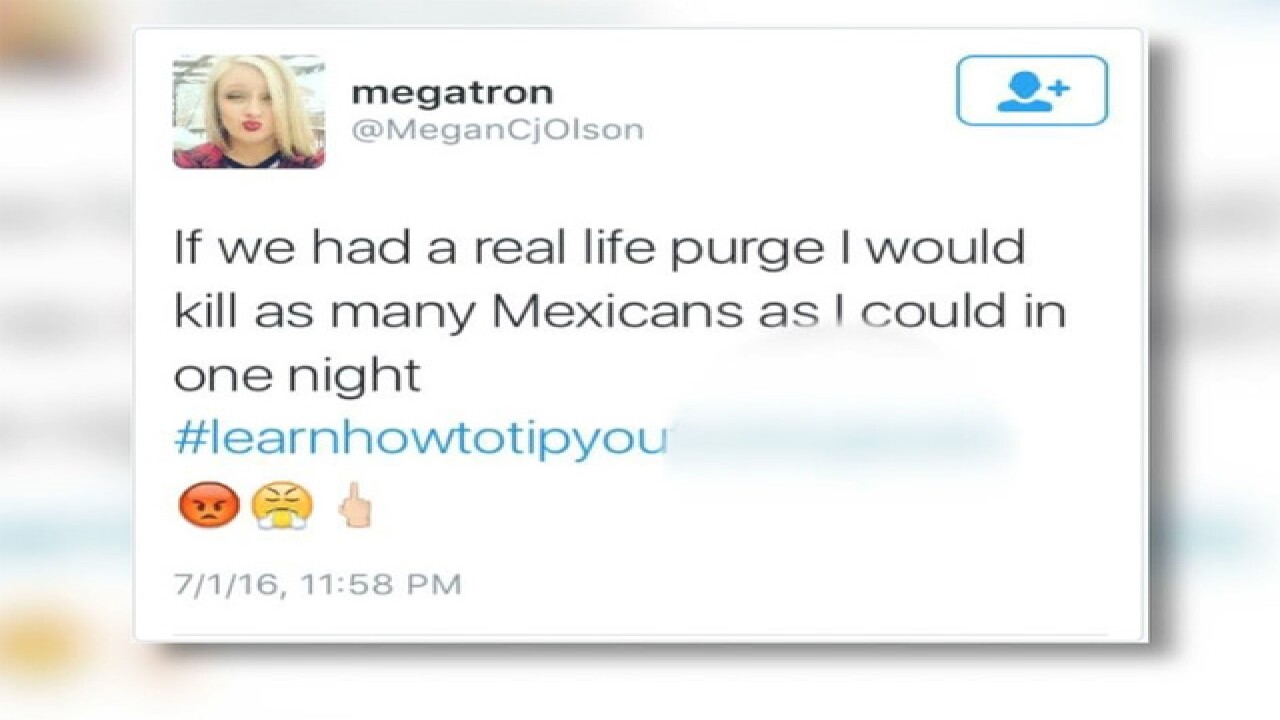 GREELEY, Colo. -- A Greeley waitress, who was apparently miffed that a customer didn't leave a tip, has been fired after she took to social media to vent her frustration earlier this month.

Megan Olson, who goes by the name "megatron" on Twitter, posted the following message on the social media site, angering many who said her tweet was racist:

One message read: "A violent and racist employee is very bad for business. Please send her packin’."

That’s exactly what management did.

“Our managing partner was actually mowing his lawn when he was alerted,” said company spokesman Travis Doster. “He immediately rushed to the restaurant, met with the employee who posted this disgusting tweet and she was terminated.”

Doster told Denver7 by phone that “this type of offensive, discriminatory language has absolutely no place at Texas Roadhouse.”

“I think Texas Roadhouse did the responsible thing in letting her go,” said Cristobal Garcia.

“A friend showed me the tweet,” he said. “I tried to take a step back and asked, ‘does Texas Roadhouse know that this is happening?’”

“I was offended by it,” said Olson’s neighbor, Willie Grantham. “As somebody who’s worked in the restaurant industry most of my adult life, I understand getting angry about customers that don’t tip.  But you can’t back it down to race.”

“If you’re going to go on social media that brightly and say what she said, you need to be removed from that position.”

“I wrote hurtful, inconsiderate, insensitive and careless words and I understand the amount of people I have offended by that. There are no excuses for what I have done. I sincerely, from the bottom of my heart, apologize to everyone for my momentary lack of judgment. I want you all to know that I do not actually feel this way.”

Olson acknowledged that she’d been fired and said, “I can promise you that nothing like that will EVER happen again.”

In a statement emailed to Denver7, executive director of Generation Latino, Maria Handley, said the tweet is part of the current political climate.

“We have seen a fear-mongering campaign that has legitimized racist comments like this across all social media networks," she said. "This hateful racist comment from a Greeley waitress is not unique. We are seeing it acted out in public, at schools and in our neighborhoods.”

Handley also wrote: “This vitriol and hate that we are seeing in our communities is real and the man leading that is running for President. Generation Latino is creating a safe space to share the voice of Latino Millennials who care and love this country, because we are Americans too, and we shouldn’t have to face verbal and physical abuse in our own country that we love.”