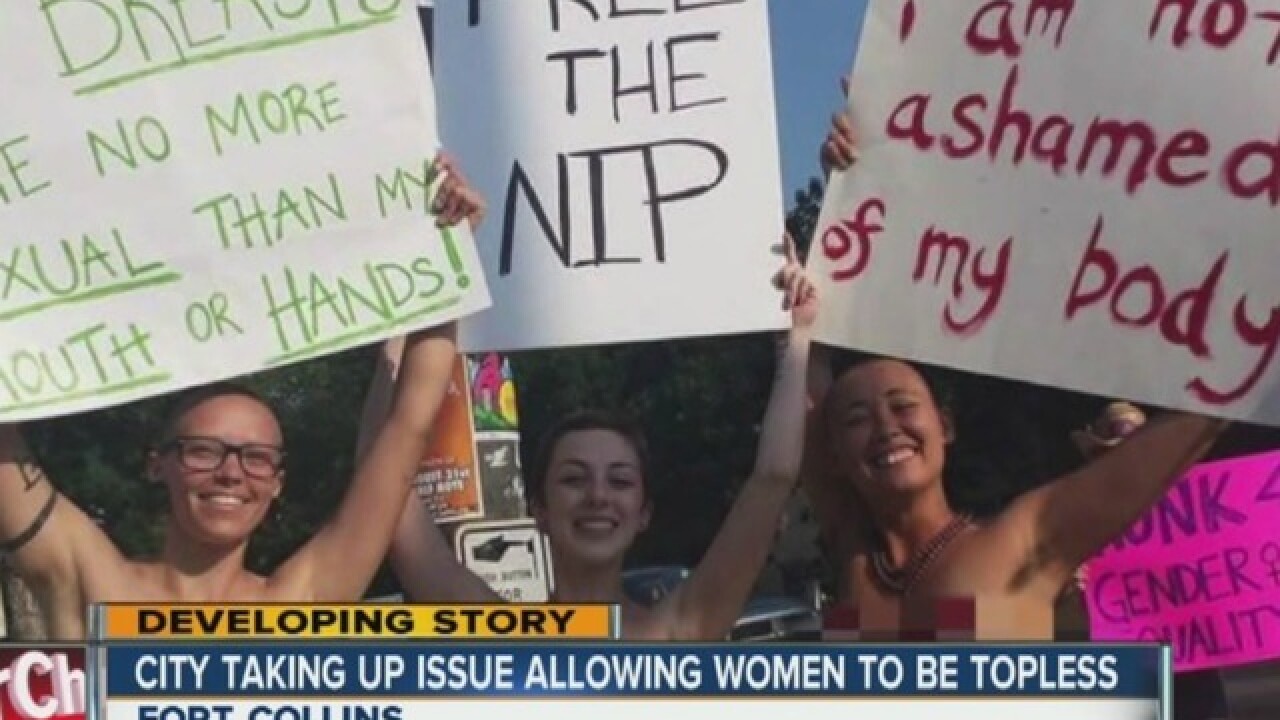 DENVER – A federal judge on Wednesday granted a preliminary injunction that will prevent Fort Collins from enforcing a city ordinance that bans women from exposing their breasts in public, other than for breastfeeding purposes.

U.S. District Court of Colorado Judge R. Brooke Jackson handed down the ruling Wednesday four months after he allowed portions of the lawsuit to proceed on the grounds the ordinance violated the U.S. Constitution’s Equal Protection Clause.

He ruled Wednesday that should the case have gone to trial as the plaintiffs, Free the Nipple – Fort Collins, Brittany Hoagland and Samantha Six, had sought, that he would have found that the ordinance would have indeed violated the clause.

“I also find that the other factors courts must assess in deciding a motion for preliminary injunction weight heavily in plaintiffs’ favor,” Judge Jackson wrote in his granting of the injunction.

The city of Fort Collins had sought to dismiss the claims that the statute violated the Equal Protection Clause after it successfully got some of the other initial claims in the suit tossed by Judge Jackson in October.

The statute in question, which said that “[n]o person shall knowingly appear in any public place in a nude state or state of undress such that the genitals or buttocks of either sex or the breast or breasts of a female are exposed,” was revised in November 2015.

The tailored version barred the exposing of breasts in public areas and on private property if the person could be viewed from a public place.

But Judge Jackson said the code’s modification “did little to mollify plaintiffs’ concerns” in his ruling Wednesday.

He also wrote that Fort Collins’ argument that topless females could disrupt public order is a “negative stereotype…namely, that society considers female breasts primarily as objects of sexual desire whereas male breasts are not.”

He further took the city to task for what he said was seemingly a lack of research for its various arguments in favor of the ordinance, including claims that exposed breasts could endanger children.

“Nor has Fort Collins provided any meaningful evidence that the mere sight of a female breast endangers children,” he wrote. “…It seems, then, that children do not need to be protected from the naked female breast itself but from the negative societal norms, expectation, and stereotypes associated with it.”

He wrote that Denver and Boulder already have legally-sound ordinances “that permit what plaintiffs here seek…But during the hearing, representatives of Fort Collins admitted that they had made no effort to contact either of these neighboring cities or any other jurisdiction to see what their experiences have been.”

“Unfortunately, our history is littered with many forms of discrimination, including discrimination against women,” Judge Jackson continued in his ruling. “As the barriers have come down, one by one, some people were made uncomfortable. In our system, however, the Constitution prevails over popular sentiment.”

He wrote that he also found that Fort Collins’ ordinance discriminates against women because of a “generalized notion” that the exposure of breasts in public “is necessarily a sexualized act.”

“I do not accept the notion, as some of those courts have, that we should continue a stereotypical distinction ‘rightly or wrongly,’ or that something passes constitutional muster because it has historically been part of ‘our culture,’” Judge Jackson writes. “We would not say that, rightly or wrongly, we should continue to recognize a fundamental difference between the ability of males and females to serve on juries…Or between male and female estate administrators…or between military cadets…or between the ability of males and females to practice law…nor should we.”

“After much thought, I have concluded that going out on this lonely limb is the right thing to do,” he continued. “I have no more right to fall back on ‘the way we have always done it’ than those who have reassessed their thinking.”

"In light of the Order issued Wednesday, the City is prohibited for now from citing women for exposing their breasts in public under the City Code, pending a final decision in this case," said City Attorney Carrie Daggett. "While the Judge has acknowledged the other cases upholding similar laws, he concluded he is likely to find the City’s restriction on female toplessness in public is based on an impermissible gender stereotype that results in a form of gender-based discrimination. The City is reviewing the Judge's decision in this case and City legal, policy and enforcement staff will be considering the City’s options for next steps in light of the Order."

The plaintiffs in the case could still pursue a permanent injunction via a trial verdict.