CSU ground zero this week for biodefense meeting on threats to livestock, crops and human life 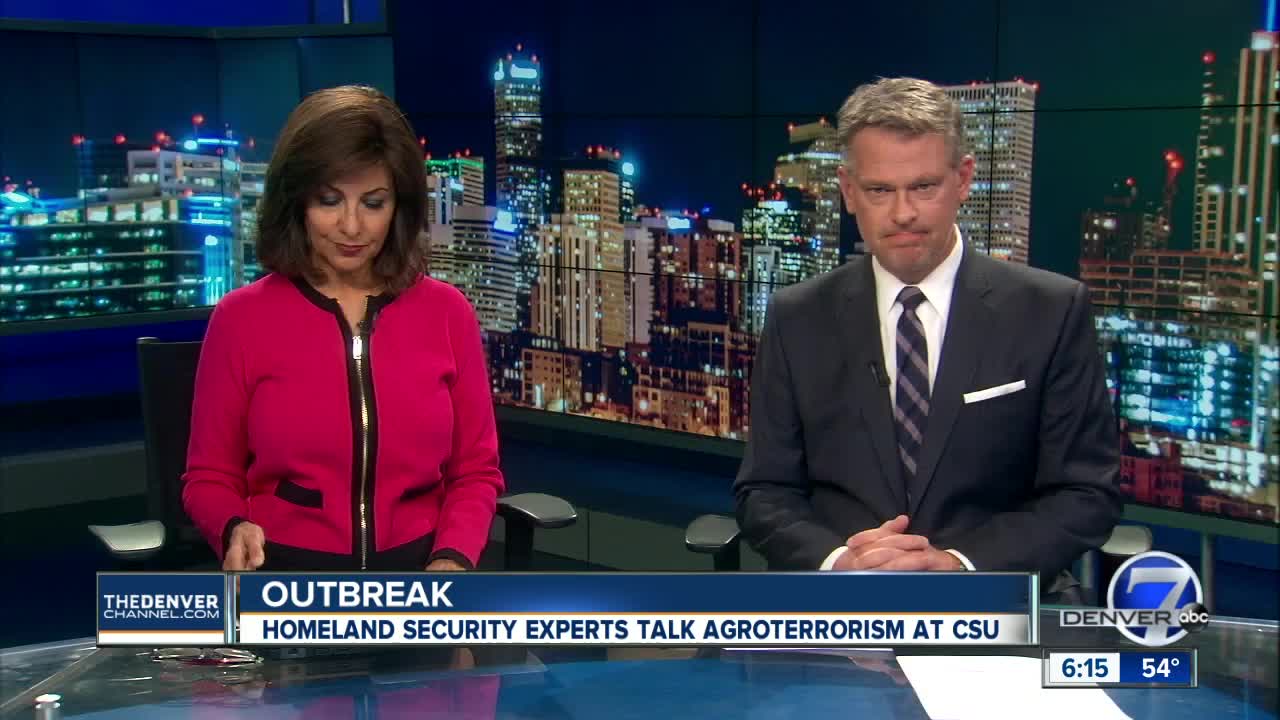 FORT COLLINS, Colo. -- China is in the midst of one of the largest outbreaks of pork disease in history, more than half-a-million pigs wiped off the map by a swine fever so insidious it's been likened to Ebola.

May would be quick to look at something like this and say "that's terrible, but it's not like it's going to happen here in the U.S., certainly not Colorado."

But, experts insist that not only is it possible, it could one day be intentional.

“There are terrorists who — online — are looking for biological weapons," said Asha George, executive director of the U.S. Commission on Biodefense.

That’s why George and others with the Bipartisan Commission on Biodefense are visiting Colorado State University in Fort Collins this week. They say there’s a real threat that it could easily happen here.

"Right now, we have an African swine flu problem in China that really isn't getting the attention it deserves,” said former U.S. Senator Tom Daschle, who sits on the commission. “But, it could easily spread to American livestock, as well."

The bi-partisan commission says it goes beyond naturally-occurring outbreaks. There are intentional threats, as well.

"The state department suspects countries like Russia, China, Iraq, Iran, North Korea and even Syria - what they’re trying to do is pursue an advantage using asymmetric warfare," George said.

And terrorist groups possibly pose the most imminent threat.

"It’s not difficult to contemplate a situation where instead of airplanes into buildings — it's pathogens against humans, pathogens against livestock or crops,” said Ken Wainstein, former homeland security advisor and commission member. “And it could have a devastating impact."

The commission says the impact to human life and the economy would be catastrophic.

"And because things move around this planet so quickly, we can have a very serious threat at our doors within 24 hours," said Alan Rudolph, vice president of research at Colorado State University.

The decision to hold the forum at CSU was no coincidence. U.S. leaders say the university is leading the charge in biodefense.

"This and Kansas State University are the only two places we’ve held these discussions,” Daschle said. “This is where people and resources and real focus and priority lies."

The team says the U.S. must develop real countermeasures like antibiotics and vaccines to isolate threats that could cause incalculable destruction.

"In the absence of those countermeasures, we're screwed," George said.

"We’re here sounding the alarm that maybe in the past and present, we're not taking the biothreat seriously enough," Wainstein said.

The commission started as a blue-ribbon study panel and eventually evolved. It delivered its first report to Congress in November 2015 and continues to make strides in biodefense.

As for what’s happening in China, George said the economic impact is global. "Sixty percent of all the pigs are either already infected or they're just killing them," she said. “That’s a huge, huge hit.”

The U.S. battled an Avian influenza outbreak in chickens and poultry a few years ago.

“When you start adding things like synthetic biology and genetic engineering, suddenly we have this massive problem that we need to deal with," George said. “We can’t ignore outbreaks and epidemics until they end up here — and then suddenly everybody's freaking out.”

The commission says bringing the conversation to universities like CSU helps to open-up the conversation, spark new ideas on how to prevent bio-threats and helps the nation understand what they're role we each play.

“Colorado State is right in the middle for good planning for that experience,” Daschle said. “With the resources and leadership to understand and study animal health.”

“The threat is exacerbated by lack of good countermeasures like antibiotics and their overuse that has resulted in bacteria becoming immune or resistant,” Rudolph said. “And these universities are now essentially ecosystems of innovation.”