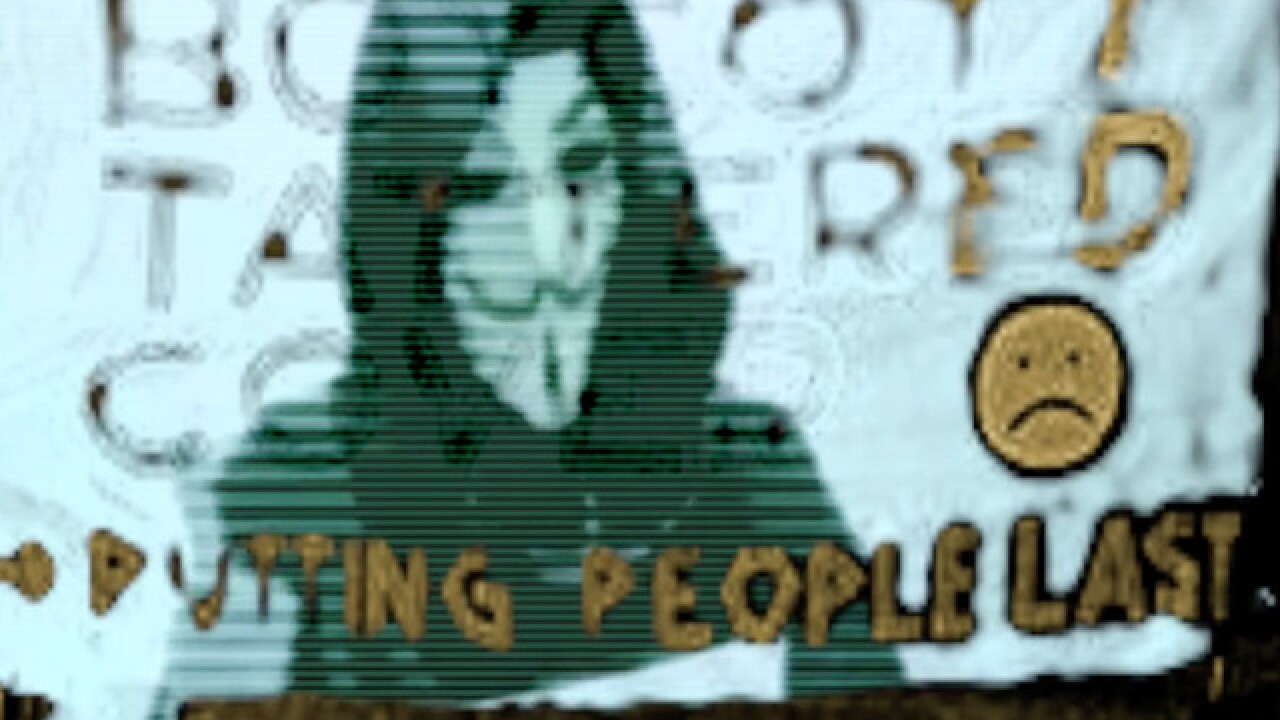 Two weeks after the City of Denver completed sweeps of homeless camps in downtown Denver, a worldwide and widely recognized hacking organization called “Anonymous” is threatening action against the city and the Downtown Denver Partnership.

The group claims to have already hacked into the site for the Downtown Denver Partnership, disabling it for a short time.

In the YouTube video released by the group, they claim the city is breaking the law by not allowing homeless people in Denver the right to rest .

Those who live on the streets believe the move by the city is an overreach.

“It was uncalled for, it was unnecessary because I was over here for 4 or 5 months, I keep it clean,” said Jerry Burton, who’s been homeless in Denver for two years.  “Now you sleep with one eye open because you don’t if the police are coming through and then most of the time when they do come through they tell you, you have to get up and move on.”

When asked about the video that Anonymous posted on YouTube, those like Terese Howard with Homeless Out Loud said they recognize the video and some of the people in the video.

“Much of the footage is just stuff that we filmed during police encounters when trying to survive out here,” said Howard.

Denver7 reached out to the Denver Human Services for comment on this story.  They declined.

Supporters of the homeless are expected to rally outside of city hall at 4:30 Monday.

Anonymous Message To The Tattered Cover,

Concerning The Tattered Covers Support Of The Homeless Camping Ban, & Membership With The Downtown Denver Partnership.

It has come to our attention that you recently expressed issues with the community feed and boycott of your establishment. You expressed confusion and anger towards peaceful protesters feeding and distributing donations to homeless individuals. You stated "Quote" Why is the Tattered Cover being singled out?

Because we have refused to cave into their demand to take a public stand against the overnight camping ordinance,..."end quote". You are confused. We want you to relinquish your public stand SUPPORTING the camping ban through membership with the Downtown Denver Partnership.

As you are aware the camping ban makes it illegal for people without a home to be homeless. Sleeping is a part of living. It is an act that must occur at some time, in some place. You say "quote"The Tattered cover is a member of several organizations (for a variety of professional reasons, and, like many individuals may be in agreement or disagreements from time to time with their decisions or actions. Including the Downtown Denver Partnership and Aclu... why choose to to point out one membership and omit the other."end quote"

The first word that comes to mind is hypocritical, the second is selfishness. Hypocritical. If you believe in something or stand for something do you also stand for the polar opposite of your position. To in anyway support the Urban Camping Ban is immoral. By doing so you are oppressing the homeless individuals who are already struggling to survive in ways many can not begin to imagine.

In stead of doing nothing (which is much less than doing something to help these individuals, you "do something" or are a "part of something" that takes direct action against them. Selfishness. It seems to us you are simply playing both sides for your own benefit. No humanity for others simply your own benefits in mind unmoved by those who are impacted by your actions.

We will state it simply. These are our demands. Remove yourself from the Downtown Denver Partnership, or be a voice in the group that stimulates the movement for the Downtown Denver Partnership to no longer support the Urban Camping Ban. You stated "The Tattered Cover does not take a public position, pro or con, on matters of public policy unless those policies impact reading, readers rights, access to content or, on rare occasion are of internal importance to the book industry."

Would the tattered cover take a stand if people were being killed or attacked and left to die on your door step. Can you truly not see this is exactly the act that is happening and Tattered Cover decides to take no stand, no opposition for crimes against human rights. As long as this is how you respond to acts against humanity we will be at your doorstep making others aware of how you feel about this community, and your lack of effort to defend it. Hope this helped answer your questions. See you next Friday. We will be watching closely. Operation Right To Rest has focused on Denver and you are rapidly approaching our sites. Ask the partnership how their last week has been.