What's next for Denver International Airport? Becoming a "city on our own" 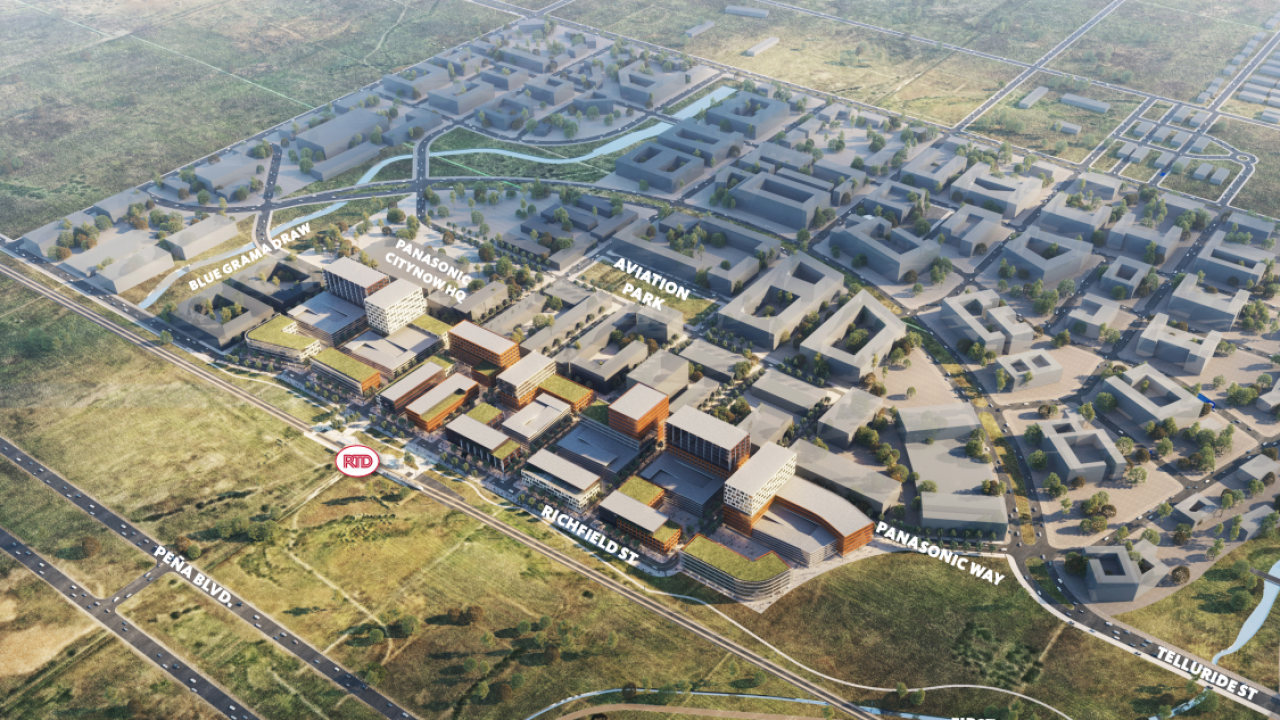 Denver International Airport.
A rendering of the planned development near Pena Boulevard.

DENVER — Denver International Airport turned 25 years old this week, and the joke still holds true: Constructed on the plains northeast of the city, the sprawling airport can feel as far away as Kansas, even as development has crept its way.

But the vast amount of property owned by the airport — the largest in the U.S., by land size — remains a crucial part of the airport's future, officials said.

"We're starting to see something tangible from a concept that started 25 years ago," DIA's chief real estate officer Darryl Jones said. "This is the beginning of the next 25 years."

The concept, Jones said, is how the airport hopes to use its sprawling property to generate non-aviation revenue.

"I can't emphasize that enough," Jones said. "[Non-aviation revenue] allows us to create revenue for the airport, which keeps our costs low. It really gives us a tremendous strategic advantage."

The airport property covers about 34,000 acres. Nearly half of that space, 16,000 acres, is available for non-aviation development, such as commercial and residential real estate.

A quarter-century into the airport's existence, that development has been minimal. But the planning has been extensive.

The airport's real estate division has plans for a 60-acre development at 61st Street and Pena Boulevard, southwest of the airport's main terminal. The project, known as the Pena Station Promenade, would include commercial and residential space and is being billed as a "transit-oriented development," anchored by the RTD light rail stop at Pena Station. This year, Jones said, the airport is receiving request-for-proposals for non-aviation development.

The master plan calls for up to 1.5 million square feet in office and retail space, running along the RTD line and Pena Boulevard. In the same area, plans call for residential development for up to 60,000 residents, about the same population as the nearby Green Valley Ranch neighborhood.

Closer to the terminal, plans call for a 150-acre "airport lifestyle district" with up to 1.6 million square feet of hotel, retail and restaurant space; an "innovation campus" on the west side of the airport property, near Rocky Mountain Arsenal; a "global business hub" on the east side of the airport, with more hotels and conference space; and an "entertainment district" near the 61st and Pena development.

Fully built out, the planned development would cover about 1,500 acres and about 20 million square feet of commercial space.

"We would be complementary to downtown but also be a city on our own," Jones said.

One airport comparable to DIA is the Dallas/Fort Worth International Airport. DFW Airport — the second-biggest U.S. airport in land size, behind DIA — sits about 20 miles from two downtown areas. But situated in the middle of the region's growing suburbs, DFW over the last two decades gradually developed commercial properties.

In late 2018, the airport had construction projects underway on 15 million square feet in 26 buildings, according to the Dallas Morning News.

But even DFW's potential real estate development area is less than half the size of the potential use at DIA.

"The amount of land we have," Jones said, "no other airport can really duplicate it."

What about the Great Hall?

The more immediate "What's next?" for most Denver airport travelers is the ongoing renovation of the Great Hall, the entrypoint terminal at the airport. The $770 million overhaul turned into a fiasco over the last year, as a dispute between a contractor and the airport brought construction to a standstill in August and set the project behind more than two years.

The good news, finally, is that construction was set to resume this month under a new contractor, Greeley-based Hansel Phelps.

Beyond the Great Hall, expansion and renovation of gate areas is also planned. The airport in January released renderings of the project, which will add 39 new gates over three concourses in the airport, an increase in capacity by about 30%.

Each concourse will also be getting an outdoor patio, which will include a pet relief area, outdoor seating and fire pits. The B-West concourse is expected to be completed by the end of the year, while A-West, B-East and C-East will be complete by the end of 2021.