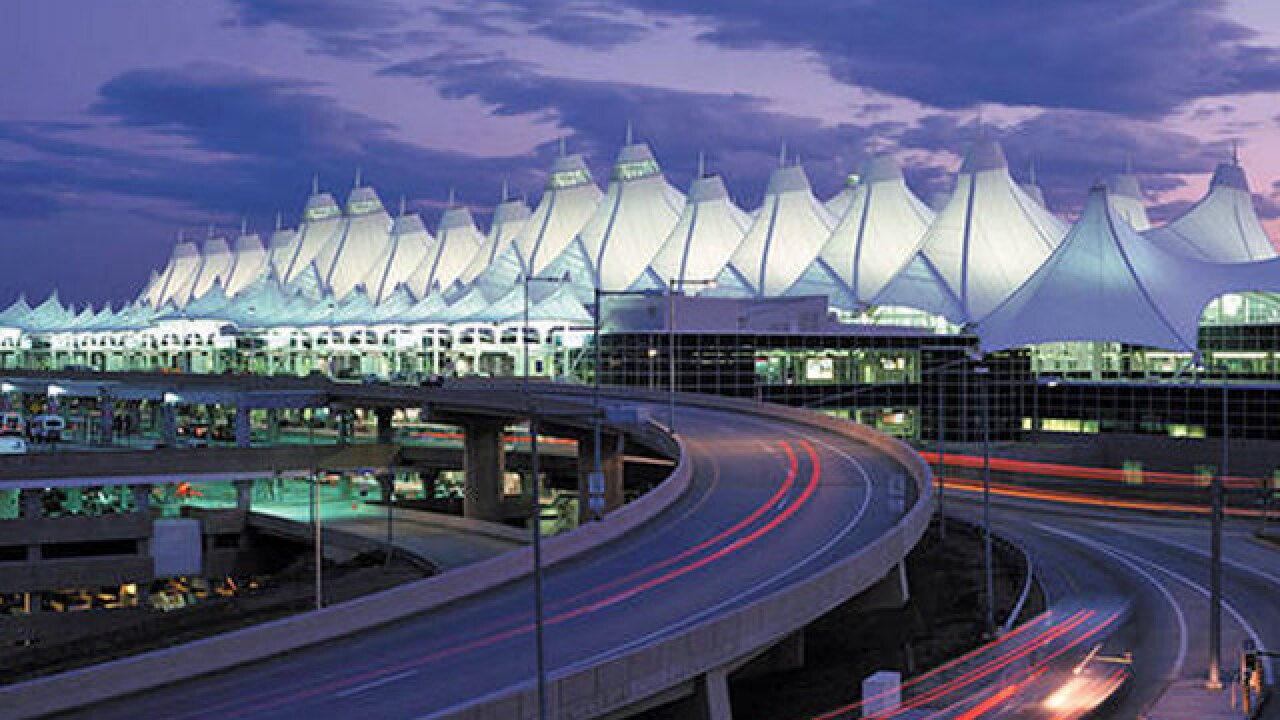 DENVER -- Grab a roll of tin foil and a bowl of popcorn; it's time to dig into the rich conspiracy theories some believe about the Denver International Airport.

Clearly, during its construction in the 1990's, a veil of secrecy that shielded much of the operation from the public eye led to the manifestation of a host of interesting theories. Some have longer legs than others.

Here are the top 10 theories that staffers at Denver International Airport hear on a regular basis.

Frequently pitched as a plausible theory for the large 33,000-acre airport is a vast underground tunnel system. While there are indeed tunnels beneath the airport, a tunnel spanning 90 miles between the airport and the military base is unlikely.

Officials at Denver International Airport have, of course, denied the theory.

2.) The airport serves as an underground bunker for the U.S. government in a post-apocalyptic scenario

Again, the mysterious underground facilities are a target of those who believe the government has much to hide. Granted, the U.S. does have a lot to hide. People like Julian Assange, the founder of WikiLeaks, work to expose that.

Denver International Airport officials say if huge military or government operations at the airport were a reality, it likely already would have been exposed. Millions more would have needed to be spent on the facility if a huge underground bunker were to be created.

Let's be realistic. The U.S. can't even hide secret payments to Iran.

3.) Tiles in the Great Hall that say "Au Ag" represent a virus known as the Australia antigen -- which is said could wipe out the world's population

Hidden in the airport is a tile with a mining cart etched into it. In the mining cart are four letters which conspiracy theorists say aren't all too innocuous. The letters "Au Ag" typically represent the elements gold and silver.

Many would believe the gold and silver on the cart are a reference to the gold rush, which built up the Denver area into a major U.S. city. Conspiracy theorists disagree, so this one might just be up in the N and O2. (Nitrogen and Oxygen make up 99 percent of the chemical composition of air.)

4.) The airport's time capsule shows evidence that the New World Order (NWO) is involved in the airport's construction

When the time capsule was built, it was stamped with a bunch of letters and symbols. Those letters included the New World Airport Commission. Many take that organization -- which doesn't exist -- to be a reference to what some describe as the New World Order, a government organization that will rule humanity after an apocalyptic event.

The only problem with this theory is that the New World Airport Commission did exist when the capsule was placed in 1994. The civic organization helped organize events opening airports, as they did in Denver.

5.) Masonry symbols on that same time capsule prove the involvement of the Illuminati

Quite clearly, the Illuminati is working with the New World Order, and the keys to the kingdom are stashed in the Denver International Airport time capsule. The ruler and compass commonly associated with the Free Mason group are stamped prominently on the capsule.

Officials at the airport say the fraternal organization -- which is still active today -- is commonly involved in the erection of public buildings. They even say the group constructed the time capsule. This mystery may go unsolved until the capsule is opened.

6.) Illuminati will use the airport as a headquarters as they take over humanity

Several images in the building, including a mural with a masked soldier, give credence to a plot to take over the world. None more than the red-eyed evil mustang (also known as "Blucifer") that stands guard outside the Illumin... rather public... facility.

Airport officials laugh off this theory, but should they?

Realistically, airport officials say a diverse amount of artwork, architecture and murals have led to a host of different theories relating back to a world takeover. In the 20-plus years of the airport's history, they say that takeover hasn't happened.

The more interesting symbols, including gargoyles, the soldier mural, the blue mustang and more all have been cited as suspicious.

7.) A secret runway is buried inches underneath the dirt on the facility

One of the less nefarious theories swirling around the Denver airport is one that says a runway that was built hidden from the public eye is buried underneath the dirt.

What might it be used for? Nobody knows, and officials at the airport say they can't figure out why it's even a theory.

8.) Five buildings are buried because they were constructed in the wrong place

Another theory airport officials often hear is one that leaves them slightly confused. They say many suggest there are several buildings that were buried under the dirt only because they were placed incorrectly.

The only reason, they say, to hide such a thing would be to cover up misused funds. It's fair to point out the largest waste of money is a now-defunct baggage system that cost over $180 million and was discontinued in 2010 due to cost.

9.) Runways are organized in the shape of a Nazi swastika, representing a Neo-Nazi takeover

Conspiracy theorists say the image of the airport from space actually hearkens back to World War II, and one of the most evil groups to exist -- the Nazi party, which eradicated millions of humans just for their religious beliefs.

It's true that the airport does have a pattern similar to the swastika, with several arms connected to the main body, but officials say the design is actually just efficient for bringing in traffic to a busy airport, with planes approaching frequently from all angles.

It may also be worth mentioning the swastika was used for thousands of years prior to Adolf Hitler's adoption of the symbol. For at least five millennia, the swastika has been a symbol meaning good fortune and well-being. It's had negative connotations for less than a century.

10.) Lizard people are in hiding underneath the airport and will eventually take over the world

An alien lizard race poised to take over the United States and subsequently the world. Does that sound crazy? To some, perhaps, but not to certain conspiracy theorists who refuse to let this theory morph into history.

Many theorists say these lizard people (known as "Reptilians") are able to shape-shift and control the airport, using it as a base of operations in their quest to rule the Earth. The race reportedly uses slaves underneath the airport.

Denver officials only could say, "You can't make this stuff up."

"At the end of the day, we are the largest airport in North America and the second largest in the world. We have 1,500 flight operations a day and 54 million passengers per year," Senior Public Information Officer Heath Montgomery said. "If we were going to try to hide something, it would be a really bad place to hide it with all the people that work and visit this facility."

As it happens, the airport Thursday announced it selected a winner for its conspiracy theory contest. That lucky person will get a tour underground to the basement level of the airport, with the opportunity to scout out some of these theories for his or her own eyes.

The promotion caps off Thursday night with a free screening of 'Close Encounters of the Third Kind' and a conspiracy-themed costume party. Stop by at 5 p.m. to participate. You might just find a new conspiracy theory to start talking about.