Students launch campaign "Regis Is Not Me" 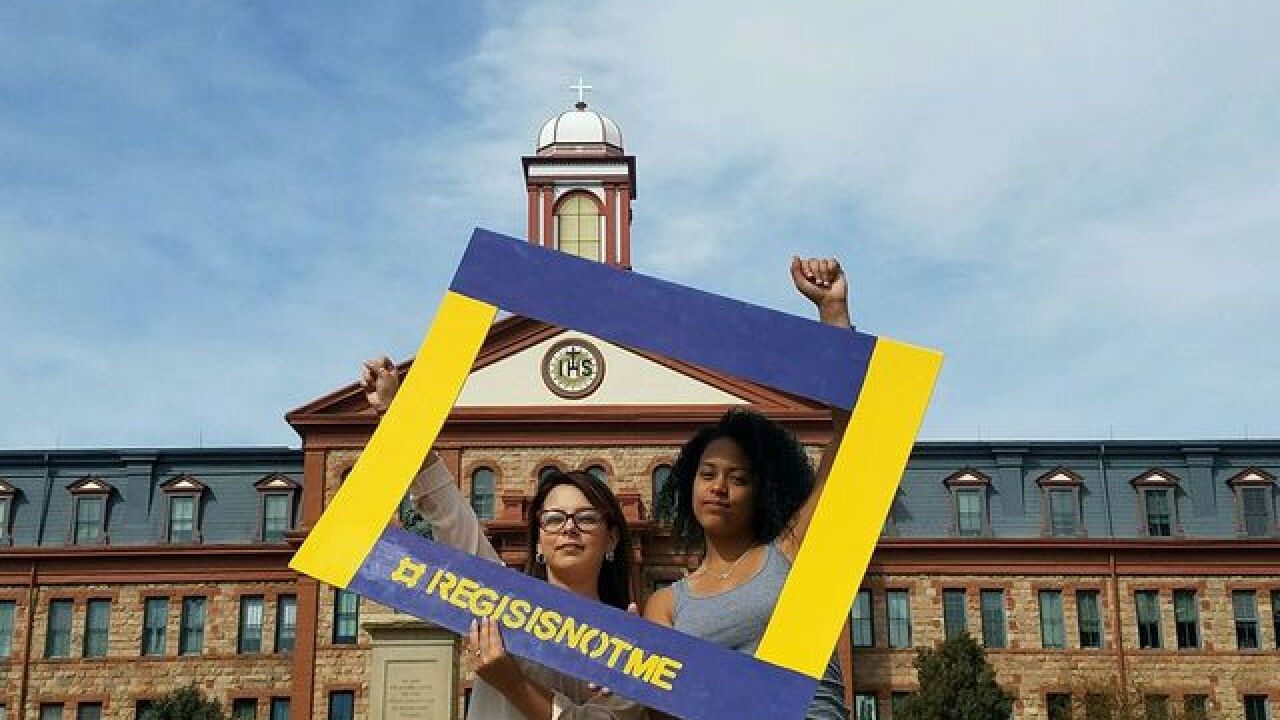 DENVER -- At the private Jesuit college Regis University, some students have questions outside of the classroom.

Two students, Junior Kiara Long and Senior Ashleigh Skeens, started a campaign called “Regis Is Not Me” to highlight the racial tensions at their school. They told Denver7 they do not feel as though the school’s administration has done enough to address some of the recent incidents on campus.

“Technically we are Regis, but Regis is not us. Like Regis does not embody who we are as people," said Long.

“I’ve had a professor tell me that I shouldn’t be applying to be a pre-law minor because I was a female and I was going to change my mind after a while,” Keens said.

Long told Denver7 that's just one of the examples of things that happen on campus and which go unaddressed by the staff.

For instance, the menu on a certain holiday left a bad taste in their mouths.

“I think it was MLK Jr. Day, let’s serve chicken and we are just going to go with that,” said Keens.

“We don’t think they meant anything by it, but we still have to let them know, this is not OK,” said Long.

The most recent incident occurred during Social Justice Week, when the campus had different groups speak about issues in the community.

A student held a bake sale where he allegedly priced the cookies according to a student’s race.

The school shut the bake sale down, but some felt it was swept under the rug. It is not clear if the student was disciplined in any way, but the school provided this statement to Denver 7:

“Regis University welcomes and encourages diverse viewpoints on campus. However, the bake sale you referenced violated university policy and federal law by selling items at different prices based on race and gender.

Last week, in response to the bake sale, the Office of Diversity held an open forum for students who felt marginalized, attacked or unsafe. This was facilitated by a Regis counselor and attended by Diversity office staff. Regis is hosting more of these: A forum about race at Regis, where a lot of these same issues will be discussed, will be held next week. The entire Regis community is invited.”

Keens and Long felt like actions weeks later are a little too late.

“It’s been two weeks and students are still outraged. We are still having meetings about it and still no email has come out to the student body addressing the issue,” said Long.

As for the sign in the cafeteria, the school stated it came from the catering company it contracts.

In a statement, Jennifer Forker with Regis’ Marketing and Communications said:

“The Bon Appetit Management Co. sets its own daily menu, and this was one of the entrees the café was offering on Martin Luther King Day… Café managers acknowledged their error, and the sign was removed that day.”

The students hope the school will do it’s best to make them all feel like they belong.

Regis University, guided by our Jesuit values and a commitment to inclusivity, strives to create and maintain a welcoming, safe and secure campus environment for all students, faculty and staff. The university celebrates the diversity of people who come to Regis for a Jesuit education that focuses on developing leaders who will do and become more for the benefit of society as a whole, are globally focused and committed to the service of others, particularly those on the margins of society.

The university does not tolerate discrimination against individuals based on their religion, ethnicity, race, gender, sexual orientation or place of origin. Moreover, the university actively engages its faculty, staff and students to address issues of diversity. We recognize that the racial tension that exists in the United States also is present on campuses of higher education. Regis is not exempt; rather, Regis is engaged in addressing the issues in a straight-forward and honest manner. For example, students were given the opportunity to speak with a counselor and Office of Diversity staff after an incident last week left several feeling negatively impacted. Other examples:

·The University is hosting “Courageous Conversations: Race at Regis, a dialogue across difference” on April 5. This event is sponsored by our student government association, Regis’ Institute on the Common Good and its Office of Diversity, Equity and Inclusive Excellence.

· On March 30, the University dedicated “Iggy’s Hub” in Dayton Memorial Library. A refuge for anyone who feels they are being harassed or threatened, Iggy’s Hub gets its name from St. Ignatius of Loyola and is built on the Jesuit value of cura personalis, or care for the whole person. It underscores Regis’ acceptance of all faiths, backgrounds, age, race and sexual orientation.

· The University hosted a Diversity and Leadership Summit with Denver Mayor Michael B. Hancock in February.

· The University is hosting a summit of Denver-area university presidents, provosts, diversity officers and students in May to address civil discourse in higher education and including matters of social justice and inclusivity.

· Last fall the provost’s office sponsored a series of dialogues with faculty about “difficult discussions in the classroom.” The Office of Diversity hosted similar discussions with students, faculty and staff.

· The provost has a 15-member Diversity Council – made up of students, staff and faculty -- that advises her.

· The Office of Diversity and the Diversity Council hosted the Fall Faculty Conference speaker, who talked about implicit racial bias and micro-aggressions.

· The University sponsored faculty development opportunities by funding webinars and conference attendance for faculty and staff in areas of racial inequities, stereotyping, micro-aggressions and implicit bias.

· In August, we are working with faculty to design workshops for all faculty on strategies of creating more         inclusive environments in curriculum and in the classrooms.