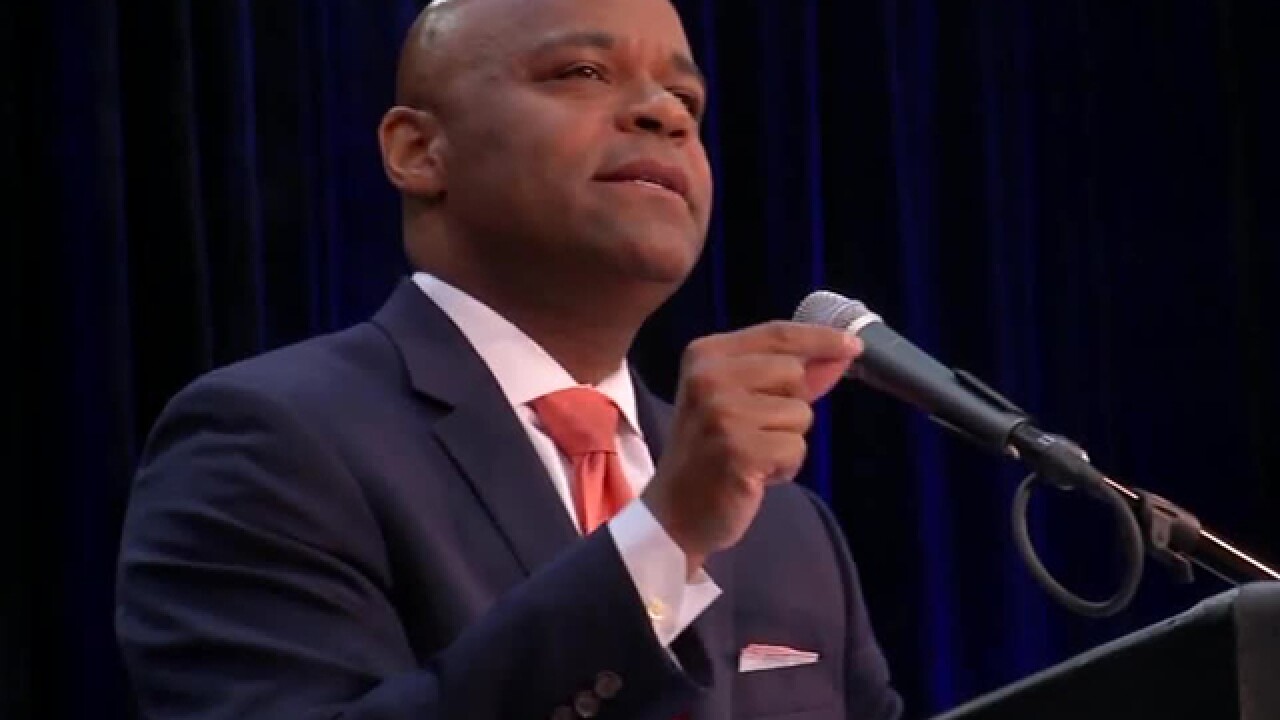 Copyright 2017 Scripps Media, Inc. All rights reserved. This material may not be published, broadcast, rewritten, or redistributed.
<p>Denver Mayor Michael Hancock delivers his annual State of the City address on July 10, 2017.</p>

DENVER – A former aide to Denver Mayor Michael Hancock, fired in 2012 after a veteran police detective raised allegations of sexual harassment against him, has now filed a claim with the city regarding the mayor and the city’s attorney for defamation, breach of contract and fraud.

Craig Silverman of 710KNUS news/talk radio, was the first to report this latest development in the case. That station, along with Denver7, The Denver Post, KDVR Fox 31 and KUSA 9News, are part of a consortium of news media outlets which have been tracking details since Denver7's Tony Kovaleski first broke the story back in Feb. 27 of this year.

In the formal claim filed on Aug. 21 obtained by Denver7 Saturday, Wayne McDonald states Hancock, as well as city attorney Kristin Bronson, broke a non-disparagement clause when the mayor and Bronson publicly discussed his firing in 2012. These statements came in the aftermath of a Denver7 exclusive in which Denver Police Detective Leslie Branch-Wise accused the mayor of sexually harassing her when she worked on Hancock’s security detail in 2011 and 2012.

Branch-Wise first raised allegations of sexual harassment against McDonald, exclusively telling Denver7's Tony Kovaleski the harassment became so unbearable, she called the mayor to tell him she wanted to be taken off the detail because of McDonald's behavior.

Hancock took action and fired McDonald four days later. McDonald then sued the city for wrongful termination but ultimately settled with the city for $200,000 in 2016.

That settlement, however, had a non-disparagement clause as well as an agreement not to disseminate any information in connection with the lawsuit, that McDonald now says Hancock and Bronson broke when discussing the Branch-Wise case.

The non-disparagement clause in that settlement reads as follows:

E. Non-Disparagement and Agreement Not to Disseminate: Mr. McDonald, for his part, and Mr. Hancock, Ms. Miller and Ms. O’Malley, for their part, agree that they will not make disparaging statements regarding one another. In addition, Mr. McDonald, Mr. Hancock, Ms. Miller, and Ms. O’Malley agree that they shall neither publicize, nor disseminate, either directly or indirectly, any of the factual matters or discovery material developed in connection with the lawsuit.

The claim states the clause was breached when Bronson "disparaged" McDonald in a statement from city officials which reads in part, "In 2012, Detective Branch-Wise filed a complaint with the City claiming that she was being sexually harassed by a then-member of the Mayor’s staff. The matter was reviewed, and the employee was terminated."

In a now-deleted video statement posted to the mayor's YouTube channel, the claim also alleges Hancock made a disparaging statement against McDonald, saying in part, "...what I heard (from Branch-Wise) greatly disturbed me," therefore breaching the non-disparagement clause. The claim goes on to say these statements "are even more harmful than the statements made in 2012 because they expressly state McDonald's termination was because he 'sexually harassed' Wise," and therefore fall on the realm of defamatory claims.

The claim additionally states that McDonald was never informed about Branch-Wise’s sexual harassment allegations against the mayor, which “created a false impression that McDonald relied upon, and as a result of that reliance, suffered an injury, i.e. he settled his case.” Had the city, through its officials, not concealed these facts from McDonald, then the former aide would not have settled his case for $200,000, the claim states. His attorneys say this was "a false representation of a material fact, or concealment of a material fact," and therefore, fraud.

The former aide is now asking for $300,000 in damages for defamation, breach of contract and fraud, as well as a public name-clearing from both Hancock and Bronson.

In a statement to Denver7 Bronson said, "No lawsuit has been filed and I am confident that nothing I've said, nor anything the Mayor has said about Mr. McDonald, constitutes defamation."

Denver7 has reached out to the Mayor’ Office for comment, but we have yet to hear back. Once we receive a response we will update this story.

Editor's note: Denver7 originally referred to the Notice of Claim filed by McDonald as a "lawsuit." A lawsuit can follow a Notice of Claim if the city denies the claim. We deeply regret the error.