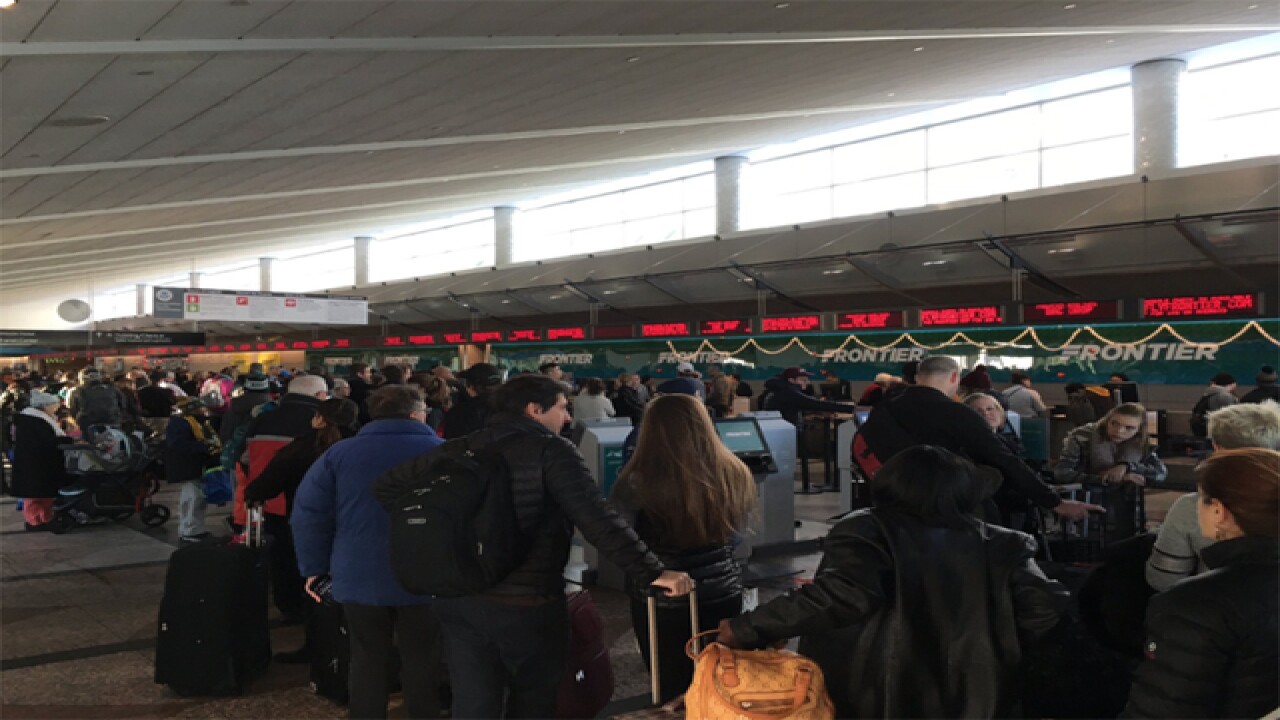 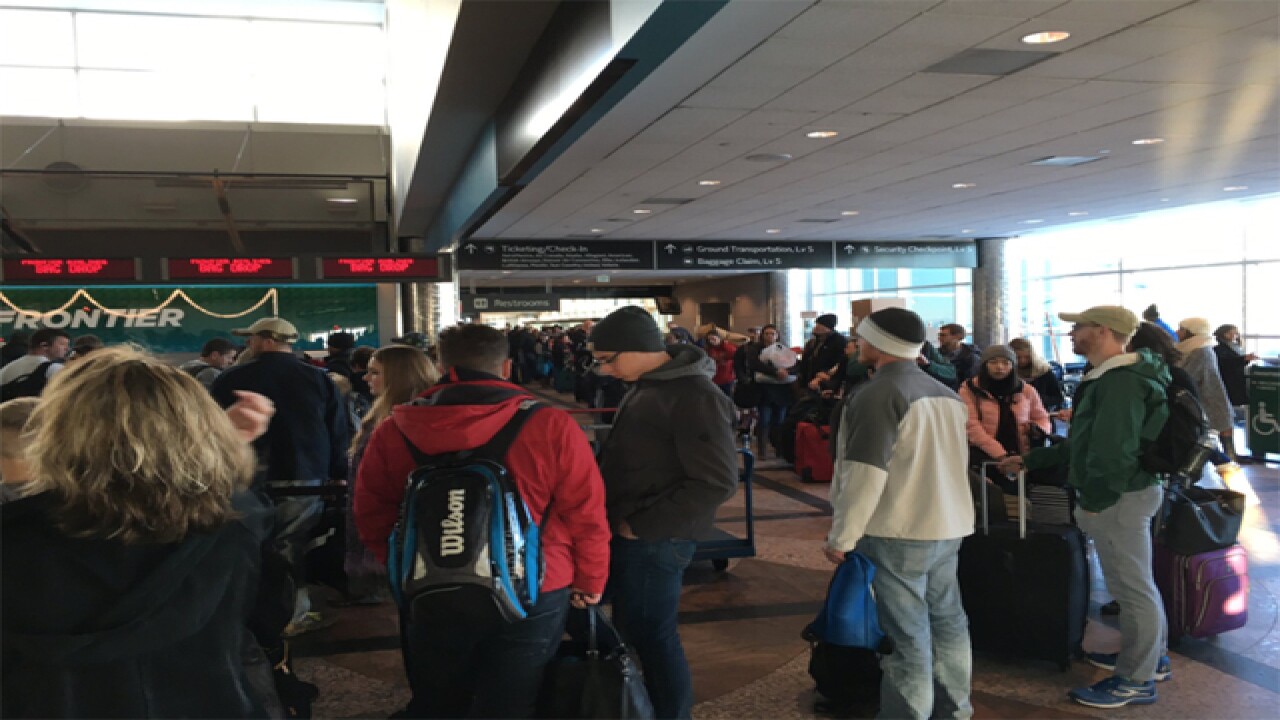 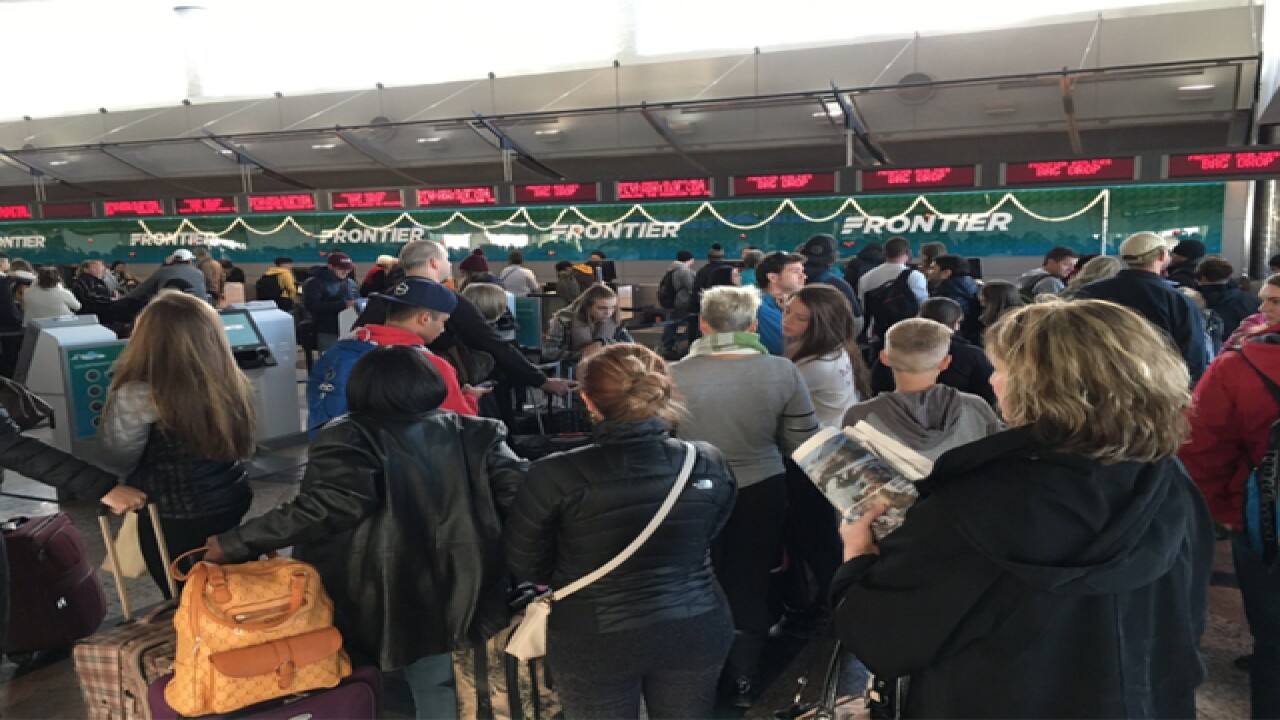 DENVER – There was a sea of luggage at the Frontier baggage claim area at Denver International Airport that grew as time passed Sunday morning.

The luggage, which came from several canceled Frontier flights, was being directed to the baggage claim area. But an excess of luggage wasn’t the only issue the airline faced.

After ten hours, Milton and Marissa Wilcox are now waiting for luggage. They say they haven't received any direction from @FlyFrontier. pic.twitter.com/FAvZnSyVjS

Frustrated @FlyFrontier passengers say they were told to go home and return tomorrow for baggage. Ppl have already spent 5hrs on tarmac.

Hundreds of passengers who flew into Denver from Atlanta waited five hours on an icy tarmac before being de-boarded. Passengers told Denver7’s Amanda del Castillo that officials kept saying the delay would only last another hour.

Tom Mitts- 14+ hrs for luggage. Was told pilot walked off... Because of wx... Questioning whether refund is in order. #Frontier says no. pic.twitter.com/QMK0jWZAQJ

The aircraft landed at around 1 a.m. At 5 a.m. passengers were reportedly told a bus would come to shuttle them to the main terminal. Relief didn’t come until just before 6 a.m.

Some passengers told Denver7 they weren't given a specific reason for the delay. Amy Britton was on the Atlanta flight. She said passengers were told, "It'll be another hour. We're fifth in line. Ok, we're still fifth in line. Now we're fourth."
The five-hour wait was a move some travelers called inhumane. "After four hours, I called the Denver security and said we're being held against our will," said Atlanta passenger Patrick Muenchen.

Upstairs, the lines at Frontier’s ticketing counter flooded the area. Many said it took them four hours to get to the front of the line, only to learn their flight had been canceled.

Lines at the Frontier ticket counter weave all the way into the main terminal. @DenverChannel pic.twitter.com/RfwMBF0vNP

Frontier spokesperson, Jim Faulkner, released a statement Sunday morning saying in part, “We’ve been working with customers who have been affected by delays.”

Faulkner also said Frontier brought in additional staff Sunday to help sort baggage and get it to the correct people and locations. He added more staff was also brought in to the reservations and customer service areas to help process calls and requests.

Denver7 has learned a phone number given to passengers to speak to a representative about rebooking flights or to call regarding luggage claims leads to a recording that disconnects moments later.

Early Sunday afternoon, Frontier Airlines said in a Facebook post they were still "experiencing higher than normal wait times in our call center," and asked passengers to fill out a request form in order to get a refund, in case they were not able to get through an agent on the phone.

The refund request form can be found here.