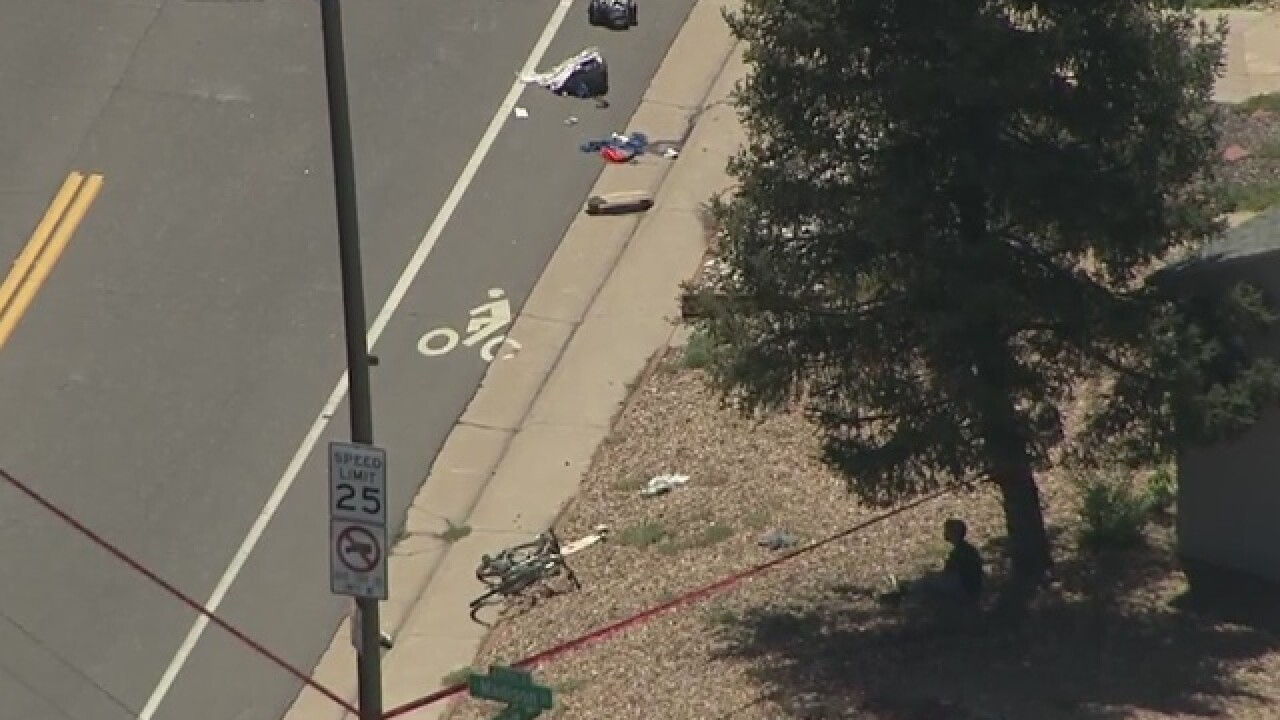 Police say Patricia Ann Livingston, 81, made a wide turn off Colorado Boulevard onto westbound Yale Avenue, and failed to stay in her lane.

They say that on July 13, as she rounded a curve near South Madison Street, she crossed into the bike lane, struck the youths and continued driving for five blocks before plowing through a creek in McWilliams Park.

One of the boys, 14-year old Cole Sukle, was critically injured.  He died the following day.

“He just said she was going fast,” said Goerdt’s father, Kenny. “They were on their way to Slavens (Elementary School.) He was on the sidewalk.  His friend, Jack, was riding back on the curb and Cole was a little bit behind them in the bike lane.”

“He’s not saying much about the accident,” he said. “He’s been pretty quiet.”

The Denver dad said it’s obvious that Livingston “shouldn’t have been driving.”

He’ll get no argument from Matt Boyles, who was in a pickup truck that was hit by Livingston 9 months ago.

Boyles told Denver7 that he and Georgette McBride were westbound on Iliff Avenue just east of Colorado Boulevard on October 5, 2015, when Livingston entered Iliff from a parking lot and struck the pickup on its left side.

Boyles said he and McBride followed the suspect and called police.

"While we were on the phone with Denver non-emergency, and we're following her, we saw her nearly hit a jogger and runner, as well as veer into oncoming traffic," he said, "so we decided it was probably best that she not be driving."

But Livingston was not arrested for that accident.

Police say there was no independent witness and that the other driver "didn't want to press charges because the suspect was an elderly female."

The police report for the earlier accident indicates that the suspect's son or grandson told investigators that they were taking steps to hire a driver for Livingston, "so this will not be an issue in the future."

It's not known whether that driver was ever hired.

Livingston is still in the hospital.

The suspect is a member of a prominent Denver family.  According to her trustee bio on the University of Denver website, she and her late husband, Johnston R. Livingston, founded two companies.  She was President and CEO of Construction Technology, Inc. until she closed it in June of 2014.

She served as a trustee at Colorado Women's College until it was merged into the University of Denver in 1982, at which time she was elected to the DU Board of Trustees.  She is presently an Honorary Life Trustee.

The two accidents are raising questions about whether Colorado's licensing requirements for elderly drivers are strict enough.

Lynn Granger, spokeswoman for the Colorado Dept. of Revenue's Division of Motor Vehicles says "the only requirement for those 65 or older are that they either renew in person or by mail. They have that option every other time, but those 65 and older cannot renew online."

Granger added that when older drivers renew their license, they must take an eye exam, even if they're renewing by mail.

She said, if they renew by mail, they must include certification that they passed their eye exam.

When asked if elderly drivers must take the physical driving test, Granger said that is not a requirement.

Granger said the Division of Motor Vehicles gets information through accident reports or through citations (if the accident box is checked.)

After his son's close call, Goerdt says elderly drivers should be required to take a driving test every year.

But state Senator John Cooke, a former Weld County Sheriff, who serves on the Senate Transportation Committee, says the tool allowing police departments to send a form to the Division of Motor Vehicles is seldom used.

He said he'd hate to see the law changed based on one incident, especially if there are many older drivers who aren't causing problems.

He said it might be worth studying to see what statistics show.

This story was updated at 10:54 a.m. July 19, to reflect Livingston's current status as an Honorary Life Trustee at the University of Denver.  She is not an active member of the board, as originally reported.