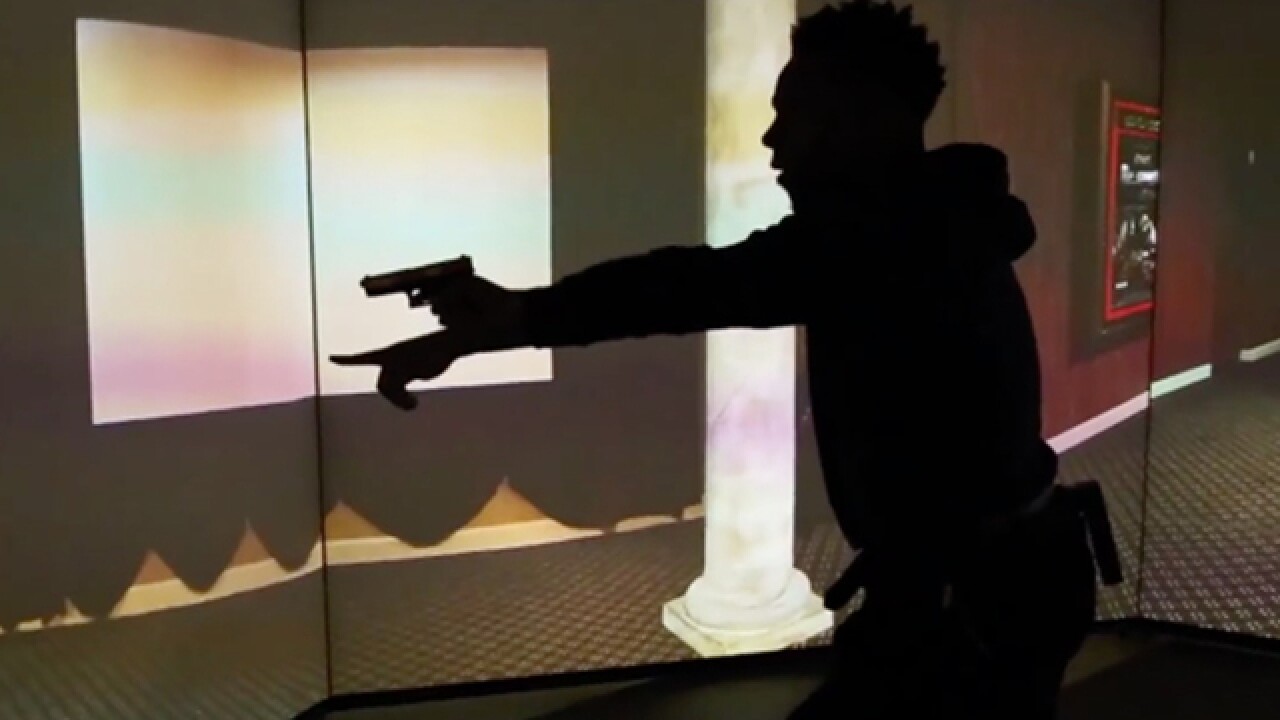 It was all part of his continued commitment to raise awareness of racial issues between police and the black community.

“Coming in here, I thought it was going to be kind of like a ‘Call of Duty’ thing,” Marshall said on a Facebook video shared by Denver police on Wednesday.

In the video, Marshall can be seen standing in the middle of a dark room as wall-size screens play certain scenarios that are aimed at training officers to respond to emergency situations.

“You’re not going to just go around and shoot the bad guys,” the Broncos linebacker said after taking part in the training scenarios. “I was up here sweating, you know… not really sure what to do or what to say."

The VirTra V-300 simulator, which is equipped with over 100 virtual scenarios also uses an “electronic stimulus” that sends a shock to those training in order to make the experience more profound.

“When I got shot in the simulator… I wanted to leave and let somebody else come handle it, but you don’t get to leave,” Marshall said.

“I think this is a perfect simulation to get people inside on what really goes on,” Marshall added.

Marshall is set to train in the simulator live this Sunday, Jan. 8, at 1:05 p.m. You can watch him go through the training exercises on the Denver Police Department Facebook page.

Marshall made headlines and alienated many of his fans when he took a knee during the national anthem as the Broncos faced the Carolina Panthers at the season opener on Sept. 8.

The move was done in support of a boycott to raise awareness of social injustice and start a conversation about the excessive use of force by police.

After eight weeks, Marshall made the decision to stand up again during the national anthem.

He stood for the anthem at Oakland on Nov. 6, in large part because, following a meeting with Denver Police chief Robert White, the department modified its use of force policy.

"Going forward, I will be standing for the National Anthem—not because everything is perfect, or because I'm changing my stance on things. But because of my hope for what we can become," Marshall said in an Instagram post adding, "there's still much work to be done."

The eight-week protest cost the linebacker a couple of endorsements from CenturyLink and the Air Academy Federal Credit Union, but also gained him another from a prepaid Visa card company founded by entrepreneur and hip-hop mogul Russell Simmons.

Despite the setbacks, Marshall made sure to effect change during the regular season.

"I plan to be involved with several other organizations that benefit the Denver community and others through the services, awareness and funds they provide for these critical social issues," he said on Instagram post back in November. "I’m excited for what all of us can accomplish when we truly work together."

The video of Marshall training in the shooting simulator comes on the same week the department released a draft modifying it’s use of force policy, which will now focus on deescalating situations and teach officers to be more adaptive.

While Chief of Police Robert White said the new policy will make officers safer, some organizations have blasted the change, saying it will benefit criminals and undermine the force.

White said feedback on the new policy will be accepted through February 4. After that, the final copy will be written and officers will be trained and expected to follow the new rules.

Watch Marshall train in the simulator below: