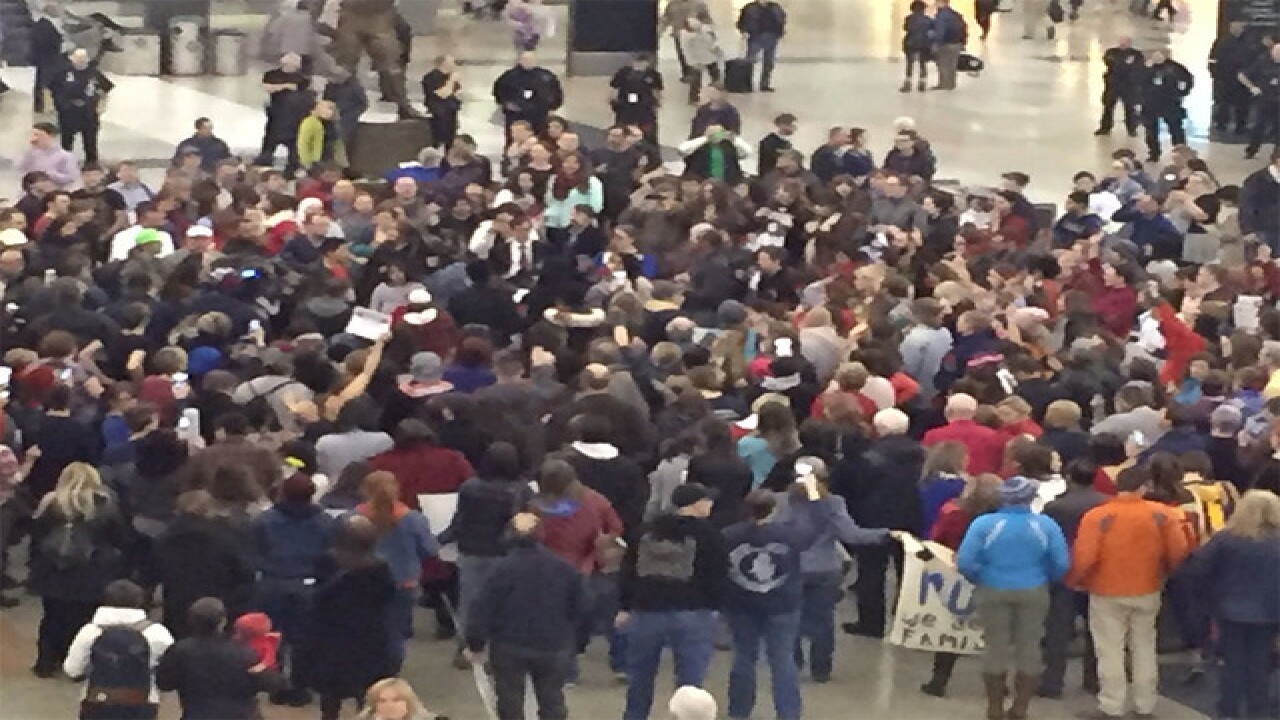 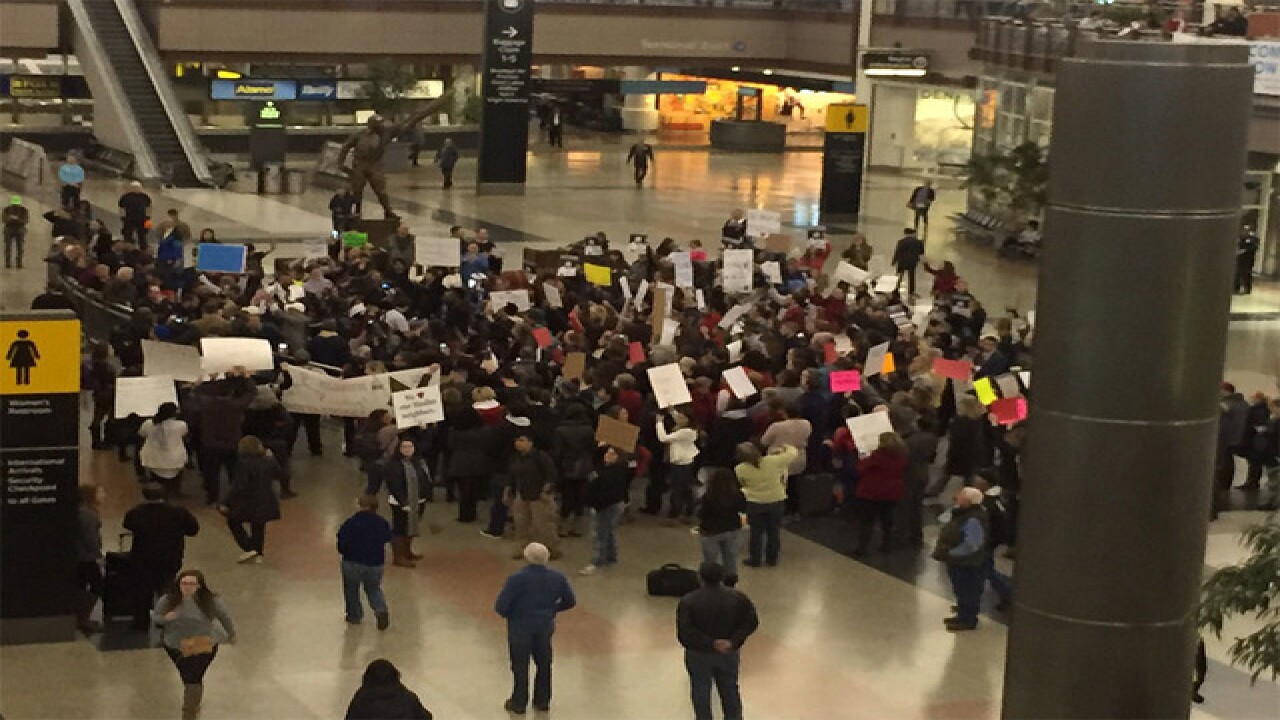 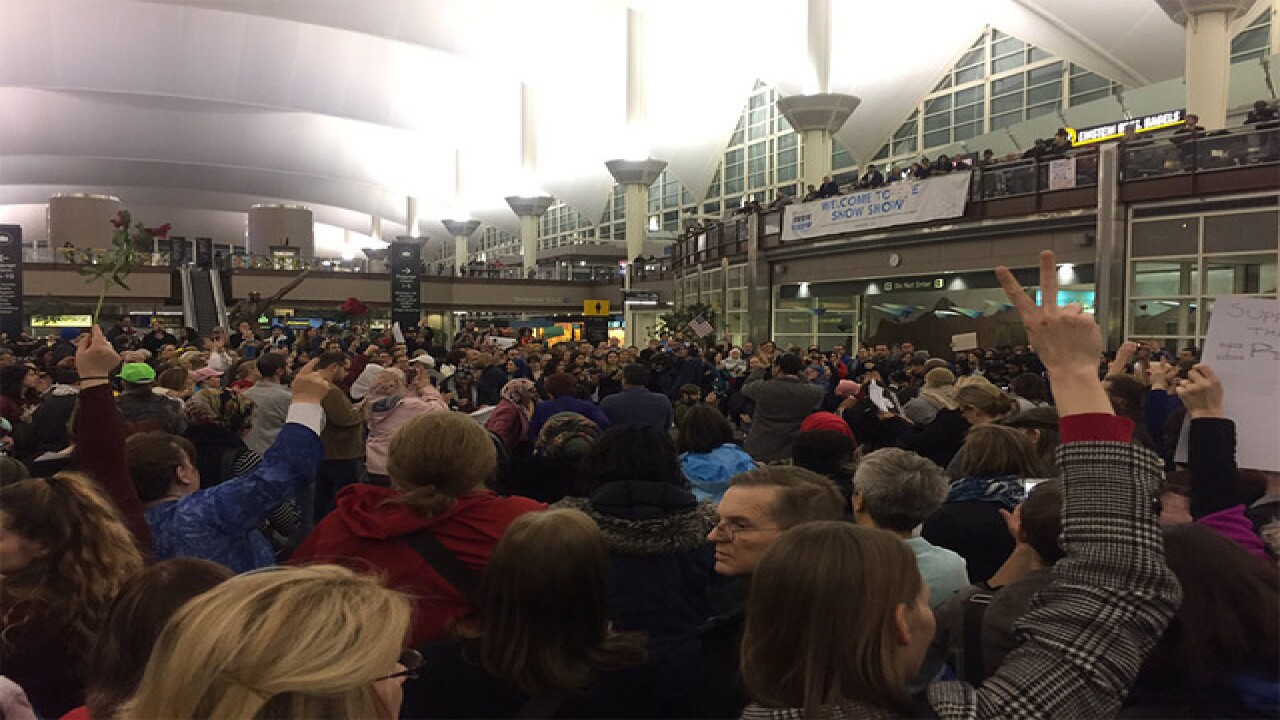 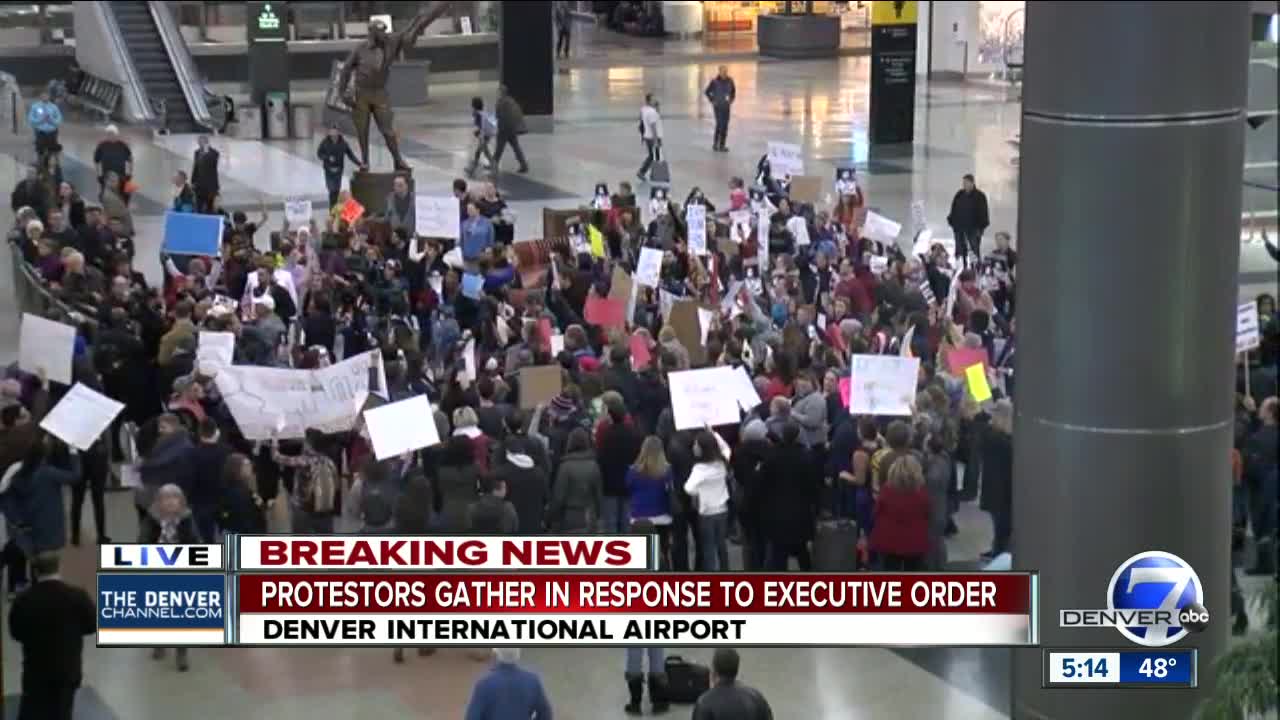 DENVER – Hundreds of protesters gathered at Denver International Airport Saturday in the wake of President Donald Trump’s orders to temporarily ban refugees from entering the U.S.

"I am here to stand in solidarity with the immigrants and green card holder, students, professional and people who came to the United States for legitimate reasons," said Samantha Reynolds. "Suddenly, they're being denied access to the place they call home, with no due process, as far as I'm concerned."

"These people," she said pointing toward the crowd, "are the defenders."

Among the defenders was Oosman Yussuf, from Kenya.

"Our friends and relatives are calling us and they ask, 'what is going on in that country," Yussuf said. "Some are really scared."

Mohamud Uvahle, of Somalia, said he too is very concerned.

"I have a lot of relatives who are wanting to come here," he said, "but they're hearing that they're not allowed, anymore, to come."

Uvahle said he worries that he goes back to Africa to visit loved ones, he won't be allowed back in the U.S.

State Representative Leslie Herod, D-Denver, told Denver7 that it was important for her to stand with her neighbors, brothers and sisters "who are immigrants and refugees."

"I think it was important for me to be here to send a message to the White House that we will not allow bans or walls and that Colorado citizens are out here watching.  We are paying attention and we will use our voice to make sure that we are heard."

The demonstration took place at the main terminal starting at 5 p.m. and organizers asked anyone coming to participate to wear all red, white or blue clothes and to bring signs with the words “I am _____, and I come in peace.”

They also handed out signs spelling out the First Amendment word for word, according to their Facebook event page.

At DIA, airport spokesman Heath Montgomery warned against “any kind of First Amendment activity” at the airport without a proper permit.

The airport then issued the following statement via Twitter:

“At this point they (organizers) have not applied for a permit,” Montgomery told Denver7.

More than a dozen immigration and civil rights attorneys were photographed waiting at the international arrivals gate "to support and assist folks" who may be affected by the temporary ban, according to one of the organizers at the airport.

Outrage and protests at airports nationwide

As President Trump's crackdown on "radical Islamic terrorists" continued into Saturday, refugees and people from the countries singled out in Trump's executive orders were in limbo as they grappled with a new reality -- will they be allowed in or will they be turned away?

At least 27 passengers were detained or sent back home from four different airports across the country Saturday, and hundreds of people around the world were barred from boarding U.S.-bound flights, ABC News reported.

Protests have taken place at John F. Kennedy Airport in New York as well as O'Hare International Airport in Chicago, and protesters plan many more over the weekend and into next week in cities like Boston, Mass.; San Francisco, Calif., and Salt Lake City, Utah, just to name a few.

At DEN, protesters chanted "Bridges, not walls," and "Let them in."

The sentiment was echoed at Dallas/Fort Worth International Airport as hundreds of protesters raised signs as they made their voices heard.

Right now @NBCDFW: Chants of "no hate, no fear" at @DFWAirport. pic.twitter.com/sVdJ9FGY0B

Trump's directive has angered rights groups as well as lawmakers at home and around the world.

The Council on American-Islamic Relations said it would challenge the constitutionality of Trump's order.

"There is no evidence that refugees - the most thoroughly vetted of all people entering our nation - are a threat to national security," Lena F. Masri, the group's national litigation director, told the AP. "This is an order that is based on bigotry, not reality."

Sen. Ben Sasse, R-Nebraska, who serves on the Senate Armed Services Committee, issued a statement saying that while the president is right to focus on border security, the order is "too broad."

"If we send a signal to the Middle East that the U.S. sees all Muslims as jihadis, the terrorist recruiters win by telling kids that America is banning Muslims and that this is America versus one religion," Sasse said. "Our generational fight against jihadism requires wisdom."

"The US decision to restrict travel for Muslims to the US, even if for a temporary period of three months, is an obvious insult to the Islamic world and in particular to the great nation of Iran," the statement said.

In Canada, the tone was much different.

Prime Minister Justin Trudeau tweeted Saturday afternoon to say that refugees were welcome in Canada, "regardless of your faith."

(1/2) While I've supported heightened vetting procedures, I have never, nor will I ever support a blanket travel ban.....

(2/2) for people solely based on ethnic or religious grounds.

It is unclear how many people would be immediately impacted by the non-refugee travel ban.

Statistics maintained by the Homeland Security Department and obtained by the AP show that about 17,000 students from the seven designated countries were allowed into the U.S. for the 2015-2016 school year.

In 2015 more than 86,000 people from those countries arrived in the U.S. on other, non-immigrant visas and more than 52,000 others became legal permanent residents, the AP reported.