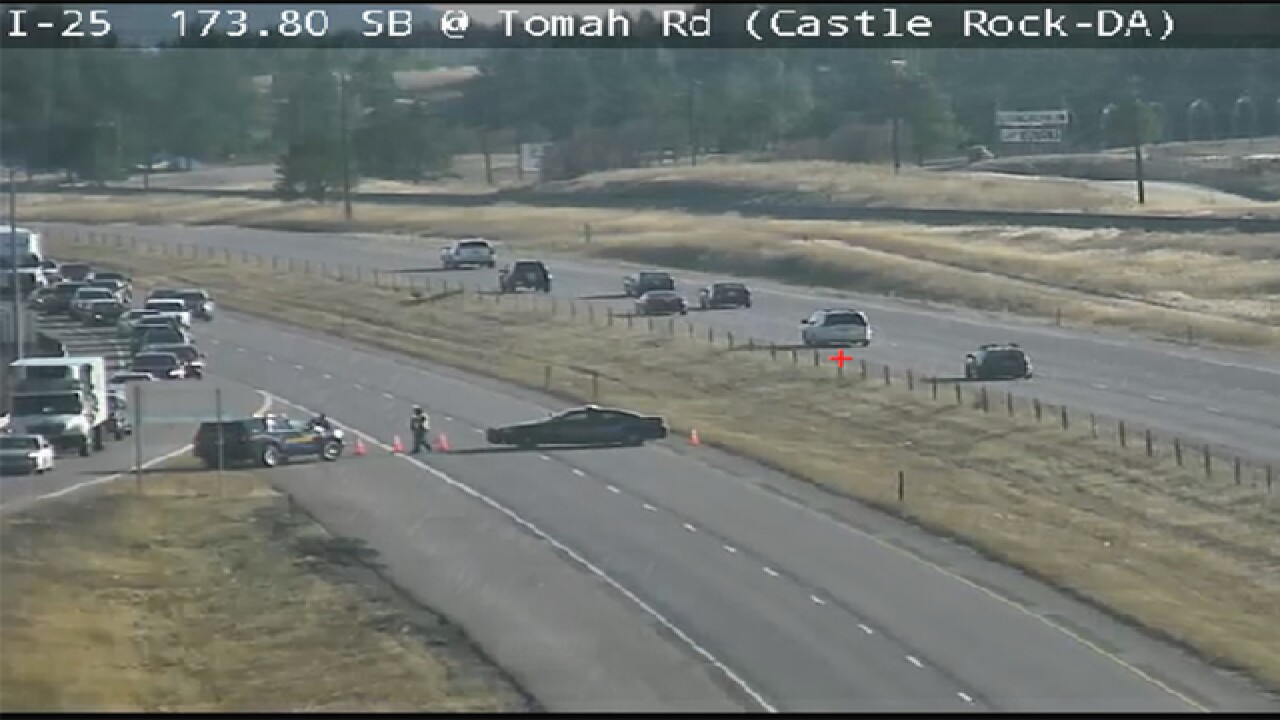 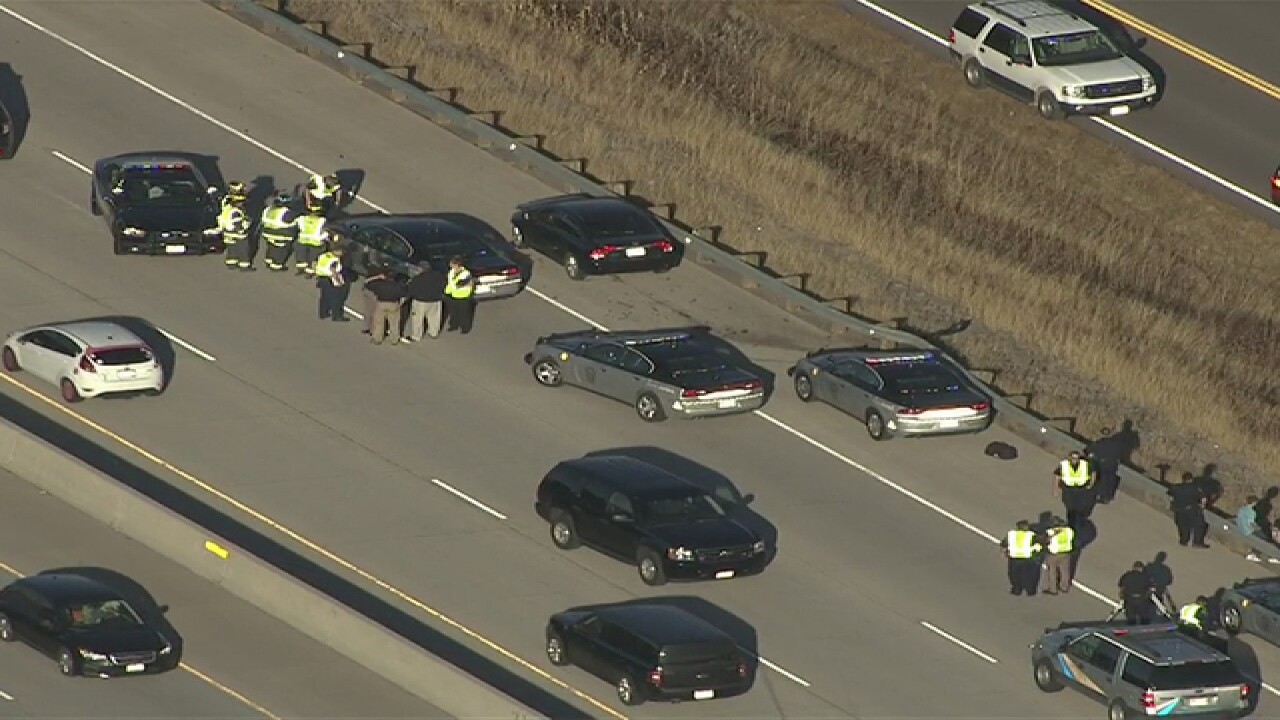 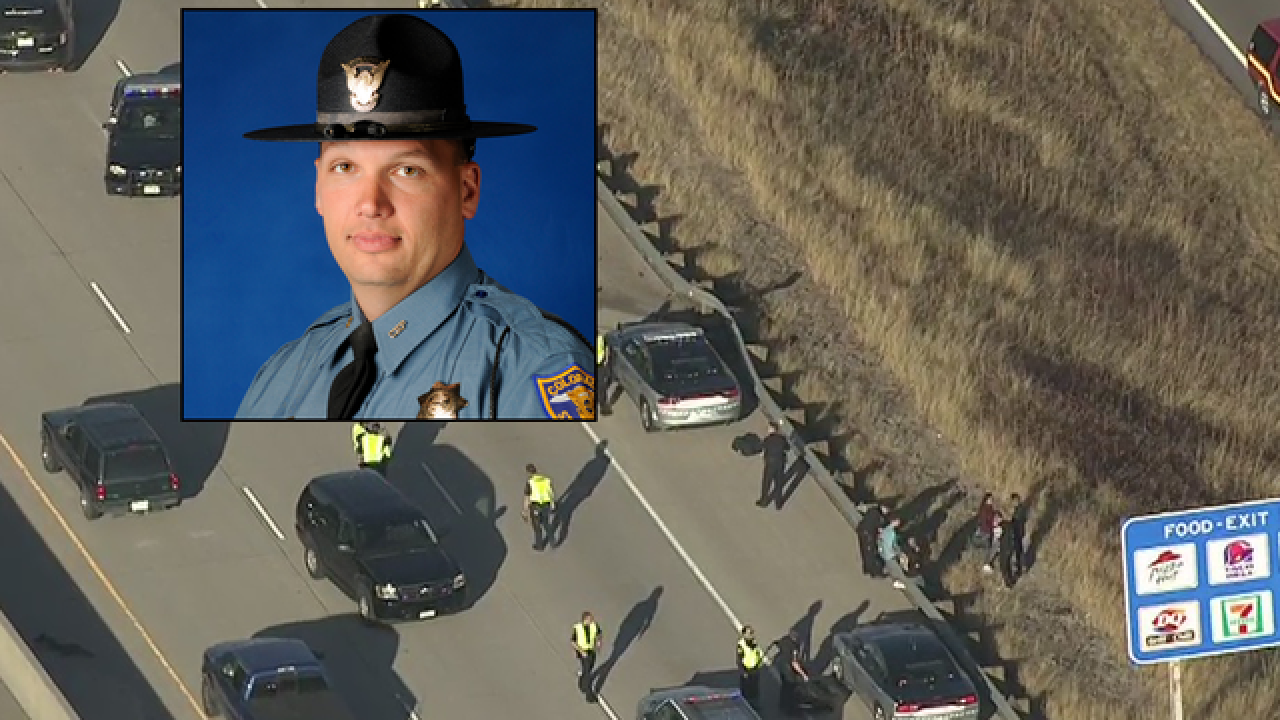 CASTLE ROCK, Colo. -- A trooper with the Colorado State Patrol was killed by a passing truck on Interstate 25 at Tomah Road south of Castle Rock early Friday afternoon.

The trooper, identified as Cody Donahue, was on the side of the interstate investigating another crash when he was struck and killed. A second CSP patrol officer was with Donahue but was not injured. Both were wearing reflective vests at the time of the crash.

The driver of the commercial food truck is under criminal investigation. He was detained at the scene. He has not been identified. Investigators are looking at video from the truck to piece together the events that led up to the crash. Deputies say the driver is cooperating with authorities and will be tested for drugs and alcohol as part of the investigation.

More than a dozen police vehicles were at the scene investigating the circumstances of the crash, which prompted the closure of the northbound lanes. Traffic was being diverted onto a frontage road at Tomah Road. Troopers anticipated the closure to remain in effect for at least five hours.

Donahue's body, draped in the American flag, was taken away in a procession of police vehicles. His dented and damaged patrol SUV was towed.

Donahue was an 11-year veteran of the force. He was stationed at the Castle Rock office and leaves behind a family including two elementary school-aged children.

"Cody from all of us in Troop 1C we bid you farewell with heavy hearts. We will miss you. RIP - Guardian, Warrior & Trooper. Never Forgotten."

Cody from all of us in Troop 1C we bid you farewell with heavy hearts. We will miss you. RIP - Guardian, Warrior & Trooper. Never Forgotten.

During a press conference, Trooper Josh Lewis said his agency is deeply saddened by the events. He said drivers need to pay more attention.

"We don't call them accidents for a reason. This was a crash. And crashes, especially like this, can absolutely be avoided," said Lewis. "It's a matter of being vigilant, watching out, taking time, and being completely aware of what's going on around you."

The truck that struck Donahue is operated by US Foods. The Illinois-based company is one of the largest food distributors in the country. Denver7 has reached out to the company but have not yet gotten a response.

Below, a map of where the crash was reported:

Our hearts are broken. We are praying for our brothers and sisters @CSP_CastleRock https://t.co/TgPcQ0Pslb

A GoFundMe account was set up by the Colorado State Patrol to help raise money for the family. The Douglas County Sheriff's Office is investigating the crash.

Similar tragedy a year ago

Jolene Jursevics says Friday's tragedy brings back a lot of emotions about losing her own daughter just a little more than a year ago.

Jaimie Jursevics was investigating a minor crash near Plum Creek Parkway on Nov. 15 of last year when a drunk driver ran into her.

Her mother hopes these tragedies sends a strong message to all drivers to move over and give our men and women in blue plenty of room during traffic stops. She also says it highlights the dangers of distracted and drunk driving.

"I know that the state patrol and the community will rally around this family like they did us; they rallied around us, and they helped us get through one of the most difficult times in our lives," she said. "To the public: be thankful; be courteous; be considerate and just please pay attention when you get behind the wheel, because people's lives depend on it."

The man who hit and killed Jaimie Jursevics, retired Army Colonel Eric Henderson, was sentenced to eight years in prison for vehicular homicide. Jursevics left behind a husband and new baby.