CASTLE ROCK, Colo – It was a nightmare after Christmas for one family in Castle Rock.

Susan Snow’s husband woke up Thursday morning to one of their most iconic decorations stolen – Jack Skellington, the main character from the movie ‘A nightmare before Christmas.’

“My husband first made him seven years ago,” Snow said. “And he’s continued to improve him and make him better.”

During Halloween, the Snow family would put out Jack in their front lawn as the pumpkin king. During Christmas, Jack would be dressed as Santa Claus.

“My husband made this with love, and he is super talented and we wanted to put it out there for everyone to enjoy,” Snow said.

But on Thursday, the Snow family woke up to the unexpected.

“My husband looked in the yard and there was something missing,” Snow said.

“The whole community came together looking for him,” Snow said. “I got people on Facebook messaging me saying I think Jack is in this park.”

And he was, in pieces. Her husband's hard work was now on the ground and broken. The suspects who stole Jack recorded the whole incident and posted it to Snapchat. 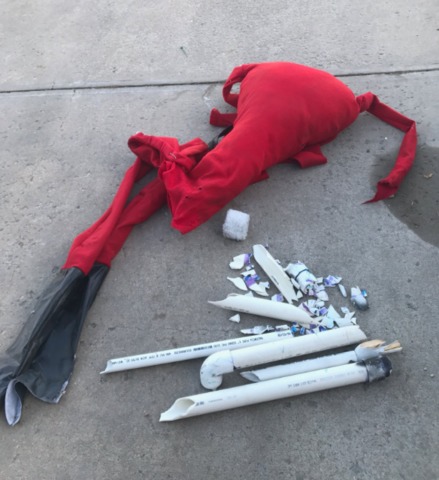 “Basically they ripped him off at the ankles,” Snow said while watching the video. “They held him outside of the car, and ran over it. I felt so sick that someone would be that malicious to do that.”

Denver7 does not know the identity of the suspects.

Snow’s son posted the video to Facebook asking for help to find the suspects. After the video picked up enough traction, the suspects went to the Snow’s house a second time to apologize.

“We listened to them and what they had to say,” Snow said. “We had a long conversation with them about consequences. I hope once they deal with the legalities of this that they really understand that it may have been fun for them, but there were true consequences to their actions.”

Snow said the Castle Rock Police Department told her the suspects are being charged with felony theft.

Snow said some good did come out of this because her neighbors want to help her husband put together a new Jack Skellington for next year.