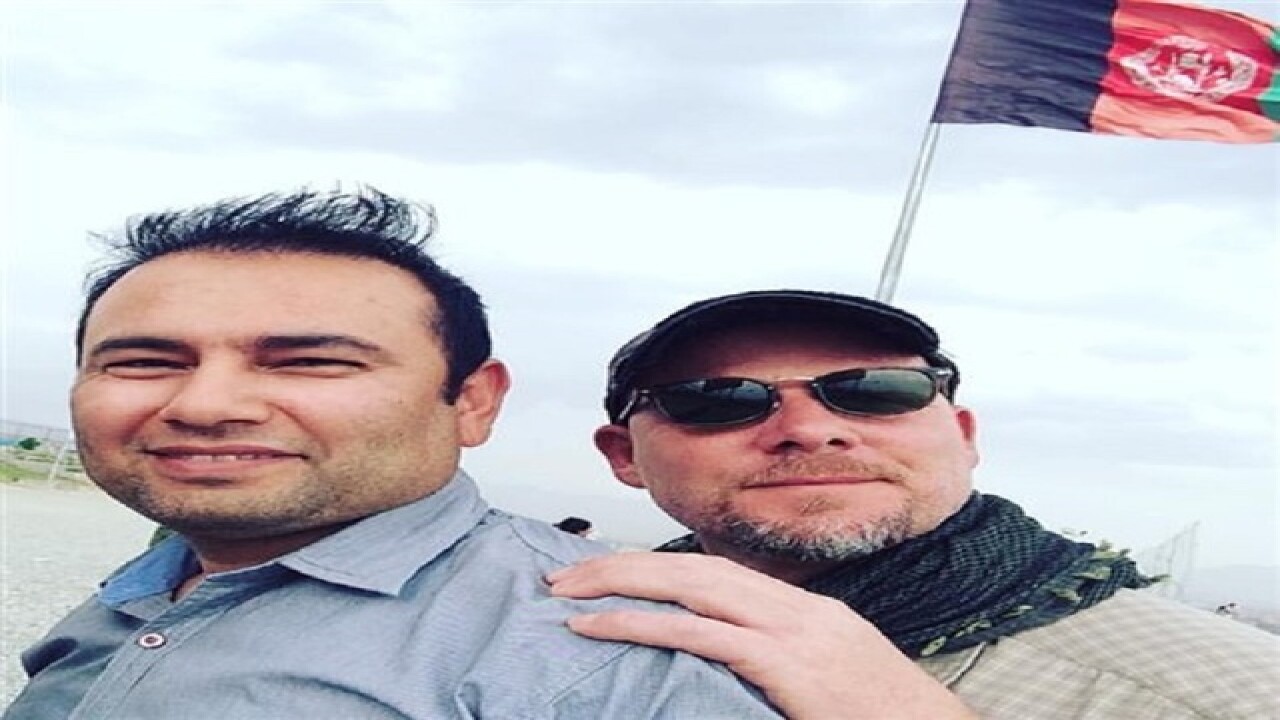 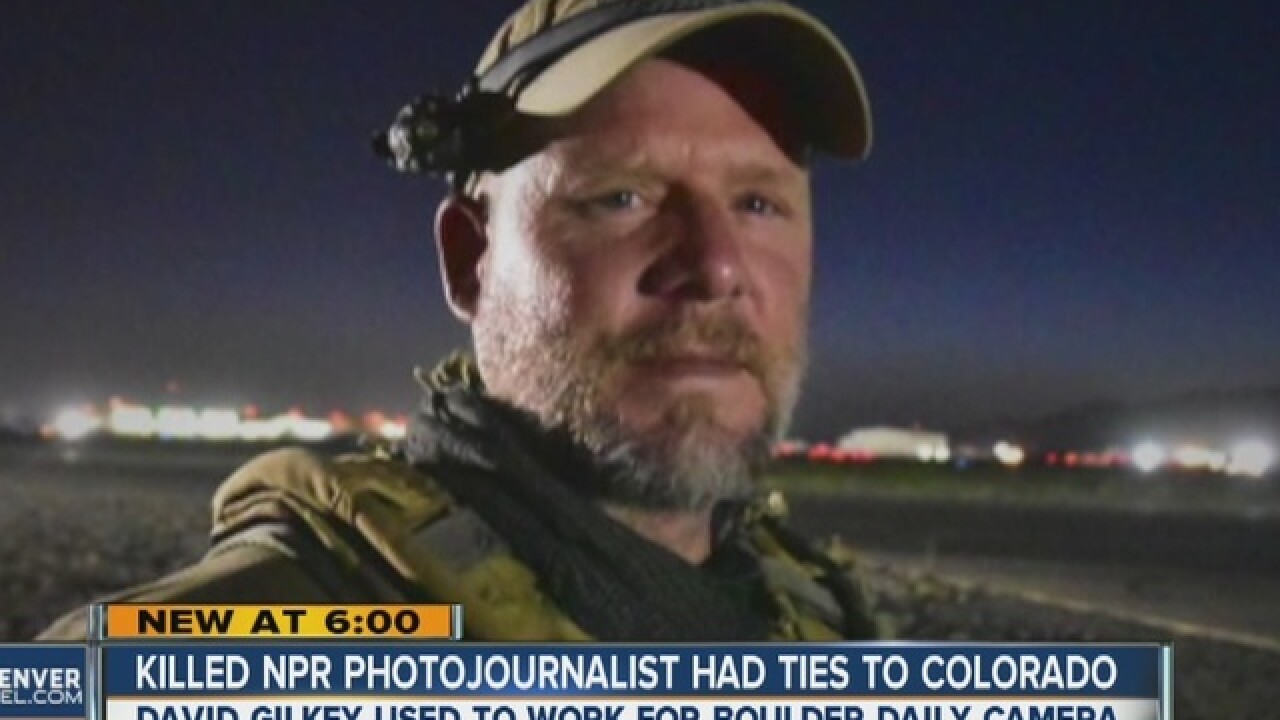 An NPR photographer who was killed in Afghanistan Sunday had ties to Boulder.

In an emailed statement to Denver7, NPR says David Gilkey and Afghan translator Zabihullah Tamanna were traveling with an Afghan Army unit when their convoy was attacked near Marjah.  Their Humvee was about a thousand feet away from the army base when it was hit by a rocket propelled grenade.

The Humvee driver and a machine gun operator were also killed.

Gilkey began working as a photographer at the Daily Camera in the late 1980s.

“He was super-talented,” said long-time Camera photographer Cliff Grassmick. “He always seemed to be right where he needed to be, pointing his camera at the right thing and pushing the button at the right time.”

Grassmick told Denver7 that he and Gilkey photographed CU’s 11-1 season in 1989.

The Buffs hosted Nebraska at Folsom Field and beat the Huskers 27 - 21.

“I told him to go up into the crow’s nest, where the Dal Ward Center is now, and he thought, ‘Cliffs putting me up there because he doesn’t want me to get the best picture,’ Grassmick said. “It turned out that fans rushed the field... They picked up some players and David did get the best picture.”

Grassmick said he knew the talented Gilkey was destined for better things.

Denver Post photographer Helen Davis Richardson said she did too.

Richardson met Gilkey when she was in the fashion business.  She had gone to the Camera to propose doing a fashion story and the editor assigned her to work with Gilkey.

“It was like a whole world opened up to me when I met David,” she said. “I was so impressed with the way he lived his life.  He always lived life outside the borders, figuratively and literally.”

Richardson, who spent six years with Gilkey, remembers covering wildfires with him behind the safety lines that fire officials would set.

“He always pushed for the better photo,” she said… “We’d go on assignments and I’d be like ‘you can’t cross that line,’ and he’d be like, ‘I don’t care, I’m going to cross that line.’”

She also remembers him as a gentle soul.

“He was quiet and he cared so much about the people he worked with and the subjects he was photographing. He never took advantage of people," she said.

She told Denver7 that Gilkey had a longing to cover stories about struggles overseas.

“One of his first travels,” she said, “was to South Africa during the end of Apartheid.”

She said the newspaper wouldn’t pay to send him there, so he paid for himself.

“He had no contacts and no reporters to work with, but he went and told the story because A) he felt it was an important story, and B) he wanted to show people in the United States what was happening.”

When asked if Gilkey ever talked about the dangers, Richardson said, “I know he knew it was dangerous.  We talked about it.”

The Post photographer said Gilkey came back to Colorado about six weeks ago, just before he went to Afghanistan.

She said she, a few photographer friends and Gilkey got together to catch up.

“I was very glad to see him,” she said, “because I always felt there was a possibility that something might happen.  I always hoped it wouldn’t.”

She said David never really talked about putting his life on the line, he was just focused on telling other people's stories.

“I think it was very hard for him to be in a situation like that and then come back to the United States, where life is usual here and people don’t really understand the trauma that’s going on elsewhere,” she said.  “I think he struggled with that.”

Grassmick said Gilkey only alluded to the danger once.

“He showed a bullet hole in one of his cameras and said, ‘you know, it was that close,’” Grassmick said. “He didn’t talk much about the danger of what he was doing.  I think he was going to do that no matter what.”

Richardson’s eyes teared up when I asked how she is coping with the loss of her friend.

She said she was heartened to see the outpouring from people whose lives David touched.

“People in Africa, Afghanistan and Iraq are posting about what David meant to them,” she said.

An anonymous American veteran posted a note that said in part: “We send our servicemen and women all over the world and they die and we forget.  What this team of journalists have done is make us see it through their work.”

In an emailed statement to Denver7, NPR’s Senior Vice President of News, Michael Oreskes, said Gilkey had covered conflict and war in Iraq and Afghanistan since the Sept. 11, 2001 attacks on Washington and New York and was committed to helping the public see the wars and the people caught up in them.

Grassmick told Denver7 that he always thought of Gilkey as a person who was going to go to these conflicts and not get a scratch.

When asked if Gilkey sought the adrenalin rush of dangerous assignments, Grassmick said, “Not necessarily. He was pretty complicated.  He was kind of an acquired taste.  In the beginning, I thought he was a little cocky and over the top, but then he was quiet too.  And once you got to know him, you really liked him and felt some bond with him that’s hard to explain.  But you were glad that you were his friend.”